As is the case with the other Best of TV lists I’ve published this week, my selections for best drama aren’t intended to be a set-in-stone ranking that will carry through to the end of the year, but rather a snapshot of the titles I think about and talk about most often whenever the subject of current TV comes up. Mad Men nearly made the list, despite a rather shaky start, because its recent run of episodes has been so strong, and I’d be very surprised if Breaking Bad stumbled so badly upon its return that I stopped mentally saving it a space. American Horror Story overlapped 2012 and 2013, and was demented and committed (no pun intended!) enough that I thought about including it as well. In the end, I decided to close out my Best of TV selection with these five deserving dramas. 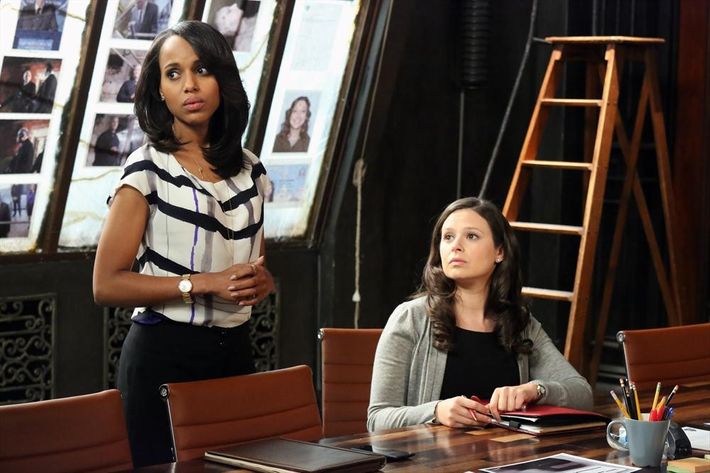 5. Scandal (ABC)
As deliriously soapy and ridiculously fun as a drama can be while still having plenty on its mind. For more superlatives, see my Best of TV post for Most Improved Show and my review of Scandal’s second season. 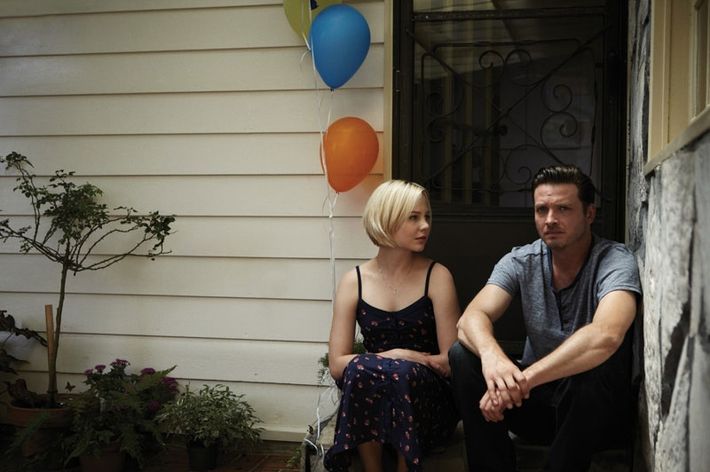 4. Rectify (Sundance)
At a time when TV producers seem to be in a footrace to see who can pack the most plot into an hour, this series about a recently released death-row inmate sprung from prison on a technicality is patient enough to take its sweet time telling its story. It’s also confident enough to let its characters work through conflicting ideas about innocence and guilt, and about justice and injustice, in elaborate exchanges reminiscent of live TV dramas from the fifties. My review of the first few episodes is here.

3. The Americans (FX)
I had no intention of recapping this drama about Soviet spies and FBI agents in early-eighties Washington until I saw the pilot and the second episode, which proved that it was much more than a Homeland wannabe. Subsequent episodes confirmed my early enthusiasm. Obsessing over it each week has been one of the year’s true pleasures. While it’s still finding its footing, this series is an engrossing examination of marriage, partnership, and loyalty, as well as espionage. Also, wigs. And eighties pop. And sex. And wigs. 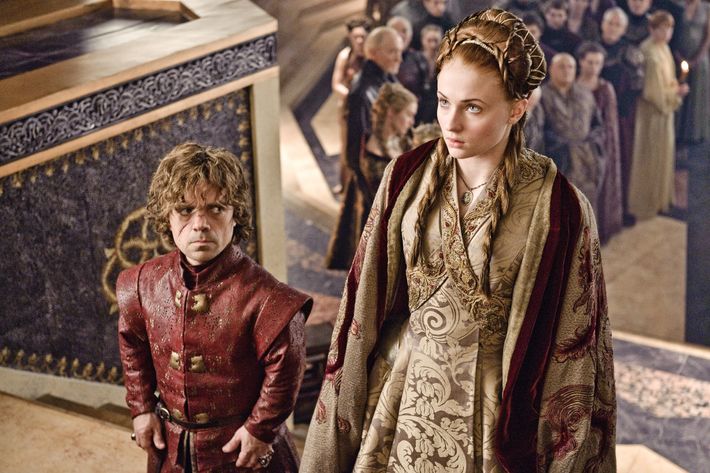 2. Game of Thrones (HBO)
Magisterial and tight, gloomy and exuberant, nasty in some ways and incredibly square in others, this adaptation of George R.R. Martin’s fantasy books just completed what, to me, was its most assured season to date. 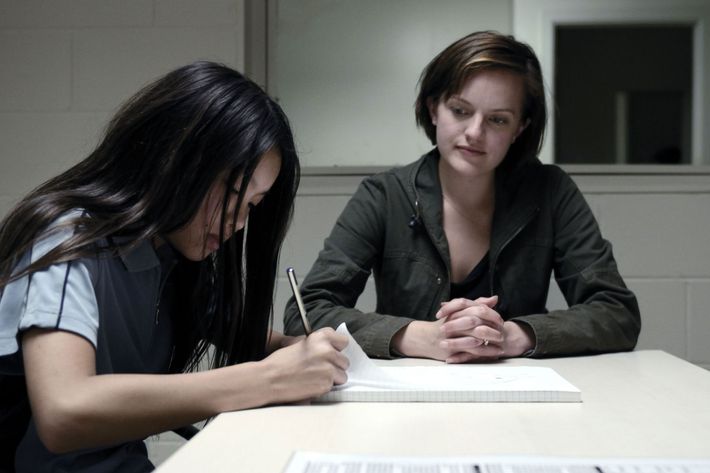 1. Top of the Lake (Sundance)
Aside from the disturbing imagery and feminist messages that are the stock-in-trade of showrunner Jane Campion (Sweetie, An Angel at My Table), I didn’t know quite what to expect from this limited-run murder-mystery series, other than the impressive résumés of three of its stars — Mad Men’s Elisabeth Moss, as a cop investigating a disturbing crime in her old hometown; Scottish actor Peter Mullan, as a woman-hating bully; and Holly Hunter, as a mysterious and abrasive white-haired feminist guru. But the series delivered arguably Campion’s most focused and unrelenting examination of the war between the sexes and the psychic wounds it inflicts on individuals and their communities.

5 Best Episodes of the Year

SEE ALL BEST OF TV »

+Comments Leave a Comment
Seitz: The 5 Best TV Dramas of the Year

qu'est-ce que c'est? 6 mins ago
When Wet Leg Met Wet Leg Superfan David Byrne The breakout indie-rock duo and former Talking Heads frontman discuss the perils of fame, the genius of “Psycho Killer,” and being specks of dust.
the grub street diet 6:00 a.m.
L Morgan Lee Searches for the Joy in Dinner “I had my first bite and felt my spirit start to stir.”
By Zach Schiffman
last night on late night 12:59 a.m.
Watch Megan Thee Stallion Write Some Thank You Notes With Jimmy Fallon As part of her guest hosting gig on The Tonight Show.
my single is dropping 12:21 a.m.
Nicki Minaj’s New TikTok Fave Single, ‘Super Freaky Girl,’ Is Out She’s alright.
new music friday 12:01 a.m.
Megan Thee Stallion Drops Traumazine Early As a ‘Plan B’ No complaints here.
accidents Yesterday at 11:48 p.m.
Anne Heche Is Not Expected to Survive After Car Crash Brain Injury She is currently being kept on life support to determine if her organs are viable for donation.
overnights Yesterday at 10:40 p.m.
Pretty Little Liars: Original Sin Recap: Leave It All on the Floor The girls are having confabs, chasing down bonkers leads, and kissing crushes in Original Sin’s strongest episode to date.
tweet then delete Yesterday at 9:34 p.m.
Michelle Branch Announces Her Separation from Black Keys’ Patrick Carney “The rug has been completely pulled from underneath me and now I must figure out how to move forward,” said Branch.
overnights Yesterday at 9:00 p.m.
Southern Charm Recap: Puppy Love Austen is sad because his own antics have caught up with him.
overnights Yesterday at 9:00 p.m.
Rap Sh!t Recap: Catching Flights, Not Feelings The triumphant NYC trip doesn’t go as planned.
accidents Yesterday at 8:05 p.m.
Anne Heche in a Coma, Under DUI Investigation, Following Car Crash According to a representative, she has remained in a coma since shortly after the accident.
we bought a zoo Yesterday at 6:53 p.m.
Would You Still Love Jessica Chastain If She Were a Worm? Oscar Isaac compared his and Chastain’s chemistry to flatworm cells, obviously.
"not this" -a Yesterday at 6:36 p.m.
Um, the PLL: Original Sin Producers Say It ‘Exists in’ the Riverdale Universe Why? lol
objection! Yesterday at 6:30 p.m.
The Aretha Franklin Documentary Producer Is Suing Neon ‘Amazing Grace’ took 40+ years to come out, only to be buried, per the lawsuit.
all hail Yesterday at 6:00 p.m.
Brandy’s Cinderella to Air on ABC, No Streaming Subscription Required Bibbidi-bobbidi over to broadcast television for a reunion special on August 23.
courthouse hottie Yesterday at 4:03 p.m.
What’s Up With Megan Thee Stallion’s Messy Label Legal Battle? Thee Hot Girl hinted that 1501 Certified could be behind the Traumazine leaks.
last night on late night Yesterday at 3:32 p.m.
J. Smith-Cameron Should Have Thrown Two Drinks in Kieran Culkin’s Face She employed a three-strike rule.
overnights Yesterday at 3:08 p.m.
Harley Quinn Recap: Swamp Cling It’s not easy being green … or, in Ivy’s case, accessing the green.
ask an expert Yesterday at 2:57 p.m.
Where Do Georgia Music Festivals Go From Here? Music Midtown in Atlanta was reportedly scrapped over a ruling that allowed guns during events on public property.
buffering Yesterday at 2:33 p.m.
Why Disney+ and Hulu Just Got a Lot More Expensive Less bang for more bucks.
More Stories