Readers should know that the June-to-June time frame for Vulture’s inaugural Best of TV celebration means that the following list of best episodes is necessarily a partial one and should be viewed as a work in progress accordingly. I purposefully did not include any episodes that aired before December 2012, as I already covered those in two rather exhaustive year-end lists: one on comedies and one on dramas, together totaling 50 picks. So I guess you should consider this a snapshot of what’s on the dry-erase board over my desk: a running list of episodes that I liked enough to want to keep in mind for when I make this December’s longer, year-end list. Right now there’s an excellent chance that all of the picks below will make a return appearance on the 2013 countdown, but you never know: A lot of promising shows are set to air between now and then — Breaking Bad, to name just one.

5. Girls, “One Man’s Trash”
My favorite episode of Girls’ second season, this one felt like the show’s version of a bottle episode, with heroine Hannah (Lena Dunham) tracing the arc of a relationship with a doctor (Patrick Wilson) while spending a couple of intense days in his lavish townhouse. The fact that the action was cut off from the rest of the regular characters gave the proceedings a dreamlike feel, and made some viewers speculate that perhaps it was just a dream, or a fantasy, or in some way more figurative than real.

4. Game of Thrones, “The Bear and the Maiden Fair”
Season three demonstrated an even more impressive ability to hopscotch between parallel story lines than in years past, but this episode might be the best example of Game of Thrones’ adept ability to juggle plot points. Every scene, every shot, every line just struck me as perfectly judged, and I can’t say enough good things about the direction (by Michelle MacLaren, who I’ve written about in so many different pieces here — particularly with regards to her work on Breaking Bad — that you’re probably tired of hearing me talk about her). This episode also showcases the highlight of the Jaime-Brienne story line, in the form of a tense scene set in a bear pit. It’s one of the best character-driven action set pieces I’ve seen in a long time.

3. 30 Rock, “Finale”
A masterful end to a great sitcom, this send-off was everything you could possibly want from a series finale. It was hilarious and self-deprecating, and affecting without getting too soggy. As I wrote in a New York magazine appreciation, “30 Rock is uniquely skilled at eating its cake and having it, too, while crowing ‘Isn’t cake ridiculous?’ and making you crave cake.” 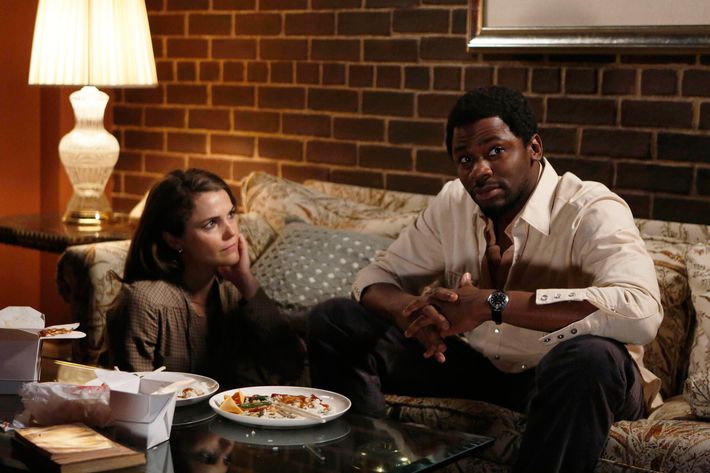 2. The Americans, “Gregory” and “Only You”
I’m cheating a bit here by listing two episodes in one entry, but if you’ve seen them both you understand why. (Note: If you have never watched the show, you probably shouldn’t click through to read the recaps!) The Americans is a wonderful example of serialized narrative playing out over the course of a season, with each new chapter building on the last, but I suspect that if you pulled these installments out of context and showed them as a self-contained mini-movie, they’d still be coherent and hugely engaging. They’re built around the most fascinating supporting character I’ve seen on a drama this year: Derek Luke’s Gregory Thomas, the African-American former civil-rights worker turned KGB operative who was secretly the lover of the show’s heroine, Soviet spy Elizabeth Jennings (Keri Russell). When I think about this character, I hear early-seventies Marvin Gaye music in my head. The dreams and disappointments of the sixties, particularly of politically active black Americans, are inscribed on his knowing, skeptical face. He’s just a brilliant creation — and his mournful obsession with Elizabeth is one of the best-ever televised portraits of a love that was meant to be, but can’t be.

1. Downton Abbey, “Part Five” and “Part Six”
I’m cheating here, too, but these two episodes also feel like a stand-alone two-parter, with the second part answering and completing the first. “Part Five” contains a truly horrifying death, one that combines the historical and personal aspects of Downton Abbey, in that the death very likely wouldn’t have happened if Lord Grantham hadn’t been so hopelessly enamored with tradition, favoring a physician who treated the Royal Family over the local doctor who has been studying his family’s health for decades. The follow-up shows how a family can begin to recover from such a devastating loss: in part, by constructing a new, shared narrative based on an illusion that allows for forgiveness. As the Dowager Countess puts it, memorably and honesty, “Lie is so unmusical a word.”

SEE ALL BEST OF TV »