As a society, we’ve learned not to expect too much of a midget pony. Yes, most of us agree that midget ponies look terrific. But say one of them clip-clopped up to the rolled-down window of your El Camino and began to speak articulately about theology or civil rights or the importance of family? You’d have to admit: that would be pleasantly surprising. Guys, it’s the same thing with True Blood. Right when we stop expecting intelligence from this show, sometimes an episode like “The Sun” clip-clops up to the open window of our proverbial El Camino and spits mad wisdom. This was a surprisingly good and thoughtful episode of True Blood! Except for the super-dumb parts, in which case it was like, “Okay, run along now, midget pony. That’ll do.” 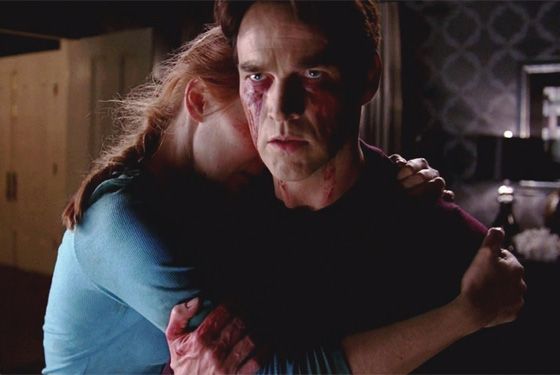 Say what you must about Bill’s conversion to a whatever-he-is: This is the first time his plotline has been interesting in what feels like years. This episode served to subvert many of our expectations about what his current deal is. First off, by her own definition Lilith is not the vampire god nor a god at all. As she explained to Bill during his fugue-state hallucination, Lilith was no more divine than Adam or Eve. She also explained there is only one God and He/She/It roots for both humans and vampires alike. Further, Bill’s role as Lilith reincarnate has less to do with becoming some kind of blood tornado and more to do with becoming a savior to vampires in distress. Or something? It wasn’t clear yet! One of Bill’s new powers is the ability to predict future-crimes against vampires, sort of like in Minority Report but with fewer weirdos. The stinger? He immediately envisioned many of our favorite characters (including Jessica, Eric, and Pam) being rounded up, dressed in crisp white outfits, led into a chamber, and then executed en masse. Yes, True Blood went THERE. Putting aside the questionable Holocaust allusion, the main idea was that Bill was now poised to become more of a superhero than a villain, which, okay. That’s actually pretty compelling right there. 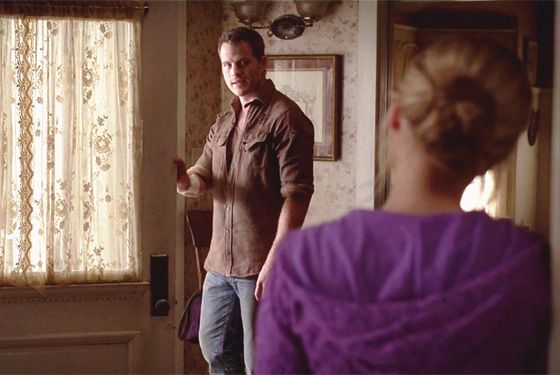 Speaking of compelling, everybody knows that the No. 1 best story line in all of True Blood is the faerie stuff. Ha-ha, just kidding, the faerie stuff is boring garbage now and forever. HOWEVER, credit where credit’s due: This week Sookie dealt with tons of faerie stuff and it wasn’t as horrible as usual! First of all, she met an injured halfling-faerie hunk on her way to work (she initially tried to ignore the man moaning in the bushes because enough already). After Sookie reluctantly took Ben back to her house and nursed him back to health, they bonded over their common faerie abilities. For a character who’d become knowingly wary of new supernatural hunks, it still felt very believable that Sookie would cotton to this ruggedly handsome narrative interloper so quickly. He was charming! And handsome! And can hang out in the daytime NBD! 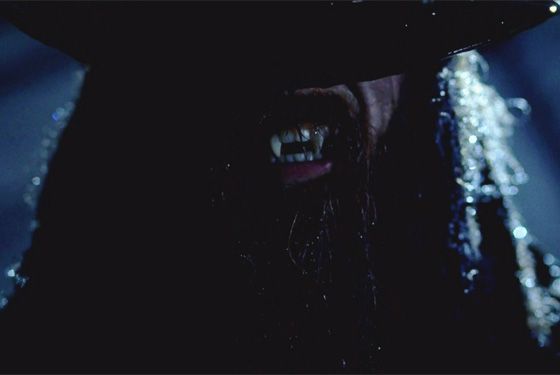 In other faerie news, as most people suspected, Rutger Hauer was not actually Warlow, but was instead Niall, the Stackhouses’ “faerie grandfather.” He’d arrived to protect them from Warlow, and just in time, too: A particularly frightening cold open showed Warlow ripping a hole in the fabric of space to enter Bon Temps, and to be honest, it looked like his beard smelled so bad. Like wet-dog-bad. Anyway, the real Warlow was now here, and according to Niall, Sookie’s only hope in defeating him is using a sort of self-generated faerie A-bomb that would destroy any vampire but drain all of Sookie’s powers permanently. I’m excited that Sookie will be losing her powers soon, because she definitely WILL use this thing, right? It’s basically Chekhov’s Gun except mind-numbingly ridiculous. 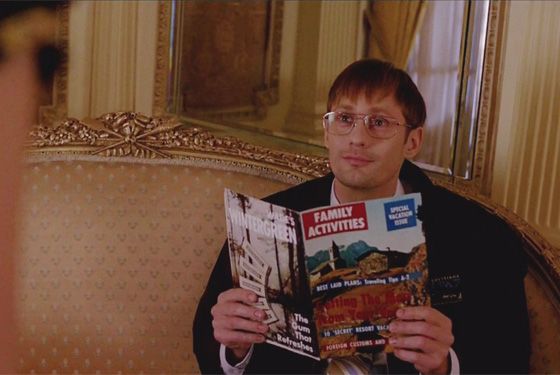 In the time since his love triangle was officially disbanded, Eric’s come untethered from the story a bit. But rather than take some kind of vampire vacation at a tropical vampire resort, Eric immediately shifted into all-purpose hero mode and arrived at the governor’s mansion to do some vampire lobbying (via brain laser). This meant he engaged in the time-honored tradition that nobody ever does in real life of bludgeoning a random guy and assuming his identity to sneak into a heavily guarded office. That’s how we came to experience Nerdy Hunk Eric in which an undeniable hunk tried and failed to look nerdy. Still, it was all pretty charming, just unfortunately not in the literal sense, because it turned out the governor was glamour-resistant thanks to some special contact lenses. Also, his guards’ bullets were made of both silver and UV light, meaning the humans were starting to develop some pretty wicked new weapons against vampires. Ultimately, Eric’s abilities were still better: He flew away from his captors then later glamoured the governor’s daughter into allowing him entry to the mansion. Advantage: hunky nerd impersonator. 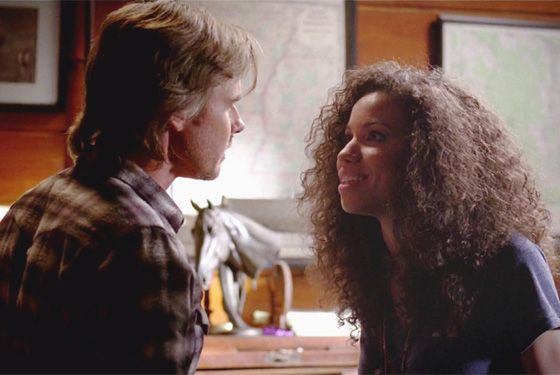 Oh, so here’s what I meant when I said True Blood got surprisingly eloquent this week: It happened during the Sam plotline (!) when he was confronted at Merlotte’s by a gorgeous civil rights activist played by Jurnee Smollett from Friday Night Lights. She claimed to be a descendant of original Freedom Riders, and she wanted to see Sam and the rest of the shifters “come out” so as to make humans aware of the full spectrum of non-humanity in their midst. She and Sam debated at length about whether shifters would be better off hiding in shadows or living loud and proud, and both sides made good arguments! The racial parallels continued later in the episode when werewolves stole Luna’s daughter away from Sam, citing ethnic propriety or whatever. The most shocking aspect of this scene, however, was that it made Alcide seem borderline villainous? And don’t get me started about how his new ladyfriend beat up Lafayette real bad. That was almost too upsetting to describe. Let us all now pray that that lady dies a grisly death because DO NOT touch Lafayette. 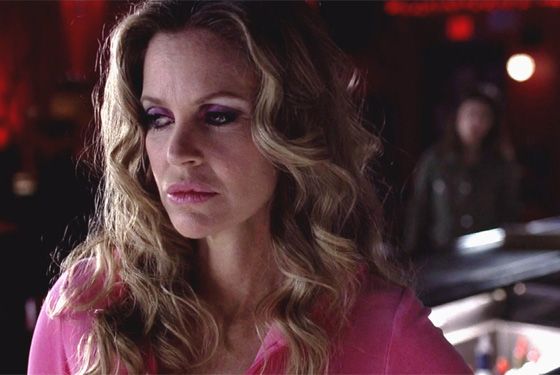 Not much happened between Pam and Tara this week; after Eric dug an aforementioned UV bullet out of Tara using a broken bottle (!), Pam and Tara sat in uneasy silence. Once again, Pam and Nora bickered, but this time Nora made a moving statement about how much Eric loves Pam and how much he used to brag about her to Nora. It was a tiny moment, but moving nonetheless. Personally, I haven’t loved seeing Pam be so whiny and emotionally volatile lately, so it’s a testament to how good her character is that I’m still totally into it. Pam 4 President. 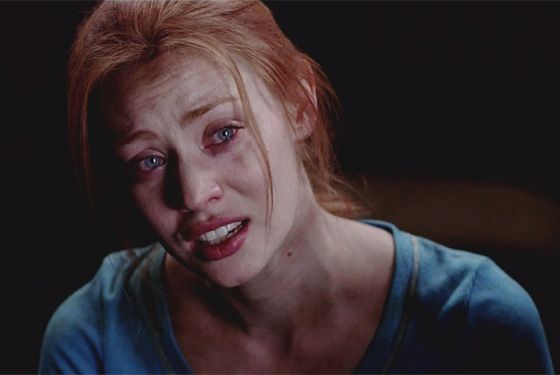 “The Sun” presented a nice spectrum of promising developments, but by far its best moment was Jessica, distraught and panicked at the feet of a comatose Bill (he’d just sucked all the blood out of a blood hooker), praying to God for guidance. It was an emotional and clever bit of writing; as she prayed for each of her friends, the camera cut to each character, thereby tying together a show that so frequently feels disjointed and unwieldy. Dang, Jessica even threw in a shout-out to Hoyt! It was surprisingly moving, and a good reminder of just how invested we’ve become in these characters over the years. 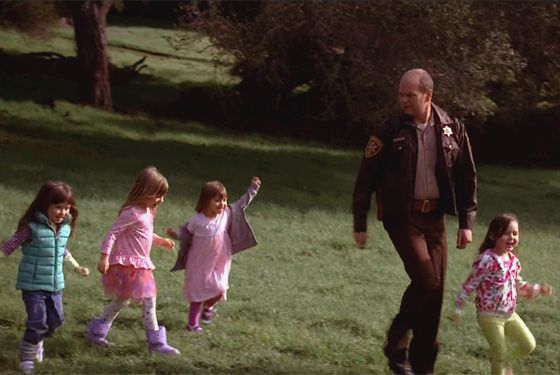 Oh and Andy took his children to a field, and Arlene hugged Terry’s dead friend’s widow. Which, fine, it was another nicely done emotional moment, but still. Beat it, Ifrit plotline.

Guys, as far as early season episodes of True Blood go, this one felt solid, cohesive, fun, and surprisingly thoughtful. I’m not sure we should expect better of this show, but guess what? A few more episodes like this and we may just have to.