ABC’s new reality series Whodunnit? might end up being one of the best things on television this summer. In the show, which premiered last night, thirteen contestants are tasked with finding a killer in their midst. The survivors must search a large mansion for clues, decide whom to trust, and then dress up like it’s a Bachelor rose ceremony and present their suspicions. Whoever is the wrongest is killed (but not really!) and each week’s episode has the rest of the housemates attempt to solve the crime. Sounds fun, right? Here are a few more reasons why Whodunnit? will be much more fun to watch than anything else this summer:

All the reality clichés, and yet none of the reality clichés.
Sure, no one is “there to make friends,” but you most likely won’t see any actual physical fighting among the Whodunnit? contestants. No one’s gonna get into a fight for the “room with the hot tub” or hook up behind the haunted tool shed. This is a game and we’re here to play it. “It’s the introduction of reality fiction,” says the show’s executive producer, Anthony Zuiker, whose other TV success stories include CSI: NY and CSI: Miami. There’s also a drama about a reality show airing this summer that also falls under the umbrella of “reality fiction,” but it feels a bit Survivor for my taste.

Murders that are supposed to look fake, because they are fake.
One of the funniest things about Whodunnit? is that the contestants repeatedly mention that they are “fighting for their lives” even though it’s obvious that they are not. For those of us squeamish about TV’s love affair with serial killers, the dramatic fake deaths on Whodunnit? are a nice break.

The “killer” has a Twitter account.
I’m not saying this is a good thing, but it’s definitely a thing:

Liar, liar, pants on fire. Don’s not so SECRET past is catching up to him. Nice guy? Or is he playing these girls like a fiddle?

A group of contestants whose suspiciously suspect job titles should be good enough for them to start their own detective agency.
TV Crime Reporter? Insurance Investigator? Ex-Homicide Detective? Homeland Security Advisor? This is a regular crime-solving Dream Team and yet they all seem to be collectively stumped by the Clue-like excess of hints. Was it Kam in the kitchen with the slingshot? Maybe. That isn’t to say there aren’t some typical reality-show job titles on Whodunnit? — just a bit too many people with germane job experience. 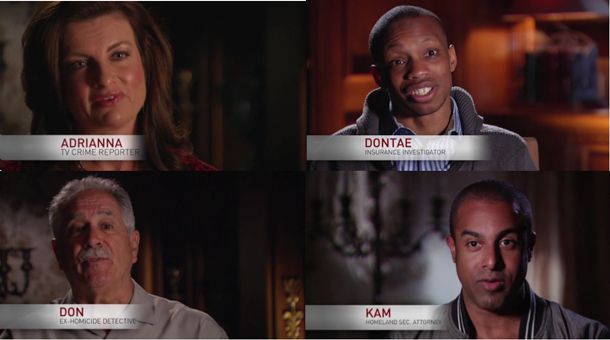 Just another good reason to bring back The Mole.
With Edward Snowden on the run and Whodunnit? on TV, there is no time like the present to bring back ABC’s other reality game show: The Mole. After getting canceled right before its sixth season, fans sent candy Lemonheads to ABC in protest (a reference to the fifth season, in which “Moletestant” Paul drew a face on an actual lemon and turned it into a mascot). The Mole’s premise (game show; problem solving) made it fun to play along. In a slightly sillier way, so does Whodunnit?

book review 2 mins ago
Either/Or Is a Coming-of-Age Story That Moves at the Speed of Thought Either/Or is a sequel to Elif Batuman’s campus novel The Idiot — and it reveals what she’s been up to this whole time.
By Sarah Chihaya
victim of cable 12:38 a.m.
Sir Elton John Can’t Watch The Real Housewives Quick! Someone share their login with him!
architectural digest tour when? 12:03 a.m.
It’s Time for the Grand Tour of Harry’s House Harry Styles’s third solo album is wide open.
roy family method Yesterday at 10:52 p.m.
Succession’s Matthew Macfadyen Doesn’t Find Method Acting ‘Useful’ “It’s not about what I’m feeling or what state I’ve got myself in before, or any of that.”
overnights Yesterday at 10:50 p.m.
Atlanta Season-Finale Recap: Bread Up Atlanta ends the season with Van at the center of a demented episode of Emily in Paris.
overnights Yesterday at 7:52 p.m.
The Flight Attendant Recap: Double Trouble An all-out plot bonanza of an episode can’t land the reveal we’ve been waiting for all season.
truth or dare Yesterday at 7:45 p.m.
Charlie Cox and Vincent D’Onofrio May Dare to Return to Daredevil A revival is reportedly in the works at Disney+.
cannes 2022 Yesterday at 5:34 p.m.
So, Uh, Jessica Chastain Plays Donald Trump’s Sister in Armageddon Time Alongside her friends Anne Hathaway and Jeremy Strong.
vulture recommends Yesterday at 5:12 p.m.
Lords of Synth Plays a Loving, Razzing Tribute to Vangelis Honor the late synth pioneer by making fun of him.
jealousy jealousy Yesterday at 4:50 p.m.
Ellen Barkin Calls Ex Johnny Depp a ‘Jealous Man’ “I never heard from him again after that.”
rip Yesterday at 4:24 p.m.
Vangelis, Blade Runner and Chariots of Fire Composer, Dead at 79 The composer was best known for his sweeping electronic scores.
unravelings Yesterday at 3:59 p.m.
Johnny Depp Couldn’t Get His Shit Together, Ex-Agent Testifies Amber Heard’s witnesses describe her ex-husband’s apparent unraveling.
overnights Yesterday at 3:58 p.m.
Under the Banner of Heaven Recap: There Will Be (More) Blood The search for the Lafferty brothers just got a lot more urgent.
oscars 2023 Yesterday at 3:57 p.m.
Oscars Declare COVID Over, Require Theatrical Release Again For the past two seasons, films could qualify by playing on the Academy’s in-house streaming platform.
refresher course Yesterday at 3:42 p.m.
Get Reacquainted With Drag Race All Stars’ Winners’ Circle One of these queens will be the show’s first two-time winner, so it’s time to brush up on what each has to offer — and what they lack.
fact or fiction? Yesterday at 3:36 p.m.
The Staircase Uncovers New Questions Within Tired True-Crime Theories The HBO Max miniseries uses the freedom of fiction to explore the mysteries surrounding Kathleen Peterson’s death.
buffering Yesterday at 3:00 p.m.
Can Stranger Things Reverse Netflix’s Bad Headlines? The stakes are higher than ever for the show to succeed.
backstories Yesterday at 2:50 p.m.
How Vangelis’s Cult Blade Runner Score Became a Classic The Greek composer’s work on Ridley Scott’s epic was a lodestar, marking a course open to individual interpretation.
overnights Yesterday at 2:47 p.m.
Conversations With Friends Recap: Can We Talk? Now that Melissa knows about Frances and Nick, it’s time for an interesting arrangement.
bearded bromance Yesterday at 2:38 p.m.
Jake Johnson Wants to Make a Movie With Oscar Isaac — I’ve Got a Few Ideas INT. DIMLY LIT BEDROOM - NIGHT
More Stories