As Game of Thrones meet-up groups go, the Brotherhood Without Banners towers over other collectives of George R.R. Martin obsessives like the Mountain That Rides standing next to Tyrion. After all, the big man himself — Martin, not the brute also known as Gregor Clegane — has partied at conventions with the club’s members. Possibly the only drawback to being so visible within the community of “The Song of Ice and Fire” enthusiasts who organize gatherings in real life? Having a target on your back at any and all Game of Thrones bar trivia competitions.

Last month in Manhattan, I had the good fortune to partake in a big-stakes trivia event cooked up by Random House, the U.S. publisher of Martin’s “A Song of Ice and Fire” book series, as an honorary member of the Brotherhood Without Banners. Drawing its name from a band of altruistic outlaws in the novels, the group formed back in 2001 at the annual World Science Fiction Convention, or WorldCon, after special guest Martin mock-knighted a few attendees who’d joined him on an after-hours cheesesteak quest. Admission into the Brotherhood is freely given to hardcore and casual ASOIAF fans alike, and the online member tally is somewhere around 40,000 worldwide, but, as I learned at a BWB pre-party, only a handful of members with intimate knowledge of Martin’s best-selling series showed up — although the turn-out may have had more to do with the opportunity to drink beer with like-minded geeks than flaunting book smarts.

One of the competitors was the club’s leader, Martha Harbison, an outgoing, chatty woman from Brooklyn; she and her quiet, introverted husband, who goes by the message-board moniker Mr. X, introduced me to more than a dozen fellow members from the New York area. Given how near and dear the group is to Martin — not only does the author frequently attend the Brotherhood’s WorldCon parties, but his wife, Parris McBride, had left an encouraging note on the BWB message board prior to the meet-up wishing “sharp memory-retrieval to all!” — I would have thought the pressure to perform well at the event would be great. Not so, and in fact, despite how impressive the members’ collective knowledge of the “ASOIAF” universe had to be, they obviously saw the competition itself as yet another worthy excuse to get together. “We’re going to come in dead last,” predicted Martha, with a laugh. “We’re not competitive whatsoever. It’s going to be all about drunken showboating!” 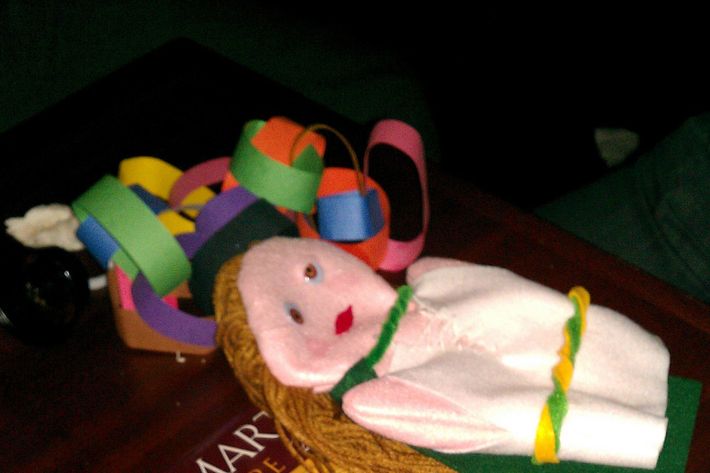 Because the contest capped the number of players per team at six and nine BWB members had signed up for the event, we had to split into two squads, each with its own punny bar-trivia name. Martha and Mr. X had previously decided that their sextet would be called Maesters of Puppets, a nod to the couple’s shared love of Metallica, and to hammer home the reference, Martha had made simulated maesters’ chains out of colored construction paper, while an artist doing business under her Tolkien-inspired board name Turinqui-Calima had crafted felt puppets representing Daenerys, Tyrion, Euron Greyjoy, Jon Snow, Grey Wind, and Margaery. And my team of three was dubbed the Hot Pies, because of our fondness for Arya’s chunky pal Hot Pie and for delicious dessert items. With our teams set, we were ready to throw down … more beer. At some point, while we were halfheartedly quizzing each other about the names of Dany’s dragons and other “ASOIAF” factoids, the direwolf puppet had his way with the Margaery one. (Kids, don’t drink and puppeteer.) Comfortable and even downright cocky with the knowledge that there’s no way we would win anything other than a prize for being the most giggly participants, we set off for the main event.

As we arrived at the trivia proving grounds (i.e., a two-story midtown bar called Slattery’s), we quickly learned that the sold-out event had attracted some hardcore Thrones geeks, who’d be doing battle using team names like Operation Dothraki Freedom, the Iron Price Is Right, Let Aegons Be Aegons, Ramsay’s 50 Shades of Greyjoy, Crows Before Hos, and the Holy R’hllors. We also learned immediately that other teams had done way more homework than we had, and that having just three Hot Pies was folly. By contrast, each guy in Five Starks and a Bastard, the fully-staffed and awesomely named team sitting across the aisle from us, had been assigned to reread one of the books in the series before the event, and that still left room for one floater. Clearly, we were outflanked. Might we get points if we just answer everything with “Hodor!”?

“It is time for battle!” announced the evening’s host, Dave Oliver of event co-sponsors Trivia AD, who was sporting a Game of Thrones hockey jersey. And so the trivia began. Round one consisted of ten questions based on general knowledge, and they didn’t seem impossibly difficult, at least at first. Q: Who was the first hand of the Mad King? A: Tywin Lannister! Q: Which of the Seven represented wisdom? A: The Crone! Q: What is the sigil of House Clegane? Q: Three dogs! But then came some trickier stuff involving geography, like a question that asked, in all seriousness, what land bridge the First Men had used to travel from Essos, a query that even stumped my teammate Kegs, who had studied the maps beforehand.

Round two was harder still, requiring us to identify the source of quotes ranging from the obvious (“You know nothing, Jon Snow”) to the obscure (“You swore a vow to guard the king, not to judge him”). Round three was a true-or-false sprint that kept the Hot Pies in the game; luckily, some of the trivia bits we’d boned up on during our pre-contest cramming session came up (e.g., Q: “What is dead may never die” is associated with the Drowned God. A: true!), which resulted in significant high-five action. And then round four centered on nicknames, our strongest suit. Bring on the Sand Snakes! 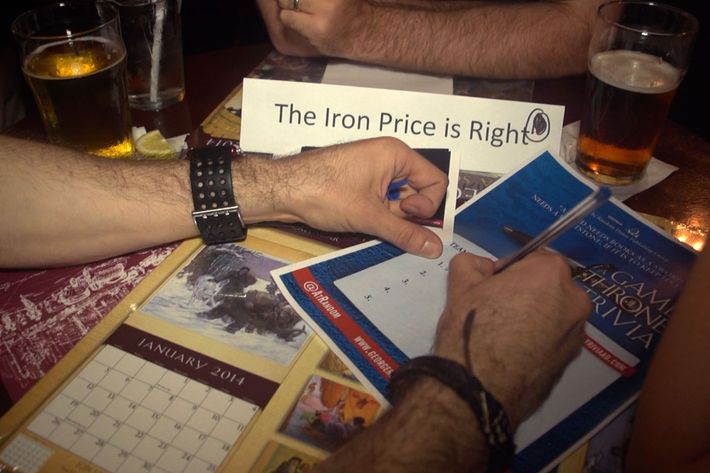 But then came the fifth and final test, a lightning round of twenty questions, many of them pretty arcane. Q: What was the motto of the Golden Company? A: No idea. Q: What was the name of the daughter who was eaten by Dany’s dragon? A: No idea. (“I’d be surprised if there were many teams that got that one,” said Martha afterwards.) Q: How many trueborn sons has Walder Frey had? A: No idea. Only one team knew that last answer — Walder has had 22 trueborn sons — and it was enough to make them the night’s big winner. The members of that team, House Ancalagon, were actually constituents of a Tolkien meet-up group, but Random House didn’t seem to mind. And despite being roundly defeated, the Brotherhood Without Banners didn’t mind, either.

After the event, Martha encouraged some of the other contestants we’d met to come hang with the BWB at future outings, like baseball games, summer barbecues, and hikes — or even more bar trivia. But she had reasons to doubt the outreach would pay off.

“I am not sure we won too many converts, as we ended up the most boisterous by far of the teams,” she said as we left the bar. “It’s probably a good thing that they put us in the back where we could do the least amount of disruption.” As if the Imp would have objected to that.

my single is dropping 21 mins ago
Charli XCX and Rina Sawayama Answer Our Begging, Drop ‘Beg for You’ Featuring an extremely well-executed sample of “Cry for You” by September.
yeezy season 1:18 p.m.
Ye Announces Donda 2, in Case You Haven’t Gotten Enough of Him Out February 22, or 2/22/22.
nominations 12:38 p.m.
PGA Noms Boost Tick, Tick … Boom! and Being the Ricardos Oscar Odds Spider-Man: No Way Home did not receive a nomination.
nevermore 12:13 p.m.
Nicolas Cage’s Pet Crow Thinks He’s an ‘Ass’ But he likes “the goth element.”
west side story 12:03 p.m.
A Timeline of the Allegations Against West Side Story’s Ansel Elgort West Side Story co-stars Rachel Zegler, Ariana DeBose, and Rita Moreno addressed the claims over a month after the premiere.
vulture 10x10 12:00 p.m.
The Indie Puzzle 33-Across: “Dear Evan Hansen” prop.
music supervision 11:28 a.m.
Yellowjackets and Euphoria’s ’90s Music Is Filling a ‘Void of Angst and Anger’ Music supervisor Jen Malone breaks down the two shows’ musical fixations and teases some tracks still to come.
overnights 11:00 a.m.
And Just Like That … Recap: Put a Ring on It Everyone is having relationship issues.
this! is! a fun quiz! 11:00 a.m.
Can You Answer the Jeopardy! Clues Amy Schneider Couldn’t? Probably not! Well, maybe. Why don’t you try and see?
By Devon Ivie
podcasts 10:51 a.m.
There’s a New Serial Productions Podcast Coming Next Week In which Brian Reed of S-Town fame tackles a controversial event from recent British history.
racism 10:15 a.m.
Bravo Fires Jennie Nguyen From The Real Housewives of Salt Lake City Nguyen responded on Instagram Live, apologizing on one hand and digging a deeper hole with the other.
he's running Yesterday at 11:34 p.m.
The Daily Show: Ronny Chieng Wants to Be a Supreme Court Justice He has a law degree, hello!
celebrity engagements Yesterday at 9:58 p.m.
Macaulay Culkin and Brenda Song Are Engaged Please reunite the Pizza Underground to play the reception.
theater review Yesterday at 9:00 p.m.
Skeleton Crew, Transferred Uptown, Loses Some Muscle Phylicia Rashad and company try to make a small show fill up a big stage.
my single is dropping Yesterday at 8:33 p.m.
Listen to Machine Gun Kelly Cover Frank Ocean’s ‘Swim Good’ Apparently MGK thinks he can swim better.
this! is! a winner! Yesterday at 7:30 p.m.
A Talk With That Cool-Glasses Guy Who Defeated Amy Schneider on Jeopardy! “I thought I was destined to lose, so I just did my best.”
By Devon Ivie
this! is! devastating! Yesterday at 7:30 p.m.
Jeopardy! Queen Amy Schneider Ends Her Million-Dollar Reign Rhone Talsma unseated the champion after her 40-day streak.
fight club Yesterday at 6:38 p.m.
Chuck Palahniuk Is Fine With Chinese Censorship of Fight Club, Actually The Chinese ending is actually closer to the book.
extremely online Yesterday at 5:14 p.m.
We Asked Linguists Why People Are Adding -Ussy to Every Word A calzone is a pizzussy. A wine bottle has a winussy.
allegations Yesterday at 3:14 p.m.
Bill Cosby Calls We Need to Talk About Cosby Director a ‘PR Hack’ He also denied all claims against him.
More Stories