Near the start of Kevin Hart’s new comedy concert film, Let Me Explain, he moseys onstage in front of a sold-out Madison Square Garden crowd, surrounded by geysers of flames jetting out from the stage. As Hart explains, he wanted to have the same kind of over-the-top pyrotechnics like those he had seen at a Jay-Z/Kanye West concert. And he does. And its ridiculous. Throughout his performance in the film, these bursts of fire are used to punctuate punch lines or at random moments. It’s a silly little gag that nonetheless says a lot about Hart — that he’s a black comedian with a sense of showmanship who is also self-aware about not being as cool as rap stars. And it’s this dynamic that has helped make him arguably the biggest stand-up comedian working today, with a giant fan base that justifies the theatrical release of Let Me Explain at a time when the comedy concert movie is seen as a thing of the past. (These days, the standard route is straight to cable or, as in the case of Louis C.K. and Aziz Ansari, self-distributed online.) And whatever the format, with half of 2013 down, it looks like Let Me Explain might just be the year’s best stand-up special. 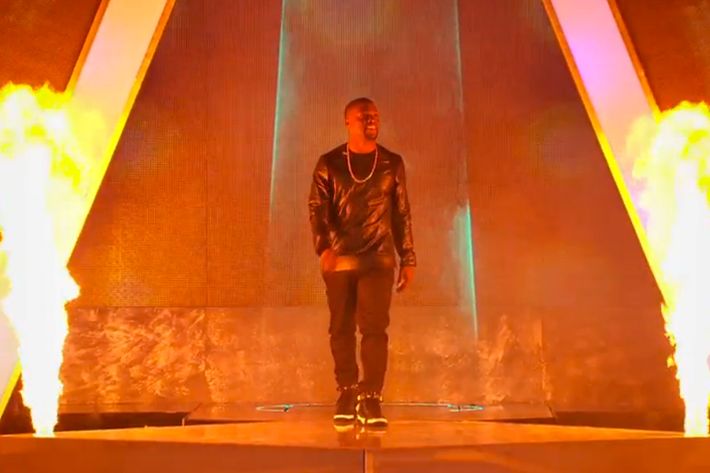 After years of near big breaks (a 2001 co-starring role in a failed Judd Apatow pilot, a 2004 sitcom that lasted only six episodes, a starring role in the film Soul Plane), Hart turned his attention to stand-up, slowly building an audience under the radar of the mainstream media. 2010’s Seriously Funny was that year’s highest rated stand-up special on Comedy Central. 2011’s independently released Laugh at My Pain grossed $7.7 million at the box office, making it the eighth highest grossing indie film of the year. His starring role in 2012’s hit comedy Think Like a Man solidified his position as one of the hottest comedians in Hollywood — he currently has about half a dozen film projects in the works, as well as a hit BET show, Real Husbands of Hollywood.

As Hart explained in Laugh at My Pain, his bad luck turned around when he started doing more personal material onstage, talking about his family — his father’s coke addiction, his marriage, his children — and taking himself down a peg. Hart’s best jokes contrast bravado and masculinity with insecurity and self-deprecation. In Laugh at My Pain, he tells a joke about how he might be doing well financially, but he’s nothing compared to his athlete friends: “Dwyane Wade tried to make me buy a boat. I don’t even have a fucking house.” In that way, the movie was a mission statement, establishing Hart’s brand of comedy, which has always contained elements from prior greats: Bill Cosby’s storytelling ability; Eddie Murphy’s charm, energy, and ability to play characters; Louis C.K.’s self-exploration; Chris Rock’s pointedness; George Carlin’s ability to build momentum; Dave Chappelle’s ease; Woody Allen’s height.

While Laugh at My Pain was brilliant in small spurts, Let Me Explain is even better, a performance by a comedian at the height of his powers (something the film wants us to remember, which is why its first fifteen minutes are taken up by a mini-documentary of Hart’s hugely successful international tour). Let Me Explain is Kevin Hart as Kevin Hart. He blends frantic silliness and honesty in a way that no one at his level is doing today. Hart’s 2011 divorce runs throughout the entire special. A bit about trying to save his marriage descends into talking about doing ecstasy for the first time and a pantomime of making sweet, sweet love to a beanbag chair. He goes from talking about wanting to be a better father to how he wouldn’t know what to do if he ever caught his ex-wife giving another man a blow job (he’s so short he might accidentally head-butt the guy right in his erection). There’s an axiom that says “truth in comedy,” and Hart’s insecurity around the end of his marriage and his own masculinity is where Let Me Explain’s comedy comes from.

Somewhere over the last 30 years or so, it became cool for comedians to develop an antagonistic relationship with their audience. “I’m going to destroy them tonight” is the type of thing that would be heard in comedy clubs across the country. Chris Rock is one of the greatest stand-ups ever, but when you watch him methodically and forcibly attack his jokes, it can feel like he wants to dominate the audience. There’s none of that in Hart, and Let Me Explain hits because it’s possible to feel not only a connection to his jokes, but to him as a person. In the movie’s most singular moment, Hart is in the middle of a bit (which is seen below) and then he stops and giggles a little at the scenario he’s painting. Then he chuckles. Finally he breaks into a full-on, folded-over, tearing-up laugh. For almost two minutes, the special stops completely while Hart laughs uncontrollably. These days, laughing at your own jokes and breaking is often called hack-y, but it’s hard, in that moment, for such an argument to feel anything but cynical. If something is funny, once in a while, you want the comedian to be there with you, dying in laughter.

I couldn’t help but think of two comedians: Patrice O’Neal and Pete Holmes. The two are as different as comedians can be, but both are known for being fully present onstage. O’Neal, who died in 2011, could do an hour where he just messed around with the audience. Holmes is known for a youthful wackiness and willingness to laugh at himself onstage. O’Neal was one of the greats from the nineties, an era of tough club comedians; Holmes is one of today’s lighter, improv- and alternative room-raised rising stars. Hart falls directly between the two. He’s a transition away from the hard comedian on to something more fun, which makes him the most exciting stand-up working. Louis C.K.’s last rightfullyacclaimed special, Oh My God, was very funny, but it hit familiar beats for him (masturbation, kids, his middle-aged decomposition). Hart’s goofy confessional style feels like something fresh.

cut to the feeling 5:54 p.m.
Now We Know Who Would Win If James Bond Fought a Ring Light Daniel Craig met his match during a Zoom interview.
chat room 5:47 p.m.
Euphoria’s Eric Dane Is Building ‘Cal 2.0’ “Last year, Cal was very contained, very protected, very cautious. This season, he gets cut loose a bit.”
disrespect the classics 5:33 p.m.
Eric Clapton Thinks We’ve Been Hypnotized Into Getting Vaxxed And it’s his “calling” to talk about it.
drip drip drip 5:30 p.m.
Finally, The Correct Encanto Song Has Broken Into the Top 10 “Surface Pressure” fans, hello.
lingering questions 4:05 p.m.
11 Burning Questions About Ozark’s Final Act The final season’s first half has left us with plenty to ponder about how the saga of Marty and Wendy Byrde will conclude.
chat room 2:32 p.m.
Righteous Gemstones’ Tim Baltz Shares All the Details of BJ’s Lynchian Baptism “He feels like a special little boy in that outfit, so why not twirl?”
robert gober 12:45 p.m.
What I Saw in Robert Gober’s Mirror Gazing into his new work was like seeing the wreckage of the recent past — the pandemic, protests, a country torn apart, and my own internal disarray.
vulture 10x10 12:00 p.m.
The Golden Puzzle 22-Across: TV network home to Housewives and hustlers.
announcements 12:00 p.m.
Introducing the Vulture 10x10 Daily Crossword So we heard you like daily word games.
sundance 2022 11:55 a.m.
Evan Rachel Wood Says She Was ‘Raped On-Camera’ by Marilyn Manson “I was coerced into a commercial sex act under false pretenses.”
"going out like mr. big" 11:51 a.m.
Billions Gave Peloton PR Another Heart Attack And once again, the exercise-bike company says it wasn’t consulted.
copper pipes 11:41 a.m.
Off Broadway’s Perfect Crime Is at the Center of Actual Crime On the upside, Catherine Russell got to see a Broadway show.
rich people things 11:28 a.m.
9 Essential Gilded Age Period Dramas to Suit Your Fancy Rich people, love triangles, and lots of Champagne.
overnights Yesterday at 11:09 p.m.
Power Book II: Ghost Recap: When All The Tea Is Spilled An action-packed episode filled with drama, tea spilling, and a jaw-dropping ending.
overnights Yesterday at 10:40 p.m.
The Righteous Gemstones Recap: Baptism By Gunfire The triumphant return (and abandonment) of Baby Bill.
overnights Yesterday at 10:30 p.m.
The Real Housewives of Salt Lake City Recap: Storming Outs and Storming Backs In a SLC first, the women show signs of … actual friendship?
theater review Yesterday at 10:06 p.m.
Taylor Mac’s The Hang Is Incomprehensible in the Best Way Baroque and soulful and sonically delicious.
overnights Yesterday at 10:02 p.m.
Euphoria Recap: Navigating a Binary World Rue dabbles in gaslighting and drug-dealing.
overnights Yesterday at 10:00 p.m.
All Creatures Great and Small Recap: Chickens in the Streets Buckle in: We’ve got a sad episode.
overnights Yesterday at 10:00 p.m.
Billions Season-Premiere Recap: War Games With the departure of Bobby Axelrod, Billions reinvents itself as an ensemble drama.
More Stories