I’ve been enjoying B-movies, or maybe I should call them C-movies, for decades now. I used to see low-rent, don’t-open-that-door horror flicks at drive-ins and dollar cinemas when I was a kid growing up in Dallas in the eighties. These Syfy movies are conceived in the same spirit — specifically the spirit of shlock-master Roger Corman, who decided what pictures to green-light based on exploitability, and who wanted to know what a proposed movie’s poster would look like before anyone rolled film. (UPDATE: Holy Corman! According to a Vulture piece that ran a few hours after I posted this, Syfy really does think this way, and won’t even green light a movie without a great, corny title.) The exploitation picture thrived from the fifties through the mid-eighties, until cable and home video killed it off. When it died, the communal experience of watching crap-tastic entertainment died with it.

Or so we thought! The experience is back now, sort of — thanks not to Syfy, which has a viable franchise here and knows it, but to Twitter. The phrase “virtual watercooler” has been applied to social-media-based TV watching for a couple of years now, but the sort of response that’s inspired by the likes of Sharknado and Liz and Dick and other knowing crud-fests is a different, er, beast. The feast is the point. Such movies are not truly complete until viewers have insulted them on the Internet.

The filmmakers and the networks who fund their projects usually seem to know what kind of product they’re making. Syfy puts the intent right up front, marketing its latest monster movies with ineptly PhotoShopped images of sharks falling from the sky and trailers that cherry pick memorably cheesy lines and moments. (“We’re gonna need a bigger chopper!”) They’re chumming the waters for the sharks of Twitter and Facebook. The strategy evokes a great line from Jaws: “You open the beaches on the 4th of July, it’s like ringing the dinner bell, fer chrissakes!”

There’s nothing untoward about this spectacle because nobody participating at any point has even the slightest illusion as to what’s going on. We’re partaking in a ritual sacrifice of sorts, one done with good humor and exuberance. It’s all virtual, all Hollywood, all silly. That’s not artistic blood being spilled on our cultural sea, it’s cheap red dye — like that pizzeria fruit-punch stuff that froths the surface of the seawater in Sharknado when the tsunami floods the city streets and civilians start getting pulled from their cars by giant aquatic carnivores that look, from certain angles, like huge, slimy sock puppets. (“That’s a tiger shark.” “How do you know that?” “Shark Week.” Actual dialogue! Awesome!)

When CNN’s The Lead called me up yesterday and asked me if I could explain the appeal of these films, I laughed, and the producer laughed, too, and so did the cameraman, because everyone knew the answer. They’re fun. They scratch an adolescent, maybe childish itch. They let filmmakers and networks and audiences act like goofy kids making up stories during a slumber party or a camping trip and then critiquing it. “Dude, listen: What if a waterspout deposited hundreds of sharks in the flooded streets of a city, and they were like, swimming into houses and bars and stuff, and people had to, like, stab them with harpoons and beat them with bats and shoot them with shotguns, and they were like, fighting them in living rooms and stuff, wouldn’t that be cool?” “Sharks would never do that, you idiot.” “Yeah, but what if they did?” “I wonder if you could kill a shark by beating it on the head with a barstool.”

Flash-foward to 2013: that’s exactly how John Heard’s town drunk character kills one of the beasts in Sharknado. 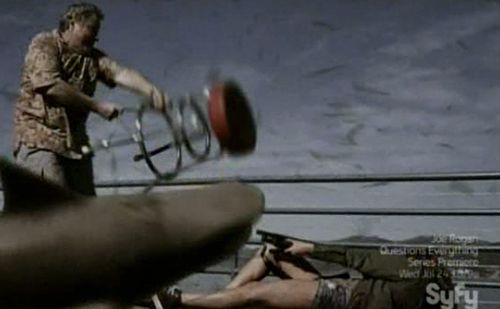 “The highest-rated Syfy monster movie got three million viewers,” the CNN producer said to me. “The season finale of Mad Men got 2.7 million. Why do you think that is?” I said, “Because while Mad Men has intelligent writing, direction, acting, and set design, and gives you insight into the relationship between the individual and the flow of history, it doesn’t have 90210’s Ian Ziering cutting a shark in half with a chainsaw.” If Mad Men could somehow devise a scene in which Don Draper cut a shark in half with a chainsaw — or maybe Pete Campbell — it might be a different story, but it’s not. Sorry, Matt Weiner.

Back in the eighties, my friends and I would file into the now-defunct Big Town Mall or Promenade theater, buy a ticket for whatever gory, silly movie opened last month in the first-run house and quickly left, kick back, and enjoy the show. Every row was the theater equivalent of the back row of a classroom, the place where all the smart-asses hung out. The movie itself was not really the point, unless we suddenly realized it was good, which didn’t happen often. The point was the call-and-response that happened between the film and its intended audience. The movie would do certain things specifically to provoke viewers, and even leave a bit of space for laughs, applause, and snotty remarks. The viewers did what was expected. Everyone went home satisfied.

Of course, while walking or driving home — or waiting for our moms to pick us up, argh! — we’d usually lapse into a perverse, half-assed version of Siskel and Ebert discussions, rating the film in relation to other knowingly cheesy pictures we saw last week or the week before. Which is better, The Hidden or The Kiss? Which is better, Child’s Play 2 or Nightmare on Elm Street 4? What do you mean, none of them can hold a candle to Prophecy? Are you crazy? I saw Prophecy. Prophecy sucked!

We’re seeing the same sorts of conversations today. “Could Sharknado take Sharktopus in a fight to the death?” asks J.J. Duncan of Zimbio.

Apples and oranges, dude. But since you asked: Sharktopus.