Set in a women’s prison, Orange Is the New Black overflows with characters. Ones who dream of fictional “outside” fiancés, ones who march around prison halls with life-size crosses slung across their backs, ones whose eyes reveal something slightly scary. That last one? That’s OITNB’s Crazy Eyes (real name Suzanne), a character with many endearing tics, including her penchant for the theater and, her, uh, territory-marking habits. Uzo Aduba, who plays Crazy Eyes, talked to us about what it was like to be in such close quarters with her co-stars and how sometimes you have to just “go for it.”

I feel like the show is all about female friendship. Did you guys really bond in the making of it?
Oh my gosh, it was incredible. In performance, you don’t always feel that sort of family bond right off the top. It sort of develops and grows over time. But right from the beginning, it felt like everyone in the cast, and everyone in the crew, too, were all moving in the same direction. We had the same interests, sense of humor. We’ve been wrapped since March 21 and we’re hanging out still. Like a week after we’d wrapped, you’d think people would be like, Oh … But we’re still hanging out with each other. And in real ways. Like, they just come to see other plays, support other people’s short film projects that they’re working on — we’ve gone on vacation together, you know?

Is Crazy Eyes based off a real person?
There is a woman that Piper [Kerman] did meet in the prison named Crazy Eyes. But Jenji used that as a jumping-off point, for not only my character, but for others. Where she could start to develop these people into other story lines, and other experiences and adventures. So, Crazy Eyes may be a real person, but as they were writing and creating that character, they took it down another path.

[Here’s a bit of Crazy Eyes from Kerman’s book, Orange Is the New Black] 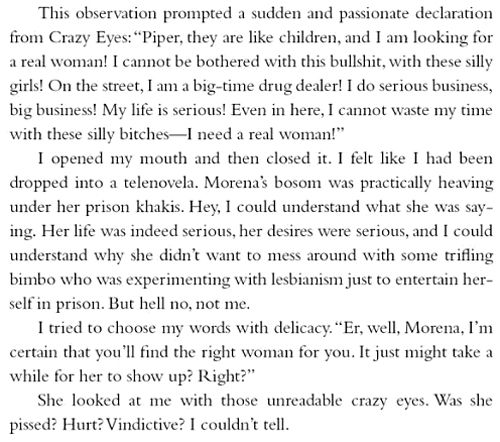 Did you go to any women’s prisons?
I didn’t, but my sister and I used to be weirdly obsessed with MSNBC‘s Locked Up Abroad. When I found out I got the job, I started rewatching YouTube videos from that show, and one of the first clips that came up was one that they had about a women’s prison, as if they knew that I would be watching. And they were talking about prison relationships, about how sometimes people are just gay for the stay, you know, for the time they’re in prison, and then sometimes it’s built totally out of, you know, “I’m gay.”

A lot of people are talking about the show from that perspective. The realism and diversity of the relationships.
Look at Natasha Lyonne’s character, and Yael Stone’s primal needs and desires to be touched and longed for. How that relationship works, for one side, and maybe doesn’t work for the other side. It was such a wide palette: from color to style to shape.

You’ve given her a very interesting physical tic. Is that something that you developed?
I did do a kind of character development. She has a childlike stare, except children aren’t scary.

Ah, like the children who want to play with you in The Shining.
Right! And I thought that was so loaded, the way that Crazy Eyes spoke. She would call [Piper] Daisy, or wanted to call her dandelion, you know? It made me think this person’s like, “I’m really good at flirting.” She doesn’t even realize that when she thinks she’s winking at someone, it’s so exaggerated that it’s actually scary.

I have to ask about the part where Crazy Eyes decides to mark her territory.
When I read it, I honestly was like, This is not real. I am going to pee on a floor? Then I started thinking, [writer Sian Heder] did research and this actually happened: So many of these women have gotten so many things stripped from them already. You are living in a total primal environment, so why wouldn’t you do that? It’s a totally primal thing. It makes perfect sense for a character like Crazy Eyes to do something like that. I think after a certain point, we were all just like, “Wow. Okay.” We just went there.