Heisenberg … mmm … so handsome … Bryan Cranston had some fun during Breaking Bad’s final tour of Comic-Con. He spent part of the weekend walking around the convention floor in disguise as … himself. As seen in the photo below, Cranston had a custom-made Heisenberg mask that helped him pose as a fan and get around without getting mobbed. (Cranston pitched his voice higher to talk to Con-goers: “So it was fun meeting you, and you met me!”) Cranston was so impressed with his mask, he brought it to the show’s panel today, propped it up on a mic stand, and began to make out with it. 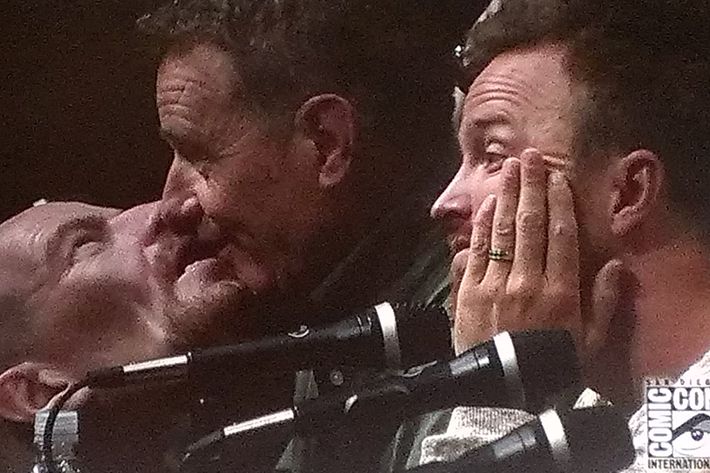 There was much discussion about the journeys each of the actors have been on through almost five seasons of the show, (but if you’re on this site you’ve certainly heard the Mr. Chips-to-Scarface talk before). The most interesting discussions, instead, came out of a couple of fan questions about Breaking Bad’s most improbably moments. How exactly did Walt pull off poisoning Brock with Lily of the Valley, for example? Series boss Vince Gilligan said it would have been difficult but doable! “The writers and I would tell ourselves the story of the Evil Juice Box Man,” he said, laughing. “[Walt] had just enough time to do it. It was improbable perhaps but not impossible … I think probably what he did was crush some of the stuff up and put it in a juice box or something, and being a teacher, he probably knew his way around a school and he probably got into Brock’s nursery school. That’s our inter-story for how it would have happened. It would have been tricky.”

Aaron Paul, who greeted the audience with a loud “YEAH BITCH, HALL H!” said it wasn’t necessarily difficult to buy Jesse killing Gale so much as it was tough to swallow. “That’s when he turned into a really bad person. He killed the nicest guy on the show!” Cranston said there was some behind-the-scenes drama when it came to the death of Jane. In the original script, Walt pushed Jane onto her back so she would choke to death, but Gilligan revised it after getting feedback from network and studio executives that it might be too soon to have Walt break so bad. Cranston applauded the shift. Rather than outright murdering her, “the culpable moment [became] when he recognized this girl could die and he doesn’t do anything about it.”

Perhaps the most unbelievable moment, however, happened for real. When a frustrated Walt throws an entire pizza on the roof, no rigging or special effects were required. “I kind of guessed the weight of it and the trajectory and — first take! Boom! Lands on the roof,” said Cranston, who said he couldn’t repeat the feat in subsequent takes. “We just got really lucky.”

+Comments Leave a Comment
Photo: Bryan Cranston Makes Out With Himself