James Gandolfini’s final leading role was in the movie Enough Said, which will debut at the 2013 Toronto International Film Festival in September. “He played a divorced dad who doted on his daughter and was crazy about Julia’s character,” the film’s director Nicole Holofcener told The Holywood Reporter. “He didn’t believe he could play a romantic lead, even though everyone on the set thought he was sexy and hilarious.” The film’s poster, which debuted at the Huffington Post, captures Gandolfini mid-laugh alongside co-star Julia Louis-Dreyfus. 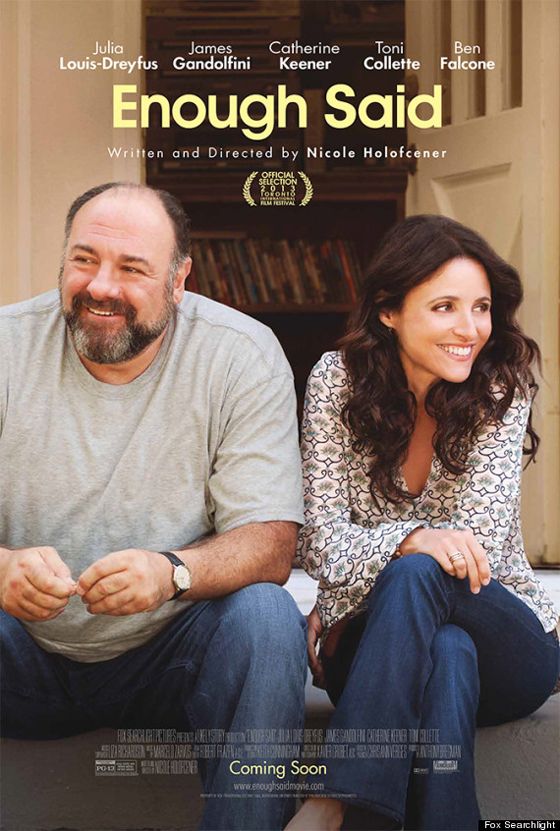 stand-up 13 mins ago
Ronny Chieng Signs Netflix Deal for Three New Comedy Specials Get ready for two stand-up specials and a “semi-scripted road trip comedy” from The Daily Show correspondent.
paramount+ 24 mins ago
Master Chief Is Heading to Paramount+ The long-awaited Halo series will premier in early 2022.
the streaming wars 25 mins ago
Drag Race Producers Werking on New Competition Series for Paramount+ And season six of RuPaul’s Drag Race All Stars is sashaying to the streamer.
the law 6:44 p.m.
Bruce Springsteen Pleads Guilty to Drinking in National Park The charges were dismissed.
paramount+ 6:41 p.m.
All the Old Paramount Movies Are Becoming New Paramount+ Shows The streaming service is developing shows based on Love Story, Fatal Attraction, Parallax View, and more.
the streaming wars 6:26 p.m.
Paramount+ Will Stream Mission: Impossible 7 and A Quiet Place Part 2 Copying the HBO Max strategy we see.
the law 5:57 p.m.
Chance the Rapper Sues His Manager, Defends The Big Day The new suit claims Pat Corcoran used his association with Chance to further his own business interests.
wandavision 5:43 p.m.
So Is WandaVision Getting a Season Two? If not, we blame Agatha.
tv 5:39 p.m.
Matt Groening Responds to Simpsons Recasting Characters “All of our actors play dozens of characters each, it was never designed to exclude anyone.”
streaming 5:32 p.m.
Comedy Central Is Getting the Brands Back Together for Paramount+ Specials from Amy Schumer and movies from the Workaholics and Beavis and Butt-Head guys are on the way.
crane family reunion 5:25 p.m.
He’s Still Listening: Frasier Is Getting a Paramount+ Revival Kelsey Grammer will return, but no word on the others yet.
final seasons 5:24 p.m.
Younger’s Seventh and Final Season Will Air on Paramount+ First At least we have a crumb of footage of what’s in store for Liza.
adorkable 4:52 p.m.
15 Essential Episodes of New Girl The internet’s favorite sitcom is as heartfelt as it is funny. And it’s very, very funny.
hahnvision 3:19 p.m.
It Was GIFs of Kathryn Hahn in WandaVision All Along God bless Agnes, just having a gas!
respect the classics 3:16 p.m.
Paul McCartney Wrote a 900-Page Memoir About His Lyrics It’ll cover his Beatles, Wings, and solo songs.
the gold rush 2:58 p.m.
The Golden Globes Strikeouts Are a Who’s Who of Who Hasn’ts Oscar winners? Yes. Tony winners? Yes. Globe winners? No.
1.5x speed 2:30 p.m.
The Big Loop, I’m Not a Monster, and 3 More Podcasts Worth Trying Plus, a Taylor Swift deep dive.
mcu 1:55 p.m.
Spider-Man 3 Gets An Ominous Title, No Way Home Tom Holland, Zendaya, and Jacob Batalon troll fans in a new teaser.
busy busy busy 1:18 p.m.
The Lucas Brothers Are Teaming Up With Judd Apatow for a Movie The movie will be a semi-autobiographical take on the identical twins’ lives.
the art of ending things 12:35 p.m.
A Brief History of the Alternate Movie Endings Lost to Time That is, until a few of them made their way onto DVDs as bonus material.
More Stories