With the exception of The Heat — which earned a solid $40 million on its opening weekend, handily defeating the competition — it has not been a good summer for women in the movies. Put more plainly: With the exception of The Heat, women have barely been in the movies this summer at all. In the words of NPR’s Linda Holmes, who wrote about the problem last month, “if you want to go to see a movie in the theater and see a current movie about a woman — any story about any woman that isn’t a documentary or a cartoon — you can’t.” The 2013 lineup is all superheroes and crass man-boy bonding. Granted, studios release these types of movies every summer, but usually they’ll at least give us one rom-com or female ensemble movie, or a woman in a role that is not “secretary to an Avenger.” Or so I assumed, based on fond memories of The Notebook and every mediocre Kate Hudson film ever made. This year seemed worse to me, and so I decided to do the math, comparing the number of women in major roles in the last five years of major summer releases with those in major releases from twenty years ago. It turns out that yes, 2013 is a bad summer — but it is far from a record low point. This has been a problem for 25 years now.

First, some notes on procedure: This exercise focuses on wide-release summer movies, which I have defined based on theater count, with adjustments for blockbuster screen inflation. For the years 2009 through 2013, I included movies that, at their widest release, were shown on at least 1,000 screens — a slightly generous designation that includes some medium-range, female-friendly movies (like Focus’s Seeking a Friend for the End of the World) but does not cover other indies, like Before Midnight (897 theaters) or Vicky Cristina Barcelona (726). (Since some smaller 2013 movies have not yet revealed their full potential, assumptions on which ones will cross 1,000 have been made.) For the years 1989 through 1993, the cutoff is 500 theaters to account for the pre-megaplex era (blockbusters maxed out at around 2,500 screens back then, as opposed to today’s 4,000) and also a more varied studio approach. The following charts, which compare the number of films with varying degrees of a female presence in a given year, are presented as a percentage of total wide-release movies for that summer. The summer season is defined as Memorial Day weekend through August for 1989 through 1993 and is expanded to late April through August for the later years, to include the new May rush. Animated films and children’s movies are not included (sorry, Free Willy).

Chart One: Percentage of Movies Featuring One Woman in a Co-Starring Role
We define a co-starring role as one that is, essentially, “memorable”: Screen time is a factor, but so is billing, which is an indication of whether the studio values a woman’s presence in the film. If the woman’s name was on the poster, or featured heavily in the trailer, she is included in this chart — even if her role was noticeably smaller than all the men in the film. Gwyneth Paltrow’s Iron Man 3 role counts, then, as does Amy Adams in Man of Steel; Maggie Gyllenhaal, who had a decent supporting role in White House Down but was completely absent in the marketing, does not. 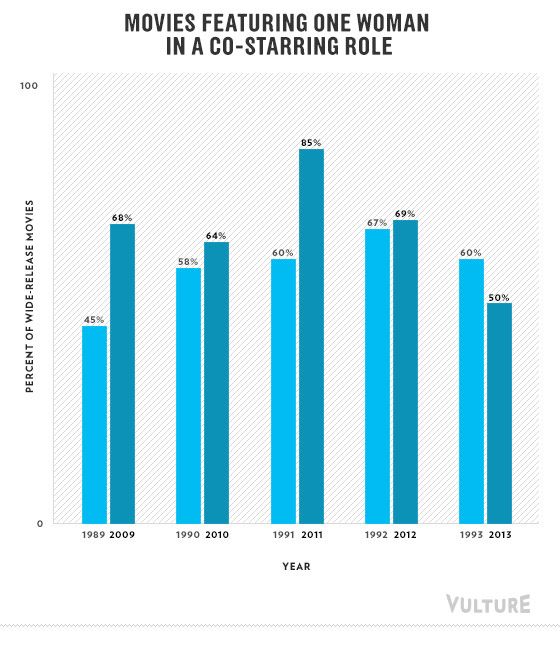 As you can see, even when counting courtesy roles, 2013 is the worst year in the modern era, and at 57 percent it’s below the average for the past five years. (That’s 67 percent.) But it’s pretty much equal to the average for 1989 through 1993 (58 percent), and it is not the lowest year in the study (that would be 1989, which was just an embarrassment across the board). Mind-bogglingly, the number of women in major studio movies has actually improved since the nineties — though as mentioned above, these roles are not always plum, well-developed roles. Which brings us to …

Chart Two: Percentage of Movies Featuring Two or More Women in a Co-Starring Role
Again, this includes supporting roles, but it is sort of like the Bechdel test minus the conversations: If a movie features more than one woman, then it usually treats the women as more than adornments or expendable love interests. (Notable exceptions: Gwyneth Paltrow and Scarlett Johannson in 2010’s Iron Man 2; Jeanne Tripplehorn and Holly Hunter in 1993’s The Firm.) Taken further, having more than one co-starring actress turns out to be a fairly decent indicator of a movie being about a group of women (A League of Their Own, say, or the obvious Bridesmaids example) as opposed to relationships or families. 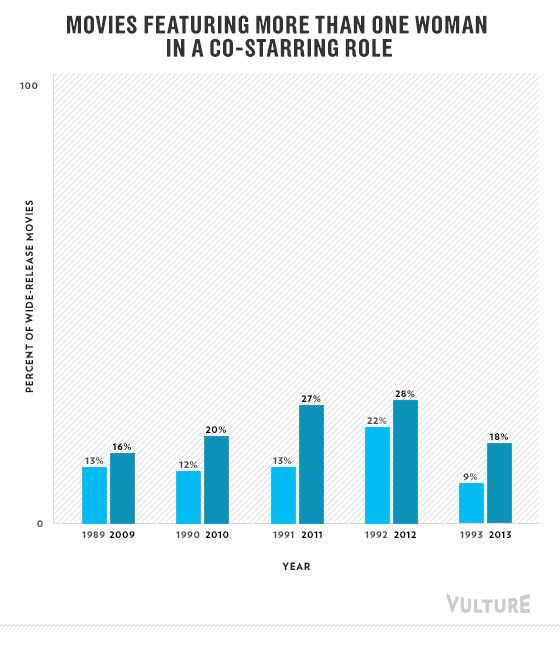 Again, 2013 is a low point of the past four years, but it is somehow not as low as the wasteland of 1989 through 1993. And even at its best, this data is a bummer: Less than 30 percent of all movies can bother to write in more than a wife or a sidekick.

Chart Three: Percentage of Movies Featuring a Woman in a Starring Role
And finally, the movies about women. Starring in this case also includes equal billing, so movies like When Harry Met Sally — which is just as much about Meg Ryan as it is Billy Crystal — are included, even though a woman is not the sole focus. (The numbers on movies focusing on just one woman are too depressing and microscopic to capture in a graph.) To clarify, the 2013 movies that met the “starring role” qualification were: The Heat, Pacific Rim (equal billing among humans, anyway), Girl Most Likely, The Conjuring, The To-Do List, We’re the Millers, Kick Ass 2, Closed Circuit, and Getaway. It is probably not a coincidence that many of these movies were shunted to August. 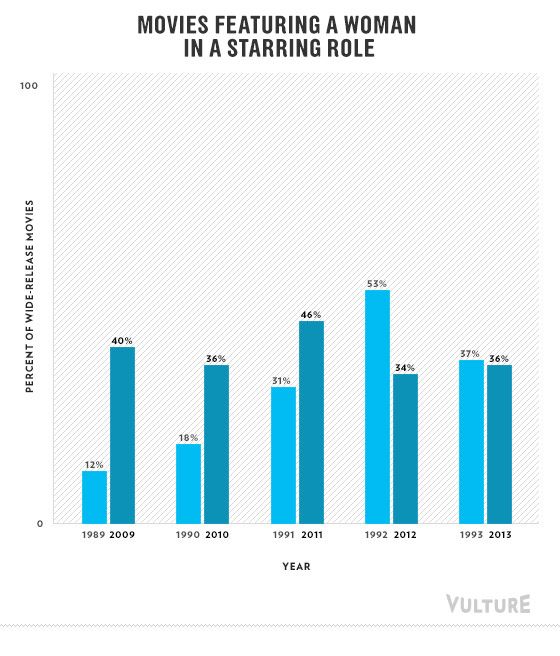 What’s interesting to note here is that movies about women are essentially a trend, like movies about archery or the apocalypse. The 2011 peak was the year of both Bridesmaids and The Help (Bad Teacher was also in there, riding on Bridesmaids’ girls-get-raunchy coattails); the 1992 peak was a year after the release of Thelma and Louise, as if studios suddenly realized that women could star in successful movies, too. And then the studios got excited about some other trend, and the starring roles for women disappeared again.

In conclusion: Yes, 2013 is a noticeably bad summer for women in movies — but every year is bad once you start counting, and it has been for ages. The only reassuring lesson from this entire exercise is that The Heat probably will inspire a round of knockoff female comedies, though if history is any indication, the trend won’t last past 2014. (Then soon, presumably, humans will be CGIed out of movies completely.) For now, I’ll see you at Girl Most Likely, The To-Do List, and all the current indie movies featuring sad girls or doomed romances or anyone who is not a robot. It’s all we can do.

+Comments Leave a Comment
Do They Ever Make Movies About Women?