Breaking Bad’s almost over. It’s hard to believe and sad to think about, but it’s true! The final eight episodes start August 11, and we’ll be counting down to that momentous occasion with a special BB treat every day for a whole month. (It’s like our Les Misérables advent calendar, except not at Christmastime. And with less singing.) Nothing will ever truly prepare us to say farewell to one of the best dramas of all time, but we can start the long mourning process, at least. Today, one last piece of Breaking Bad ephemera. We made it!

Vulture is the place for all things
Breaking Bad this summer!
Follow us so you don’t miss a thing.

Walter White has certainly had his fair share of medical maladies, starting with the series-defining lung cancer and moving on up through the several beatings and a stabbing or two. Unfortunately, there's still no medical treatment for brutality or cold-bloodedness. 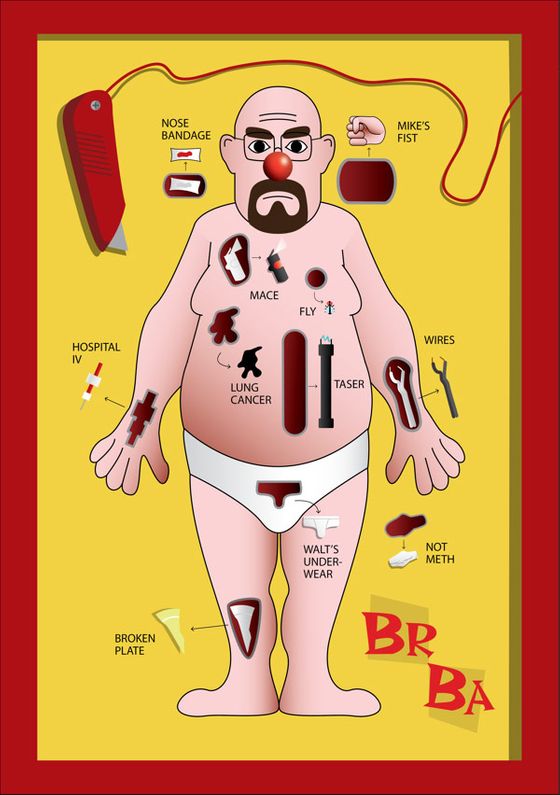 Not everything about Breaking Bad has to be cruel, harsh, or violent. Sometimes it can be sweet and adorable! The Walt cookies are charming, but the pink bear really puts it over the top. 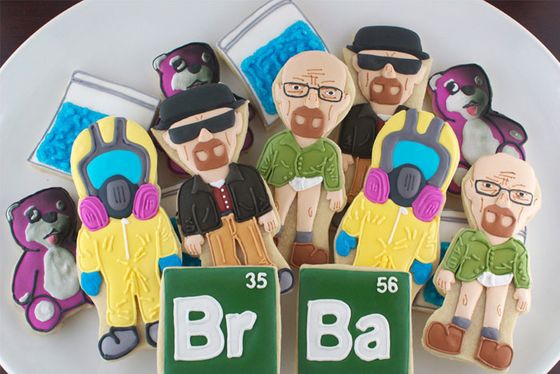 One of the most striking aspects of Breaking Bad is how relentlessly tense it is. Every episode of the show wrings anxiety from each — tick, tick, tick — moment, and season three's "One Minute" is pretty much perfect in every regard. BB is big on reflections, and the Salamanca cousins embody that: Almost but not quite identical, they're violent distortions of one another. 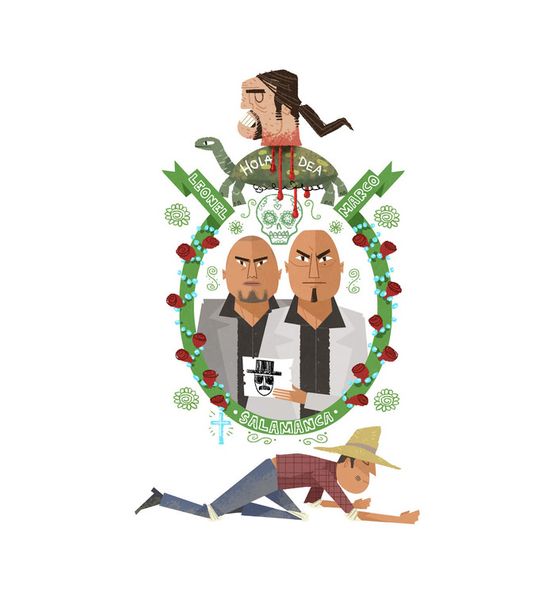 Reenact all your favorite Jesse and Walt scenes with these disconcertingly cute plush dolls. "Yeah, bitch!" you can whisper to yourself, as you drift off to sleep, clutching your BB babies. 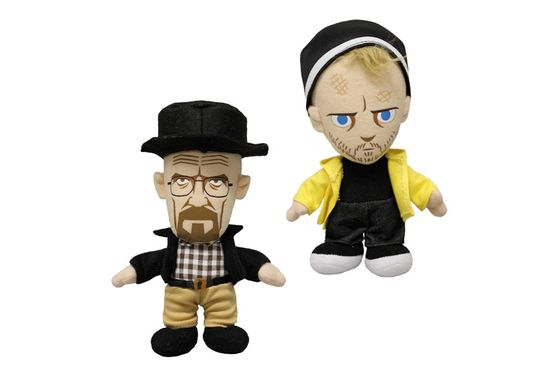 He's one of the best minor characters on Breaking Bad, a show that goes out of its way to have silly and fascinating weirdos in ever scene. (Miss you, "Franch" guy.) Sure, Saul's the one who's maybe getting a spinoff, but we'd watch a whole Badger show, too. Just look at those sick dance moves. 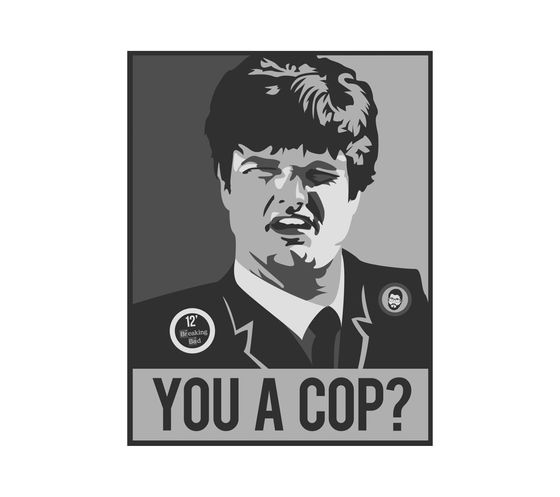 It seems like someone gets a star on the Walk of Fame every two days, but the powers that be finally got around to giving one to Bryan Cranston. Aaron Paul and Jane Kaczmarek were on hand to fete the actor, but the highlight of the ceremony is definitely Cranston breaking in to song. Our kingdom for a Walter White musical number!

Watch the video on AOL

There are only 54 episodes of Breaking Bad, so you could catch up just by binge-watching them. Or you could watch this video. Good god, this show is intense.

Not all BB fandom has to be frantic Tumblr posts and elaborate crackpot theories. Delicate decorative pieces have their place, too. And that place is on your earlobes. 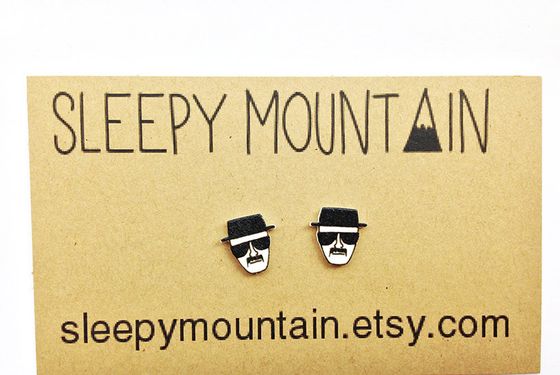 Just when we thought we'd seen every possible mash-up, here comes the Breaking Bad and Beavis and Butt-Head. On a van, no less. C'est magnifique. 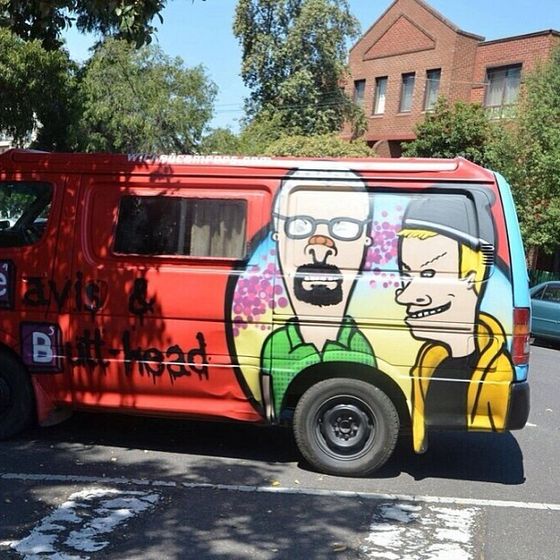 Dibs on being the wheelchair.

Bob Odenkirk is on the cover of the new issue of TNR, not that he thinks Saul would be a reader, really. "He definitely does not read The New Republic," Odenkirk tells the magazine. I think Saul reads GQ. I think he reads—is there a magazine that alerts you about when there are new strippers in town? He would read that. A stripper alert magazine. He would read USA Today if he were in the airport and were bored." 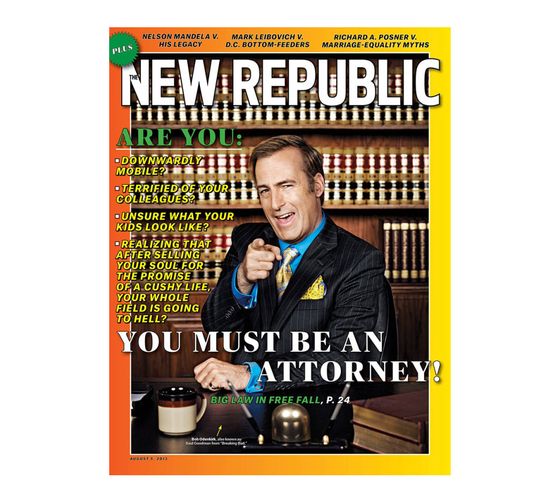 AMC still hasn't released any new footage from the final few episodes, but this highlight reel is enough to keep us going for a little while longer.

Walter White's transformation into Heisenberg is mostly spiritual and psychological. But…the hat helps. You too can proudly (well, sort of proudly?) own the same exact porkpie hat that gives Mr. White his ominous presence. Just don't leave it in the back of your car. 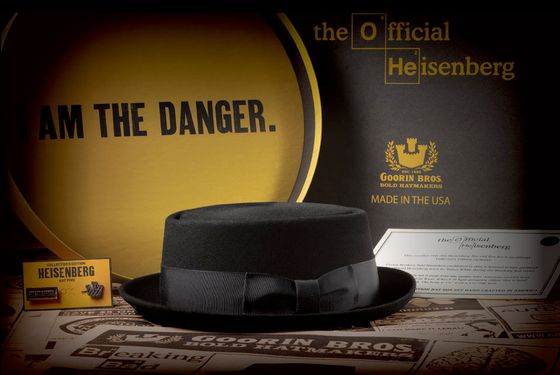 Whatever happened to the bike lock? Is that teddy bear's eyeball still kicking around somewhere? And hey — does anyone have a coupon for a pizza to toss on the roof? Behold Walter White's sometimes deadly debris. 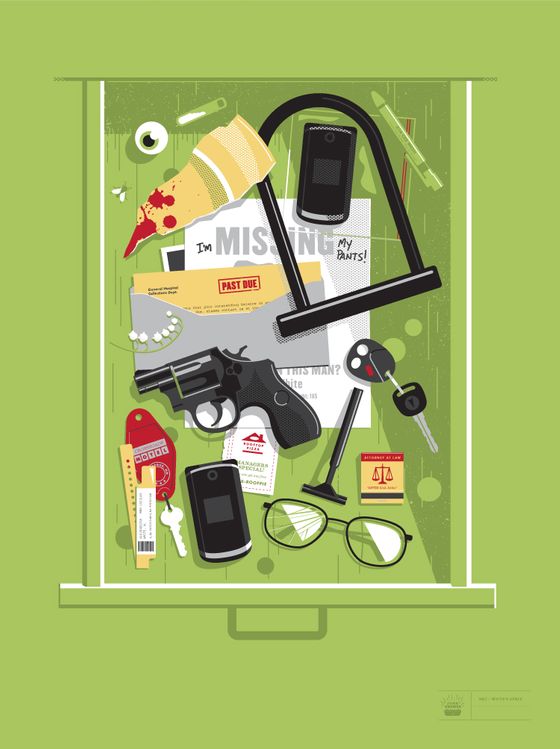 Here's is but one number from Walter White and the Amazing Blue Crystal Meth: A Breaking Bad Rock Opera, a full-on musical tribute that returns to the UCBLA stage in August. Warning: You're gonna be singing "I'm Hank!" all day.

BB writer and director Peter Gould tweeted this image of some of the storyboards from season four's "Problem Dog," and even in those sparse line drawings, the show retains its tension and urgency. 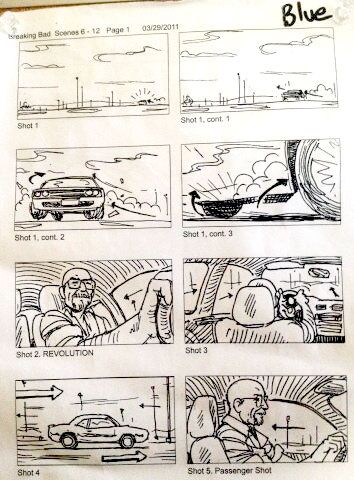 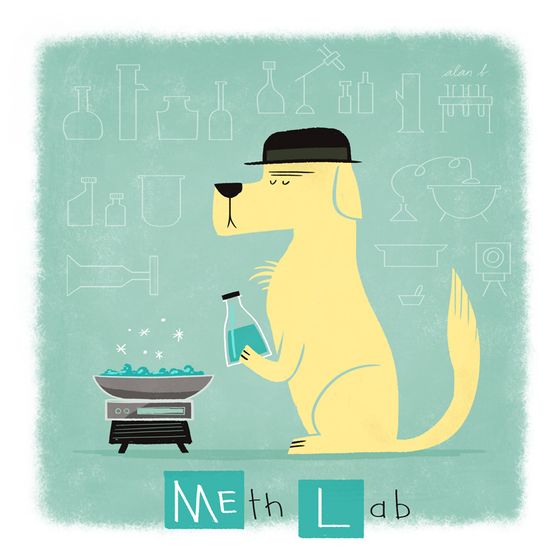 They're murderers and drug lords, sure. But Walt and Jesse are also secret BFFs, with the googgly eyes to prove it.

Watch the video on Vimeo

Here's Bryan Cranston (or is it Walter White?) reciting Percy Bysshe Shelley's "Ozymandias." (It's okay if you mostly recognize it from Watchmen.)

In 1999, Weird Al released a rambling 11-minute song. In 2008, Breaking Bad began. And now in 2013, their inevitable combination. Bizarre yet brilliant.

A mustache on a cat is one thing. But rubber gloves, too? Oh, it makes one's heart sing. For a show that's so bleak and vicious, there sure are a lot of adorable versions of Breaking Bad's characters. 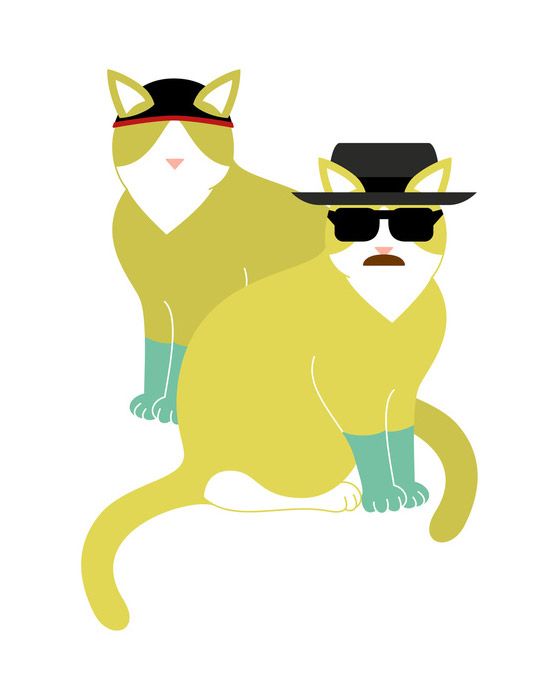 Usually the lovey-dovey collage treatment is reserved for pop stars and hunks. But some people love Saul. (Or Bob Odenkirk. Or both!) And just because he's a scummy lawyer with the world's tackiest office doesn't mean he's not worthy of devotional artwork. 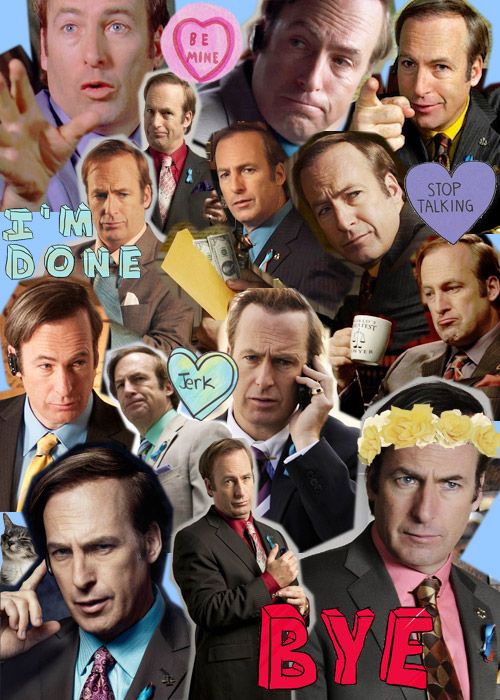 It's like if She & Him wrote tribute songs. Charming! So very charming.

The best part is the Etch A Sketched Heisenberg.

Download, print, and fold your very own papercraft Heisenberg. His head moves side-to-side! And his spirit moves from light to darkness. 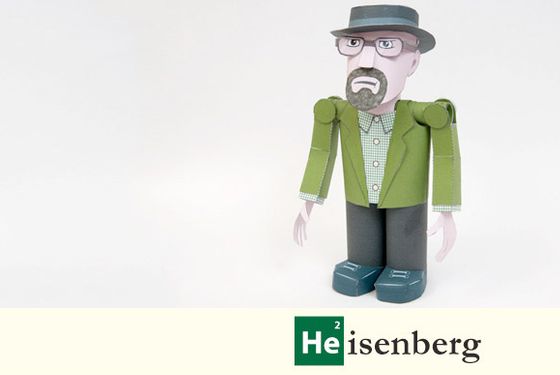 Man, remember season one? Where Krazy-8's imprisonment in Jesse's basement was shockingly violent? Oh, for those days of innocence. 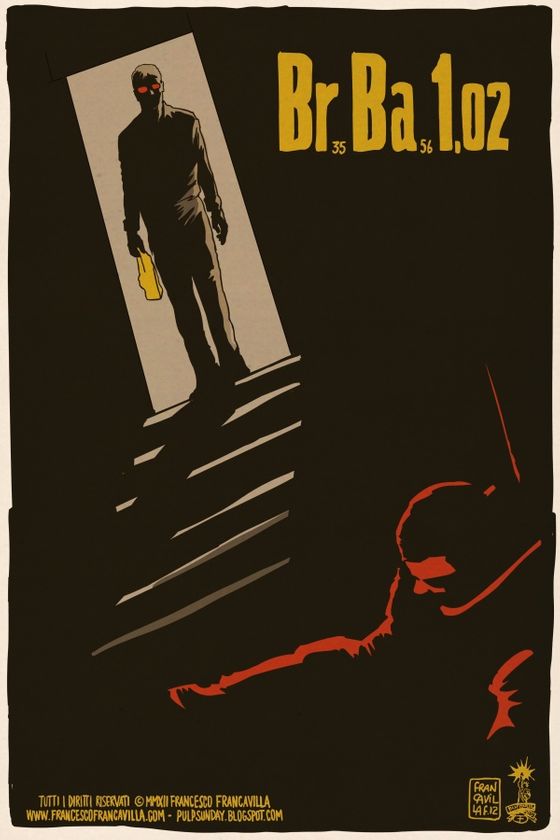 Not everything is super-serious all the time in the world of Breaking Bad. From the looks of these clips, things get pretty goofy on set.

Remember, just because your coworker is blessed to share a name with one of TV's most lovable junkies doesn't mean you should shout "bitch" constantly. Or make mean references to Monsters, Inc.

BB's affection for the periodic table has been an iconic element of the show since the beginning — hell, it's right in the opening credits. But keep your hydrogens and berylliums; this table has Spooge and tight whiteys. 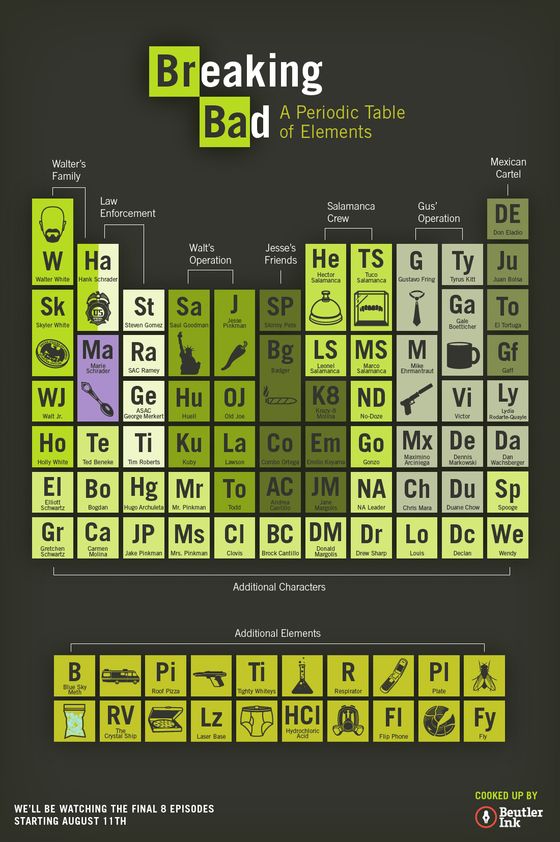 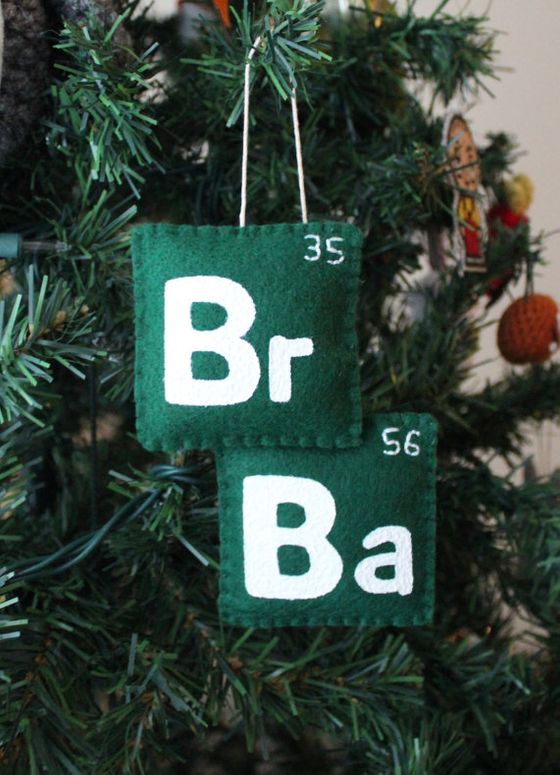 obits 23 mins ago
Cloris Leachman, Sitcom Legend and Oscar Winner, Dead at 94 Her Mary Tyler Moore Show character was so popular that she got her own spinoff, Phyllis.
cancellations 5:58 p.m.
Shrill Is Ending on Hulu After Season 3 Aidy Bryant’s comedy series finished filming its third season in the fall.
vaccine watch 5:36 p.m.
All the Celebrities Who Have Received the COVID-19 Vaccine So wholesome.
By Gabrielle Sanchez
tv 3:45 p.m.
Min Jin Lee and Alan Yang Join Forces for Netflix Series It’s an adaptation of Lee’s 2007 novel Free Food for Millionaires.
fashion du jour 2:32 p.m.
The Bold Type Shutters After 5 Seasons But dot-com is forever.
fall movies fantasy league 2:26 p.m.
Nomadland and Soul Score Big on the AFI and NBR Lists A total of six movies appeared on both the American Film Institute and National Board of Review best-of lists.
By Nate Jones
music videos 2:18 p.m.
Summer Walker and Her Baby Bump Radiate Peace in the “Body” Video The long-awaited music video is here to soothe your soul.
1.5x speed 1:45 p.m.
Greetings From Somewhere 3 More Podcasts Worth Trying Including a series all about Chippendales.
celebrity memoirs 1:35 p.m.
Ted Cruz Nemesis to Publish Memoir Seth Rogen’s first book will be out May 11.
trailer mix 1:10 p.m.
It’s Teen Groundhog Day in the Map of Tiny Perfect Things Trailer And Kathryn Newton seems fine with it.
vulture recommends 1:09 p.m.
Why Not Just Watch Miranda? Sure, you could watch the new American remake, Call Me Kat, starring Mayim Bialik, but there’s a better option.
celebrity 1:04 p.m.
Halsey Announces She’s Pregnant: ‘Surprise!’ The 26-year-old is expecting her first child with Alev Aydin after suffering multiple miscarriages over the years.
new music 1:03 p.m.
Say Hola to Selena Gomez’s First Spanish Project REVELACIÓN Out March 12.
the festival circuit 12:41 p.m.
Cannes Festival 2021 Pushes Its Dates from May to July Why? Because they Cannes.
extremely online 12:36 p.m.
Try Not to Bust a Knee to TikTok’s Instant-Viral #BussItChallenge Looking … respectfully.
stand-up 12:30 p.m.
COVID Didn’t Kill Live Comedy — It Drove It Underground After Governor Cuomo classified live comedy as not “essential,” some NYC club owners decided to roll the dice.
By Dan Reilly
vulture sports 11:32 a.m.
Amanda Gorman Will Grace Us With a Poem at Super Bowl LV The inaugural poet has been tapped to write and recite a poem honoring pandemic heroes.
last night on late night 11:22 a.m.
Colin Firth Confirms Stanley Tucci’s Negronis Are ‘Exquisite’ They’re drunk with power.
stonks! 10:23 a.m.
People Are Heavily Trading AMC Stocks Because of Reddit Where’s Margot Robbie in a bubble bath to explain these things when you need her?
sundance 2021 10:12 a.m.
‘What Would These Two Do on Their Last Day Alive?’ Jerrod Carmichael on his suicide-pact dark comedy, On the Count of Three, debuting at Sundance this weekend.
By Jonah Weiner
More Stories