Woody Allen has written and directed 43 movies, which is a lot of movies. (By comparison, over basically the same time period, Martin Scorsese has made slightly more than half that number.) This body of work has given fans so much to look at, break down, and analyze that on the eve of the release of his 44th film, Blue Jasmine, we decided it was time to give his canon the treatment it deserves: infographics! We translated some of his films’ most iconic moments and jokes into handy-dandy graphs and charts. See exactly why life is worth living for Manhattan’s Isaac, the advantages of being imaginary for Purple Rose of Cairo’s Tom Baxter, where Sleeper’s Miles Monroe says there is intelligence in the universe, and much more. (Scroll to the bottom to see a video supercut of the source material for each graph.) 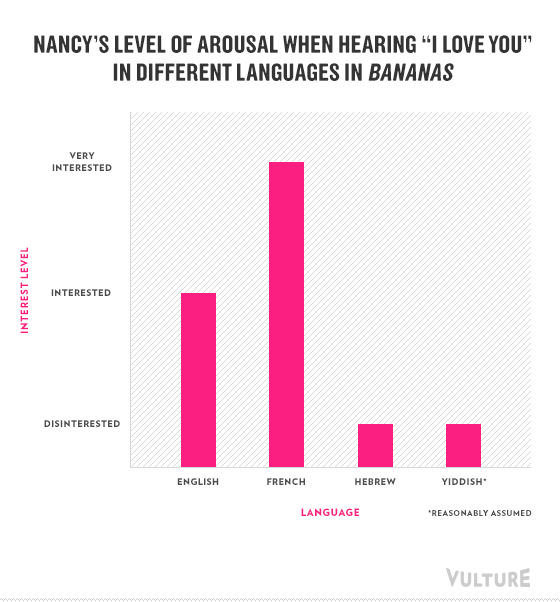 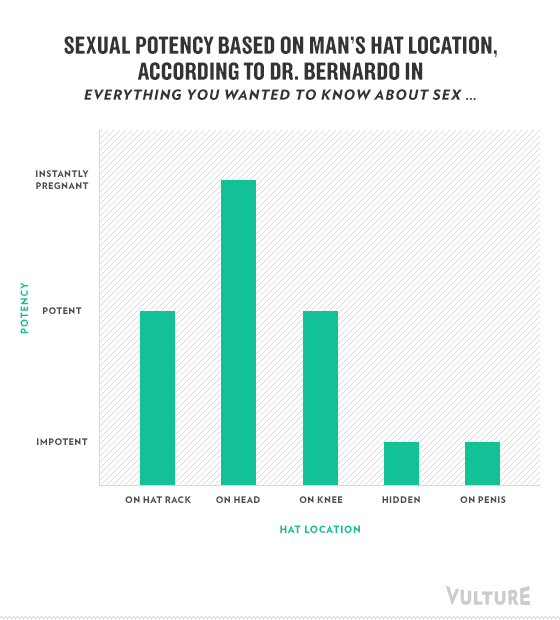 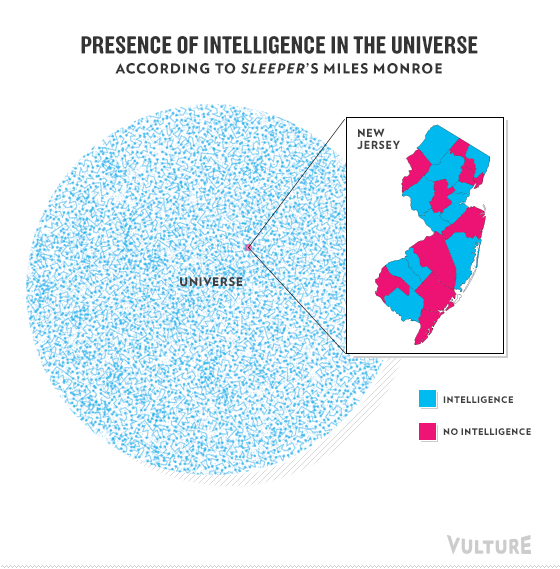 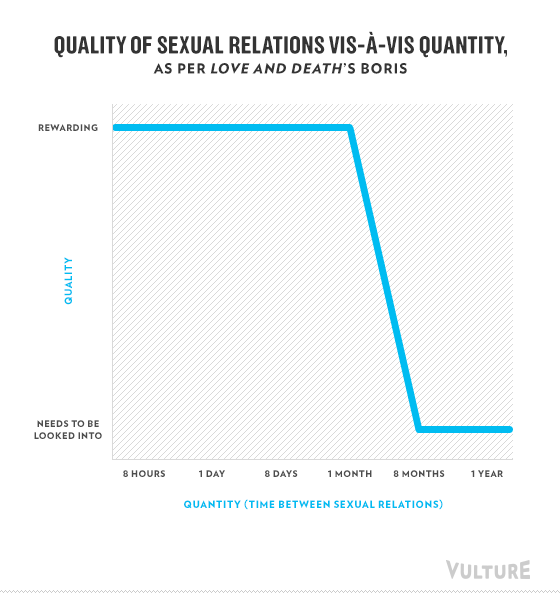 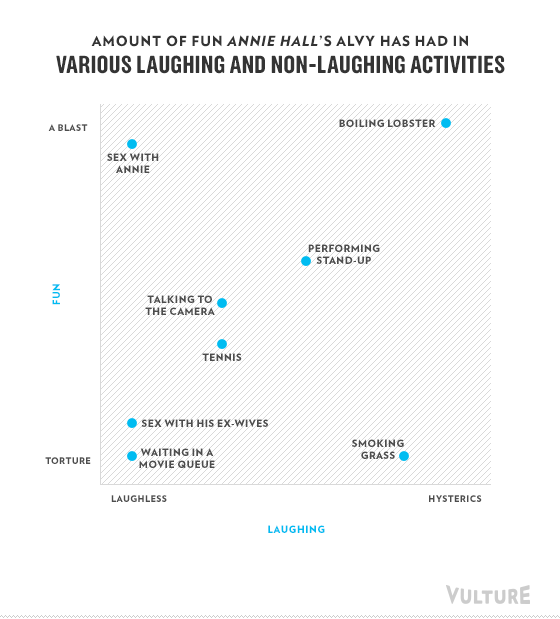 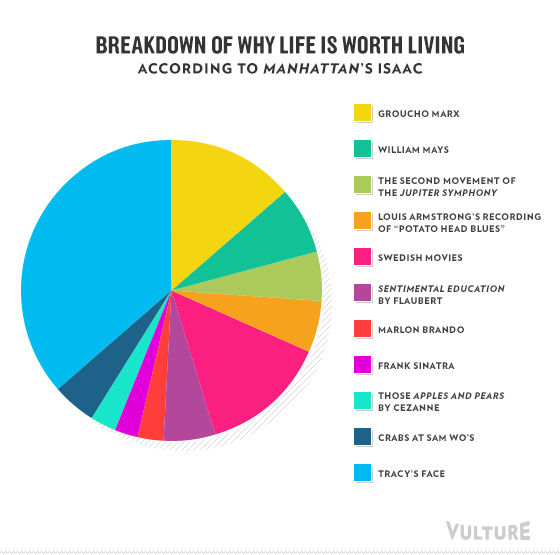 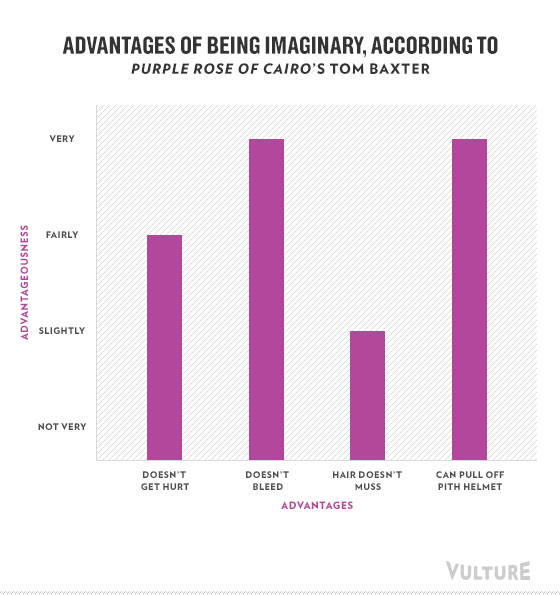 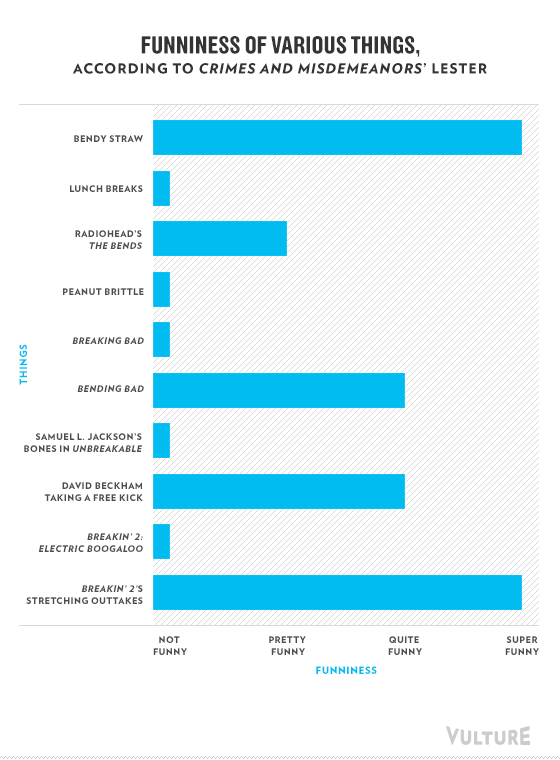 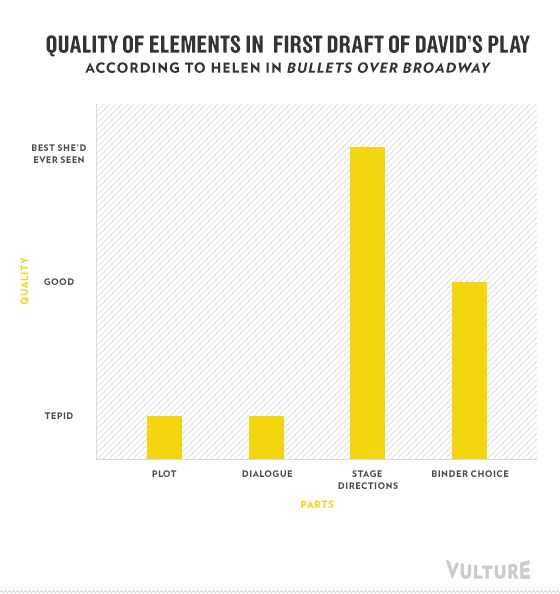 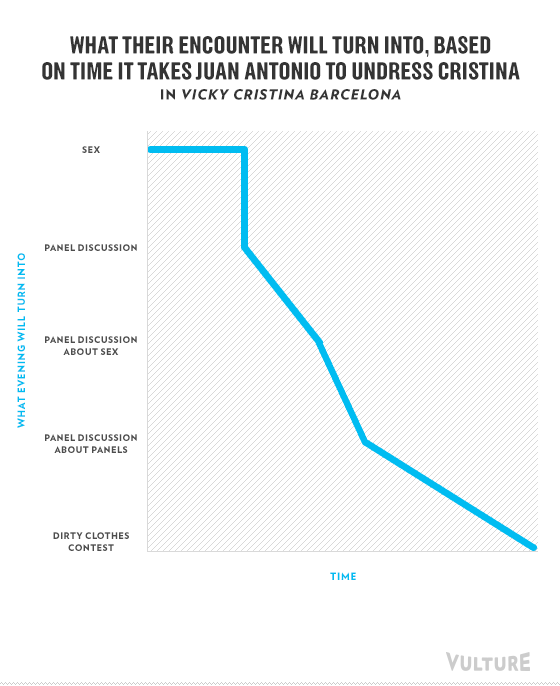 last night on late night Yesterday at 11:01 p.m.
Nick Kroll Speaks for the Spotted Lanternflies on Jimmy Kimmel Live! Also for his new special on Netflix.
overnights Yesterday at 10:32 p.m.
The Real Housewives of Salt Lake City Season-Premiere Recap We’re off to an ominous start as Lisa apologizes to Meredith for last season’s legendary meltdown, to no avail.
coolio Yesterday at 10:00 p.m.
The Entertainment Industry Remembers Coolio Martin Lawrence, Ice Cube, and Questlove all send their love.
overnights Yesterday at 9:35 p.m.
Abbott Elementary Recap: Shark Diving Gregory learns a few hard lessons.
overnights Yesterday at 9:18 p.m.
Real Housewives of Beverly Hills Recap: The Hiltons Are Alive Kathy and Kyle continue to deal with the Aspen fallout and things are not going great!
obits Yesterday at 9:14 p.m.
‘Gangsta’s Paradise’ Rapper Coolio Dead at 59 A legend of ’90s hip-hop.
huh? Yesterday at 7:41 p.m.
Watch Lizzo Play James Madison’s Crystal Flute “History is freaking cool, you guys!”
epcot Yesterday at 7:00 p.m.
A Figment Movie Is in the Works From Seth Rogen, Dan Hernandez, and Benji Samit Journey? Into my imagination?
trailer mix Yesterday at 6:23 p.m.
Watch the Trailer for the ‘Dangerous Liaisons’ Prequel Series Now with significantly less “Lovefool,” by the Cardigans.
exit interview Yesterday at 6:10 p.m.
Sterlin Harjo Is Not Afraid to Sacrifice a Good Idea The Reservation Dogs showrunner leads by instinct: “There are a lot of first ideas out there. You have to break through that for it to be good.”
finales Yesterday at 5:25 p.m.
Reservation Dogs Grew Up With the Help of Its Grown-ups In learning from their elders this season, the Rez Dogs found themselves and refound each other.
the law Yesterday at 5:20 p.m.
Everything We Know About PnB Rock’s Murder So Far On September 28, police arrested two suspects and identified Freddie Lee Trone as another.
vulture investigates Yesterday at 5:17 p.m.
What Are Tom Hanks’s 4 ‘Pretty Good’ Movies? An Investigation. Hanks might have been joking when he said he’d only made four “pretty good” movies. But what if he wasn’t?
By Nate Jones
no small parts only supporting Yesterday at 3:30 p.m.
The Golden Globes Are Making Even More Golden Globes There are now four supporting-actor categories instead of two.
fact vs fiction Yesterday at 2:51 p.m.
What’s Fact and What’s Fiction in Blonde? Was Marilyn really paid less than Jane Russell for Gentlemen Prefer Blondes? Did she hate working on Some Like It Hot? What about those affairs?
By Esther Zuckerman
health updates Yesterday at 2:28 p.m.
Katie Couric Hopes Sharing Breast Cancer Diagnosis Saves Lives “Please get your annual mammogram.”
coming soon Yesterday at 2:10 p.m.
Tár Trailer: Cate Blanchett Conducts Her Own Demise … in a performance that won the Best Actress prize at Venice.
blonde Yesterday at 2:00 p.m.
Onscreen Marilyns, Ranked Marilyn Monroe’s image is iconic, but few actresses have managed to channel what made her a star.
my single is dropping Yesterday at 1:33 p.m.
Paramore Finally Left the House to Drop ‘This Is Why’ With an album of the same name to follow on February 10.
this month in comedy podcasts Yesterday at 1:19 p.m.
This Month in Comedy Podcasts: Hopped Up on Black Betties with Patton Oswalt Rounding up our favorite comedy-podcast episodes of the month.
By
More Stories