This spring, John Mayer was named the fourth most hated celebrity in Hollywood by Star magazine (sixteen spots ahead of Chris Brown). This is despite the fact that Mayer has basically been out of the public eye for three years. He hasn’t done anything to make the situation worse, but he also didn’t really do anything to make the situation better. Apparently, releasing arguably the best two albums of his career was not enough. But we want you to have a chance to enjoy last year’s Born and Raised and the new Paradise Valley, which came out yesterday, without being clouded by images of angry exes or cocky-bastard quotes. So Vulture has devised a seven-point plan to help you move past any residual ill will, chill out, and just listen.

Step one: Look at his goofy guitar-solo face.
Yeah, it’s silly and dumb, but don’t we like silly and dumb? At least they’re not sex faces; they’re more like a cross between having to sneeze and joking around with a baby you see on the train. (Here’s more evidence.) The first step to liking John Mayer is thinking of him as less a douchebag bro and more a gangly Muppet. A Muppet maybe named Mohn Jayer?

Step two: Learn about his crippling throat problem.
Mohn Jayer hasn’t toured since 2010, largely because of a vocal cord granuloma that not only needed multiple surgeries (including Botox injections) and prevented him from singing, but completely changed “everything” about his voice. He told Rolling Stone: “I don’t have the projection. My laugh changed. The way I used to laugh is kind of like that ‘I’m embarrassed,’ high-pitched laugh. I don’t really laugh that way anymore. I’ve found new ways around everything — new ways to talk, new ways to laugh.” His laugh changed! He probably doesn’t even recognize himself when he watches America’s Funniest Home Videos: You’ve got to feel at least a little bad for him. No? You still find him annoying?

Step three: Realize that he also found himself annoying.
After a series of dumb behavior, Jayer decided to move full-time to Montana. Years removed, he seems to understand why you hated him. He agrees with you. Here’s him calling himself an idiot on Ellen last year:

This is the song Taylor Swift and Mohn Jayer did together in 2009. This is where all that drama started.

Both these songs are like 12 million times better. Considering that we don’t actually know either Taylor or Jayer, and that all we as bystanders tangibly get out of their failed dumb “relationship” is the music (as opposed to the intangible waves of Schadenfreude), ultimately all their annoying celebrity he-said-she-said adds up to a win because it resulted in their music improving. 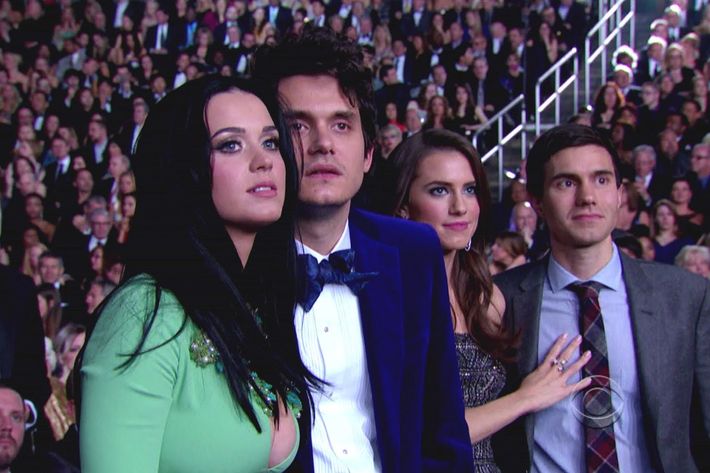 Obviously, focusing too much on Jayer’s personal life is problematic, but this is pretty damn cute. Jayer and CollegeHumor co-founder Ricky Van Veen are friends, Katy Perry and Allison Williams are friends, and all together they make for a fun-looking double dating situation. What do you think they talk about? The Internet? And when they all go out to dinner or the mall, who sits in the back? And while we’re here, Katy Perry’s duet with Jayer on Paradise Valley is kind of really good and they make a lot of sense together.

Step six: Repeat the words Frank Ocean can’t be wrong, Frank Ocean can never be wrong.
Fact: Frank Ocean is a perfect young man with a perfect young man’s smile. Which means he must be infallible. So, if he can be friends with Mohn Jayer, then there must be something there. Jayer appeared on “White” off Ocean’s channelOrange and in the video and SNL performance for “Pyramid”  (where he played a particularly great solo). And now, as friends, Ocean appears on Paradise Valley, singing the understatedly pretty “Wildfire.”

Also, remember for a time Jayer was friendly with Dave Chappelle, which is pretty cool.

Sometimes you just need to wash yourself clean of your preconceived notions about a person’s past strummy-strum-strum music and douchey behavior and try to look at him fresh. In a way, over his last two albums, Jayer has become a different artist — one with a new, ailment-altered voice and a songwriting and guitar-playing style that has a lot more to do with actual folk music than the type of turn-of-the-millennium pop-folk he was the biggest star of. Paradise Valley is Mohn Jayer’s tribute to his Montana home and intentionally conjures the calm and vastness of America’s open spaces. It’s a mellow record (unsurprisingly) for when you’re in a mellow mood, and Jayer gets that’s all it has to be. As he told Billboard, “There’s a time and place for my records. I don’t mind being the guy you call up for this one moment where you appreciate it but you don’t necessarily have to give your life over to it.”