In the trailer for the new season of Homeland, we catch a brief glimpse of a notebook that appears to be Carrie’s. In it, she has scrawled some pretty unintelligible stuff about her investigation into Abu Nazir, Nicholas Brody, and the CIA. But our close analysis reveals that perhaps Carrie has a co-author on this notebook. Let’s take a closer look. 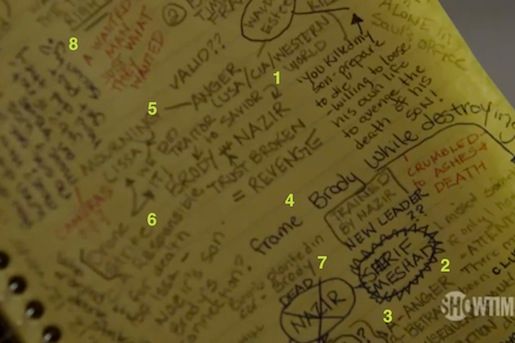 1. “You killed my son – prepare to die.” Willing to loose [sic] his own life to avenge the death of his son!
The most glaring thing here is that the ultra-exacting Carrie has misspelled “lose.” It’s also at least a small nod to Mandy Patinkin’s famed Princess Bride line. But part of the idea is in quotes, indicating that someone has said that exact phrase. Abu Nazir is the obvious person, but maybe it was Brody, indicating just how strong a bond he felt with Issa, which the show has been insisting on for two seasons, even though Brody has a biological son that he seems not to care that much about.

2. I missed something … if only I had paid ATTENTION. There must have been CLUES…
This has been Carrie’s refrain since season one, that she “missed something” (usually it seems like she was referring to 9/11, though). Not sure how helpful it is for a CIA agent to write down “clues,” but okay.

4. frame Brody while destroying the…
The writing in this phrase makes it look like more than one person was contributing to this crazy-note. Look at the way the Y is shaped in Brody here: one continuous pen-stroke, round U-shaped bottom, and a tale that curls like a J. Now look at the Y in “you killed my son.” That Y was made with two strokes, with a straight V-shaped body and a straight line for the tail. Another conspiracy!

5. Mourning (Issa)? Anger (USA/CIA/Western World)? Traitor to savior … Brody w Nazir
Yes, this is the plot of Homeland. But “savior” is an interesting choice of words — it’s not the opposite of a traitor, per se, and the role of savior is very different than the one of, oh, a hero, or a prophet, or a leader. Savior is a tall task.

7. NAZIR (DEAD) – SHERIF MESHAD TRAINED BY NAZIR (NEW LEADER??)
Again, Carrie is not clear on spelling. Perhaps she has a learning disability?

midnights era 2 mins ago
Wait, Is Taylor Swift Just Giving Us Straight Answers? Not like the videogame. Or maybe exactly like the video game?!
surprise surprise 14 mins ago
Ye Thought Wearing a White Lives Matter Shirt Would Be ‘Funny’ He addressed his Paris Fashion Week controversy in an interview with Tucker Carlson.
overnights Yesterday at 10:41 p.m.
Atlanta Recap: Mr. Chocolate and the Black Movie Factory What Van believes will be a quick adventure in a Tyler Perry–esque production turns into a pivotal moment for her as a mother.
theater review Yesterday at 10:00 p.m.
The Revived and Reinvented 1776 Is a Delight, If You Can Stand to Watch It If you’re going to stage this show despite all its problems, this is how to do it.
health Yesterday at 9:32 p.m.
Justin Bieber’s World Tour Is Officially Postponed Until the Spring He previously paused the tour due to facial paralysis caused by Ramsay Hunt syndrome.
overnights Yesterday at 9:01 p.m.
Ghosts Recap: Alberta’s Turn The female-empowerment vibes are at an all-time high over at the Woodstone B&B.
trailer mix Yesterday at 8:02 p.m.
RHOBH Reunion Trailer: It’s Kathy Hilton vs. Lisa Rinna “You are the biggest bully in Hollywood, and everyone knows it.”
under oath Yesterday at 6:46 p.m.
Kevin Spacey’s Sex-Abuse Trial Is Already a Mess Spacey, wearing a slate suit, snow-white shirt, and powder-blue tie, did not appear worried.
jinkies Yesterday at 6:02 p.m.
Mindy Kaling and Constance Wu Are Solving the Mystery of Velma The first teaser for HBO Max’s Scooby-Doo spinoff dropped at New York Comic Con 2022.
good one podcast Yesterday at 5:05 p.m.
How Sam Morril Gets Laughs Between Laughs “It’s almost like a hesi move in basketball. Like, how can I get my jump shot wide open?”
By Jesse David Fox
coming soon Yesterday at 4:53 p.m.
It’s a-Here, Mario! Chris Pratt, look how you massacred our boy.
chat room Yesterday at 4:52 p.m.
John Macmillan Shot Laenor’s House of the Dragon Escape on His First Day on Set “It was a really stormy day, and we were out in the ocean in this massive hundred-year-old boat.”
future trash Yesterday at 4:27 p.m.
John Waters, Pope of Filth, to Direct Adaptation of His Book Liarmouth “Maybe it’s fitting that my novel was shocking enough to jump-start the engine of my film career.”
overnights Yesterday at 4:24 p.m.
She-Hulk: Attorney at Law Recap: Murdock & Walters Charlie Cox’s Daredevil returns to the MCU — and begins flirting immediately.
best of 2022 Yesterday at 4:00 p.m.
The Best Video Games of 2022 (So Far) It’s been a really, really, really full year.
coming soon Yesterday at 3:45 p.m.
Glass Onion: A Knives Out Mystery Headed to Theaters After All But only for a week.
highway to hell Yesterday at 3:01 p.m.
The Live-Music Industry Is Broken Supply-chain issues, mental health crises, positive COVID tests. As artists continue to struggle, is any of this even worth it?
vulture guides Yesterday at 3:00 p.m.
A Grey’s Anatomy Catch-Up Guide, No Matter How Far Behind You Are Everything you need to know before jumping back in.
By Maggie Fremont
movie review Yesterday at 2:50 p.m.
Tár Brilliantly Undoes an Ego Monster of an Artist Cate Blanchett is toweringly great as a famous conductor who meets a very public downfall.
buffering Yesterday at 2:26 p.m.
It’s Time to Start Worrying About Peacock Can the streaming service come back from the dead?
More Stories