Adam Scott and Adult Swim are making another Greatest Event in Television History, following in the noble footsteps of 2012’s shot-for-shot remake of the Simon and Simon opening (with Jon Hamm) and this year’s Hart to Hart opening (with Amy Poehler). What will the new installment re-create? This couch is our only clue. 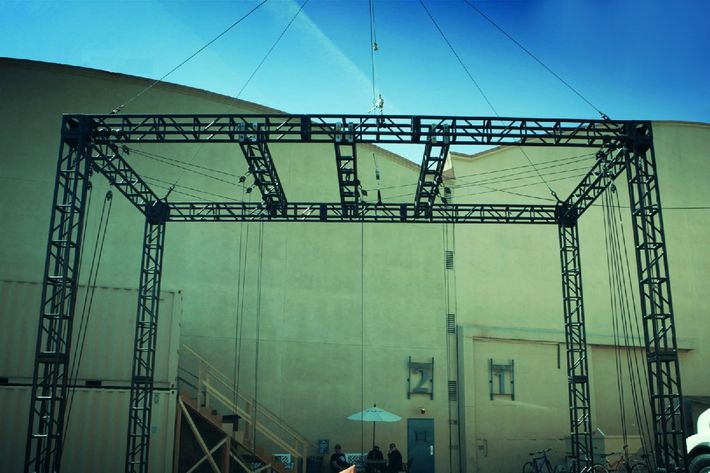 This great event will air on November 7 at midnight.

+Comments Leave a Comment
The Next Greatest Event in Television History

trailer mix 3 mins ago
Joseph Gordon-Levitt Gets a One-Star Rating for Yelling in Super Pumped Trailer  Travis Kalanick’s tumultuous rule is immortalized in a new Showtime anthology.
i couldn't help but wonder 5:30 p.m.
How Are the New And Just Like That … Characters Still Just Meeting Each Other? Why did it take so long to get Seema, Nya, and Lisa on the same set?
buffering 5:00 p.m.
Peacock Now Has 17 Million Subscribers But it’s also losing a lot of money for Comcast.
good one podcast 4:50 p.m.
The Birth of UnCabaret Was Just What Comedy Needed  Beth Lapides, the creator of the long-running live L.A. show, joins this week’s Good One.
role call 2:02 p.m.
Matthew Lillard and Skeet Ulrich Answer All Our Questions About Scream “Looking back on this has been like looking back on the first love of your life.”
By Jordan Crucchiola
my single is dropping 1:31 p.m.
Charli XCX and Rina Sawayama Answer Our Begging, Drop ‘Beg for You’ Featuring an extremely well-executed sample of “Cry for You” by September.
yeezy season 1:18 p.m.
Ye Announces Donda 2, in Case You Haven’t Gotten Enough of Him Out February 22, or 2/22/22.
nominations 12:38 p.m.
PGA Noms Boost Tick, Tick … Boom! and Being the Ricardos Oscar Odds Spider-Man: No Way Home did not receive a nomination.
nevermore 12:13 p.m.
Nicolas Cage’s Pet Crow Thinks He’s an ‘Ass’ But he likes “the goth element.”
west side story 12:03 p.m.
A Timeline of the Allegations Against West Side Story’s Ansel Elgort West Side Story co-stars Rachel Zegler, Ariana DeBose, and Rita Moreno addressed the claims over a month after the premiere.
vulture 10x10 12:00 p.m.
The Indie Puzzle 33-Across: “Dear Evan Hansen” prop.
music supervision 11:28 a.m.
Yellowjackets and Euphoria’s ’90s Music Is Filling a ‘Void of Angst and Anger’ Music supervisor Jen Malone breaks down the two shows’ musical fixations and teases some tracks still to come.
overnights 11:00 a.m.
And Just Like That … Recap: Put a Ring on It Everyone is having relationship issues.
this! is! a fun quiz! 11:00 a.m.
Can You Answer the Jeopardy! Clues Amy Schneider Couldn’t? Probably not! Well, maybe. Why don’t you try and see?
By Devon Ivie
podcasts 10:51 a.m.
There’s a New Serial Productions Podcast Coming Next Week In which Brian Reed of S-Town fame tackles a controversial event from recent British history.
racism 10:15 a.m.
Bravo Fires Jennie Nguyen From The Real Housewives of Salt Lake City Nguyen responded on Instagram Live, apologizing on one hand and digging a deeper hole with the other.
he's running Yesterday at 11:34 p.m.
The Daily Show: Ronny Chieng Wants to Be a Supreme Court Justice He has a law degree, hello!
celebrity engagements Yesterday at 9:58 p.m.
Macaulay Culkin and Brenda Song Are Engaged Please reunite the Pizza Underground to play the reception.
theater review Yesterday at 9:00 p.m.
Skeleton Crew, Transferred Uptown, Loses Some Muscle Phylicia Rashad and company try to make a small show fill up a big stage.
my single is dropping Yesterday at 8:33 p.m.
Listen to Machine Gun Kelly Cover Frank Ocean’s ‘Swim Good’ Apparently MGK thinks he can swim better.
More Stories