Summer’s over, everyone! Especially at the box office. One of this weekend’s wide releases, Getaway, currently has a Rotten Tomatoes rating south of 5 percent. Five percent! Another one is a concert documentary about the boy band One Direction. Slim pickings. But it could be worse. It honestly could be so much worse. We’ve taken a look at every summer weekend from the past twenty years and picked eight that are strong contenders for rock bottom. (We’re talking qualitatively here — box office wasn’t really a factor in these choices.) Please offer up your own suggestions. 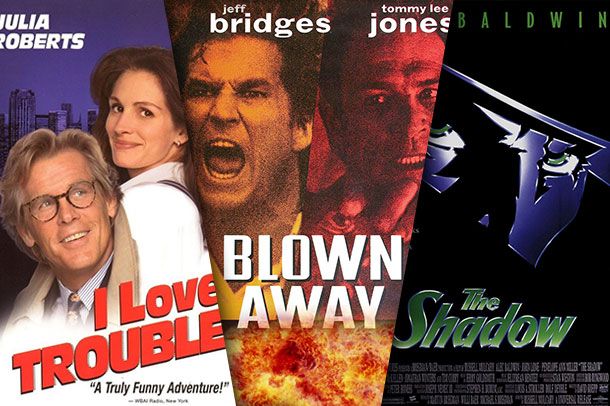 These days, the Fourth of July weekend is sacrosanct for Hollywood. Though there were several prior examples of blockbuster early-July weekends (Terminator 2), 1996’s Independence Day, which established Will Smith as the king of that weekend for a time, set the standard. Looking at 1994’s Fourth of July weekend makes us think that every studio exec mistakenly got the same bad calendar that year — surely no one thought that any of these movies were worthy of such a prime multiday-weekend slot, right? There was Alec Baldwin in The Shadow, an incoherent adaptation of the thirties pulp-radio series (did no one associated with The Lone Ranger learn from this?); Jeff Bridges and an Irish-accented Tommy Lee Jones in Blown Away, a formulaic thriller that invited critics to say things like “you won’t be”; Julia Roberts and Nick Nolte in I Love Trouble, a screwball romantic comedy without the romance or the comedy, probably because it starred Nick Nolte, who is incapable of either; the John Hughes–scripted Baby’s Day Out, about a baby lost in the big city; and Little Big League, which took the kids-in-the-majors theme that Rookie of the Year succeeded with the year prior and struck out swinging. (Disney’s The Lion King, in its third week of release, dominated that box-office weekend, grossing three times what The Shadow did in the No. 2 slot.) 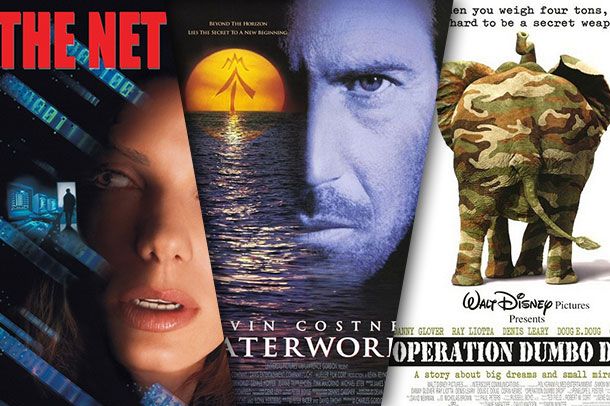 There’s plenty of blame to spread around here. The obvious starting point is Kevin Costner, whose bloated flop consistently shows up on lists of the worst movies ever made. But let’s not absolve The Net’s goofy script, which hinged on such implausible hacker hysteria that PC Magazine declared it “the absolute worst film ever about the Internet,” or Disney’s “sanitized” and “sentimentalized” version of the Vietnam War in Operation Dumbo Drop. 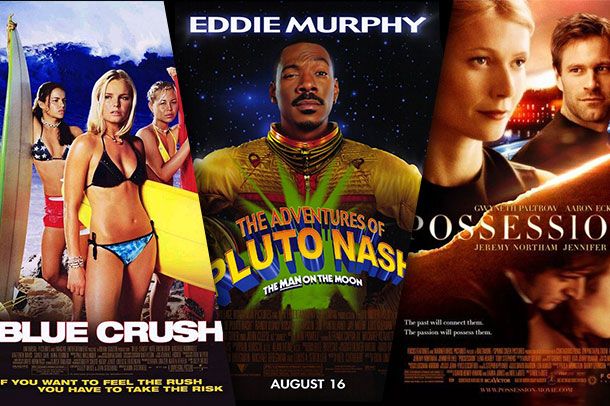 Sure, neither Blue Crush nor Possession is anything to write home about, but Eddie Murphy’s spectacular bomb bumps this weekend above most other weekends. That’s how bad it was. And Warner Bros. knew it. The idea was born in the eighties, endlessly refined in the nineties, and finally shot in 2000, only to be left on the shelf for two years. After costing $100 million to shoot and $20 to market, The Adventures of Pluto Nash made all of $7 million at the box office.

The only idea worse than a Dumb & Dumber prequel without the Farrelly brothers behind the camera might have been Hollywood’s preposterous attempt to make Josh Hartnett a star. By recasting the roles of Harry and Lloyd, Dumb and Dumberer never stood a chance and naturally opened itself up to the film critic’s favorite critique: “If nothing else, they got the name right.” Meanwhile Hollywood Homicide aimed for buddy-cop action-comedy in the Lethal Weapon vein and ended up being “painfully unfunny,” “plodding,” and “exasperating.” It’s hard to say which of the movie’s stars came across as more somnambulant, Hartnett or Harrison Ford. Rugrats Go Wild was the third Rugrats movie, a crossover between the show’s characters and those from the Nickelodeon show The Wild Thornberrys.

May 22, 2009
* Night at the Museum: Battle of the Smithsonian
* Terminator Salvation
* Dance Flick

Let’s take stock: What we have here is a cash-in sequel, an unnecessary addition to a classic series, and an aggressively stupid spoof film hitting theaters all at the same time. The first two were special-effects-heavy nightmares, but not because of CGI. Everyone seems to agree that Night at the Museum had incredible effects, it was just lacking “actual comedy,” while Terminator Salvation looked great despite a story that was “a confused, humorless grind, with nobody, from the stars to the set designers, prepared to prick its self-importance.” If those two were simply bad, the Wayans brothers’ spoof Dance Flick was predictably awful. Really, the best thing to come out of this weekend was the Christian Bale–inspired song “Are You Professional.”

SATC2 was a hasty attempt to cash in on the first movie that subjected viewers to 147 minutes of a rich lady’s vacation footage, which seemed “conceived primarily to find new and more cynical ways to abuse the loyalty of its audience.” As SATC2 killed off one series, Prince of Persia was supposed to start another. Jerry Bruckheimer and Disney saw it as the new Pirates of the Caribbean and they blew cash on it like they truly believed it to be true. But, after nearly a decade of stops and starts, when PoP arrived it was clearly “destined to disappear into the quicksand of time, too innocuous to be hated, too bland to be remembered.” Also, Jake Gyllenhaal’s hair. 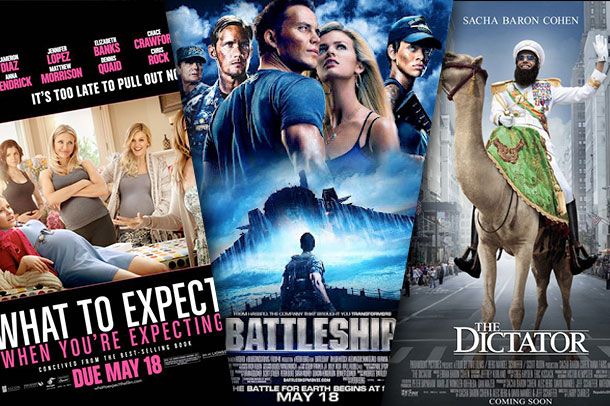 One day, depending on how the next few years pan out, historians will look back at this weekend and mark it as the death of both Taylor Kitsch and Sacha Baron Cohen. Not that Battleship’s dismal failure was Kitsch’s fault, but when a $200 million behemoth that’s supposed to launch a franchise ends up the “kind of summer movie that softens your brain tissue without even providing the endocrine burst of pleasure that would make it all worthwhile,” it’s going to take down some casualties. The Dictator wasn’t as bad, but it continued Baron Cohen’s downward slide — from Borat to Bruno to a movie that turned “material both fresh and rancid into tepid gruel.” Lastly, there was the ensemble rom-com named for an advice book that amounts to a “dirty diaper bag of sex jokes, sentimental mush, cartoonish claptrap and weary parent-to-be cliches.” The sad news here is that we probably have many more star-studded ensemble comedies (how many holidays are there in the calendar year?) to look forward to.

+Comments Leave a Comment
What Was the Worst Summer Movie Weekend?