The search for the next great prestige drama goes on. But the search for the next boffo, throw-everything-at-the-wall drama has ended. We have found the show. That show is Sleepy Hollow. And it’s kinda good! To the premiere’s credit, it’s a confident, well-paced pilot with a few genuine surprises and healthy amount of self-aware humor. It’s also a mishmash of every conceivable myth and story and construct. Here’s a list of everything that got crammed into the Sleepy Hollow pilot. Just the pilot!

Ichabod Crane
Okay, that’s the guy from the original “Sleepy Hollow” story. In the short story, though, Crane is a sort of dumpy schoolteacher who winds up believing a local legend about a headless horseman, the ghost of a German mercenary who fought for the British in the Revolutionary War. Crane is trying to win the heart of Katrina, the local heiress, but she instead picks megajock and talented trick-rider Brom Bones. One night, on his way home from being rejected, Ichabod encounters what he thinks is the headless horseman. They race through the woods, and eventually the HH chucks his head at Ichabod, nailing Crane right in the noggin and knocking him off his horse. The next day, Ichabod has disappeared, but a search party in the woods finds his hat — and a shattered pumpkin. Brom Bones is suspiciously happy about all of it. (You can read the whole story for yourself.) On the show, Crane himself is the Revolutionary War soldier, and he’s not dumpy at all; in fact, he’s handsome and charming and married to Katrina. He also decapitated a British combatant in the heat of battle, and that solider went on to become …

The Headless Horseman
Again, that’s from the original story. But the story strongly implies that there’s no actual ghost, but rather that Brom Bones is a jerk who throws pumpkins at people. On the show, the HH is a scary murderer who likes to decapitate people with his broad ax, but he will also happily shoot people with his many, many guns, too.

Rip Van Winkle
The show doesn’t say it’s reinterpreting the Rip Van Winkle story, but it is: On Hollow, Ichabod suddenly wakes up in the present day, even though he’s from the 1800s. (No crazy beard, though.)

The Bible
So this is when things get nuttier. It turns out this headless horseman is actually one of the horsemen of the apocalypse. “When I beheaded him, that man didn’t die,” Ichabod explains. “Because he was never a man at all. He is death itself. And somehow, he has returned to Sleepy Hollow to finish what he started.”

Signs
Abby winds up bonding with Ichabod because she herself had an unexplained supernatural experience. When she was younger, she and her sister were in the woods when they came upon four white trees, which gave Abby a bad feeling. Then a freaky forest demon spoke to them, and when Abby and her sister tried to tell other people, no one believed them. What is that freaky forest demon? The implication is that he’s the Devil, but his blurry body and herky-jerky gestures make him look like the aliens from Signs.

Witches!
Ichabod Crane was able to hibernate, without aging, for 250 years, because his old-timey wife was a witch, and she cast a spell on him. On the battlefield, Ichabod’s blood and the HH’s blood had mingled, and so she had to put both of them under a spell to prevent the dawn of the apocalypse: Ichabod got put in a cave (Jesus-y!) and the Horseman was entombed under water. Now they’ve both been awaked by the forces of evil. (Perhaps in the form of a freaky forest demon. Seriously.) Also, it turned out the sheriff — freshly murdered at the hands of the Headless Horseman — was starting to investigate Sleepy Hollow’s history of witchcraft, and he discovered that Abby’s freaky forest monster sounded just like other stories people had been telling since the 1800s. According to the Sheriff’s investigation, those white trees are somehow part of the horseman of the apocalypse stuff.

Vampire Stuff
The Headless Horseman can’t survive in the sunlight. That’s not part of any other kind of horseman mythology, as far as I can tell.

Futurama
One of the things the Headless Horseman wants — other than to be … death? — is his head back. His head is in a sturdy glass case, which is either an amazing Futurama homage or just an amazing accidental Futurama homage. 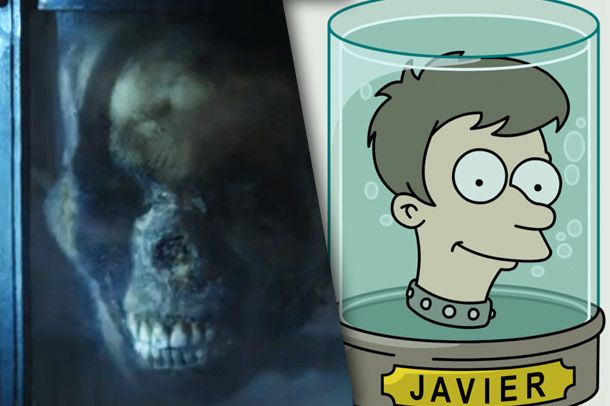