Was our last Breaking Bad Easter egg not heavy-handed enough for you? How about this one, noticed by Jhoff57 at Reddit?

Walt’s breakdown after witnessing Hank’s death looked mighty similar to the flashback in which Gus witnesses the death of his “hermano” (as in, “Los Pollos Hermanos”) Max Arciniega at the hands of Tio Salamanca. Is this foreshadowing that Walt will seek revenge just as Gus did? Perhaps.

Also reminiscent? The text and imagery from the episode’s namesake, “Ozymandias.”

Half sunk, a shattered visage lies, whose frown
And wrinkled lip, and sneer of cold command 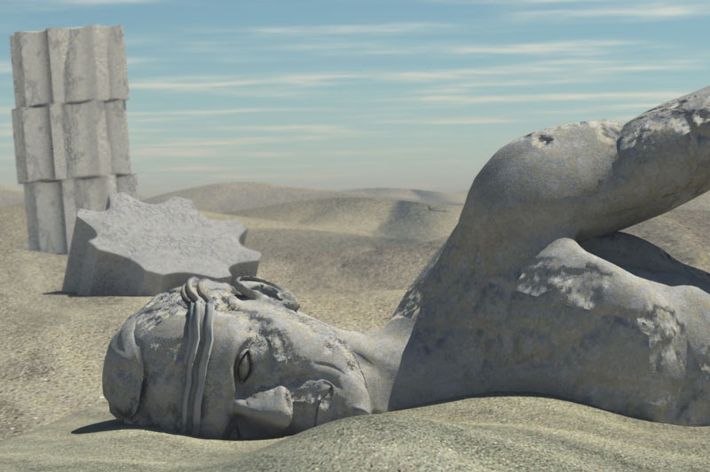 overnights 8 mins ago
Obi-Wan Kenobi Recap: Second Chances What feels a bit like Taken in space pivots to “John Wick: Chapter 2 in space” territory — and it works!
still learning 1:58 p.m.
Isaiah Rashad Comes Out as ‘Sexually Fluid’ in First Interview About Sex Tape “I’m not in full control of, when I walk into a room, of who I’m attracted to,” he told Joe Budden.
overnights 1:31 p.m.
Stranger Things Recap: This Old House We get a little haunted-house movie in the middle of Stranger Things!
courthouse chaos 1:30 p.m.
Johnny Depp Fans Are Out in Full Force As Trial Nears End When the clock hit 12:50 a.m. Friday, bedlam unfolded outside the Fairfax, Virginia, court parking garage.
summer preview 1:11 p.m.
What Will Be the Biggest Movie of the Summer? Vulture bets on five films that will break through the hottest months of 2022, in whatever ways they can.
By
summer preview 1:00 p.m.
10 Podcasts We Can’t Wait to Listen to This Summer From a new season of Slow Burn on Roe v. Wade to a “surf-rock audio drama” from a rising star.
in memoriam 12:57 p.m.
10 Essential Ray Liotta Performances From “mesmerizing newcomer” to legendary tough guy, Ray Liotta was magnetic onscreen.
hunter's line reading 12:53 p.m.
This One Ray Liotta Line Plays on a Loop in My Head The late actor’s performances operate on the edge of ravenous and resigned, but he’s almost pious in his line reading as a shark of a divorce lawyer.
By Hunter Harris
overnights 12:38 p.m.
Top Chef Recap: Tucson Time After studying the culture and traditions of Tucson, the chefs are focused and ready to push through the few remaining obstacles.
movie review 12:36 p.m.
The Comfortable Familiarity of The Bob’s Burgers Movie If you accept the narrative’s rigidity and safety, The Bob’s Burgers Movie is a jubilant bit of distraction.
overnights 12:22 p.m.
Grey’s Anatomy Season-Finale Recap: Hail to the Chief Grey’s makes the most of its 400-episode history with a finale that resets the game while paying homage to the past in some moving ways.
chat room 12:05 p.m.
Laura Haddock Was Gently Hazed While Filming Downton Abbey: A New Era Confirmed: A certain Crawley is a “cheeky monkey.”
vulture 10x10 12:00 p.m.
The Mustache Puzzle 1-Across, Four Letters: Song danced to with flailing arms.
scooby dooby doo 11:43 a.m.
I Ate All the Lyrics of Harry’s House Sure, the new Harry Styles album sounds really good, but how does it taste?
labor struggles 11:24 a.m.
How Was This Harry Styles Music Video Only $300? Was anybody paid?!
nostalgia bait 11:00 a.m.
The Horniest Decade: A Taxonomy Why did the early aughts have such weird sexual energy?
this week in late night 10:47 a.m.
James Corden, Auteur Director, Won Late Night This Week Plus Desus & Mero & Jerrod Carmichael’s strong greenroom energy.
vulture lists 10:32 a.m.
What to Watch and Stream This Memorial Day Weekend Travel the many multiverses, visit the Upside Down, check out Tom Cruise’s and Channing Tatum’s abs, and more this three-day weekend.
overnights 10:31 a.m.
Obi-Wan Kenobi Premiere Recap: Our Only Hope The first chapter of Obi-Wan’s new story excels when it accumulates silent details and small interactions from his lonely routine.
yike! 10:28 a.m.
‘How to Murder Your Husband’ Writer Convicted of Murdering Husband Not a How to Get Away With Murder writer, clearly.
More Stories