The season finale of Breaking Bad just began on the East Coast, but immediately beforehand, AMC re-ran the penultimate episode, “Granite State.” This time around, we took a few screengrabs of the newspapers Walt had been reading while on holiday at the sad New Hampshire cabin. The news stories he clipped out indicated that he had spent much of his time at the cabin obsessing over what had been going on back home. But what did those clippings he taped to the wall actually say?

Not surprisingly, many of the items hanging on the cabin wall are too hard to read in the brief time they flash on the screen. But one clipping in particular stands out. 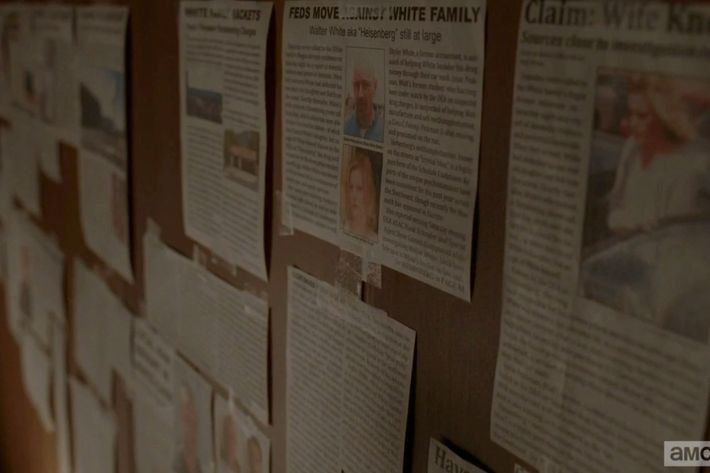 The most visible story reads:

… Skyler White, a former accountant, is accused of helping White launder his drug money through their car wash. Jesse Pinkman, Walter’s former student who had long been under watch by the DEA on suspected drug charges, is suspected of helping White manufacture and sell methamphetamines, a Class C Felony. Pinkman is still missing and presumed on the run.

Heisenberg’s methamphetamine, known on the streets as “crystal blue,” is a highly pure form of the Schedule 1 substance. Reports of the unique psychostimulant have been consistent for the past year across the Southwest, though recently the blue meth appeared in Europe.

Also, was Walt reading The Family Circus? Is that the comic strip seen on the upper left of the image below?

Because that would make some sense: Walt has always said that he’s doing all this for his family. Maybe Heisenberg is just a pal of Ida Know and Not Me, one of those unseen gremlins the comic strip’s little Billy and Jeffy blame when they get caught doing something naughty.