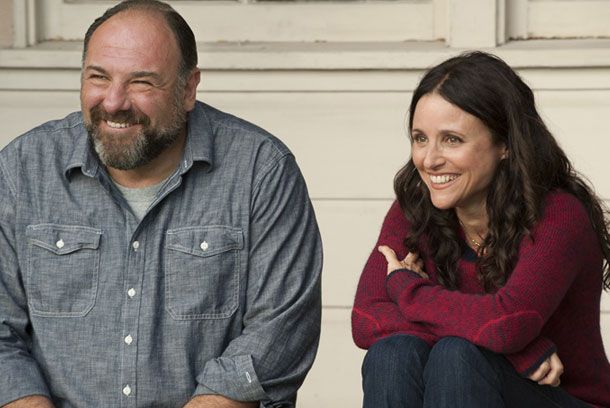 Say the name James Gandolfini, and it will likely conjure memories of him playing the tough-guy roles for which he was best known. However, in his final leading role, as Albert in the rom-com Enough Said, the late actor displayed another side of his onscreen range, a side more closely associated with the real person he was off camera. To friends and family, he was Jim, an actor who was affable and easy to work with; at times, he was even self-deprecating and funny, much like the character he plays in Nicole Holofcener’s movie.

In this new film, Gandolfini plays a divorced man who meets Julia Louis-Dreyfus’ character Eva, at a party neither of them wants to be at. Also divorced, Eva is a massage therapist, whose daughter is getting ready for college. At the party, Eva also picks up a new client Marianne, played by Catherine Keener, who just so happens to be Albert’s ex-wife. Without realizing the coincidence until she’s already involved with Albert, Eva listens to Marianne’s unfiltered diatribes about Albert’s faults—down to his bedroom behavior.

Despite his flaws, Albert is kind-hearted and quirky in a way that makes him loveable. Eva sees the good in him, but also the bad and the ugly thanks to Marianne’s merciless criticisms of him. In a culture where a simple Google search might expose more details about your new date than you might care to know upfront, Enough Said is a charming commentary about the new rules of love. Watching Gandolfini in this role, it’s clear he was an actor who had more to say—enough said.

Enough Said Is Not Just Another Date Night Movie

un-plussed 17 mins ago
Are They Really Just Gonna Call It ‘Max’? HBO Max and Discovery+’s new combined streaming service is getting closer to picking a name.
sad girls rise 3:41 p.m.
SZA Puts Fans on Alert, Announces New Album S.O.S And a Phoebe Bridgers feature is spotted in the full track list.
overnights 3:14 p.m.
George & Tammy Series-Premiere Recap: Playin’ Possum H-E-double-L breaks loose in Nashville when Tammy Wynette meets George Jones.
my single is dropping 2:25 p.m.
All Caroline Polachek Wants for Valentine’s Day Is Desire Welcome to her island.
toasts and roasts 2:15 p.m.
At the Kennedy Center Honors, George Clooney and U2 Get Their Flowers Gladys Knight, Amy Grant, and Tania León were also celebrated during one of Washington’s most star-studded events of the year.
gma3 goss: what you need to know 1:27 p.m.
T.J. Holmes and Amy Robach’s GMA3 Flirtfest Is Going on Hiatus Holmes and Robach simply “have the day off.”
trailer mix 1:18 p.m.
You People Are Coming to Dinner Kenya Barris and Jonah Hill’s take on the rom-com hits Netflix on January 27.
emergency discussion 1:15 p.m.
How Is His Dark Materials Going to Pull This Off? The series’ final season takes on the difficult task of translating many heady, absurd, and arguably heretical elements from The Amber Spyglass.
*beyoncé voice* texas 12:51 p.m.
Guns N’ Roses Is Suing a Texas Arms Dealer That Stole Its Name “As well as its gun sales, the store also sells a small amount of roses …”
vulture 10x10 12:00 p.m.
The Mennonite Puzzle 16-Across, Three Letters: Song title for Zayn, Harry Styles, or Kiss.
gorgeous gowns 11:32 a.m.
Julia Roberts Was Festooned in Cloon at the Kennedy Center Honors New meme format dropped!
best of 2022 11:00 a.m.
The Best Comedy Specials of 2022 The year’s best releases had some urgency behind their existence: capturing this thing at this moment.
By Kathryn VanArendonk
2022 kennedy center honors 9:50 a.m.
Borat Showed Up at the Kennedy Center Honors to Make the Bidens Uncomfortable Sacha Baron Cohen, in the guise of the journalist from Kazakhstan, paid tribute to honorees U2.
best of 2022 9:00 a.m.
The Best TV of 2022 Television’s future looks hazier than ever, but these shows make a clear case for optimism.
By Jen Chaney, Roxana Hadadi, and Kathryn VanArendonk
vulture picks 8:00 a.m.
25 Notable New Releases Over the Next Two Weeks Avatar: The Way of Water, a TV adaptation of Octavia E. Butler’s Kindred, and Guillermo del Toro’s Pinocchio.
By Vulture Editors
whodunnit? Yesterday at 10:05 p.m.
The White Lotus Kill Or Be Killed Report: You Can’t Go Home Again The vibes are deteriorating and we are but minutes away from some murder.
overnights Yesterday at 10:05 p.m.
The White Lotus Recap: Suspicious Minds A common fan theory is validated, and opens the door for even more speculation.
chat room Yesterday at 10:05 p.m.
Sabrina Impacciatore Thought She’d Never Book Another Role After The White Lotus “[Mike White] told me, ‘Sabrina, you have to be more bitchy!’ And I didn’t get it right away. I was scared people could hate me.”
overnights Yesterday at 9:48 p.m.
Yellowstone Recap: Survival of the Unfittest There’s no better way to say this: Summer just isn’t a good character. She wasn’t last year, but she’s especially not this year.
overnights Yesterday at 9:15 p.m.
The Real Housewives of Potomac Recap: Abuelitas a Miami The dynamic between Mia and Jacqueline is so bizarre, yet I can’t look away.
More Stories