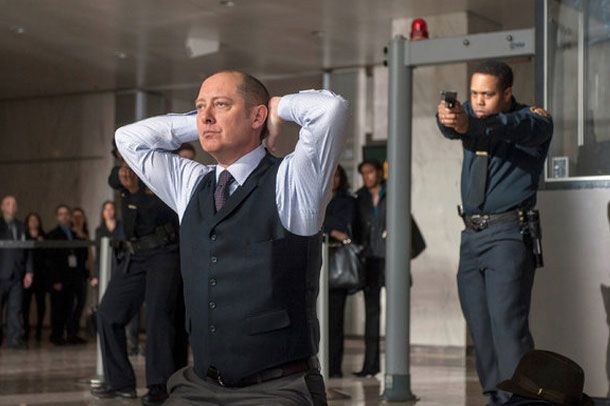 When Raymond “Red” Reddington tells newbie agent Elizabeth “Liz” Keen, “I’m gonna make you famous, Lizzie,” she has no idea what she’s getting into. NBC’s hotly anticipated new show The Blacklist, premiered last night at 10 p.m. Starring James Spader as Red, a.k.a. “the Concierge of Crime,” the season debuts with this ex-agent-gone-bad inexplicably turning himself in to the Feds and suggesting he’s ready to start sharing his classified black book of global criminals—if they’re willing to play by his rules. Rule number one? He’s only willing to speak with newbie agent Elizabeth “Liz” Keen, played by Megan Boone.

Red tells Liz, she’s going to need to learn to think like a criminal and “see the bigger picture.” Her first task is catching an elusive terrorist, Ranko Zamani, who was long presumed dead. Without revealing why he’s suddenly sharing his contacts list of crooked politicians, violent mobsters, spies, and terrorists, Red becomes a sphinx-like informant, blurring the lines between black hats and white hats. With its shaded plot and unexpected twists and turns, The Blacklist is firmly in the gray zone of justice.

close read 20 mins ago
House of the Dragon’s Brutal Birth Obsession Isn’t Realism. It’s Cruelty. In three separate instances, the Game of Thrones prequel reduces a birthing woman to the limits of her body.
on the record 2:09 p.m.
A Timeline of Black Panther: Wakanda Forever Taking Forever Kevin Feige explains why Marvel didn’t recast T’Challa, while Lego appears to spoil the identity of the next Black Panther.
midnights era 1:52 p.m.
Wait, Is Taylor Swift Just Giving Us Straight Answers? Midnights track seven is called “Question…?”
gamer time 1:20 p.m.
The Last of Us Teaser Arrives on The Last of Us Day Bella Ramsey and Pedro Pascal star, along with Storm Reid as Riley.
vulture 10x10 1:13 p.m.
The Defiant Puzzle 9-Down, Four Letters: Haircut for Joan Jett or Miley Cyrus.
unpressed 12:28 p.m.
Kiki Layne Isn’t Worried About Being ‘Cut’ From Don’t Worry Darling She got her man and her check.
fine lines 12:14 p.m.
Kelsea Ballerini’s Country Favorites Five classic lyrics that inspired the singer to cut loose on her new album.
the festival circuit 12:06 p.m.
A$AP Rocky Takes ‘Full Responsibility’ for Short Rolling Loud Set At least he brought out GloRilla.
housewives institute bulletin 12:00 p.m.
What in the Lisa Rinna M&M? The celebrities are sounding off about the ‘wives, and the RHOA ladies are pretty in peach at the reunion.
freaky friday 11:49 a.m.
Elizabeth Banks Could Do The Martian, But Could Matt Damon Do Cocaine Bear? “Matt Damon, love him. He’s having to figure out how to survive. I want that role.”
chat room 11:20 a.m.
House of the Dragon’s Matthew Needham Is Playing Larys As a Hero “He might seem completely mad, but it’s very methodical.”
one perfect scene 10:00 a.m.
A Hell of an Introduction How director Romain Gavras and his cast and crew created the year’s wildest movie opening.
By Bilge Ebiri
explainers 9:48 a.m.
‘No One Has Been Ruled Out’ of Facing Charges in Rust Shooting The state of New Mexico received funds to prosecute up to four defendants in the shooting.
book review 9:42 a.m.
When Grief Returns Again, and Again, and Again … In her time-looping novel The Furrows, Namwali Serpell’s deft use of repetition makes the plot feel dynamic even as she retells the same story.
vulture picks 8:00 a.m.
25 Notable New Releases Over the Next Two Weeks Bella Hadid joins Ramy, Hasan Minhaj’s latest Netflix special, Pavement reunites, and more.
overnights Yesterday at 10:10 p.m.
House of the Dragon Recap: A Bad Egg Like it was for the Starks in early Game of Thrones episodes, the stakes for child’s play are high for these little Targaryens.
overnights Yesterday at 10:00 p.m.
American Gigolo Recap: Even Faster, Johnny This week, American Gigolo gets a little sleeker (if not sexier).
fire and blood Yesterday at 10:00 p.m.
Who’s Who in Westeros: A House of the Dragon Character Guide Keeping up with the Targaryens after episode six.
overnights Yesterday at 9:00 p.m.
The Serpent Queen Recap: The Melon and the Eggplant Catherine and Diane are now united, which makes for great television.
obits Yesterday at 8:35 p.m.
Dale McRaven, Mork & Mindy and Perfect Strangers Creator, Dies The star-making producer was 83.
More Stories