Perhaps he’s now had a change of heart given Gravity’s recent success, but when New York Magazine spoke to director Alfonso Cuarón recently, we learned that his favorite movie among his own creations is A Little Princess. (Wrote the profile’s author, Dan P. Lee: “He never watches his movies after the fact, save one time, with a real theater audience, but if he were forced to pick a favorite, it would be A Little Princess.”) The quick mention of the 1995 film based on the children’s novel was a wonderful reminder (or perhaps, no shame, you never knew) of a story important to so many young girls, and that Cuarón’s adaptation didn’t disappoint. Here are five reasons why:

Ramayana and the Yellow Smoke
The story of Ramayana, which Sara relates to her classmates over the course of the film, quickly appears to resemble her own (e.g., the thick clouds of yellow smoke are a stand in for the mustard gas that blinds her father in the WWI bunker, she mimics the circle he draws around his bride in chalk when she’s sent up to the attic by Miss Minchin, etc.). Instead of choosing animation, Cuarón goes for hazy live action — with the perfect Easter egg attached: The actor who plays Captain Crewe also plays Ramayana.

The Black Balloon
Quite literally right after Sara’s birthday, Miss Minchin gets word that the girl has been left penniless, with nothing to fund her stay at the boarding school. Before the party is even cleared, Sara is informed that her father is dead (“You are alone in the world!”), and a single black balloon proceeds to pop. (Do not ask me why black balloons were involved with this birthday party!)

The Snowy Window
The movie’s climax, a snowy scene in which Sara throws open her attic window to smile across at her neighbor Ram Dass, whose monkey often escapes into Sara’s room and who will eventually organize a brunch-time feast for the servant girls after hearing them hungrily imagining one before them. The soundtrack sings: “Take my heart / Kindle it with your heart / And my heart cannot be / Kindled without you / Your heart will kindle my heart.”

Sara and Captain Crewe’s Reunion
Has a film scene ever caused you to scream at the screen while simultaneously sobbing? As fate dictates, Sara finds herself hiding in the same room as her father — whose memory is hazy from the war, and doesn’t recognize her at first. Don’t worry, he quickly remembers. Sad tears become happy tears.

And, Yes, That’s Bee Girl
You might not remember any particularly famous folks among the young schoolgirls, but look a bit closer: That’s Bee Girl! Heather DeLoach, a.k.a. Bee Girl, had starred in Blind Melon’s “No Rain” just a few years earlier. Surrounding her? Far right with blonde curls is Kaitlin Cullum (Libby Kelly from Grace Under Fire), then Vanessa Lee Chester (Janie Gibbs from Harriet the Spy), and Camilla Belle (Practical Magic, The Ballad of Jack and Rose, perfume ads). The Little Princess herself was played by Liesel Matthews (neé Pritzker), who inherited the entirety of the Hyatt Hotels fortune. 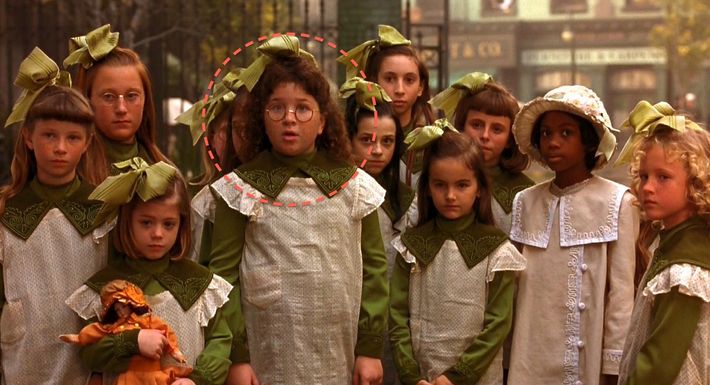