Sometimes, what stands out more than what you say is how you say it. It’s an oft-heard lesson that might make sense when applied to Kanye West, who appeared on Jimmy Kimmel Live to “make amends” with the late-night host after a spoof the show aired offended West. And just like on the spoofed BBC interview, last night Kanye had a lot of very interesting, very true things to say. Perhaps they were slightly buried by the “I’m a genius” affirmations? Just in case you missed what Kanye really had to say, we’ve collected the interview’s most interesting moments. (Turns out, it wasn’t all fun and games. And it wasn’t a prank.)

• Jimmy: “I’ll be honest with you, I only saw a couple little parts of the interview when we did this sketch … “
Kanye: “Yeah, that’s what I thought.”

• ” … I’ve never done a publicity stunt in my life … I don’t follow rules of normal celebrity or what their publicity tells them to say. I don’t do publicity stunts, ever. So don’t ever think that.” 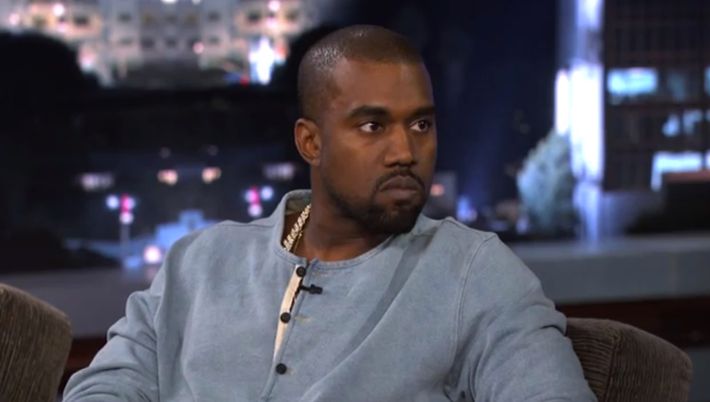 • “Because for me, I’m a creative genius and there’s no other way to word it. I know you’re not supposed to say that about yourself, and I say things the wrong way a lot of times, but my intention is always positive … I want to help the world. I want to make peoples’ lives easier.”

• “People told me I couldn’t rap … And I wouldn’t even say I’m a rapper, I’d say I’m more of a messenger than a rapper. So even when you say ‘rap beef,’ it undermines it, and keeps re-contexting what I said.”

• Jimmy: “Where were you when you were writing those tweets? I like to imagine on the toilet.”
Kanye: “Yeah, that’s when I come up with my best shit.”

• “If I make my own T-shirt and I call it ‘Kanye,’ everyone is gonna think about when I called myself a genius and say, ‘What’s genius about this?’ But when people line up for the Yeezys, they’re like, ‘Oh wow, this is really genius.’ You need that production…But currently in fashion, there’s no black guy at the end of the runway.”

• “It’s not about racism anymore, it’s classism. Paula Deen, she was old-school … ‘You’re a rapper and your girl is on a reality show, so you’re not up here with us. We’re old money.’ It’s snobbery and I’m not into all that snobbery, like seriously. Because we have the loudest voice, we have the loudest communication. All we want to do is make awesome stuff. All we want is a real shot.”

• “People don’t stand up and protect their dreams. People are too scared of getting spoofed.”

• ” … I stood up to drug dealers in Chicago and said, ‘You can’t have my publishing, come and kill me. Do whatever you’re gonna do, but you’re not gonna bully me. You’re not gonna stop me.’ Because my mother made me believe in myself!”

• “I refuse to follow those rules that society has set up in the way they control people with low self-esteem: with improper information, with branding, with marketing. It’s about truth, it’s about information, it’s about awesomeness. The only luxury is time. The time you spend with your family.”

• “When people hear my music, they have a good time. And I should be respected as such when I walk down the street … Don’t try to antagonize me. Because you know what, it’s not safe for you in this zoo. Never think that I’m not from Chicago for one second.”

• “And people say, ‘Well, you signed up to be a celebrity,’ and I understand you gotta get your money, it’s hard out here. But let’s have respect for each other. You do help me get money, paparazzi. You help me show people how fresh my outfit is. That helps me influence people.”

Kanye West Made Up With Jimmy Kimmel, Tried to Top His Twitter Rant