Adapting a popular Saturday Night Live sketch into a movie is a difficult task, but Mike Myers is one of the few people who’s done it successfully. The first Wayne’s World was such a major hit that it made adapting “It’s Pat” and “Daily Affirmations with Stuart Smalley” seem like good ideas. After Wayne’s World became a massive win for Myers, he began adapting his second and third most popular characters into films. His “Coffee Talk” movie deal quickly collapsed, but in 1998, coming off of the first Austin Powers, Mike Myers started writing a new SNL-based movie.

The resulting project, based on SNL’s black turtleneck-wearing host of the West German talk show Sprockets, was called Dieter and it wound up with Mike Myers being slapped with two hefty lawsuits and production being called off before it even began. I recently came across a copy of the script to Dieter, and it turns out it’s one of the funniest scripts Myers has ever written and if it were made, it might have wound up being the next Austin Powers or Wayne’s World.

Co-written by Mike Myers, Michael McCullers (who scripted both Austin Powers sequels with Myers), and SNL hall-of-famer Jack Handey, Dieter (originally titled Sprockets) is a dense screenplay packed with solid jokes. The storyline follows Dieter’s talk show plummeting in the ratings after his pet monkey Klaus, who’s his wildly-popular sidekick, is kidnapped and held for ransom. Dieter, who can’t make the ransom because he “spent all his money on arts and lotions,” then travels to LA to get his monkey back. It’s a silly plot for the film, but a Dieter movie is going to be silly anyway. It manages to be entertaining nonetheless. Like other Mike Myers movies, the script jumps around a little bit and feels like a series of sketches at times, but that’s not a bad thing as most of the sidetracked gags are funny.

One of the script’s strengths is its supporting characters. While in LA, Dieter stays with his stereotypical American cousin Bob Sheeder and his stereotypical American family. Myers had cast Will Ferrell, still on SNL at the time and years from becoming a household name, as Sheeder, a role that clearly was written for Ferrell (the script, penned before Ferrell was signed on, reads “Think Will Ferrell” for the character description). Detailed as “a red-faced man of about 45,” Bob Sheeder is pretty much just a fleshed-out version of Ferrell’s “Get Off the Shed!” character from his early SNL days. He even makes an entrance while yelling at his kids in a “Get Off the Shed!” manner:

As prescient as it was for Myers to hire Will Ferrell for a meaty supporting role three years ahead of him becoming a big movie star, he had another future comedy heavyweight in the supporting cast: Jack Black. Coming off of his breakthrough role in High Fidelity when he was cast in 2000, Black was to play Daryl Hanes, a monkey tracker/notary public who comes to Dieter’s aid and is described as “a crazy looking Slim Pickens kind of guy.” Landing both Ferrell and Black was a major coup for Myers, as the duo would become two of the biggest names in comedy a few years later and they were playing the two biggest parts in Dieter beside Myers. Other supporting characters included one-dimensional Mike Myers movie sexy lady love interest Gena (it’s not known who was to play her) and David Hasselhoff, who had signed on for a self-parodying extended cameo that was a little ahead of its time and not as unfunny and hackneyed as seeing David Hasselhoff play himself in a movie now would be.

On paper, Dieter had a lot going for it: a funny script, burgeoning stars Will Ferrell and Jack Black in prominent roles, and red-hot Mike Myers coming off of the second Austin Powers, his highest-grossing movie yet, when production was about to begin in summer 2000. One big thing the movie had going against it, though, is that Dieter is a much less relatable and less charming protagonist than Austin Powers or Wayne Campbell were. In fact, he’s pretty cold and off-putting. Throughout the movie, he’s a Nietsche-quoting, artsy nihlist who doesn’t really have any affection for anyone except his monkey. Dieter is perhaps at his most sadistic in a scene midway through the script where he sends an FBI team to retrieve his monkey, lying that it’s his human son who’s been kidnapped. A bunch of the FBI men are killed, but Dieter doesn’t really bat an eye: 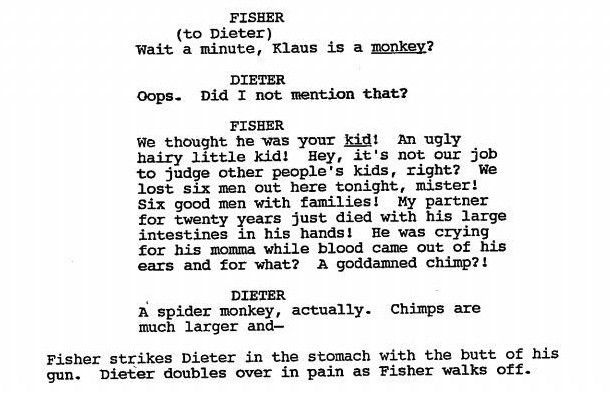 It’s bold of Myers and his co-writers to have been so unconcerned with making Dieter likable and to have even gone the other direction on that front years ahead of callous, selfish comedy heroes like Kenny Powers, Larry David, and the It’s Always Sunny gang. Dieter is like Sacha Baron Cohen’s Borat but without the endearing cluelessness. The script’s whole fish-out-of-water European-guy-in-America plot evokes further comparisons to Borat.

In addition to Dieter being a heartless nihlist, another thing about the film that might have been tough for mainstream audiences to swallow is all the references German art house cinema that color the script similarly to how James Bond references are used in Austin Powers but not as blatantly. There are subtle nods to the movies of Fritz Lang and Werner Herzog that would probably be lost on the average US movie theater patron, as would the planned cameo from filmmaker Wim Wenders.

Perhaps the greatest loss to result from Dieter being called off is what could have been the start of an amazing movie writing career for co-author Jack Handey. Handey, who was dubbed “the envy of every comedy writer in America” by The New York Times, spent over a decade on SNL, creating classic segments like “Unfrozen Caveman Lawyer” and “Deep Thoughts,” but never successfully made the jump to features (the only other record of Handey writing a movie I could find was his long-in-the-works screenplay Harv the Barbarian, which Rob Schneider was briefly attached to). While Jack Handey is still penning top-notch comedy, Dieter’s failure robbed us of him becoming a big Hollywood movie writer.

So, what happened to Dieter? With the movie set up to be Mike Myers’s next big post-Austin Powers comedy franchise, Dieter seemed like a slam dunk (albeit with some iffy elements). The movie was all set up to film in the summer of 2000 with first-time director Bo Welch, producers Ron Howard and Brian Grazer, and actors Will Ferrell, Jack Black, and David Hasselhoff signed on and millions spent on preproduction costs. Myers, unhappy with the script (which he co-wrote), backed out of the project and relinquished his $20 million salary, causing Howard and Grazer’s company Imagine and the studio, Universal, to slap him with a pair of multimillion dollar lawsuits. Myers filed a countersuit and said the studio was trying to rush him into filming a “fundamentally flawed” script and that he didn’t want to “cheat moviegoers who pay their hard-earned money to see my work.” Steven Spielberg, who wasn’t involved in the project, even stepped in to try to get everyone to reach an agreement without lawyers but to no avail.

Dieter coproducer Emma Chasin told EW that the problem with the script was that “Dieter was too passive. He didn’t make choices. He resided only in the intellect, not in the heart. It would have been like Austin Powers just saying, ‘Smashing, baby, smashing.’ Funny lines alone don’t make a movie work.” Two years later, Myers signed on to star in The Cat in the Hat for Univeral and Imagine, which seems like it might have been part of an agreement with the companies to get him out of the Dieter lawsuits. Nevertheless, this is something that Brian Grazer has publicly denied.

Despite Mike Myers’s reservations, the Dieter script is full of funny jokes and set pieces. I’m not sure which of the 14 drafts of the script I have (yes, Myers and his co-writers completed 14 drafts), but it definitely shows a lot of promise and would have been considered even sharper and funnier at the time it was written back in 2000. Although it may lack a little of the mainstream appeal of Myers’s earlier films, Dieter is definitely closer to Austin Powers than it is to The Love Guru.

+Comments Leave a Comment
‘Dieter’: The Funny Mike Myers Movie That Never Was

overnights 18 mins ago
Saturday Night Live Recap: Michael B. Vulnerable Michael B. Jordan lets his guard down in an especially goofy episode.
michael b. monologuin' 12:19 p.m.
Michael B. Jordan Reminds Us He’s Single in His SNL Monologue He’s ready to rebound on Raya.
chat room 9:00 a.m.
Poker Face’s John Darnielle Wants to Hear the Rest of ‘Merch Girl’ Too “I’m about the 11th cleverest writer of my generation, but ‘Merch girl had nothing up her sleeve’ I was extremely happy with.”
rip Yesterday at 8:00 p.m.
Tom Verlaine, Influential Punk Guitarist, Dead at 73 The front man of the band Television worked closely with Patti Smith.
the vulture spot Yesterday at 7:00 p.m.
When Steph Curry Met Peter Nicks He Fumbled a Quesadilla  It’s hard holding a quesadilla while wearing four championship rings.
the vulture spot Yesterday at 5:23 p.m.
A Thousand and One’s AV Rockwell Felt Erased in New York  “Part of what made me feel the urgency to tell this story was I felt New York lied to us,” says the Sundance Grand Jury Prize-winning director.
fear factor Yesterday at 3:28 p.m.
Natasha Lyonne’s Accent Gets ‘More New York’ When She’s Scared “When I get nervous, I get more New York to, like, protect myself from strangers.”
in her (flea)bag Yesterday at 1:02 a.m.
Phoebe Waller-Bridge Has Found Her Next Archaeology Project The Indiana Jones 5 star will reportedly write a Tomb Raider TV show for Amazon.
sundance 2023 Jan. 27, 2023
A Complete List of Films Sold at Sundance 2023 (and Their Price Tags) Greenwich Entertainment picked up Nam June Paik: Moon Is The Oldest TV.
gma3 goss: what you need to know Jan. 27, 2023
Every Detail of T.J. Holmes and Amy Robach’s GMA3 Drama in Chronological Order The pair have now parted ways with ABC News.
gma3 goss: what you need to know Jan. 27, 2023
ABC News Is Breaking Up With T.J. Holmes and Amy Robach But the couple is reportedly eyeing lawsuits against the network.
the vulture spot Jan. 27, 2023
Fremont Is a Response to a ‘Fallacy’ About Women in Afghanistan  According to director Babak Jalali.
overnights Jan. 27, 2023
RuPaul’s Drag Race Recap: Unconventional-Material Girls A much-needed filler episode sets the stakes for the rest of the season.
the vulture spot Jan. 27, 2023
Ira Sachs Wanted to Make Passages for … Love  “What they do in front of the camera is quite aesthetically and erotically and emotionally engaging,” the director said.
oscars 2023 Jan. 27, 2023
The Academy Subtweets Andrea Riseborough’s Friends in Statement “We are committed to ensuring an inclusive awards process.”
chat room Jan. 27, 2023
Debra Jo Rupp Would’ve Liked to Do ‘a Little More’ on That ’70s Show “We had a lot of male writers. I understood that.”
coming soon Jan. 27, 2023
Nicole Kidman and Maya Erskine Find The Perfect Nanny They’re producing and starring in an HBO limited-series adaptation of the French novel together.
movie review Jan. 27, 2023
Filmmaking at the Speed of Life in One Fine Morning In Mia Hansen-Løve’s latest, emotions emerge organically from the unfussy drama onscreen.
By Bilge Ebiri
party report Jan. 27, 2023
Harrison Ford Doesn’t Remember the Lyrics to Sugar Ray’s ‘Every Morning’ Despite singing it with Jessica Williams in Shrinking.
follow friday Jan. 27, 2023
Bill Schaefer Knows the Difference Between Delis and Bodegas We chatted with the comedian on Instagram Live.
More Stories