Frick and Frack: The episode kicks off with us meeting these two delightful additions to the The Good Wife universe. Who knew the NSA could be so adorable? They wear terrible Big Bang Theory shirts! They watch goat videos! They care deeply about what Alicia will be wearing to the inaugural! So, in short: NSA techs, they’re just like us. Following the Danny Marwat case of two years ago, these two spindly gents were tasked with listening in on Diane Lockhart and Alicia Florrick. When they find out that Lockhart/Gardner is suing the NSA and then their boss finds out Alicia is the wife of the governor-elect, Frick and Frack are required to find a more recent terrorist connection in order to keep their surveillance viable. Thank heavens, Zach Florrick has a convenient Somali ex-girlfriend who leaves conveniently vague messages on his landline. I hope this NSA investigation winds up being a season-long arc and we get a whole lot more from Frick and Frack. (Particularly Zach Woods, who was so boring on The Office and so tremendous here and on Veep). I’m not sure I fancied the evocatively ethnic ululation soundtrack that accompanied most of their scenes, but I did enjoy the recorded-phone-conversation shots. It was like an episode of The Wire. Only, you know, wacky. 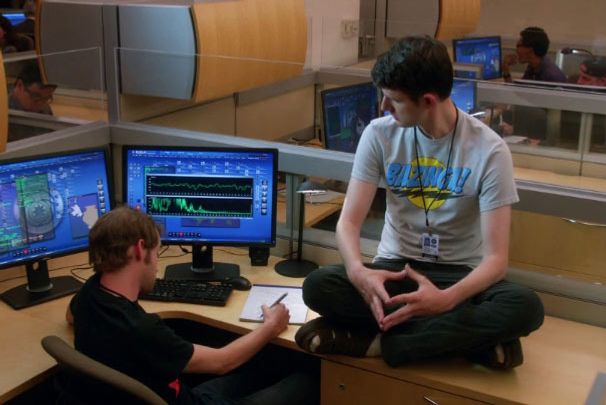 Ah, So Here’s Our Big Bad: Speaking of The Wire … Alicia, did you learn nothing from Stringer Bell? Let alone Walter White? Be more discreet with your burner cell phones! Zach Grenier, who plays the exquisitely smarmy David Lee, has been bumped up to series regular this year, which means he’ll be around a lot more to make puppy eyes at Alicia’s mother and sniff out the truth about Florrick, Agos & Associates. He noticed Alicia’s second cell phone and Veronica’s large investment. It’s only a matter of time. Speaking of which? These two. I ship them. So hard. Forget Will and Alicia or Cary and Kalinda. Also, Stockard Channing definitely got the best line delivery of the night with “I’m just a real girl about money.” 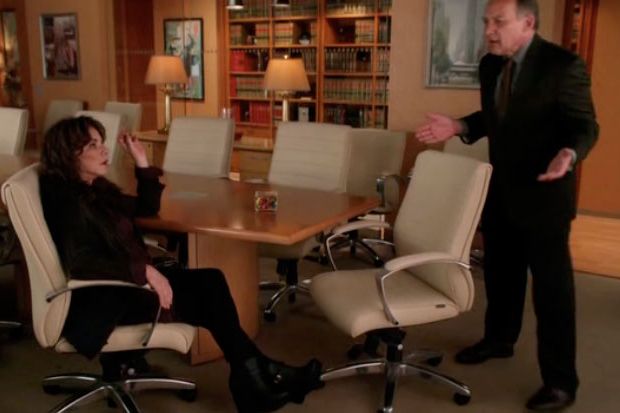 But He’s Our Rude Backroom Huckster: As we learned last week, Eli’s been promoted from campaign manager to Peter’s chief of staff because he’s the right man for the job and not at all because it’s a convenient way for him to keep his oar in the plot during a nonelection year. I could watch Alan Cumming spar with anyone. Anything. With a stapler. But it’s a real joy when he’s given a proper adversary. We’ll get to Dreama Walker’s Becca a little later on, but I loved the way he switched from smarmily laying on the charm with Chief Justice Ryvlan (The Walking Dead’s Jeffrey Demunn) to accusing him of sexism. Nobody likes a Latin-quoter, Ryvlan. 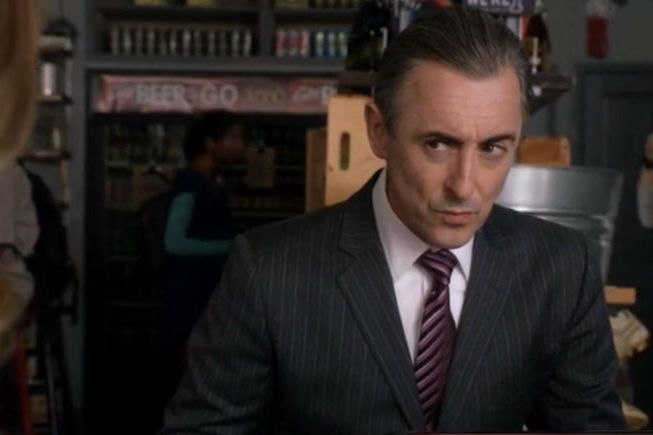 So I Guess We’re Sticking With the “Grace Florrick, Hot Politician’s Daughter” Plotline: Did anyone get a good look at the little pink number Veronica bought for Grace? That was Donna Martin–level bad. Given that, according to Veronica, she was using Alicia’s “young man’s rape fantasy” teenage wardrobe as the high-water mark, we can’t have high hopes for what’s in the rest of those bags.

Don’t Trust the B: And I suppose the reason we’re still following Grace and her newfound “hotness” is because it allows Dreama Walker’s Becca entrance into the Florrick household. I cannot argue with the logic. The more Dreama, the better. I like her playing the little villainess here so much more than when she was stuck in the daffy “good girl” role on Don’t Trust the B—- in Apartment 23. She’s an improbable and entertaining foil for Eli, and while she won’t be the Big Bad, she makes for a delightful mini-Bad.

You Wouldn’t Like Her When She’s Angry: Citing concerns that Cary isn’t up for the job, Alicia is put on the Chumhum case and tasked with defending Neil Gross against the NSA. It was fine and all watching Alicia and Will work together last week, but I really love it when she takes the lead. Especially when she and her shiny hair get all pissed. Ably backed up by Cary and Carey, Alicia gave us a decent preview of what Florrick, Agos & Associates could look like. It was great to see Neil Gross from “Chumhum” and Patric Edelstein from “Sleuthway” taking shots at each other, and the constant references to Edward Snowden made the Case of the Week feel topical but not quite as preachy. 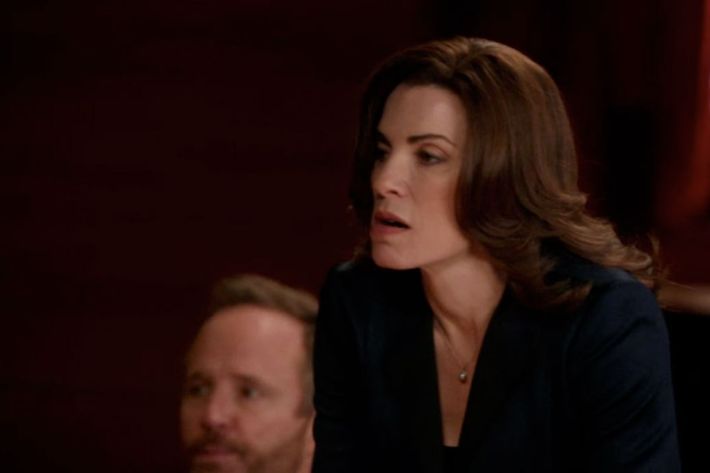 The Old Familiar Faces: There really were so many damn returning characters this week. No one does world-building quite so well as this show. Between the technology titans (conveniently in town for Chicago Tech Week!), Mandy Post, Veronica, Becca, Nisa (seriously, I did not think we’d see her again), etc., it shouldn’t be a surprise to see Judge Jeffrey Tambor again. But it was. It’s rare we get the same judge two weeks in a row. I wonder if this was a scheduling thing. Or just a coincidental jurisdiction thing. It’s not that he’s unwelcome, it’s just that I miss Judge Stephen Root and Judge Ana Gasteyer.

There Are Worse Things She Could Do: And for all the comedy and delight that Stockard Channing brings, it’s always good to watch Alicia and her mother hash out old family drama. It helps us understand Alicia’s character (and her fondness for wine and tequila). 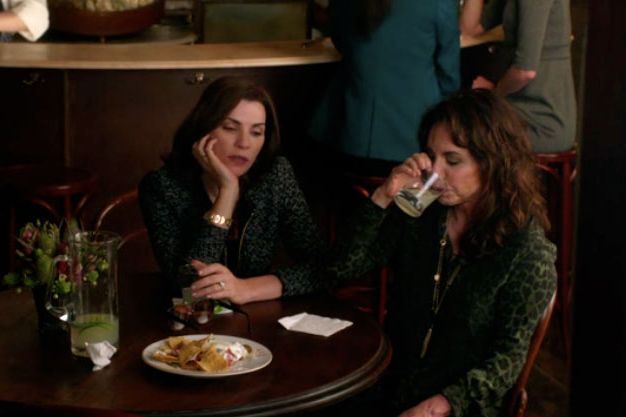 Kalinda: I’m really uncertain as to what role Archie Panjabi is going to play this season. Her fondness for Cary leaves her hands frustratingly tied during this schism. And you know we prefer our Kalinda handsy. Would it be possible to get Kalinda in the same room as Melissa George’s Marilyn? The eyeliner alone would be devastating. 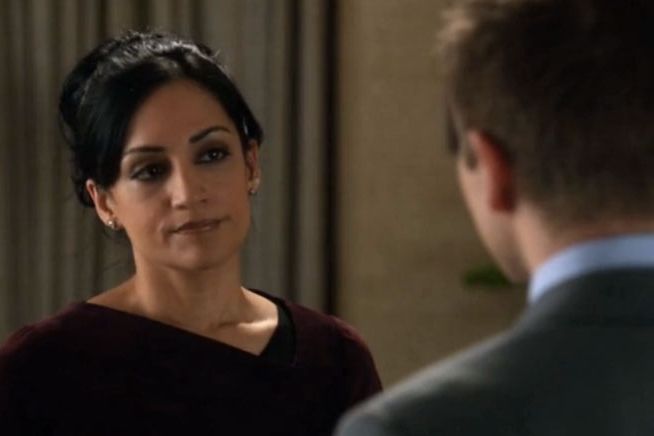 So Much for the Old Will And Diane: But as is usually the case with this show, the courtroom drama has nothing on the personal drama. After staunchly defending Will throughout the episode, it would appear Diane sold him out to Mandy Post and her unscrupulous side ponytail. We don’t know for certain yet, but it’s not looking good. I’m guessing this means no more late-night victory dance parties for the old Will and Diane. All hail Cary and Alicia. 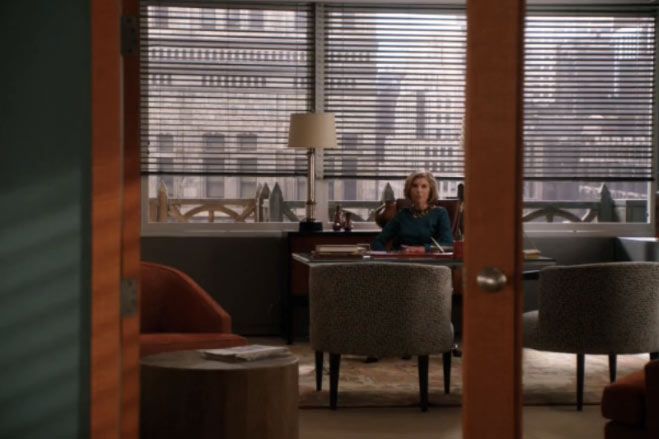 coming soon 19 mins ago
Scarlett Johansson Finds Just Cause to Lead a TV Show It won’t be her first time starring in a project based on the book by John Katzenbach.
thanks fam Yesterday at 10:50 p.m.
Michelle Williams Shouted Out Her Grams from Dawson’s Creek Paying tribute to Mary Beth Peil in her Gotham Awards acceptance speech.
overnights Yesterday at 10:30 p.m.
Southern Hospitality Series-Premiere Recap: What Hath Leva Bonaparte Wrought? Bravo gives Leva Bonaparte the Vanderpump Rules treatment and spins off her and her band of merry, sexy, TV-ready employees into a franchise.
awards szn Yesterday at 10:18 p.m.
Everything Everywhere All at Once Tops 2022 Gotham Awards The only double winner of the night.
overnights Yesterday at 9:15 p.m.
Below Deck Recap: The Lost Boys Alissa and Camille are on a collision course. At least these guests are fun and easygoing.
when the party's over Yesterday at 7:47 p.m.
Don’t Get Too Attached to Billie Eilish’s Annual Vanity Fair Interviews From now on, she says she’ll only release one “every few years.”
too much fun Yesterday at 4:53 p.m.
Is Aubrey Plaza’s Blonde Era Part of an Elaborate Prank? She might be in prank witness protection after filming The White Lotus.
money money money Yesterday at 4:08 p.m.
Glass Onion Solves the Mystery of Getting People Into Theaters The whodunit made an estimated $15 million from just 600 theaters.
vulture lists Yesterday at 3:30 p.m.
13 Holiday Horror Movies You Can Watch Right Now From classics like 1974’s Black Christmas to the 2018 zombie musical Anna and the Apocalypse.
doing something unholy Yesterday at 2:32 p.m.
Kim Petras Has ‘Nothing to Say or Be Ashamed of’ About Dr. Luke Collabs She was previously one of his loudest defenders.
knives? out. Yesterday at 1:48 p.m.
Glass Onion: A Knives Out Mystery Delivers Its Final Clue Must see: Janelle Monáe and Daniel Craig discussing the game Clue.
flop weekend Yesterday at 12:42 p.m.
Disney’s Strange World Eats Space Dirt at the Box Office Not even Jake Gyllenhaal’s press-junket memes could save it.
pick-a-little donate-a-lot Yesterday at 12:20 p.m.
Nicole Kidman Comes to This Place (The Music Man) for Magic (to Donate $100K) Only she could earn a standing ovation as an audience member.
vulture 10x10 Yesterday at 12:00 p.m.
The Geometric Puzzle 21-Down, Five Letters: Movie that gave us the term “chestburster.”
the law Yesterday at 12:00 p.m.
Everything We Know About the Megan Thee Stallion and Tory Lanez Shooting Lanez has been ordered under house arrest following an alleged altercation with August Alsina.
By Victoria Bekiempis and Zoe Haylock
piano's hot Yesterday at 11:29 a.m.
Damien Chazelle Is Spiritually Incapable of Making a Movie Sans Jazz Margot Robbie All About Eves Samara Weaving in the Babylon trailer.
overnights Yesterday at 11:18 a.m.
The Real Housewives of Potomac Recap: Take It to da House Somehow, Karen has become the personal steward of everyone’s behavior in this Mia-versus-Wendy situation.
disrespect the classics Yesterday at 10:59 a.m.
Bob Dylan Hopes to ‘Rectify’ Book-Signature Controversy ‘Immediately’ After Simon & Schuster offered refunds for $599 auto-signed editions of his new book.
snow jams Yesterday at 9:29 a.m.
The 50 Best Original Christmas Songs Since ‘All I Want for Christmas Is You’ Queen of Christmas, meet your disciples.
last night on late night Nov. 27, 2022
John Mellencamp Has No Interest in Doing a Super Bowl Halftime Show He said so on WWHL.
More Stories