Following in the footsteps of Amy Poehler and Jon Hamm, Kathryn Hahn is pairing off with Adam Scott in his next installment of The Greatest Event in Television History. Hahn will be part of an as yet-to-be-announced ensemble cast that Scott has assembled to meticulously produce a shot-for-shot remake of a not-so-classic TV sitcom’s opening credits. (This is the first comedy: Scott’s previous two homages have been for one-hour mystery series Simon and Simon and Hart to Hart.) Scott is keeping details of the next re-creation mostly under wraps (Vulture has already made an educated guess), but the actor tells me it was “by far the stupidest one we’ve done yet. Almost embarrassingly stupid. Hopefully in a funny way.” Below is a behind-the-scenes photo of Hahn and Scott on the set of the third Greatest (Hahn’s wig is another clue), premiering November 7 at midnight on Adult Swim. 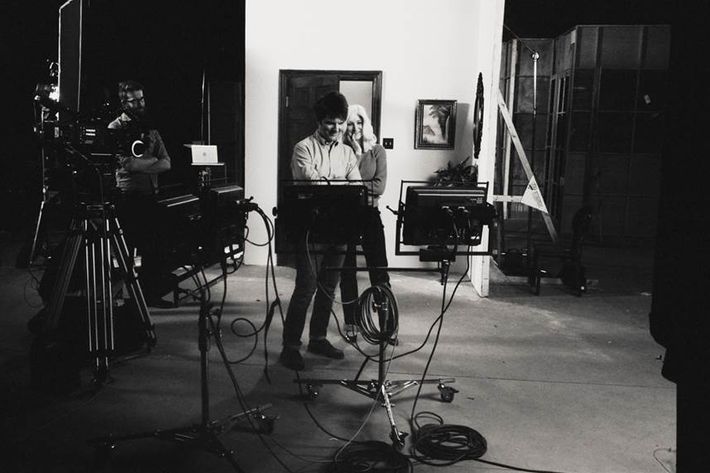 overnights 8:00 a.m.
Ozark Season-Premiere Recap: When a Stranger Calls As friends become enemies and a new big bad emerges, is this the Byrdes’ downfall?
superlatives 7:00 a.m.
Cat Power’s Best Covers and Biggest Changes, According to Chan Marshall Plus, “the only song” of hers that her son likes.
By Justin Curto
my tongue is dropping 12:21 a.m.
Tongue Twister: Megan Thee Stallion and Shenseea ‘Lick’ It Up for Music Video This is the first official single off Shenseea’s debut album ALPHA out March 11th.
shades of cool 12:04 a.m.
Lana Del Rey Joins Euphoria Universe With ‘Watercolor Eyes’ The song will officially premiere on Sunday night’s episode of Euphoria.
tv review Yesterday at 9:47 p.m.
Single Drunk Female Is a Jarringly Light Portrait of Alcoholism and Addiction The Freeform series’ zealous devotion to buoying the inherent darkness of its subject matter also means it fails to take any real risks.
overnights Yesterday at 8:26 p.m.
The Real Housewives of Miami Recap: Girls Trippin’ The women are finally all together and fighting, and we couldn’t be happier about it.
boats 'n bros Yesterday at 8:20 p.m.
Colin Jost and Pete Davidson Bought a Staten Island Ferry They’re boat boys now.
theater review Yesterday at 8:18 p.m.
Whisper House Is an Atmospheric Musical Without an Atmosphere Chill-less and thrill-less, despite a killer creative team.
adele's palace Yesterday at 7:00 p.m.
Adele Postpones Las Vegas Residency: “I’m Gutted” All “Weekends With Adele” dates will be rescheduled.
3 hours is too long Yesterday at 6:22 p.m.
The Batman Is One and a Half Twilight Movies Long Time for some movie run-time game theory.
buffering Yesterday at 5:35 p.m.
What If Netflix Raised Its Prices and Nobody Cared? The bigger problem right now: Wall Street is worried the service isn’t growing fast enough.
appreciations Yesterday at 3:47 p.m.
Bob Saget, Remembered by Those Who Knew Him “Luckily, I got to tell Bob I loved him a lot while he was still here. But I’d sure love to be able to tell him again.”
By Stuart Miller
buzz buzz hmmm Yesterday at 3:25 p.m.
Our Spooky, Sexy Yellowjackets Theories Time to render some post-finale verdicts.
bad dad Yesterday at 3:14 p.m.
Breaking Down Britney Spears’s Accusations Against Her Father From millions of dollars in legal fees to her dad’s defunct cooking series, Cookin’ Cruzin’ & Chaos With James Spears.
casting Yesterday at 3:12 p.m.
Congrats to The White Lotus Season-Two Cast on Its Alleged Italian Vacation EDIT: Its alleged *SICILIAN* Vacation.
cheer Yesterday at 2:59 p.m.
TVCC’s Coaches Talk Cheer, Sportsmanship, and ‘Eff the Judges’ Vontae Johnson and Khris Franklin explain what you didn’t see when it comes to the Navarro rivalry, scoring, and the unsmiling “Weenies.”
sundance 2022 Yesterday at 1:25 p.m.
18 Sundance Movies We Can’t Wait to Watch (from Home) From horror stories to news-breaking documentaries, here’s what’s we’re watching this year.
By
tv review Yesterday at 1:17 p.m.
On the High Seas or in Court, La Fortuna Excels in David-vs.-Goliath Mode If the Lincoln Lawyer author Michael Connelly were to secretly write fanfiction for the National Treasure universe, it might look like this.
my single is dropping Yesterday at 12:30 p.m.
Charlie Puth Finally Flips on New Song ‘Light Switch’ Watch his, uh, glow-up in the accompanying music video.
super bowl lvi Yesterday at 12:23 p.m.
What Is This Super Bowl Halftime-Show Trailer? Everything but a “‘G’ thang.”
More Stories