This episode reminded us of all the reasons we fell in love with Sons of Anarchy in the first place. After what seems like years of grim reaping, endless misery, and Jax Teller nostril flares, the boys of SAMCRO finally got to have some fun. Here’s what we learned from last night’s gleeful episode.

The Wreckage: I actually think the show spent more time mourning the set of the motorcycle club, than it has mourning any actual human death. The opening sequence was stunning, with images of Chibs and Jax picking through the bombed-out club accompanied by a simple fiddle score and the steady drip of busted plumbing. I’m glad Sutter, for once, didn’t go with an overwrought rock ballad for the soundtrack, letting the visuals and his actors do the heavy lifting. In a moment of self-awareness, Jax tells Chibs, “I did this.” With that admission (and Chibs’s support), all the frustration we’ve been feeling toward Jax started to melt away. No more of this “I’m doing this for the club” nonsense. 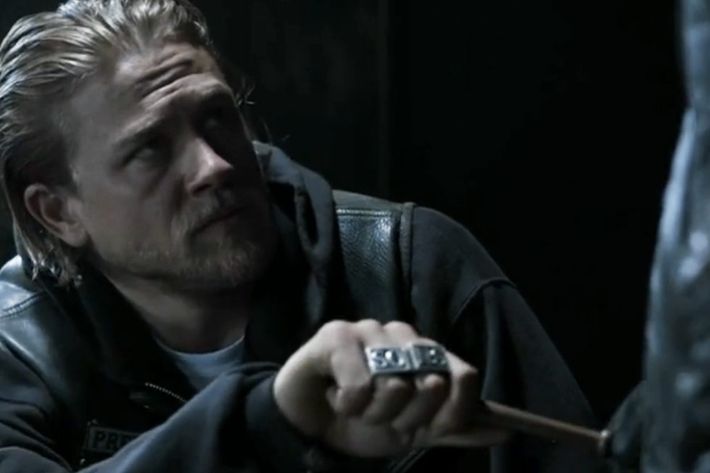 The Nero Effect: I’m not as optimistic about Nero’s bad feelings. This is the face of a man who is truly done. No matter how much Gemma raged, pleaded, or wheedled, he stayed checked out. How adorable was Gemma’s out-of-hand behavior in the police station? We can’t blame her if she has some lingering resentment for men in uniform after last week. But as much as I like these two together, as much as I think Nero could be good for Gemma, she is nothing but bad news for him. I won’t be surprised if Nero gets out of jail. Gemma and Roosevelt seem pretty united on that front. But I will be surprised if he makes it through the season alive. Those Tellers are toxic. 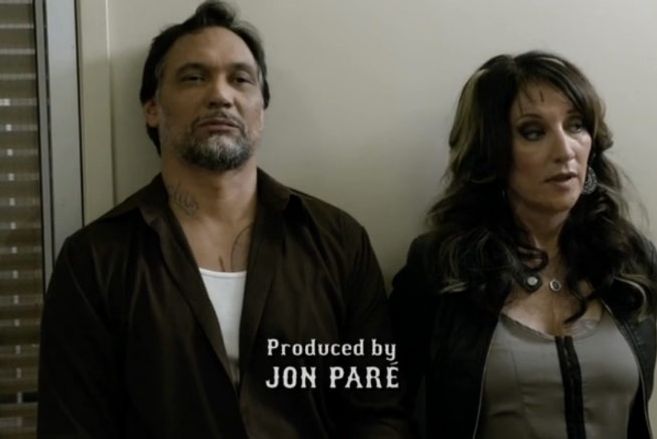 The Mad Kings: Speaking of characters whose days are numbered, I’m also not enthusiastic about Galen’s chances after that last phone call. I think it was pretty clear that the Kings felt that Galen misrepresented Jax and the nature of SAMCRO to them. Their surprise to hear that Connor is alive and well, and the daggers they shot at Galen when Jax said he didn’t want a war lead me to believe that there’s a possibility for Jax (with a Chibs or Clay assist) to win the Kings to his side and leave Galen out in the cold. Jax may be taking the safe, high road for now, but that bombing is not going to go unanswered. 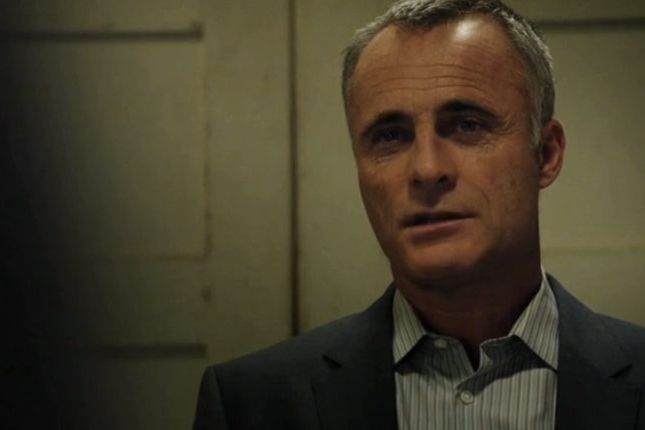 Wayne’s Worried: Tara is also playing a tricky game of allegiances and you can tell how unenthusiastic Wayne Unser is about her chances. He knows what a loose cannon Wendy is and how formidable Gemma is. Tara might have a team of allies, but it’s unclear where Unser stands. “You’re spinning a lot of plates there, sweetheart,” he said to Tara. We know he’s worried about the safety of the boys, but is he worried enough to cross Jax? To cross Gemma? Is he as sold as Tara is on the idea of Wendy as guardian? Unser, by the way, got the best line of the night after little Abel came crashing in to him. “Careful,” he said, “I’ve got a Nazi Owie.” 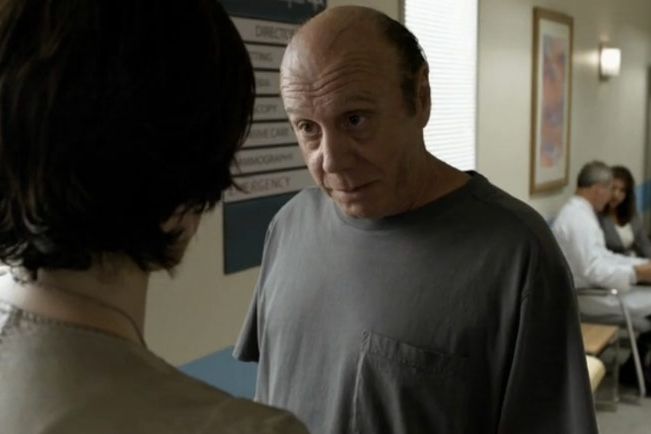 A Reluctant Ally: Did you see the alarm on Gemma’s face when Jax suggested she pass along a message to Clay? “Another conjugal?!” Oh, poor Gemma. No, she got to carry on this meeting fully clothed and she even leveraged last week’s incident against Clay in order to get some help on Nero’s case. Clay agrees to work with Galen on the gun deal in order to stay close to the Kings and confirms Gemma’s suspicion that Lee Toric was completely mental and out for vengeance. Then we get a very odd tribute to Otto who, Clay says, shived the Marshal in order to save both himself and Clay. A hero, that Otto. 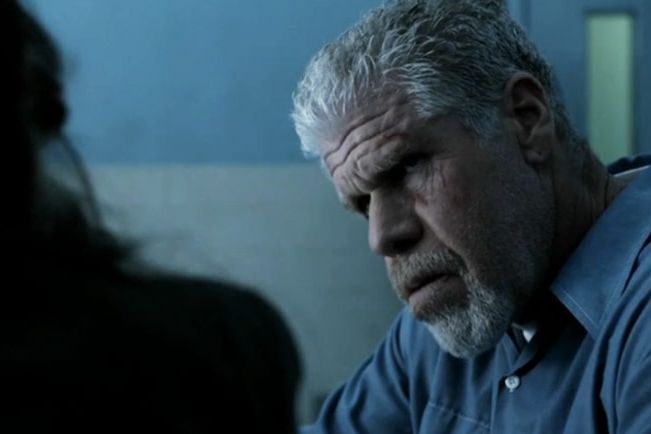 The Full Table: This right here, this meeting of the Northwest members of the Sons of Anarchy, this is the turning point of the season, of the show, and of Jax Teller. The president of SAMCRO lays it all on the table with honesty and strength. He respectfully invokes his father, but distances himself from John Teller’s indecision. He brings up Opie, but also pays homage to the other losses the club has suffered. This is the first time it feels like Jax actually has the best interest of the club in mind and is not just licking his personal wounds. Actually, this is the first time I’ve seen Jax be truly presidential. He rallies the troops to his side with this: “Two things you can do. You can run from the pain. Bail. Or you can allow it to burn into your heart. To leave its mark. A constant reminder of the love that brought us all here.” The boys seem to agree and though they had some fun on the road earlier as they drove through Eden, this is where the weight truly drops off their shoulders. 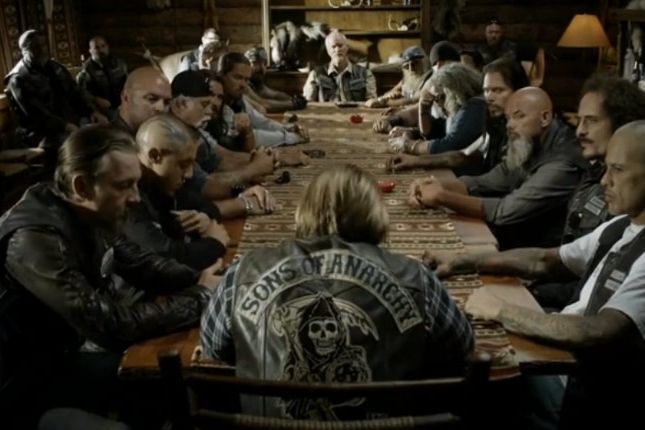 Burying Toric: Earlier in the episode, D.A. Patterson sneered at Roosevelt, “I think I’ll stick to the hard, concrete evidence.” Oh, lady, we got your hard, concrete evidence right here. By the bag, needle, and vial-ful. Was anyone else worried that Roosevelt might find an, er, full-body impression of Lee Toric on that mirror? Toric was awfully fond of his late-night, bare-ass, mirror hump fests. Well, all that Roosevelt managed to find was an arsenal, enough drugs to knock out seven Torics, and, oh yes, bullet holes in the ground. Patterson isn’t convinced yet, but she’s running out of options. 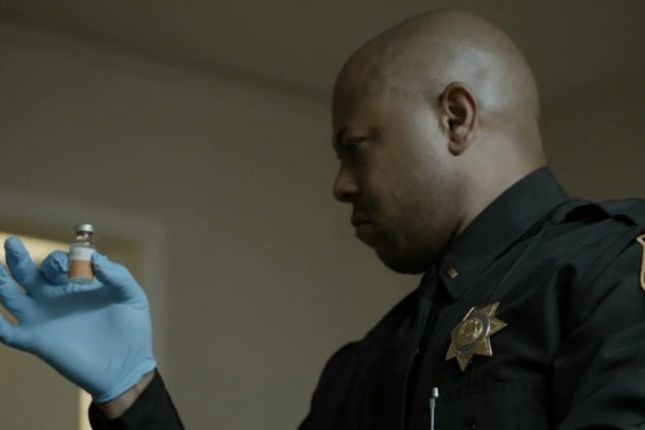 The Boundaries of Betrayal: Seeing that her case against Nero is crumbling, D.A. Patterson tried to put the screws to Tara. This is where Tara’s plan comes into sharper focus. She’s not out to hurt Jax. Her first priority is making sure her boys are safe. She might wound Jax by divorcing him and giving the boys over to Wendy, but she’s doing that in order to spare him the greater pain of incarceration. So her priorities go (1) protecting the boys (2) protecting Jax (3) screwing Gemma (4) protecting herself. When Lowen urges Tara to take the deal, Tara says, “The betrayal of love has boundaries, ones that I have to live with, I don’t need to think about an offer.” I wonder if Jax will be able to see the nobility in her actions. 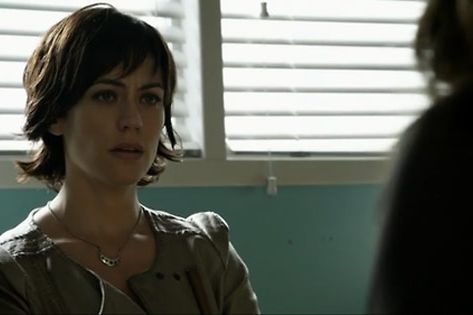 The Return of the Queen: When Walton Goggins showed up last year as Venus Van Dam, all you fans of Justified, The Shield, and unparalleled dental care stood up and took notice. And she’s back! This caught me completely by surprise. Even when Lyla got squirrelly about the gender of the person waiting in Nero’s room, I still didn’t catch on. But what a treat. And Goggins did something entirely different here than we saw last time. Whereas before Venus Van Dam was all camp and sexy dominatrix high jinks, this time she was practically a Tennessee Williams character. But I am of the mind that Goggins can do anything and I cannot wait for Trager’s reaction when he sees that Venus has returned. 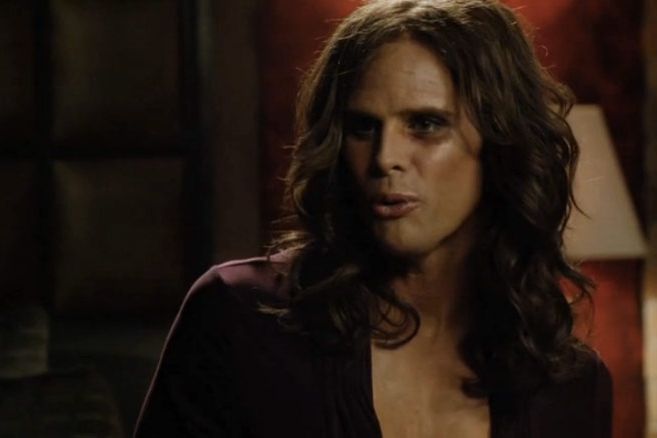 Time to Go Hood, Sister: It’s almost as if Venus opened the floodgates and the crazy fun aspects of this episode spilled out everywhere. That’s how we wound up here, in the hospital bathroom, with D.A. Patterson whipping off her wig and having an encouraging mirror chat with herself. Thank God that wig is gone; it was truly hideous. Now that the gloves are off, I’m excited to see what CCH Pounder can do. 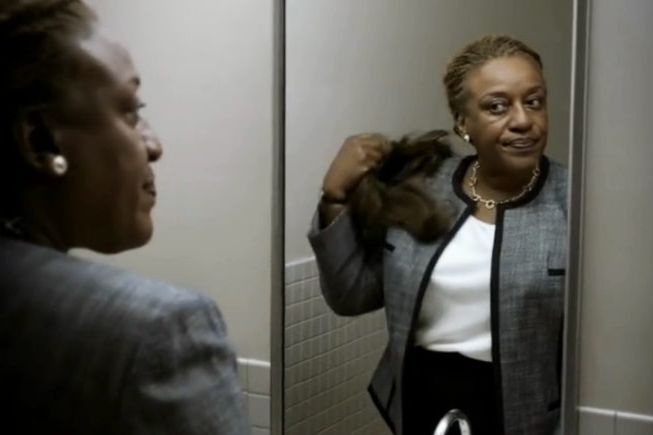 Exit to Eden: But the most fun was, of course, reserved for our boys who got to mix it up with some dirty cops from Eden, California. First of all, Bobby’s back. Secondly, I think we have to call Rat Boy MVP of that freeway chase scene. Should we be a little concerned about Juice? Probably. But for now he has Liberace’s bike, so maybe that will buy us some time before the inevitable Juice-splosion. So while it’s been “fun” to watch school shootings and hooker deaths and be-handings and mass-shivings and prison rapings, we needed this. We needed this look on Tig’s face. 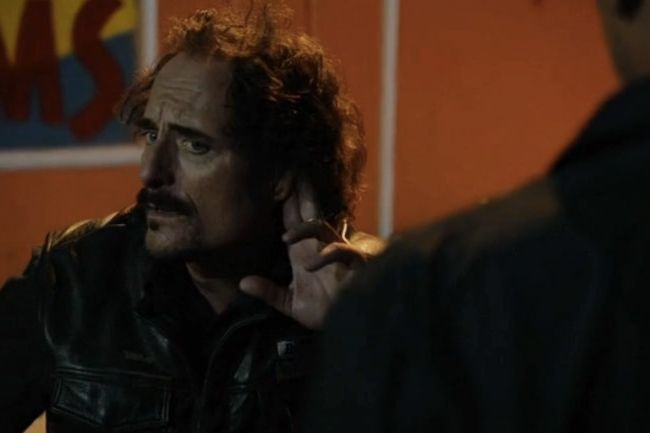 But more than that, we needed to see Jax smile. I honestly can’t remember the last time Charlie Hunnam looked like he was having fun. This was season-one fun. These are the outlaws we want to root for. It won’t last. The stuff with Tara hasn’t hit our hero yet. But for now? Ain’t we having fun. 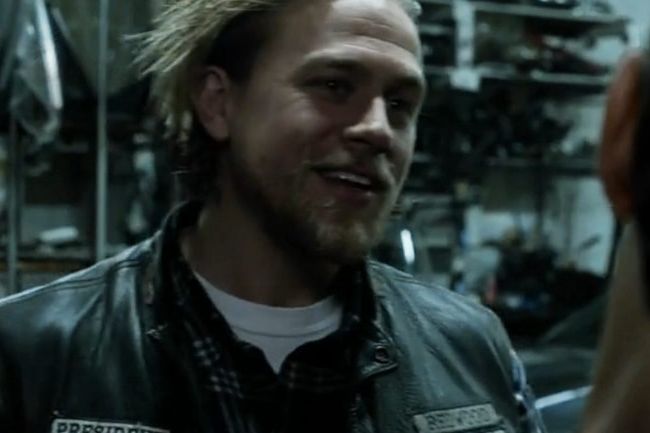 +Comments Leave a Comment
Sons of Anarchy Recap: Are We Having Fun Yet?

guides 16 mins ago
Navigating On Cinema’s Giant, Underground Universe A guide to Tim Heidecker and Gregg Turkington’s series and everything that it has spawned so far.
By Chris Kopcow
buffering 9:00 a.m.
The Great Netflix Panic of ‘22 It’s been a rough week for Netflix stockholders. But how bad are things really?
the grub street diet 6:00 a.m.
Actor Aaron Tveit Misses Chicken Parms “I always liked ’em a little burnt.”
By Chris Crowley
overnights Yesterday at 11:06 p.m.
The Real Housewives of Miami Recap: In a Pickle Marysol doesn’t choose violence. She chooses chaos.
obit Yesterday at 11:00 p.m.
Drakeo the Ruler, Influential West Coast Rapper, Dead at 28 The family intends to file a lawsuit against concert promoters next week.
the law Yesterday at 9:44 p.m.
Netflix Faces Lawsuit From Chess Champion Over Queen’s Gambit Rookie mistake.
what is ... wtf? Yesterday at 7:00 p.m.
Bitch Better Have Amy Schneider’s Money Update: She finally received her $1.3 million Jeopardy! winnings.
trailer mix Yesterday at 6:03 p.m.
Joseph Gordon-Levitt Gets a One-Star Rating for Yelling in Super Pumped Trailer  Travis Kalanick’s tumultuous rule is immortalized in a new Showtime anthology.
i couldn't help but wonder Yesterday at 5:30 p.m.
How Are the New And Just Like That … Characters Still Just Meeting Each Other? Why did it take so long to get Seema, Nya, and Lisa on the same set?
buffering Yesterday at 5:00 p.m.
Peacock Now Has 17 Million Subscribers But it’s also losing a lot of money for Comcast.
good one podcast Yesterday at 4:50 p.m.
The Birth of UnCabaret Was Just What Comedy Needed  Beth Lapides, the creator of the long-running live L.A. show, joins this week’s Good One.
role call Yesterday at 2:02 p.m.
Matthew Lillard and Skeet Ulrich Answer All Our Questions About Scream “Looking back on this has been like looking back on the first love of your life.”
By Jordan Crucchiola
my single is dropping Yesterday at 1:31 p.m.
Charli XCX and Rina Sawayama Answer Our Begging, Drop ‘Beg for You’ Featuring an extremely well-executed sample of “Cry for You” by September.
yeezy season Yesterday at 1:18 p.m.
Ye Announces Donda 2, in Case You Haven’t Gotten Enough of Him Out February 22, or 2/22/22.
nominations Yesterday at 12:38 p.m.
PGA Noms Boost Tick, Tick … Boom! and Being the Ricardos Oscar Odds Spider-Man: No Way Home did not receive a nomination.
nevermore Yesterday at 12:13 p.m.
Nicolas Cage’s Pet Crow Thinks He’s an ‘Ass’ But he likes “the goth element.”
west side story Yesterday at 12:03 p.m.
A Timeline of the Allegations Against West Side Story’s Ansel Elgort West Side Story co-stars Rachel Zegler, Ariana DeBose, and Rita Moreno addressed the claims over a month after the premiere.
vulture 10x10 Yesterday at 12:00 p.m.
The Indie Puzzle 33-Across: “Dear Evan Hansen” prop.
music supervision Yesterday at 11:28 a.m.
Yellowjackets and Euphoria’s ’90s Music Is Filling a ‘Void of Angst and Anger’ Music supervisor Jen Malone breaks down the two shows’ musical fixations and teases some tracks still to come.
overnights Yesterday at 11:00 a.m.
And Just Like That … Recap: Put a Ring on It Everyone is having relationship issues.
More Stories