Of all the disgusting concepts Supernatural has presented to us over the years, none has been grosser than THE BASIC HUMAN BODY. Sure, all of this show’s myriad beheadings, retractable fangs, festering pustules, noseless ghouls, and bloody stumps haven’t been very appetizing, but let’s be real, the human body is the ultimate nightmare and, worst of all, IT’S REAL. I’m frankly tired of mine, how about you? On Supernatural, demons call us “meat suits,” as if we were lucky enough to be so simple. No, inside each of us is a wet, pink, and red factory of repulsiveness, and “I’m No Angel” really brought the horror home for Castiel this week. It was hard enough for everybody’s favorite fallen-angel-cum on-the-spectrum-sexy-hobo to figure out how to keep himself alive, but now he’s having to endure the terrifying indignity of all of our bodily functions as well. Truly tragic and disgusting. 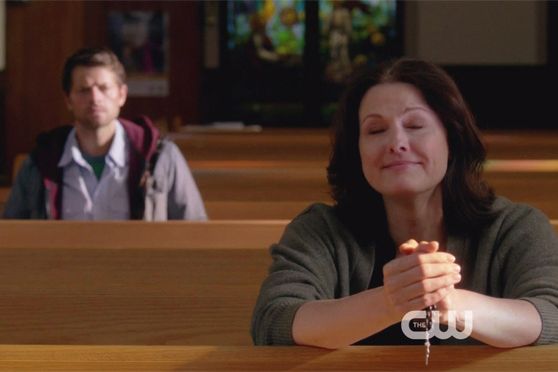 Let’s get to the point: This episode was terrific. The main reason: Castiel. Supernatural has always alternated between mythology and monster-of-the-week, frequently even merging the two. But “I’m No Angel” was the best kind of Supernatural episode: mythology as character study. We first met Castiel in a church-run men’s shelter using the alias Clarence, a name Meg had once called him derisively. Without his grace, Castiel was now fully human, which meant he was squeezing toothpaste directly into his mouth, sleeping on abandoned city buses, urinating way too often, eating pickles directly out of the garbage, and, of course, getting boners. Truly an existential crisis if there ever was one. But it turned out Castiel’s problems were even more profound. In a legit wonderful scene, he trudged into a church and attempted to explain to a devout woman that God doesn’t hear her prayers anymore or even care about her in the slightest. But just because Castiel spoke from experience didn’t make him correct, at least not according to the faithful. And come to think of it, hadn’t God directly intervened in the Supernatural mythology tons of times already? Get your facts straight, Castiel. But the issue remained: Castiel no longer had a place in heaven, physically or spiritually, and it had turned him into one sad hobo. 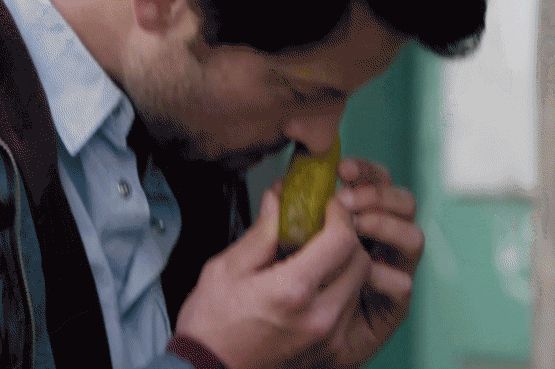 Which brought us to the fallen angels. They had a new leader! 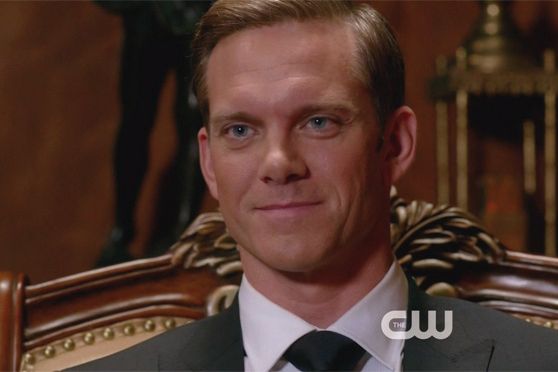 First off, can we all agree that Supernatural is very punk rock for making the angels so awful? Sure, this has never been an explicitly pro-Christianity show, exactly, but after spending so much time seeing our heroes align with the forces of heaven, it does seem surprising and refreshing to see these fallen angels portrayed as virtually identical to demons. They brutally murdered two priests, for starters. Also, in this episode, we saw an angel invade a human host in the form of smoke tendrils. Correct me if I’m wrong, but in the past hasn’t that process been so blinding and violent that onlookers’ eyeballs exploded? Well, whatever, it’s all very demonic now, just with a bluer color scheme. As I mentioned earlier, this season’s New Angelic Order is now fronted by Bartholomew, whose gravely handsome authority gave off a major Agent Smith vibe. Supernatural’s certainly had its fair share of Well-Dressed Big Bads in the past, but Bartholomew immediately brought his sinister power to the fore in a way Dick Roman never really did. He seems formidable and ruthless, but his scheme to use a televangelists’ podcast (podvangelist?) to recruit suitable angel vessels actually made sense. See, he needed to find the right vessels because weak humans were prone to exploding. Because, again, our bodies are the worst. 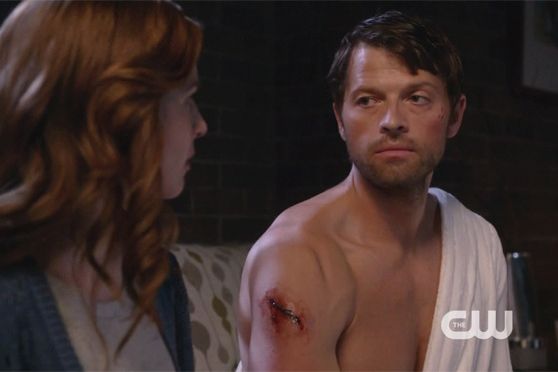 Apparently Castiel was now a sort of Bin Laden figure to the rest of the angels, which meant they REALLY wanted to catch him. Much of the episode was then devoted to Castiel trying to elude the freelance reapers that Bartholomew had hired. Which brings us to April. Ladies, how many of you have invited hobos into your homes for some hot sexual romance action? April sure did. At first, it seemed like she had seen something special in Hobo Castiel, like specifically his bone structure, for example, or maybe how he looked in wet clothes. But later, after April took his virginity (!), we learned that she was actually a reaper. A reaper who will have sexual intercourse with men who have been living on the streets and presumably smell terrible, and only then carry out her job. That kind of reaper. 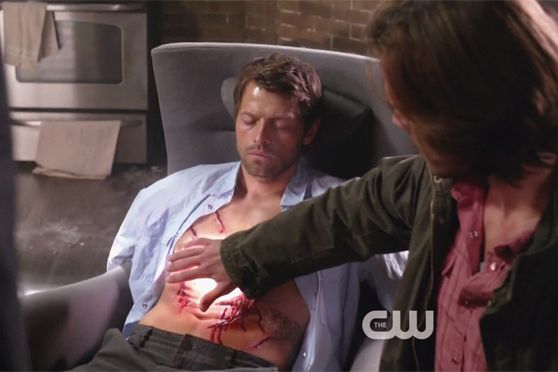 Anyway, after April broke Castiel’s heart, but before she could slice it out of him with his angel blade, the Winchesters arrived to save him. But they were too late and Castiel got stabbed to death! Fortunately Sam had a magic man inside of him. Guys, I truly love the Ezekiel story line this season. Sam’s possession by a powerful, heroic, dickish angel is not only an intriguing idea, but the deus ex machina possibilities are endless! Need to track down Castiel? Knock on Sam’s forehead and ask for Ezekiel. Need to resurrect a dead Castiel? Same deal. I’m still not 100 percent convinced it’s necessary for Dean to keep this possession a secret from Sam, but that’s classic Supernatural dramatic contrivance for you. Same with Ezekiel’s insistence that he couldn’t live in the bunker with Castiel and Castiel needed to go back to his hobo camp. Seemed like a very arbitrary decision, but still compelling as heck (pardon my French). 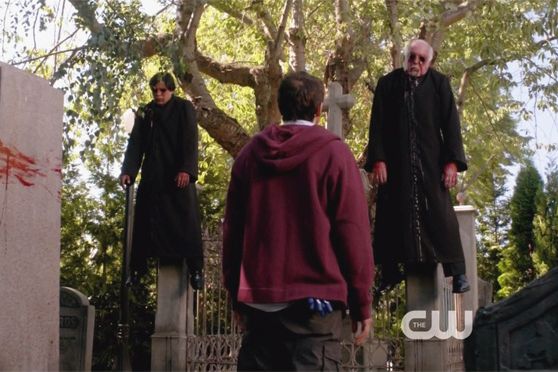 After last week’s exercise in premature wheel-spinning, “I’m No Angel” rebounded in a big way, serving as both a reminder of Supernatural’s greatest strengths and also further proof that this show does indeed have plenty of life left. And Castiel. So much Castiel. Did you get chills at the end when he humbly complimented the Winchesters on being alive and doing it well? Man, I did. Simple moments like that really cut to the marrow of what makes us love these guys so much. Not their one-liners or fantastically foolish bravery (which are both great, sure). No, it’s the simple moments of open-hearted, humanistic understanding they betray every now and again. “I’m No Angel” continued to drill into this rich vein and from the looks of it, there’s much more where that came from.

Now if you’ll excuse me, I need to have my soul transplanted into a robot or something, because this is disgusting.

+Comments Leave a Comment
Supernatural Recap: The Angel Is a Tramp

category is: categories! 8:04 p.m.
The 2023 Oscars Will Go Back to Celebrating All 23 Categories Live Apparently the Academy got tired of being dragged.
coming soon 5:40 p.m.
It’s a-Here, Mario! Chris Pratt, look how you massacred our boy.
on the record 3:37 p.m.
Will Smith, Oscars Hopeful, Is Very Sorry About the Slap “Hurt people hurt people,” Will Smith told Trevor Noah while promoting his upcoming film, Emancipation.
hosts with the mosts 3:33 p.m.
Steve Martin and Martin Short to Tag Team Saturday Night Live Austin Butler has the easy, no-pressure job of following them up as host.
trailer mix 3:00 p.m.
Let the South Side Season-Three Trailer Repossess Your Heart The Rent-T-Own crew returns to HBO Max on December 8.
vulture lists 3:00 p.m.
16 Great Christmas Movies That Aren’t Christmas Movies Including L.A. Confidential, Three Days of the Condor, and You’ve Got Mail.
the need for rewatches 2:35 p.m.
Top Gun: Maverick Is Circling Back to Theaters Before It Hits Paramount+ Throttle up!
vulture festival 2022 2:23 p.m.
Zachary Knighton Finally Got the Happy Ending That Happy Endings Didn’t Magnum P.I. restored his faith that shows can in fact be saved!
vulture recommends 1:58 p.m.
Pentiment Is a Miracle A medieval murder mystery is one of the best video games of the year.
vulture festival 2022 1:57 p.m.
StraightioLab Finally Explains to Us What a Podcast Even Is Comedians Sam Taggart and George Civeris generously educated us on the audio format.
vulture 10x10 1:47 p.m.
The Blanc Puzzle 21-Down, Four Letters: Word used 49 times in Beyoncé’s “Formation.”
trailer mix 1:24 p.m.
Red and Kitty Forman Deal With More Teens in That ’90s Show Topher Grace, Laura Prepon, and most of the original cast will return.
trailer mix 1:09 p.m.
Julianne Moore Is a 21st-Century Woman in When You Finish Saving the World Jesse Eisenberg takes on an A24 mom movie, starring Finn Wolfhard as the disaffected son.
tbs needs content 12:45 p.m.
Adam Sandler, King of Awards-Show Acceptance Speeches, Is Back His teen daughters “wrote” him a hell of a speech for the Gotham Awards.
last night on late night 12:13 p.m.
James Austin Johnson Sings, Croons, Shouts Through a Bob Dylan History Lesson With some impeccable impressions of the songwriter’s eras.
chat room 11:39 a.m.
Andor’s Kathryn Hunter Saw Eedy Karn’s Comedic Potential Immediately “She’s probably a thwarted woman herself, and she’s overcompensating with her son.”
vulture lists 11:38 a.m.
The 10 Best Versions of ‘Have Yourself a Merry Little Christmas’ A song for the cynics, the sad girlies, and the lonely boys.
rip 11:29 a.m.
Clarence Gilyard, Walker, Texas Ranger and Die Hard Star, Dead at 66 Following a career in acting, he became a professor of theater and film.
today on daytime 11:01 a.m.
Some People Wait a Lifetime for a Moment Like Matt Rogers Meeting Kelly Clarkson “This is unfortunately one of those moments where you’re meeting your absolute biggest fan.”
money money money 10:20 a.m.
Glass Onion Solves the Mystery of Getting People Into Theaters The whodunit made an estimated $15 million from just 600 theaters.
More Stories