Well, points for keeping us on our toes. With last week’s very good season premiere, the CW’s most illustrious demon dramedy felt confident, inventive, and surprisingly fresh considering it is now one thousand years old in TV years. As far as season premises go, this whole fallen angel angle falls somewhere on the spectrum between comfortingly familiar and thrillingly unpredictable. Angels, man. Bring ‘em on. But WHOOPS. Then came this week’s episode, “Devil May Care.” And it was not a very good episode! Uh-oh, do I need to take back all my praise from last week? Whereas that premiere felt like a really good mixtape of Supernatural’s best characters and concepts, “Devil May Care” was the kind of go-nowhere, boring wheel-spinning that Supernatural usually doesn’t resort to until around episode sixteen, when it’s trying to stall for time. It’s too soon for this, Supernatural! Fortunately, at least two great things prevented the episode from sliding into complete ruination: Abaddon and Ezekiel. They were terrific! So we can probably call off the Hellhounds for now. Get back in the Hell Kennel, Hellhounds. Finish your Hell Kibble. Guys, let’s talk about “Devil May Care.” 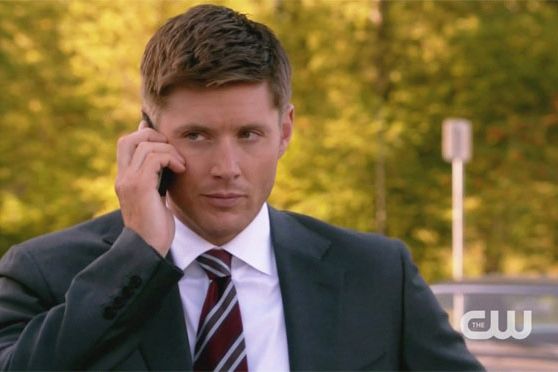 Last week I openly admired Supernatural for rehashing the same plotlines over and over, because it had developed a formula that just works. Uh, maybe I spoke too soon, because “Devil May Care” was filled to the brim with retreads of old characters and conflicts, but in this case it all just felt tired. You know what’s interesting about Kevin? Nothing. But what’s clear is that for the show’s purposes he’s the new Bobby. He just hangs out in a weird headquarters digging up expository information for the Winchesters and occasionally impersonates FBI supervisors when the boys run afoul of crime scenes. Which, wow, was that particular scene excruciating this week. It’s one of this show’s more audacious running jokes how easily the Winchesters infiltrate important crime scenes just by wearing neckties, but this week they were rejected from a MILITARY crime scene because this show decided to not be ridiculous for a split-second.

But that split-second ended when Kevin blackmailed the female commanding officer with incriminating, sexy vacation photos he’d found? Not only did that make zero sense, it was exactly the kind of rotten bro-humor that occasionally ruins this show. Knock it off, Supernatural. And on the subject of failed humor, let’s not get into Dean’s pop-culture references this week. Actually, let’s do: Is it that Dean’s pop-culture references are supposed to be funny, or that they’re so unfunny they’re back to being funny again? These jokes render old episodes distressingly dated, but this week’s references to Katniss Everdeen and Seal Team 6 felt even more instantly dated than usual. Sorry, but trying (and failing) to get the laziest laughs possible is usually a bad sign for the rest of the episode. You’re funnier than this, Dean! 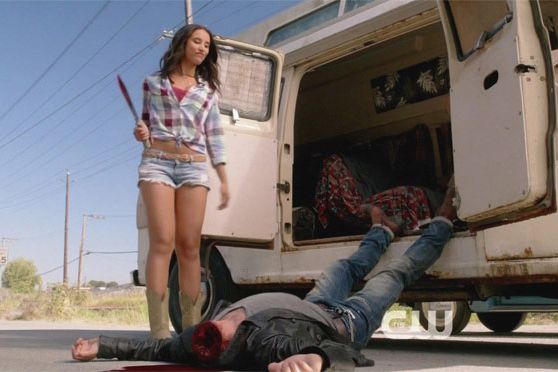 Anyway, if Kevin is the new Bobby, then this hunter lady Tracy is the new Jo. Inasmuch as she’s a totally underdeveloped cardboard cut-out with no inner life to speak of. Look, I get it. You most likely do not want to read a weekly essay on how Supernatural still does female characters very badly, but introducing a character bent over a car engine in cut-off shorts and then making a visual joke that suggests she’s having sex with a random motorist is not a step in the right direction, representation-wise. Anyway! Forget about Tracy (the writers have), let’s talk about how Ezekiel is basically the new Castiel. By that I mean he is a very attractive angel with an offbeat cadence, questionable intentions, and a fondness for deus ex machina interventions. The undeniable highlight of “Devil May Care” involved Sam getting beaten nearly to death by some demon-possessed soldiers only to have Ezekiel suddenly take the wheel in time to incinerate them all. I guess I thought Ezekiel had lost his wings in the fall, but still: It’s hard to beat the pure, heart-pounding imagery of a glowing-eyed Sam with angel wings: 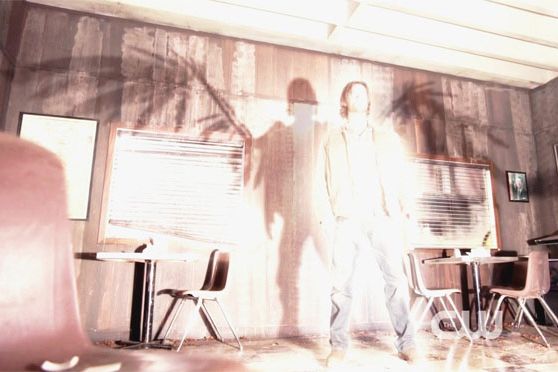 Like Castiel before him, Ezekiel appears destined to show up at exactly the right time all the time, but the clever twist is that he’s inside Sam like a hitchhiking superhero. That’s just exciting and creepy and interesting all at once. On the other hand, “Devil May Care” really wanted us to share Dean’s concerns about Sam’s lack of agency in this situation, but that was another of this episode’s missteps: It didn’t seem that bad? Ezekiel may turn out to be a bad guy, sure, but right now he’s pretty undeniably heroic and helpful, and it’s not like they had any other options. Let’s be real, who among us would not like to be possessed by this guy? Get in me, angel. 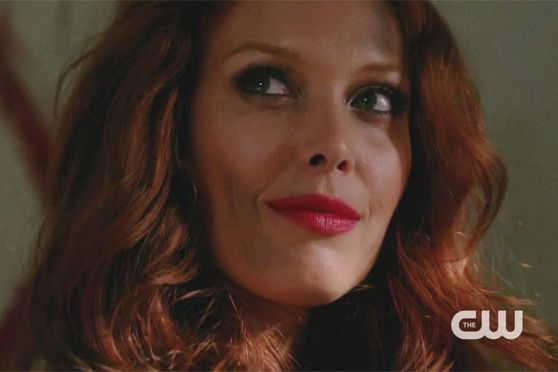 If that last statement sounded inappropriate, please keep in mind that this week Abaddon offered to literally fly up Dean’s butt. Abaddon is pretty great, right? Obviously the main thing about Abaddon is the way she looks: all red-headed and statuesque and sneering. (Which, in Supernatural, qualifies as dynamic.) But what’s becoming truly compelling about Abaddon is her master plan: to steal Hell back from Crowley and return it to the Hellraiser-esque torture emporium it used to be before Crowley remodeled it into an endless beige hallway. Many of Supernatural’s most compelling plotlines have involved the internal bureaucratic struggles of alternate realms, so now that Abaddon is now directly at odds with Crowley, it’s hard not to root for her. Her version of hell is not only more cinematic, it promises to make hell scary again. And if it leads to Crowley actually helping the boys (I love when Crowley is helpful), then Godspeed, you brassy Demon Knight. 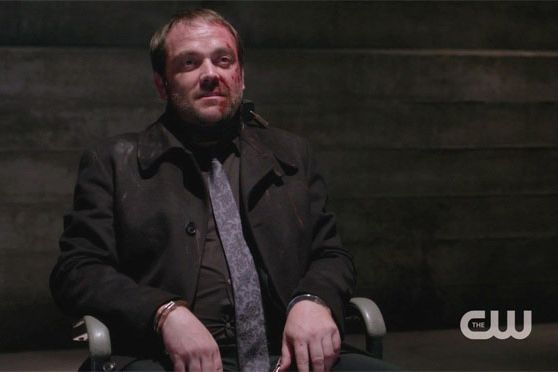 “Devil May Care” also featured a subplot involving an incarcerated Crowley almost succeeding in manipulating Kevin into breaking away from the Winchesters, but I fell asleep just typing that. We all know Crowley is a great character, a classic. But are you getting tired of seeing him tied to a chair all the time? This episode made me feel restless in a way that doesn’t normally happen this early in a season. Plus, it had a weird energy! Particularly toward the beginning, some of the conversations seemed so stilted and drawn out that I had to pause the episode and make sure I didn’t have a gas leak in my apartment. Sure, both Abaddon and Ezekiel had intriguing moments, but since nearly every plotline was left unresolved, it’s like, okay? But then what? Mythology episodes can be very fun and rewarding for those of us who prefer long-form storytelling, but at this point I’m already in the mood for a haunted doll case or for Sam to seduce another werewolf or something. Anything. Just do not bore us, Supernatural.

fan encounters 16 mins ago
Cara Delevingne Hot Girl Summers Too Close to the Sun Attending the BBMAs as Megan Thee Stallion’s plus-one and/or assistant.
hole-some content 1:52 p.m.
Outer Range’s 15 Hole-iest Moments, Ranked Life is short, let’s talk about a hole.
going to hollywood 1:07 p.m.
X Factor Alum Replacing American Idol Winner on The Voice Camila Cabello takes over for Kelly Clarkson this fall.
vulture 10x10 12:00 p.m.
The Hot Puzzle 3-Down, Four Letters: MacGuffin in a heist movie, maybe.
overnights 10:55 a.m.
90 Day Fiancé Recap: Bringing Up Baby Kudos to Emily’s parents for staying out of this fight.
bbmas 2022 9:02 a.m.
The Highs, Lows, and Whoas of the 2022 Billboard Music Awards Whoa: A fever dream of an opening.
since when Yesterday at 10:40 p.m.
Machine Gun Kelly Dedicates 2022 BBMA’s Performance to Wife and Unborn Child And on a Blood Moon, no less.
overnights Yesterday at 10:33 p.m.
Barry Recap: Justice Is Still Attainable If Barry does want to genuinely atone for what he’s done, what does that look like?
overnights Yesterday at 9:00 p.m.
The Real Housewives of Atlanta Recap: Let the Games Begin Playing games with the RHOA cast more often than not ends in orchestrated chaos.
overnights Yesterday at 8:57 p.m.
Gaslit Recap: Hot Tub Backroom-Deal Machine It’s pretty clear that Dean does not like himself right now. Nor should he!
another one Yesterday at 8:52 p.m.
Kourtney Kardashian and Travis Barker (Maybe) Got Married (Again) Maybe this time, we’ll be lucky.
timey wimey Yesterday at 7:20 p.m.
Oi Spaceman! David Tennant and Catherine Tate Are Coming Back to Doctor Who Are we bothered?
snl Yesterday at 7:02 p.m.
SNL Thinks Your Long-Term Boyfriend Is Old Enough to Run Errands All on his own!
2022 bbmas Yesterday at 6:52 p.m.
Here Are the Winners of the 2022 Billboard Music Awards A big night for Ye’s Christian/gospel rep.
snl Yesterday at 5:52 p.m.
Steve Martin Explains the History of the Whoopee Cushion on SNL Along with Selena Gomez!
overnights Yesterday at 3:06 p.m.
Saturday Night Live Recap: Selena Gomez Is Looking for Love Selena Gomez makes her SNL hosting debut in an episode that has more misses than hits.
overnights Yesterday at 2:00 p.m.
Conversations With Friends Recap: Kiss and Tell Bobbi is too self-absorbed to realize Frances has a crush of her own.
overnights Yesterday at 12:00 p.m.
Conversations With Friends Series-Premiere Recap: Just Being Polite We’re back to the Sally Rooney Cinematic Universe, this time investigating the inner lives of four friends/lovers.
yikes Yesterday at 9:00 a.m.
A Warning From the Future About The Time Traveler’s Wife A time-traveling TV critic considers Steven Moffat’s strangely chintzy, tonally odd adaptation of the 2003 novel.
theater review May 14, 2022
A Cherry Orchard That Chops Down Most of the Trees Chucking out the familiar in search of the truth.
More Stories