Here’s the thing. After nearly a hundred episodes, I’m done excusing Glee for being off the damn rails just because they take the time to be self-referential about it. Sue telling Bree (who I can now assume was cast on Glee wholly based on how she looks wrapped in police tape, because damn) that the New Directions calling themselves Katys and Gagas is the most annoying thing they’ve ever done doesn’t retroactively make the whole conceit bearable. A willingness to laugh about how lazy your writing is isn’t a virtue. Put another way: I am done awarding participant ribbons to Ryan Murphy.

The main problem with last night’s episode is that “Are you a Katy or a Gaga?” isn’t a particularly interesting question. I’m not even sure what that question is asking. Lady Gaga and Katy Perry certainly aren’t the same (although the only time I remember seeing them together on TV, Gaga was wearing a mask, so who even knows), but they’re not exactly polar opposites. They’re both late-twenties female pop singers, each weird or over-the-top or experimental in her own way. Gaga’s a bit darker, Katy’s a bit lighter, but it seems like there’s more that unites them than divides them, even if one’s marrying the night and the other’s dreaming teenage dreams during it.

The episode is held up by the tenterhooks of a plot: the New Directions each need to learn to harness the power of lady divas in order to beat Throat Explosion (yep) at Nationals — each of them needs to be both a Katy and a Gaga, both while performing and in real life. This would all be very compelling if being a Katy or a Gaga were a real thing. Marley’s sweetness is turning Jake off, Sam’s worried he’s not cool enough for Nurse Penny, Kurt considers what spotlight he is in or should be seeking, etc.

Sam’s romancing of Nurse Penny is, weirdly, the focus of the episode. She thinks he’s not edgy enough, he tries to be edgy, it turns out she doesn’t really want him to be edgy. It’s basically like “Gift of the Magi,” only with a temporary tattoo from a Skrillex concert and a massive, creepy set of skeleton wings. They’re cute enough together, but it’s a little strange to have so much attention paid to Penny over the episode’s other, unarguably more famous guest stars. That aside, Sam gets plenty of chances to be a total goofball, and weird, scene-stealer Sam is one of the best things this show has going for it lately. Best of all is his passion for a television show called True Jackson, VP. “What would you do if you landed your dream job as a big shot at a major company, and you were only 15? I mean, how would you decorate your office?” When I first watched the episode, I thought Glee had invented the series, but it’s real, and I’m thrilled.

All of that said, the performance of “Applause” that Sam arranges — and the build up to it — is a bright spot of the episode. Sam arranges for a schoolwide screening of an advance hype video complete with reverse-psychology subtitles, which Stoner Brett watches with rapt, baffled attention. Ryder is half naked in a cage. Artie is attached to a massive parachute. Sam is shirtless and rigged up in massive wings. Blaine is … wrapped in actual foil and wearing a near-mullet wig. It’s deeply weird and pretty funny, although possibly not in that order.

Related: It’s really hard to consider “Applause” an anthem of edge now that it’s in one of those car commercials with the creepy hamsters.

Immediately after that performance, Marley gets suspended from school (or just from the New Directions, maybe?) for refusing to wear a Lady Gaga–style seashell bra. I’d go into why it’s completely inappropriate for a teacher to punish a student for not being comfortable with dressing provocatively or whatever, but I hear that Mr. Schue sings “Blurred Lines” next week, so I’m prorating my outrage. Later on, Jake cheats on her because she won’t put out. It’s a bad week to be Marley, but the really tragic thing is that Jake seems absolutely certain that he can get Marley to sleep with him just because she’s wearing a pink Katy wig.

Back in New York, Rachel’s in rehearsals for Funny Girl, and talking about how singing “My Man” repeatedly is sad, in light of Finn’s death. It’s almost an aside, but hopefully Glee will continue to find ways to integrate the characters’ grief without forcing or unduly focusing on it. Meanwhile, Kurt is starting a band, bravely abandoning the convention that people who start and/or participate in bands have to play a musical instrument. (NYADA, it would seem, comes with the same at-the-ready backing bands as McKinley High.) He’s holding open auditions, but the only performer to show up is a sparkly steam-punk kid named Starchild (played by Adam Lambert).

Starchild’s scenery-chewing audition is undeniably great (complete with swinging chandeliers, air humping, and fingerless gloves), but Kurt isn’t enthused. He explains to Rachel that Starchild’s aesthetic is too out-there, and that he wants to do something mainstream and accepted for a change. Rachel tells him that he’s far too specific for something like that; he shoots back that “specific” is just code for “unsuccessful.” It’s one of the more nuanced conversations we’ve heard on Glee about, well, anything, and it’s a really interesting struggle for Kurt, should the show continue to pursue it. After some soul searching, and a very well-acted scene between him and Starchild (out of costume and as his true self, Elliott), Kurt relents, and the band is on! Hooray!

Except then, the newly formed band (Pamela Lansbury, which, okay, fine) and the New Directions launch into a joint rendition of “Roar,” during which Kurt (who is, again, the proud founder of a new band) doesn’t have a solo. He barely sings at all. Loincloths and vine-swinging notwithstanding, that oversight spoils the number, and maybe even the entire episode. Like, you wrote an episode of television about a person who starts a band. How hard is it — on a show that is about people singing — to end that episode with that person singing a song with that band? From the look of “Roar,” Kurt has finally achieved his dream of being a different kind of backup singer. Score!

And next week, we twerk. 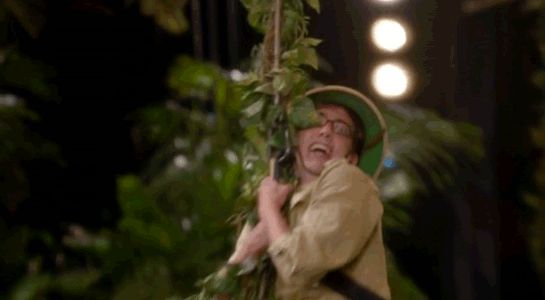 +Comments Leave a Comment
Glee Recap: A Katy Perry or a Lady Gaga

text me back! 8:36 p.m.
Winona Ryder Leaves Finn Wolfhard on Read All the Time “She’ll text you, and then you’ll text her back, and then she won’t text you ever again.”
hard pass 7:40 p.m.
Seth Rogen Wouldn’t Do a Freaks and Geeks Reboot Okay, but what about Undeclared?
prison 7:13 p.m.
Jafar Panahi Goes on Hunger Strike to Protest Detention at Evin Prison Panahi should have been released to await a retrial on charges stemming from 2009’s Green Revolution.
guess who's back 6:41 p.m.
Mary Cosby Reportedly Returning to RHOSLC in ‘Friend’ Role Cosby will be the friend of Meredith Marks, friend to all (except Lisa Barlow).
ticketmonster 6:19 p.m.
Biden Wants His Beyoncé Tickets Like the Rest of Us He called for limits on junk fees for concerts and sporting events.
grammys 2023 5:11 p.m.
Benito, Blige, and Brandi Among Grammys Performers Kacey Musgraves, Sheryl Crow, Mick Fleetwood, and Quavo will perform during the “In Memoriam” segment.
hard launch 3:36 p.m.
Paramount+ and Showtime Hard-Launch Their Merger Paramount + Showtime – multiple shows = new service.
respect the classics 2:12 p.m.
Ozzy Osbourne Retires From Touring Over Spine Injury “Never would I have imagined that my touring days would have ended this way.”
relaxing things 1:41 p.m.
Drift Off With Joe Pera’s New Podcast The comedian is back on his bullshit. The bullshit, in this case? Helping you fall asleep.
how to with jerrod carmichael 1:00 p.m.
Jerrod Carmichael to Helm HBO Comedy-Documentary Series Eat your heart out, John Wilson.
vulture 10x10 12:00 p.m.
The Affair Puzzle 20-Down, Six Letters: Accio and Alohomora, for two.
grammys 2023 12:00 p.m.
The Secrets of Pop’s Favorite Mastering Engineer How to make Taylor Swift, Harry Styles, and Adele sound perfect.
vulture sports! 11:26 a.m.
Actor Tom Brady Retires From Other Career Just two days before the release of 80 for Brady.
sad blawg 10:46 a.m.
Gawker Is Gawn, Awgain Bustle Digital Group has pulled the plug on nü Gawker and laid off 8 percent of staff.
doctor's orders 10:19 a.m.
Cash Dr. Phil Outside His show is ending after 21 seasons, howbowdah?
summer renaissance 9:13 a.m.
Move Out the Way, Beyoncé Is Taking Renaissance on Tour Good luck cuffing those tickets.
sound thinking 9:00 a.m.
Netflix Adds a Shiny New Audio Option for Top-Paying Subscribers More bang for your buck, even on crappy laptop speakers.
respect the classics 8:15 a.m.
The Piano Man Campaigned for Warren Zevon’s Rock Hall Nomination “If anyone deserves to be, he does. He was a real original, and I don’t know if that’s appreciated enough.”
respect the classics 8:07 a.m.
Cyndi Lauper and Willie Nelson Lead 2023 Rock Hall of Fame Nominees 14 artists made the shortlist, connecting every genre of music.
the industry 8:00 a.m.
Reality Check The boom — or glut — in streaming documentaries has sparked a reckoning among filmmakers and their subjects.
By Reeves Wiedeman
More Stories