This week’s episode had to be a step down from last week’s. It had to be. But that didn’t stop Lockhart/Gardner from going for the jugular. Between cases within cases and old familiar faces, this felt like a more typical hour of The Good Wife. So grab an empty soup pot, squash your fists, and, for heaven’s sake, keep Grace out of the kitchen: Here’s what we learned from last night’s slightly calmer episode of The Good Wife.

But What Do Cary’s Sheets Look Like?
The episode opened with a highly unusual “The Next Day” caption. (Hey! That’s the name of this episode!) We get a glimpse inside Diane, Will, and Alicia’s respective bedrooms. Should we go overboard with the analysis and read into the color choices of their sheets? Maybe not. But if you had any doubt who the “Captain Sunshine” referenced in the jaunty Lucy Schwartz tune that played over the opener is, look no further than Will’s goldenrod pillows. (More on his pillow companion later.) While I completely buy what Will and Alicia are up to the morning after (too much Chum Hum champers, Alicia?), I take issue with Diane’s scene. Not with Kurt McVeigh. He is perfection, as ever. But I can’t really buy that Diane would be so nervous as to resort to index cards. I get it, it’s her last case as a lawyer and it’s an issue we care about. I get that making her looking earnest and vulnerable here sets up both her crushing disappointment when she hears about the judgeship and makes a nice contrast for the steel she develops in her spine toward the end of the hour. But, come on, we know Diane’s a barracuda. Even people just tuning in this season know Diane’s a barracuda. The cards don’t fly with me.

You Can Get Anything You Want at Alicia’s Apartment
Alicia’s apartment door (such a crucial set piece last season’s finale) might as well be a revolving one this week. Right off the bat we get both Marilyn Garbanza and indecisive plaintiff Heather Sorentino (played by Maria Dizza, last seen tanking Piper’s soap-making dreams on Orange Is the New Black). I actually really love how pushy Garbanza is, despite my residual Melissa George feelings. She’s just trying to do her job and this episode proves she’s actually rather good at it. In terms of the pregnancy plot, actress Melissa George is actually pregnant, so this is one of those instances where the plot is bent to serve the needs of the performer. That being said, I loved that Garbanza used her pregnancy to make herself appear vulnerable and curry some favor with Alicia. It was positively Crozier-esque.

The Case of the Week and the Case Within the Case of the Week
Speaking of which, my favorite blonde antagonist was sort of sidelined by the Lockhart/Gardner vs. Florrick/Agos battle. Which is too bad, I adore her and, more than that, how much Alicia hates her. There’s quite like an expertly deployed Alicia eye roll. But the case of the week (that is Diane’s and then Alicia’s and then Diane’s again) centers around a gun that accidentally went off during a robbery, killing a car wash owner. The plaintiff is his widow, Heather Sorentino, and the defendant is the gun manufacturer. As is often the case on The Good Wife, the case of the week stands in for a larger issue, namely the Protection of Lawful Commerce in Arms Act (or, as the show later refers to it, the PLCAA). This act, signed into law in 2005 by President George W. Bush, was called by the NRA “the most significant piece of pro-gun legislation in twenty years.” The law is meant to protect gun manufacturers for being blamed when a gun is used in a criminal act. In the wake of Sandy Hook and the Aurora, Colorado, shootings, the PLCAA is under extreme scrutiny and attack.

In addition to the Larger Issue Case, we also get another show staple this week — the Case Within The Case — as Cary goes up against Geneva in order to get the car wash robber off the hook and decriminalize the Sorentino case. And thirdly, of course, Alicia dragged Will before the disciplinary board in order to try to wring the files from Lockhart/Gardner. This means we got three judges this week, including repeat offenders Richard Kind and Edward Herrmann. 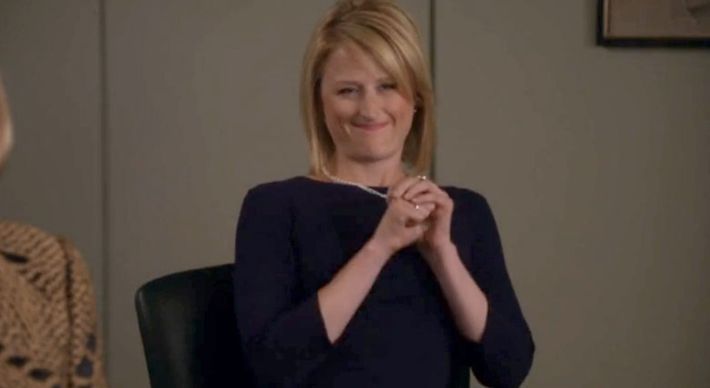 Target Them for Acquisition
But not nearly enough Nancy Crozier! And that’s why a throwaway line from Will midway through the episode put a little spring in my step. When he was addressing the partners in the Lockhart/Gardner boardroom and outlining his plan for world domination (first Chicago then New York then L.A. then, well, you know), he said he wanted to destabilize the competition. How? By acquiring the top twelve litigators from competing firms. Do you know what that could mean? Do you? Crozier, Canning, Nyholm, oh my! (Much as I love her, I don’t think Tascioni is on the list.) I’m not saying they will all come work for Lockhart/Gardner, of course not. Though, if the Michael J. Fox Show were to be canceled …

Is Cary Getting Stupider by the Minute?
Seriously, between spilling the beans to Diane last week and again to Marilyn this week, I’m not very impressed with young Master Agos. And he lost the criminal case! I don’t know if the increasingly poor decisions of Cary Agos are supposed to make Alicia’s choice look all the more foolish, but I don’t think it’s necessary. The rest of the fourth years make her look like she’s surrounded by idiots, we don’t need to drag Cary into the fray. When Alicia chose to leave, she chose to leave with Cary as her partner and, before this season, that didn’t look like a terrible choice. So get it together, Cary, and button up.

Getting Screwed by Governor Florrick
Oh, poor Diane. Oh, wondrous Christine Baranski. Such highs and lows in this episode for the lovely Ms. Lockhart, but I am delighted to see that she’s staying. We’ll allow her this quiet moment of vulnerability in the bathroom because he knows how deadly she’ll be once she she moves on to the anger stage. 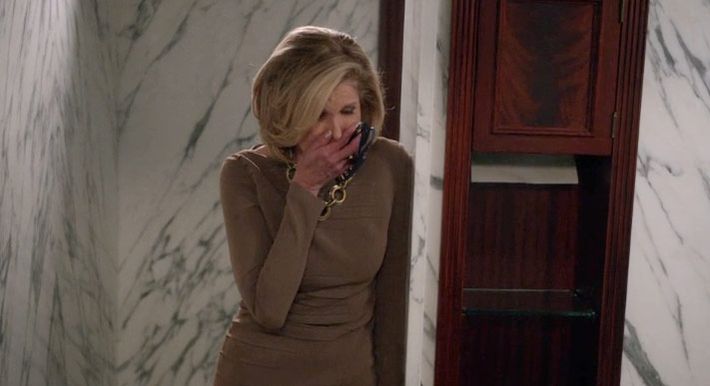 A Marriage of True Minds
Diane may not have her judgeship, but I am still a massive fan of her relationship with McVeigh. I know many of the commenters here take exception with McVeigh as a viable love interest and partner (given his tea-party affiliation), but let’s appreciate the way in which they strive to keep their professional lives separate and how the show did an excellent and subtle job drawing a comparison to Alicia and Peter. Say what you will about Garbanza. Say that she wears far too much eyeliner. Say that she really needs to stop calling him “Peter,” she’s right about Governor Florrick and his blurred lines. Diane and Kurt, on the other hand, try to keep it separate. So let’s enjoy their lovely relationship and try not to think about whatever was going on with Grace and the guns this week.

Like a Low-Rent Caprica Six
What, what, what is Will doing? Trying to get over Alicia? Sure. But are we supposed to be onboard with his new lady companion? No. We’re supposed to look askance. I know a lot of you were on the “Alicia Is a Monster” side of the equation last week, but I’m not sure the show is on that side with you. Will with his power-hungry scheming and anti-Alicia partner choice is the one who’s fast-tracking to monster status.

The Girl Wonder
It should be noted that Robyn had a banner episode this week. She got one up on Kalinda. That’s rare. She had her peak adorable moments fondling fake rats and quirkily eating pizza. And, finally, she’s the one who came up with the breach of warranty argument in the gun case. An argument so good, Diane straight up stole it. Not bad, Robyn. Not bad. 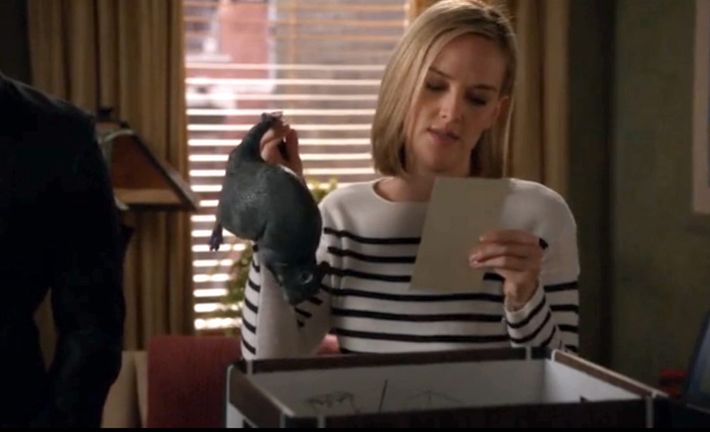 Through With Being Polite
At the close of the episode, Will tells Diane it felt like old times. But somehow I don’t think the future Lockhart/Gardner victories are going to end in charming office slow dances. Will isn’t the villain, folks? He was dressed in black from head to toe in the final shot reveling in the way he crushed his enemies. (By the way, with the whole Wallace/Frey plotline, shouldn’t Alicia know better than to trust a Frey? Doesn’t she watch Game of Thrones?) And who do we think tipped off Marilyn about Peter’s involvement in the Chum Hum deal? Will. And boxes of rats, Will, really? Then again, Will and Diane are right about Peter. But Alicia? Alicia who spent the episode just trying to get her teenage daughter out of the kitchen? I don’t think they’re right about her. 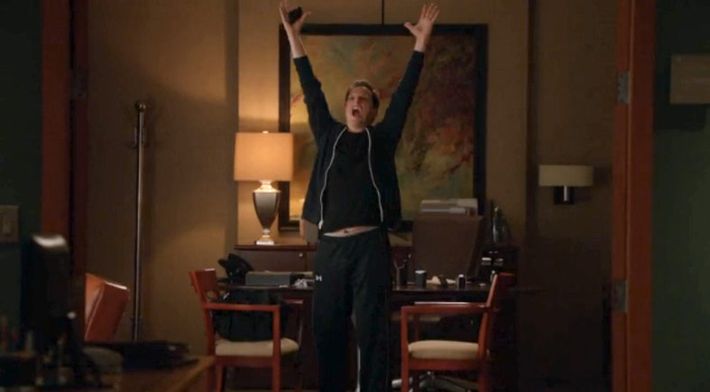 diamond district 4 mins ago
We Cordially Invite You To Meet Uncut Gems’ Non-Actors Uncut Gems uses — and subverts — stars like Adam Sandler, but the movie is built on a handful of first-time actors from the diamond district.
By Hunter Harris
controversies 1:54 a.m.
Doja Cat Issues Statement Addressing Allegations of Racism “I shouldn’t have been on some of those chat room sites, but I personally have never been involved in any racist conversations.”
at-home concerts 12:44 a.m.
The Yeah Yeah Yeahs! Live From Karen O’s Closet! If you own a fog machine, the world is your sold-out venue.
cybertruckin' Yesterday at 11:42 p.m.
Hey, You Wanna See Jay Leno and Elon Musk Tootle Around Town in a Cybertruck? “When the Apocalypse comes, you’ll be glad it’s bullet-proof.”
overnights Yesterday at 11:00 p.m.
Where Did Run Go Wrong? The finale is an illustration of how little the show has managed to communicate what we, the audience, should even be rooting for.
animate this! Yesterday at 10:01 p.m.
Laika Pits Its Stop-motion Creatures Against Each Other In New Fight Challenge As long as no one has to go up against the Other Mother.
overnights Yesterday at 10:00 p.m.
Billions Recap: Home Sweet Home Welcome to the show, Julianna Margulies!
overnights Yesterday at 9:00 p.m.
Snowpiercer Recap: When You Control the Tail, You Control Information As Layton continues his investigation, we learn more about the cruelties the Wilford Co. sees fit to impose on Snowpiercer’s riders.
tiger news Yesterday at 8:48 p.m.
Dakota Johnson Says Grandma Tippi Hedren Still Lives With, Oh, 13 or 14 Big Cats She used to have around sixty, but a baker’s dozen is much more manageable.
spoken word Yesterday at 7:52 p.m.
Lana Del Rey Drops Her New Spoken-Word Piece ‘Patent Leather Do-Over’ As always, shout out to Sylvia Plath.
accio Yesterday at 2:54 p.m.
J.K. Rowling Fact-Checks Some ‘Utter Nonsense’ About Harry Potter’s Origins “I was thinking of putting a section on my website about all the alleged inspirations and birthplaces of Potter.”
coronavirus Yesterday at 1:05 p.m.
All the Celebrities Who Have Tested Positive for the Coronavirus A list that, alas, grows longer every week.
lgbtq Yesterday at 12:16 p.m.
Pixar’s Short Film Out Debuts Studio’s First Gay Lead And it’s streaming now.
overnights Yesterday at 11:35 a.m.
Homecoming Season Finale Recap: The Spotless Mind A reasonably satisfying finish, with some strong De Palma-style theatrics, exposes season two as a slick thrill machine first and foremost.
??? Yesterday at 10:50 a.m.
Hilary Duff Spent Her Holiday Weekend Denying Child-Trafficking Conspiracy “This is actually disgusting.”
obits 5/23/2020 at 10:10 p.m.
Hana Kimura, Pro Wrestler and Terrace House Star, Dead at 22 Her cause of death has not been released.
daytime emmys 5/23/2020 at 8:28 p.m.
The Kelly Clarkson Show and Jeopardy! Among Daytime Emmy Nominees Kellyoke deserves every award.
quarantining 5/23/2020 at 3:34 p.m.
Meanwhile, Here’s David Lynch With the Weather Live from Los Angeles.
now streaming 5/23/2020 at 3:00 p.m.
The 100 Best Movies on Netflix Right Now Groundhog Day, Her, The Matrix, and more.
overnights 5/23/2020 at 2:00 p.m.
Homecoming Recap: Crisis Management Alex knows the jig is up with Walter, and so must shift into a desperate, improvised Phase II.
More Stories