The happy news: After some uncertainty, Martin Scorsese’s The Wolf of Wall Street has been confirmed for its Christmas release date, meaning that it will be eligible for this year’s Oscars. The hmmm, I don’t know about this news: It will be two hours and 45 minutes long. For a certain type of viewer — one like me, who still has nightmares about the supersize 2012 Oscar season, with four movies stretching over the 150-minute mark — this announcement inspired a certain type of panic. Here we go, another year of prestige movies trying to out-serious each other with their long running times. Must we spend all of December in a dark movie theater? Will Oscar movies just keep getting longer forever?

No, actually! Or at least, they are not as long as they were last year, when you look at the forecasted Best Picture race as a whole. Inspired by last week’s ominous long-movie news, Vulture did a survey of the running times for 2013’s presumed Oscar favorites. The Wolf of Wall Street is an outlier this year, as you can see in this handy chart of the running times for our likeliest Best Picture nominees. (A couple of disclaimers: (1) These are based on Vulture’s weekly Oscar Futures and are therefore just predictions. (2) David O. Russell’s American Hustle is not included because a final cut hasn’t been screened yet.) 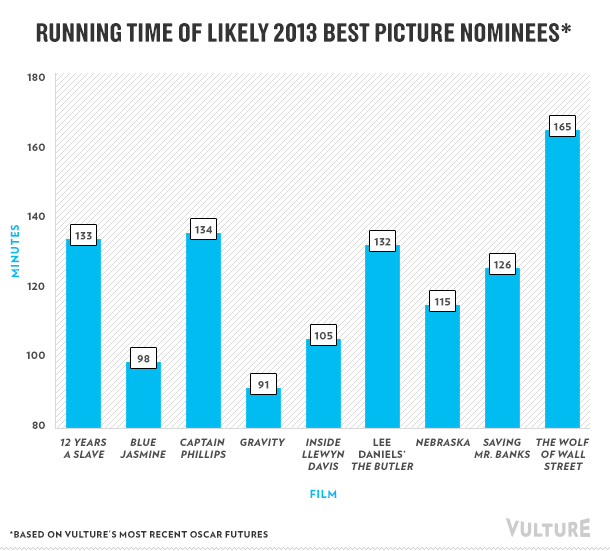 And to put this year in perspective, the average running time is much lower than both 2012 and 2011’s Best Picture nominees. It’s almost exactly two hours! I believe that two hours is how long movies are supposed to be. 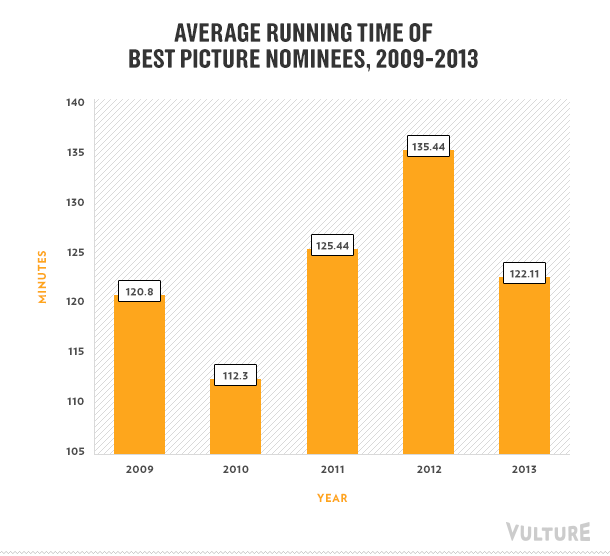 Okay, you’re thinking, but averages don’t really paint the full picture. There’s always one 90-minute masterpiece like Gravity to balance out the five Django Unchaineds or whatever. Fair point. Here is a graph of the longest three nominees from the last five years (since the Academy switched to an up-to-ten-movie Best Picture category.) 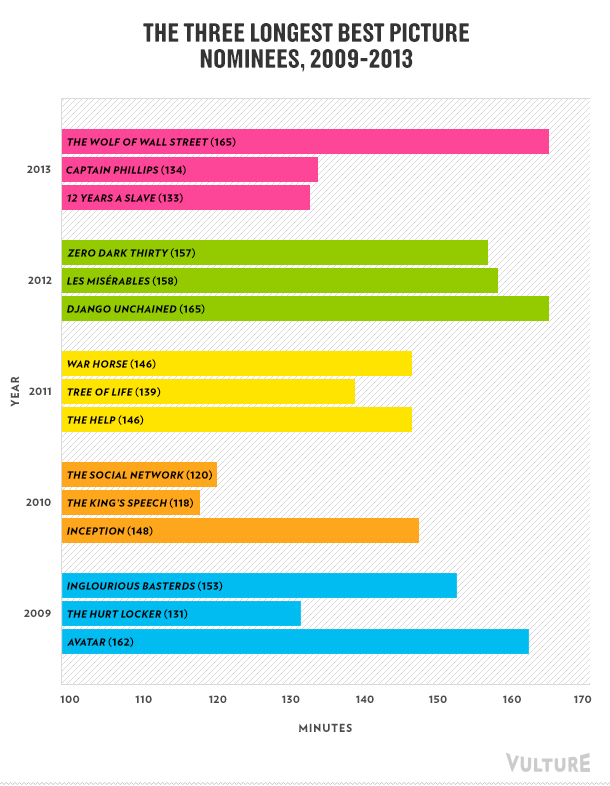 If you discount Wolf of Wall Street, we’re basically in 2010 right now. It’s just one incredibly long Oscar movie this year! With at least twenty minutes of lobster-throwing, I assume. (You can’t be mad at lobster-throwing.) So have faith, fellow fidgety viewers. We can do it. We will make it through this Oscar season.

+Comments Leave a Comment
Oscar Movies Are Getting Shorter, Sort Of