When this week’s Parenthood episode ended, I was teary and frustrated by a few things, but mostly satisfied. What does that make me? Tearstratisfied? Satistearated? Actually, I think we’ve met our quota on hybrid words by referring to these weekly Parenthood analyses as cry-caps. So let’s agree that, overall, this was one of the stronger episodes of this uneven season, then talk frustrations, satisfying story lines and, finally, cries.

The Amber-Ryan relationship has reached a repetitive point of ring-return-policy irritation. Personally, I’m fatigued by the constant “Are you mad at me?” conversations and the way that their seemingly unavoidable breakup keeps getting dragged out week … after week … after week. Which is why, much as I didn’t want to see Ryan in jail, I was sort of relieved to witness his unwarranted beatdown of the drummer from Ashes of Rome and his subsequent arrest. Maybe now at least the narrative of this relationship can move into new territory. Parenthood did a great job last season of exploring the difficulties Ryan faced as he transitioned from serving in Afghanistan back to “regular” life. I’d love to see the show continue exploring that terrain, especially now that we know he still has anxiety issues. Watching him buy way too much kung pao and get pissed when Amber’s not there to eat it is just not working.

In other breaking Braverman news, Crosby did approximately 70 ridiculous things this week. He failed to register to vote and therefore couldn’t vote for Kristina. He somehow did not even realize he needed to register before Election Day. He convinced Jabbar that a U.S. citizen can vote simply by raising his right hand and shouting the name of his candidate of choice, which may be how things worked in Florida during the 2000 presidential election but certainly would not fly in a 2013 mayoral race in Berkeley, California. He lied to Jasmine about voting for Barack Obama. (Yes, we can! But no, Crosby didn’t!) And he paid some random guy $40 to cast a ballot for Kristina. Thank god, she lost. If she’d won, there would have been an immediate political scandal about her unregistered brother-in-law buying votes. Then again, a Kristina mayoral scandal might have been worth it just to watch the fights Dax Shepard and Peter Krause would have gotten into during the debacle. (Shout-out to Vulture commenter Jayeff, who noted on last week’s recap, “The rapport between Adam and Crosby is delightful. I could watch these two give each other shit forever.” Could not agree more.)

And speaking of that rapport, let’s move on to the things that I found satisfying. While it’s completely absurd that Crosby referred to himself as “an honorary black person” — Crosby, you simply married a black woman, which makes you honorarily neither black nor female — I loved the way he busted on Adam for being the ultimate Caucasian. Crosby’s comments on this subject have been summarized via the following infographic:

In terms of the election results, it felt completely right that Kristina lost the election to Bob Little. She was running with serious odds against her, and it would have been excessive for two Bravermans (Kristina and Max) to win their respective elections in back-to-back seasons. The point of that Kristina arc was to demonstrate that she’s fully re-embracing life again. Mission accomplished.

I also enjoyed the new layer of photography-mentor-mentee bonding that occurred between Hank and Max, who asked Hank’s surly daughter Ruby to be his girlfriend, which was never going to happen because … Max and Ruby? Ruby and Max? Still, it’s a good thing Max pursued her because it led to Hank imparting this insightful piece of advice, which Max will undoubtedly carry with him always: “It’s about feeling stuff … like, on the inside.”

Now, before we cover the weeps and verklempts, we need to talk Julia and Joel. In last week’s cry-cap, I noted that they really need to get divorced in order to raise the emotional stakes in this show. Some Vulture commenters responded to this suggestion by saying — and I’m paraphrasing here — “How could you suggest that Joel and Julia need to get divorced?? They can work it out. You monster!” Others noted that it still feels too soon for them to get separated because their marital issues have developed in such a rapid and awkward manner this season.

I agree that this plotline has been clunkily handled at many points. But in this week’s episode, most notably during that big blow-up of an argument on Election Night, the Parenthood writers made it clear that even though the issues between these two may now be bubbling over, they’ve been on low-to-medium simmer for a long time. The challenges brought on by adopting Victor certainly have caused some rifts between them, even before the whole debate about whether to send him back to fourth grade. But the tougher issue is a much deeper one. Joel has never felt that Julia supports his career, or even takes it seriously, which is why her intrusion into his meeting with Peet was so impossible for him to forgive. Essentially, he feels that he does not have her respect.

“I championed you for nine years,” he told his wife, referring to his time as a stay-at-home dad. “And you can’t give me three months.” Sam Jaeger was just heartbreaking in that scene.

Joel’s right, and he’s right to feel hurt and unsupported. The problem is, so is Julia (although not about the barging into Joel’s office and yelling at Peet thing; that was just wrong.) Julia is a devoted mother who is not built to be a stay-at-home mom. It’s not in her DNA, it’s not who she is, and until she goes back to work, she’s not going to feel stable. She needs someone who can understand the sense of failure and isolation she currently feels and she simply can’t get that empathy from Joel because he did her job without experiencing nearly as much angst. They’re at an impasse, and that’s when marriages disintegrate. All signs suggest that Julia and Joel are indeed disintegrating

Before we start to cry about this, let’s quickly run down the cries from this episode:

Adam tells Kristina he’s proud of her. Just before Kristina and Adam pulled the lever to cast their mayoral votes, Adam took a moment to say: “Win or lose, Kristina, I’m so proud of you.” You pretty much knew at that point that Kristina was going to lose, but it was still sweet and heartwarming. Apparently I’m a sucker for America’s Favorite White Guy saying nice things to his wife. Cry factor (on a scale of one tear to five): 2.

Gwen, Kristina’s friend with cancer, shows up to vote. That woman doesn’t even have to speak. Every time I see her with her kind eyes and her head wrapped in a turban, forget it: gone. Monica Potter’s amazing cry face only exacerbated the wet-eye factor. Cry factor: 3.

Zeek finds a weeping Amber at the police station. This moment got to me for a couple of reasons. One: seeing Zeek comfort Amber made me flashback to the tough-love pep talk he gave to her back in season two, after she got in that car crash. He was the ideal person to be there for her in that moment. Two: Mae Whitman brought the cry noise and brought it hard. (I mean, for God’s sake, look at them below.) Cry factor: 3. 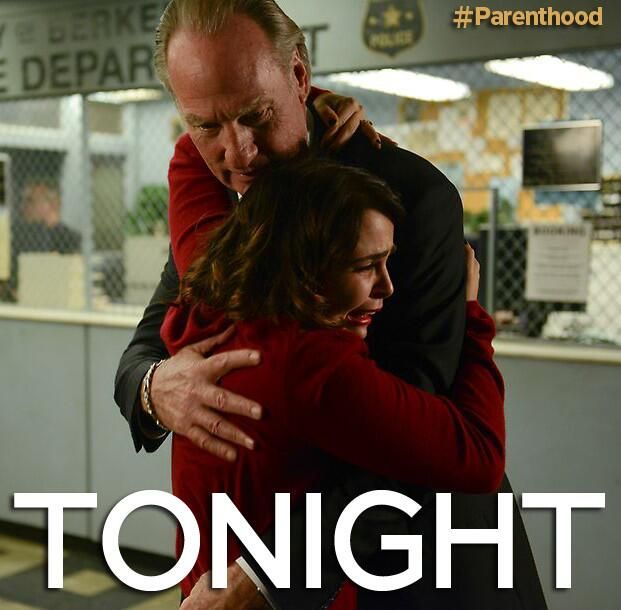 Kristina’s concession speech and talk with Emma. First, Kristina made a concession speech in which she acknowledged that she almost died. Then Emma, daughter of the woman who asked that poignant question during the mayoral debate, showed up to thank Kristina for changing her life. It was obvious that, at that point, Parenthood was campaigning aggressively for our cries like Kristina Braverman kissing babies and passing out her cell-phone number. It was heavy-handed, and corny, and blatantly tear-jerky. But effective. Dammit, Parenthood. Very, very effective. Cry factor: 4.