Between the reckless IRA and the vengeful Chinese, Jax hardly has time to deal with his problems at home. But everyone is armed to the teeth in this episode, even the mothers and the grandmothers. Every last bridge collapses in smoke around Tara and she’s all out of options. Will she make it through this season? Will Clay? The only thing I do know is that nothing’s going to touch Gemma. That woman is made of teflon. Here’s what we learned last night on Sons of Anarchy.

Everyone Loves a Pun, Even Deeply Violent Gun-Running Bikers
For an episode that picks up right where we left off (Tara armed and fearing for her life), the week’s Sons started out on a light-hearted note with this surprising bit of wordplay from the boys as they work on rebuilding the bombed-out MC. This show is at its very best when it can find the mix between fun and gut-churning violence (as it did a few weeks ago when Jax and the boys gleefully took on those dirty Eden cops). But we’re in the final stretch of a bleak season and the jokes are going to be few and far between. So gather ye “our prices are da bomb” signs where ye may. 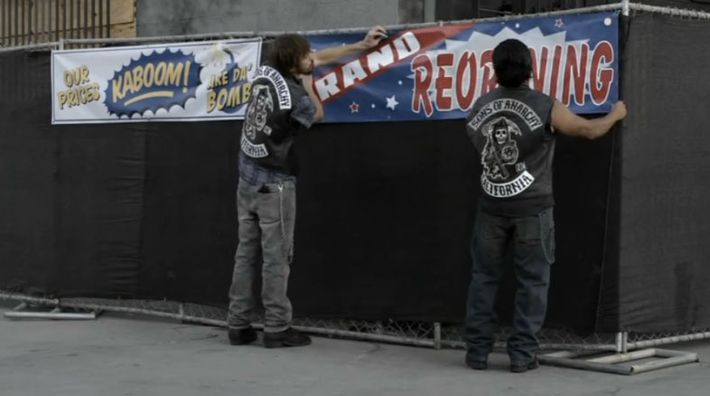 One Last Job
Because Clay’s trial has been moved up, he needs to be busted out of prison now and the only men available for the job are the extremely unwilling Sons. Jax is almost out of the game and working so hard to clean up his life and tie up loose ends that it’s possible he could come out the other side of this clean. But the guys keep dropping too many “one last job” phrases. Chibs, don’t you know that when you say “the door’s almost closed, Jackie,” you’re basically signing someone’s death warrant? 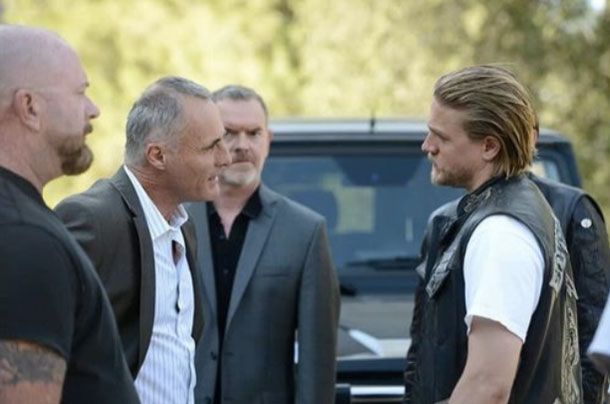 The Loose Juice Cannon
And I don’t know which of the Sons is going to die or what way this is all going to go terribly, but I’d be very surprised if Juice wasn’t somehow involved in things going south. They’ve been dropping hints all season about his mental state and Theo Rossi is either killing it or giving me unintentionally deranged signals. I was petrified when he volunteered for Tara duty. If anyone was going to snap and hurt Dr. Knowles, it was going to be the man who icily smothered a woman to death a few episodes ago. For now, the only damage he did was happily send Tara to discover Jax and Collette, but I’m sure he’s capable of much worse. Unrelated, but when Tara went to the hospital she, in full Lady Macbeth mode, stared moodily at the bloodstain on the carpet. What kind of hospital is this that they haven’t cleaned up that floor yet? That’s downright unhygienic. 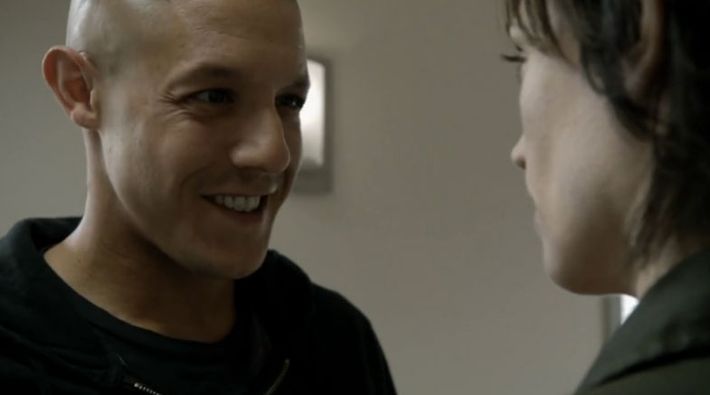 The Gun and Pony Show
Galen. Jaysus. As Jimmy Cucuzza says once the dusts clears and the dead Chinese gangster is in the trunk, he was never going to go with the Chinks. Galen’s shows of force are coming off as less impressively brutal and calculated and more reckless and stupid. It makes you wonder what the Irish Kings would think of his actions here and if Jax can use that to turn them against Galen. Even Connor seems done. 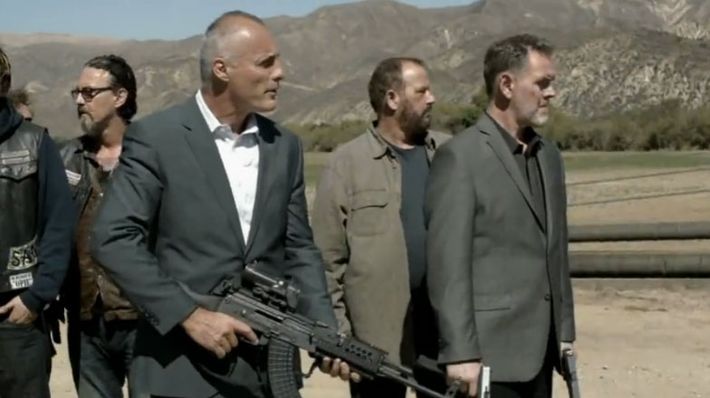 The Old Lady Coach
Speaking of shows of force, Gemma had her own “gun down the competition” moment with Tara in the Teller foyer. Gemma was absolutely right when she told Tara she had burned all her bridges, but was she right in saying the boys wouldn’t be raised by their mother? Isn’t this an echo of what we heard Gemma say to Wendy in the pilot? I think we’re meant to have some respect for Gemma here, but I find her hypocrisy completely unbearable. Saying that Tara crossed a line in faking the death of a baby? A line Gemma would never cross? Does no one remember that Gemma held a gun to an actual baby when she was trying to track down Abel? What’s a little bag of blood between gangsters? Gemma might be right about Jax, that he loves deep and hates deeper, but I’m not sure she has his number when it comes to Tara. As for Tara, well, I admire her standing up to Gemma and calling her out, but I found myself wishing she had it in her to be just a little bit stronger. She showed weakness and that’s all Gemma needs. 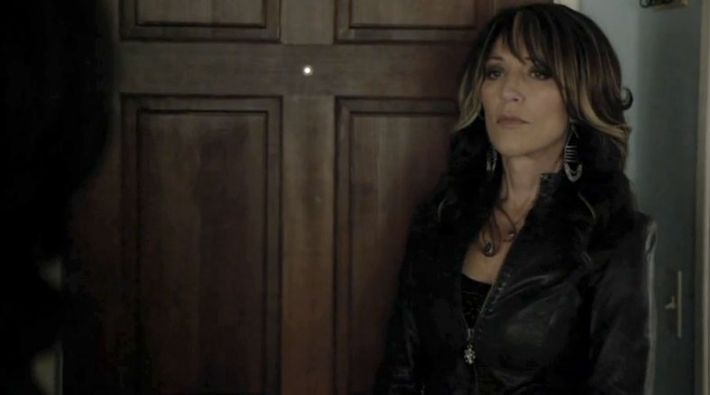 A Divorce of Sorts
Gemma’s weakness, of course, is Clay, who grants her a divorce of sorts when he signs the house and the MC over to her in anticipation of going off the grid. What do we think, is Clay going to make it out of this thing alive? Is Ron Perlman still going to be on the show? He’s been so sidelined this year I can see the show going on without him. There’s really no room for a Clay redemption in this world. 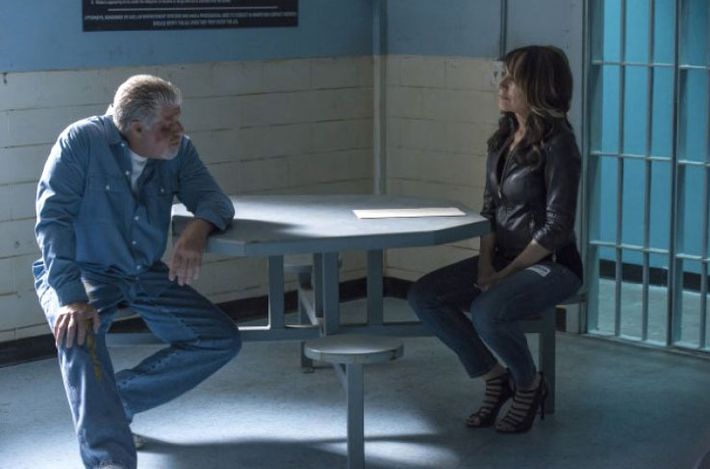 Losing the Balance
Just as Jax feared the fallout from Galen’s actions resulted in pressure from the Chinese. They want sole control of the gun trade in Northern California. Will Jax be able to make that happen or is he setting them up to go down with Galen? I’d like to think that it’s Jax’s preference to eliminate as much of the gun trade as possible. His remorseful visit to the school in the opening of the episode would indicate that’s the case. But is it practical? 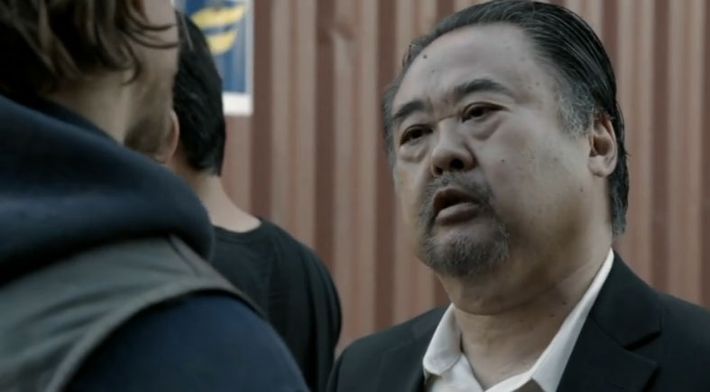 Wayne and Nero Spinoff, Please
Remember earlier when I said we’d have to take our humor where we could? This C-Plot of Nero and Wayne getting to know each other is the best we’re going to do. And it was great. Every week Jimmy Smits is working his way deeper into my heart. Nero is such a fantastic character and Smits plays him with such ease and charm. This also gave Wayne something to do. The show sometimes struggles to shoehorn him into the main plot. So they boys got to rescue Wendy and crack wise. Delightful. 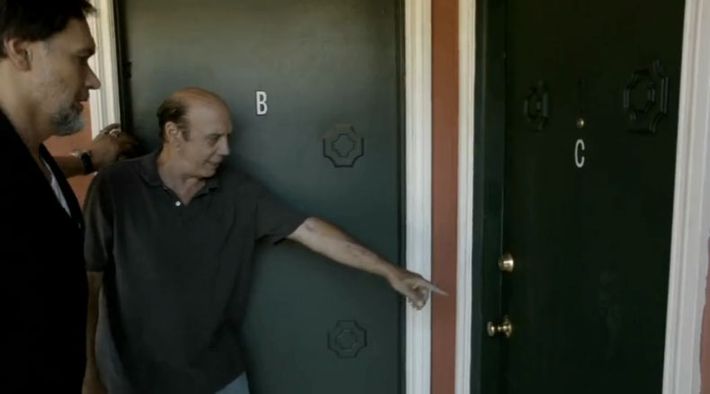 Look What You Did to Me
Whether or not you think it’s justified, Tara was extremely hurt to find Jax in bed with Collette. I wonder how much worse she would feel if she knew when he started “dipping into that,” as his mother put it. But is Tara justified in putting the larger blame on Jax here? Absolutely she is. Though she’s an adult who made her own choices, you can’t deny the corrosive effect her involvement with the club has had on her life. Her hand? Jax’s fault. The jail time she’s facing? That’s because she was trying to help the club. Jax has consistently drawn her into his world and though she’s gone willingly, he has to share in the responsibility for how terrible everything has become. And I think Jax sees that. I think the end of this episode has the guilt weighing heavily on him. Gemma might believe he’s done, but I’d like to think better of him. 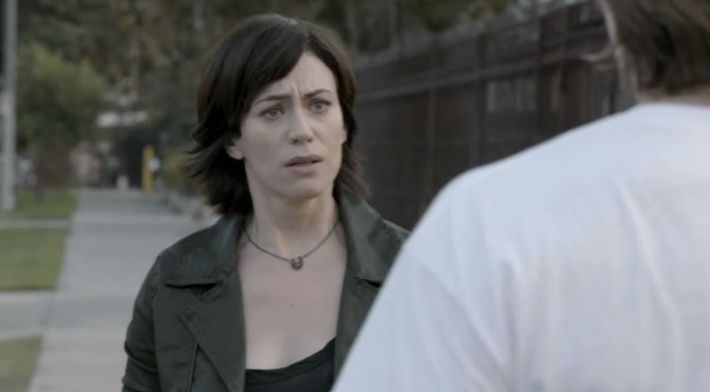 Rip Your Tits Off Rehab
If you want further evidence of the damaging influence of the MC, you need look no further than Wendy. No amount of “Hazelden hindsight” can save her from her guilt and even Gemma feels that burden. But she can extend sympathy to Wendy because Wendy’s not a threat to Gemma’s position as Queen Mother. Tara, on the other hand, gets left out in the cold. There was an interesting parallel here between Gemma putting Wendy to bed next to that toy and Jax putting Abel to bed underneath childish paintings of motorcycles. They start the boys so young in this culture. 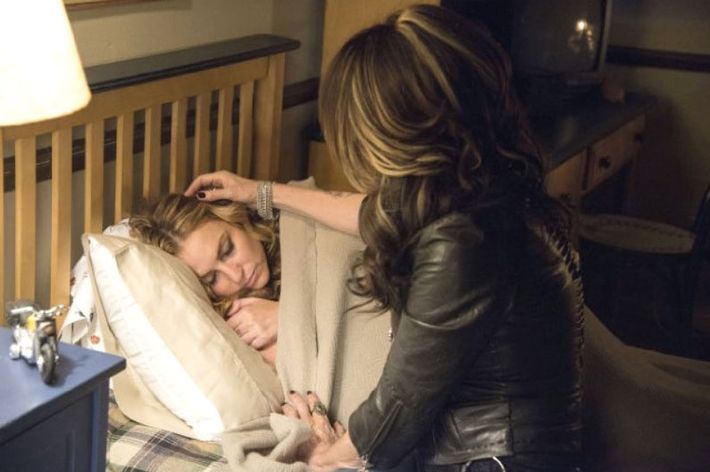 Burning the Last Bridge
Of all the stupid things Tara has done this season (trusting Wendy, trusting Wayne), this was by far the stupidest. Why couldn’t she say to D.A. Patterson (who showed her true colors in turning her back on Tara) something along the lines of “yes I am in danger, please help me.” She was willing to go in and turn on Jax, but she’s unwilling to simply ask for help? What was the motivation there? Many folks have theorized that if this is a modern-day Hamlet then Tara is singing her suicidal Ophelia swan song here. I don’t know. I’d like to believe she has a little fight left. 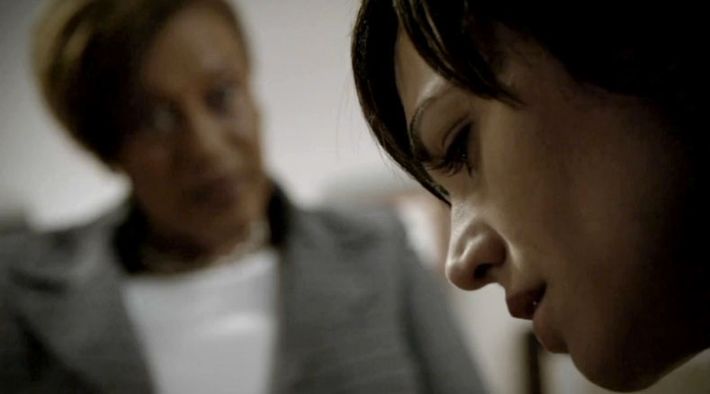 Let’s end on a Happier note, shall we? 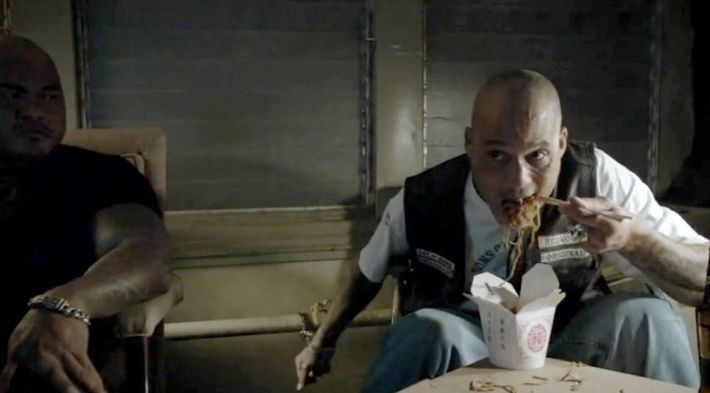 grammys 2023 7 mins ago
Dee Barnes Thinks It’s a Choice to Name Grammy Award After Dr. Dre “They named this award after an abuser … you might as well call it the ‘Ike Turner Award.’”
yawn solo 5:33 p.m.
Harrison Ford Isn’t Anxious. You’re Just Boring. In a searingly honest confessional, the 80-year-old actor came out … as not having social anxiety.
coming soon 4:40 p.m.
Owen Wilson Is (But Isn’t) Bob Ross in Paint If it looks like Bob Ross, walks like Bob Ross, and paints like Bob Ross, it’s Owen Wilson in the Paint trailer.
trailer mix 3:36 p.m.
Hungry Guys Will Be Treated to Some Movie Trailers at the Super Bowl No time for Totino’s when the Scream VI trailer is premiering
explainers 3:10 p.m.
What the Great Netflix Password Crackdown Means for You Let’s talk about it.
vulture lists 2:00 p.m.
15 Great Valentine’s Day TV Episodes You Can Stream Right Now Parks and Rec, New Girl, Friends, and more.
america has a problem 1:35 p.m.
The Beyhive Slashed Its Ivy Park Budget by 50 Percent New reports suggest people were saving for Beyoncé tickets instead of buying her streetwear.
you are getting sleepy 1:00 p.m.
Joe Pera, the Sleep King Talking to the comedian and his collaborator Ryan Dann about their new podcast, writing songs, and being slow.
improv 12:47 p.m.
Colin Mochrie Reflects on Over 30 Years of Whose Line Is It Anyway? “The short answer is, as of now, this is the last season with this cast.”
By Caitlin Wolper
vulture 10x10 12:12 p.m.
The Louboutin Puzzle 30-Across, Five Letters: Movie with Space Jockeys
hbo axe'd 12:05 p.m.
Looks Like Discovery+ Doesn’t Need HBO Max After All The combined service is still coming, but one streamer gets to stand apart.
ftw 11:35 a.m.
The Late Late Show to Be Replaced by Reboot of @midnight Stephen Colbert will executive-produce a reboot of the Comedy Central game show.
househusbands 11:24 a.m.
The Types of Men You Find on Real Housewives In the Bravo-verse, the men have their own special status.
what happened here 10:36 a.m.
A Breakdown of Armie Hammer Allegations, Controversies, and Time-share Drama Elizabeth Chambers says she learned about the allegations against her estranged husband as the public did.
buyer & bookseller 10:10 a.m.
Barbra Streisand Will (Yen)Tell Us About Her Life In My Name Is Barbra, her 1,040-page memoir.
exit interview 8:00 a.m.
Steven Soderbergh Can’t Quit Magic Mike He says there was “no compelling reason” to make a third movie, and then Channing Tatum’s live show happened.
By Matt Zoller Seitz
overnights 6:01 a.m.
The Bad Batch Recap: City of Walls and Secrets The Bad Batch’s two-part political thriller ranks up there with some of the best The Clone Wars ever did.
music feuds 2:12 a.m.
Pink Floyd Continues to Battle Over the Russian Invasion of Ukraine Roger Waters is accused of being antisemitic and pro-Putin by his bandmates.
overnights Yesterday at 10:45 p.m.
The Real Housewives of New Jersey Season-Premiere Recap: New Dogs, Old Tricks New Jersey is back with all its old beefs and maybe a new curse?
vulture sports Yesterday at 9:40 p.m.
Super Bowl LVII Commercials Kick Off Early The real main event.
More Stories