Although most people have not yet exploded, the threat remains a very real and terrifying possibility for us all. Unlike most other leading causes of death, exploding has a nearly 100 percent fatality rate. Modern medicine has made great strides over the years, sure, but let’s be real: Doctors still aren’t even close to being able to save somebody’s life after he or she has exploded. So, in light of these startling statistics, it’s frankly about time this issue received more awareness in mainstream pop culture, and thankfully, this week Supernatural dealt with the issue head-on. Before you protest that some issues are TOO serious to explore on a CW paranormal procedural-serial hybrid, please be assured that “Heaven Can’t Wait” was the most tasteful portrayal of human explosion in recent memory. No, but really and for real now: This episode was borderline profound in the way it paired a gruesome demise with subtly devastating pathos. As Supernatural taught us this week, sometimes in order to truly explore the human condition, that human must explode. 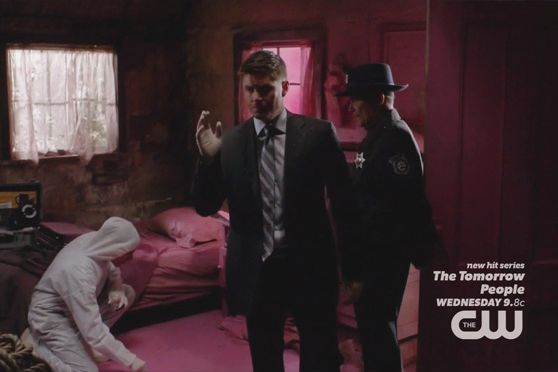 You guessed it: Another rogue angel posed the primary threat in “Heaven Can’t Wait,” this time an angel whose role in Heaven had been clearing battlefields of fallen brethren by vaporizing them painlessly. Continuing his role as mercy killer in a realm where 100 percent of creation feels some degree of pain at all times, this literal angel of death had begun knocking off various depressives and sad-sacks, exploding them with a single touch and leaving behind huge swathes of pink residue. Um, first of all, how amazing was this concept?  I’m not convinced that the entirety of a human body, when vaporized, would mix together to form hot pink, but that’s okay. Contrasting such a brutal demise with a fun, bright color was a wildly original and affecting image. Even more compelling, the concept of an angel bringing carnage upon innocents continued to prove just how inspired season nine’s angel-themed threat has been. The only thing more terrifying than a creature who murders with malice is one who murders out of misguided kindness. In that case, you don’t even get the consolation of hating your killer. Very frustrating! At least be loathsome when you murder me, jeez. It’s the least you can do. (Besides NOT murdering me.) 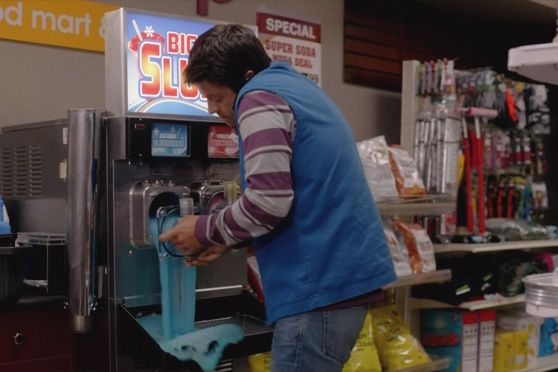 Unfortunately, for anyone feeling even remotely bummed, this Ephraim rascal saw no distinction between suicidal despair and minor heartbreak; to him all pain was pain and he desired nothing less than the complete eradication of bad feelings the world over. Which, okay, it’s the thought that counts. But that put Castiel in imminent danger. After Dean had kicked him out of the Men of Letters bunker he’d found a job as a gas station mini-mart employee (name tag: Steve!), and he’d been fighting off the I-ruined-heaven blues by diligently stocking shelves and sleeping in the storage room and forming romantic feelings for his supervisor. This last part begat one of the series’ most heartbreaking moments ever when Castiel misinterpreted her inquiries for him to babysit as an invitation to go out on a date, only to realize his mistake after arriving on her doorstep with one sad rose hidden behind his back. Later, when left alone with a crying baby, he calmed the child with an a cappella rendition of “Believe It or Not” before commiserating with her about how scary and sad sudden existence can seem. At this point, if you hadn’t already physically exploded, then at least your heart did (metaphorically).

So far this season’s struck major gold in exploring Castiel’s adjustment to normal human existence, but for the most part, that exploration has been relegated to slapstick and observational humor. Which, no complaint: Misha Collins has a particular skill for stone-faced confusion. But this episode nicely delved into the deeper, more existential parts of Castiel’s journey; not only has he begun to know the vast spectrum of human emotion (including pain), his growing appreciation for romance and companionship has been incredibly moving. By now, Supernatural knows that simple moments like Dean giving Castiel brotherly advice before a first date somehow packs as much of an emotional punch as brutally killing off another random female love interest. Even the episode’s concluding moments — Castiel a.k.a. Steve opening the mini-mart — had a quiet, creeping sadness about them. No explosions, no murders, no sudden shocks or twists. Just a man looking to the horizon with ambivalence about his life. Seriously lovely. 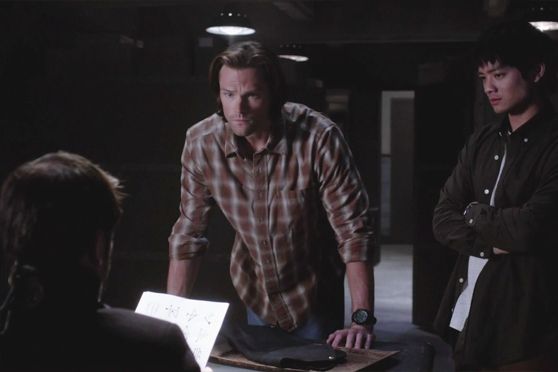 Meanwhile in mythology territory, Sam remained in the bunker with Kevin (Dean didn’t want Sam tagging along on the hunt and risk exposing Ezekiel to Castiel) where they enlisted Crowley to help decipher a crucial part of the angel tablet. The usual amount of Crowley-growling occurred, but in exchange for his help the dudes allowed him to place a “phone call” via a bowl of blood. After hilariously being placed on hold, he eventually reached Abaddon so that he could yell at her about whatever it was she was up to in hell. As it turned out, she’d been breaking all of his contracts and stealing souls prematurely. What a jerk! Crowley finally did help Sam read the tablet, but the translation only contained bad news: The angel-expulsion spell Metatron had used was irreversible. Okay, then! So, not much came of this plotline other than the sheer pleasure of witnessing Crowley and Abaddon bicker. But there seems to be a growing possibility that the Winchesters may eventually have to work alongside Crowley (and possibly Abaddon) to bring down all these angel jerks. (Or rather, bring them up?) Predictions aside, though, the episode closed with the image of Crowley secretly using a stolen syringe to enact some kind of blood ritual, so  it appears his stay in the bunker probably won’t last too much longer. Which is fine. He’s too fun a character to be chained to a table for an entire season growling at everybody. 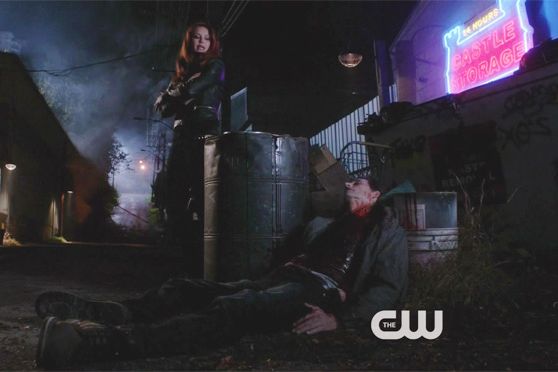 Supernatural can be a polarizing show, often veering between super serious and straight-up wacky. “Heaven Can Wait” fell squarely in the middle, but in a way that made last week’s talking-animal episode seem even less essential. See, episodes CAN be funny without undercutting tension or emotional depth or murdering your brain cells. Here’s hoping the next time this show features talking animals, they’ll explode too. Now, THAT’s an episode I could get behind.