Nope. Sorry. Talking animals are not funny; they are a nightmare. The only thing less funny than a talking animal is a talking baby. Both things should be thrown directly into the ocean. Get out of here, you sub-intelligent trash. You don’t know me. You don’t know English. Your brains are far too small to have opinions about pop culture let alone the ability to sass a grown man. ENOUGH. Be quiet, all of you.

Well, it was fun while it lasted. Supernatural held off on featuring talking animals for 176 episodes, which I guess is commendable. In my opinion, 176 straight episodes is a very good run when it comes to excluding talking animals. Unfortunately, this was the sad week in which Supernatural finally went there. Call it a statistical inevitability, call it a creative tragedy, but animals spoke in “Dog Dean Afternoon” and it was the comedy equivalent of wet-dog smell. Just a dirty embarrassment. Plus, I think I hate animals now? 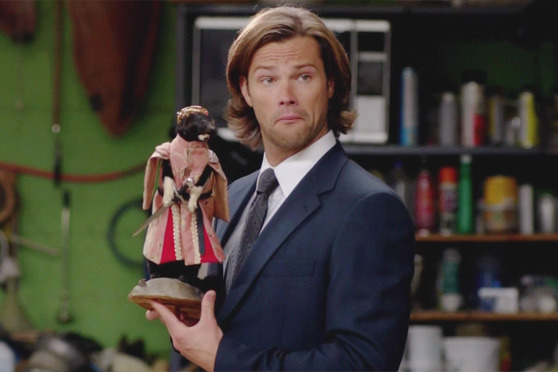 Somebody has to say it. After more than eight seasons of invasive monsters, infectious diseases, and venomous parasites, one creature has proved far more toxic than anything the Winchesters have ever faced: bad comedy. In the world of Supernatural, Bad Comedy is the unofficial and longest-reigning Big Bad. Allegedly humorous episodes pop up often enough to be considered integral to the series as a whole, but they are always about 60 percent less funny than the writers think and about 100 percent less compelling. But for some reason, the same minds behind some truly inventive and suspenseful drama seem to think they can write comedy also. They can’t. THEY TRY. Oh, do they try. But let’s be real, the failure rate of Supernatural comedy episodes is extraordinarily high. Like, so high.

First of all, the jokes are usually just plain tired. (“Tough crowd,” Dean said at one point in this episode, a phrase that has perhaps never been funny and now functions as the dead canary in the mineshaft of hackery.) Meanwhile these episodes are predicated on the belief that Jensen Ackles is a gift to comic timing, but he’s only hilarious inasmuch as a knock-knock joke will seem hilarious if your insanely hot crush is the one who tells it. The strength of Ackles’s performances has always been how inherently over-the-top he is without the jokes. Just his line readings are funny enough, providing just the slightest bit of levity amid frequently dark storytelling. But watching him ham it up and point guns at pigeons feels like eating frosting for dessert. Yes, that’s something I do from time to time, but I almost always regret it. Yet I never learn. Neither, apparently, does Supernatural. 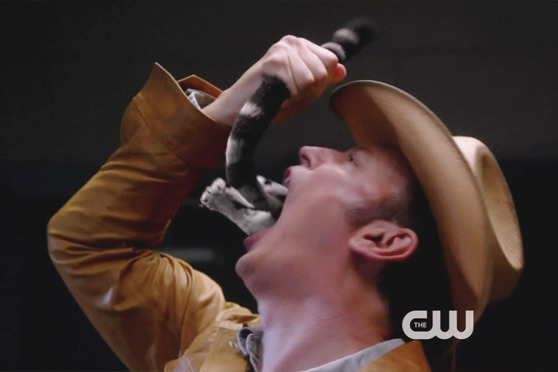 Worse, Supernatural’s forays into broad comedy always undermine those episodes’ main threats and therefore any suspense. This episode saw a slightly interesting concept — a man who adopts the strengths of various animals by ingesting their organs — completely collapse when it devoted way, way too much time to a supremely dumb talking-animal element. After Dean drank an Eskimo-derived potion that would help him question the German Shepherd that had witnessed a murder, he not only developed the ability to speak to dogs, pigeons, and mice, he also began exhibiting doglike behaviors. Yelling at mailmen, sticking his head out of the car window, retrieving objects Sam had thrown. Which, fine, that’s cute enough, I guess. But the animals all had these terrible, terrible cartoon voices. The German Shepherd spoke like a wiseguy, with all the attendant strong opinions about pop culture and jokes about sniffing butts. The worst was a flamboyantly gay terrier who openly lusted after Sam and used the phrase “Bitch, please” to Dean. (That terrier was voiced by Leslie Jordan, who, after last week’s appearance as a flamboyant warlock on American Horror Story, is forging a nice late-career renaissance as a queeny object of ridicule.) And what exactly were we supposed to do during that scene when Dean gazed longingly at a female poodle? Laugh? Get horny? It’s not that bestiality is too inappropriate to make jokes about, but it just didn’t make sense. The ability to speak to animals makes you sexually attracted to them? Why didn’t he get horny for the pigeon or mice also? But yeah, by the time these segments mercifully ended, there was no reason to care about what the villain was up to. (Cooking, basically. That was it.) But even the villain didn’t really make sense; how exactly did his chameleonic abilities cause his clothes to change color also? Guys, it’s like I don’t understand ANYTHING sometimes. 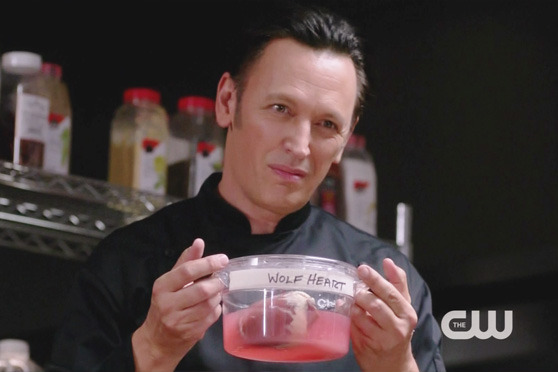 We all know how the average episode of Supernatural is structured: In Act Five, both boys become incapacitated by the villain and it looks like they’re about to bite it, only to have some third party bust in and save them. Like, I get it, that’s drama. But in episodes like this it’s especially frustrating to see these two very strong, seasoned warriors almost get killed by the lamest villain possible. At one point he just sort of slapped the gun out of Dean’s hand and immediately tied his hands to a post. The dude had stage-four cancer! And Dean is Dean! I don’t care if the villain had the super-speed of a chimp or whatever damn animal he’d just eaten. The Winchesters have been at this for so long that it’s outrageous to see them be so bad at their jobs sometimes. Also, was Dean still part dog or wasn’t he? Wouldn’t that be an advantage in a fight? A little more internal consistency could have worked wonders, but that’s probably too much to ask when an episode would rather devote a full three minutes to a shitting pigeon. I think it was supposed to be heartwarming when a pack of domesticated dogs (the ones Dean had freed from the shelter) arrived and ripped the villain to shreds, but if a pack of domesticated dogs did that in a different episode, the Winchesters would have put those dogs DOWN. Even here I held out hope the bros would still do that, if only because at least according to this episode, dogs have far worse personalities than we knew. Bunch of horny jerks. 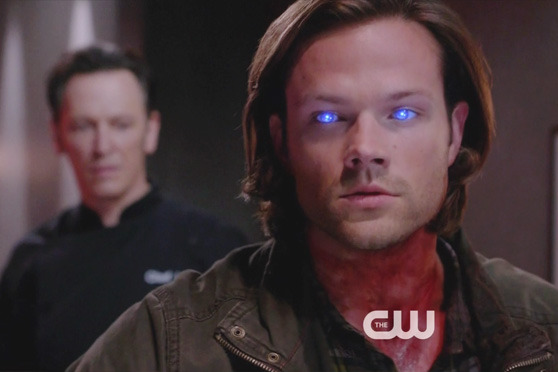 It wasn’t all bad though. Mixed in with the talking animal nightmare scenario were a handful of good moments. I liked the part where Ezekiel popped up to fix Sam’s neck wound only to immediately peace out. I also liked the part where Sam and Dean were both wearing plaid shirts, that was nice. Also the boys stayed in a tacky motel again, just like old times. So make no mistake, there were three things that I liked about this episode. 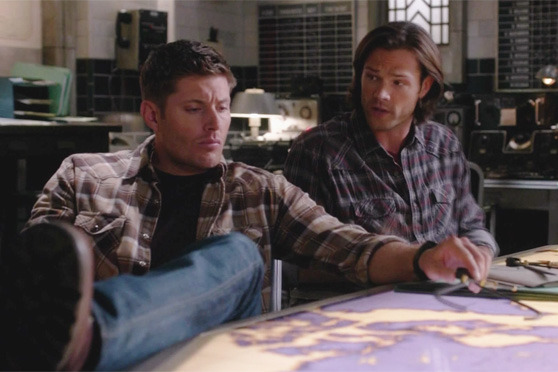 I get it, nothing is more subjective than comedy. That’s because nobody can really define what’s funny; the part of our brains that tells us to laugh at something is the weirdest and most mysterious part. But like phobias or obsessions or romantic attraction or our desire to eat frosting for dinner, our senses of humor are as powerful as they are unexplainable. For inexplicable reasons, we love some things and are repulsed by others. Bad comedy is the latter for me. Nothing is worse. Bad comedy makes my skin crawl! Bad horror, bad drama, bad romance: I can handle those and even occasionally seek them out. But bad comedy is the most toxic form of entertainment. That’s why the Transformers movies are so bad: Yes, they are boring and make no visual sense whatsoever, but it’s the bad jokes that truly ruin everything. Same thing with this episode. At some point it stopped mattering whether there were any good things to say about “Dog Dean Afternoon,” because the talking animals were so overpoweringly terrible. Maybe you loved it. Fair enough! But not me. Nope. Not funny. Bad dog.

overnights 10:00 p.m.
One Day at a Time Recap: Another Happy Ending Sometimes zero boundaries can be a good thing — as long as Penelope puts a lock on her bedroom door going forward, that is.
overnights 10:00 p.m.
Vanderpump Rules Recap: Social Engagement Kristen is far from a perfect person, but she deserves something more than avoidance from her two best friends.
coronavirus 9:00 p.m.
All the Live Events, Movie Releases, and Productions Affected by the Coronavirus A long list of broken dreams.
overnights 8:32 p.m.
Schitt’s Creek Series Finale Recap: Simply the Best David and Patrick’s dream wedding may not be what they planned, but it’s the happy ending they (and we) deserve.
set visits 8:32 p.m.
Leaving Schitt’s Creek On set with the Roses, in a place that existed outside of any world, where people became better versions of themselves.
By Kathryn VanArendonk
a very special guest 6:56 p.m.
You Simply Must Stay To The End of This Phoebe Waller-Bridge Video About Fleabag Maybe things really will be all right.
coronavirus 4:59 p.m.
Here Are All the Movies Delayed Because of Coronavirus With updated release dates where available.
snl 4:40 p.m.
These Are the SNL Episodes We Wish Were Airing Right Now SNL writer Steven Castillo should be the show’s new booker.
quarantuning 4:06 p.m.
Watch These Livestreamed Concerts During Your Social Distancing DJ D-Nice, Miley Cyrus, Ben Gibbard and a lot of Diplo.
By Justin Curto
character study 3:00 p.m.
How Moira Rose Became Schitt’s Most Lovable Diva Making the former soap star, current Jazzagal, and indefatigable matriarch of the Rose clan.
By Jessica Goldstein
now streaming 3:00 p.m.
The 100 Best Movies on Amazon Prime Right Now Moonstruck, The Farewell, A Simple Favor, and more.
vulture quizzes 2:55 p.m.
How Well Do You Know Tiger King From We Bought a Zoo? Can you tell a Netflix true-crime docuseries from a 2011 movie about a family-owned zoo? Take this quiz to find out.
coronavirus 2:02 p.m.
CBS Is Bringing Back Its Sunday Night Movie Franchise Starting with Raiders of the Lost Ark.
read a book 2:00 p.m.
Join Samantha Irby for a Live Reading of Wow, No Thank You. Followed by a chat with Angelica Jade Bastién, tonight on Vulture’s Instagram Live.
true crime 1:38 p.m.
The Last Podcast on the Left Hosts Break Down the Art of True-Crime Comedy “We defang them, we stare in their faces, we laugh at how pathetic they are.”
comedy 1:31 p.m.
The Unlikely Rise of Schitt’s Creek Schitt doesn’t just happen overnight. Here’s how the cult comedy transformed into a Peak TV success story.
By Josef Adalian
#releasethebuttholecut 12:55 p.m.
New Evidence Suggests the Cats ‘Butthole Cut’ Is Real Can you say of your butt that it’s worse than your bark?
tv review 12:51 p.m.
Run Is a Next-Level Escapist Fantasy A spontaneous cross-country journey with Merritt Wever and Domhnall Gleeson? In this climate? Yes, please.
the law 12:24 p.m.
R. Kelly Won’t Be Getting Out of Jail Because of the Coronavirus He’ll just have to keep on social distancing behind bars.
quarantine diary 12:05 p.m.
Julia Fox Is Rewatching Thirteen and Kalifornia in Quarantine “I love a hillbilly and Brad Pitt fantasy moment. And I love serial-killer movies.”
More Stories