The world of tarot centers around 22 Major Arcanum — from the innocence of the Fool to the lust of the Devil. The world of American Horror Story: Coven centers around its own set of Arcanum — from the innocence of young witch Zoe Benson to the lust of its own Devil figure, Fiona Goode. We paired the two up, and matched other tarot archetypes with their appropriate AHS pair: See our partial deck of Coven cards below, and feel free to integrate them into your next reading. 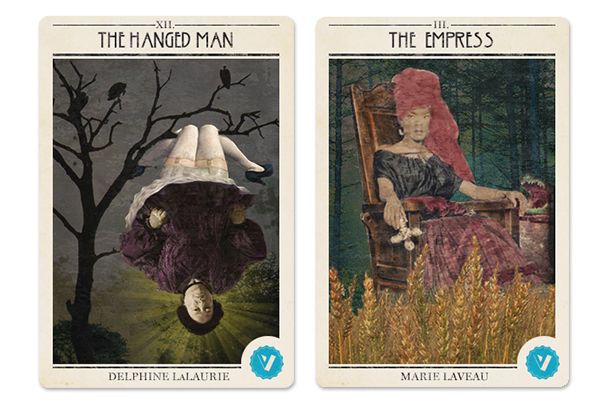 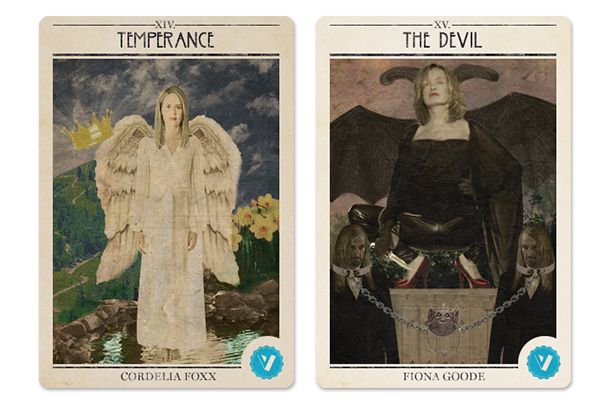 Kyle (Evan Peters) and Zoe (Taissa Farmiga) are the star-crossed Lovers; Madison Montgomery (Emma Roberts) is the maybe-soon-to-be Supreme Magician. (If she can come back from the dead.) 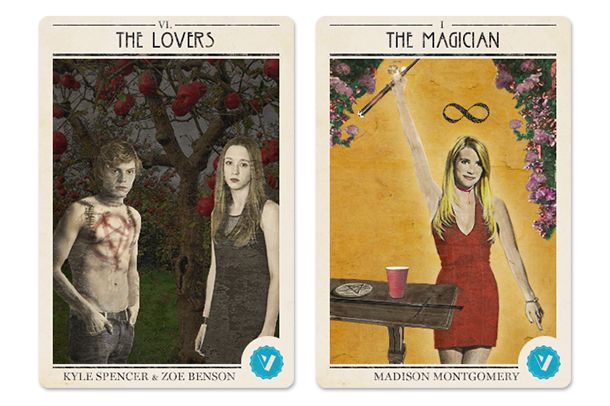 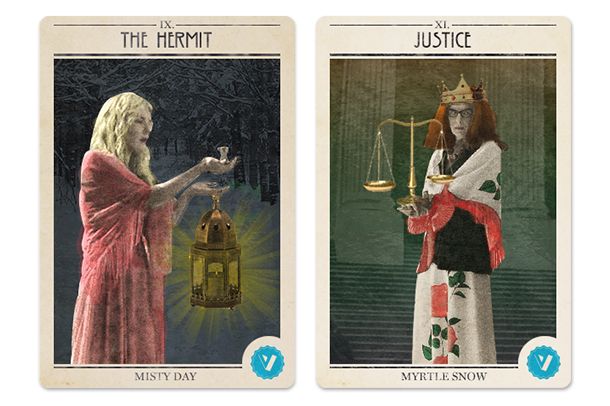 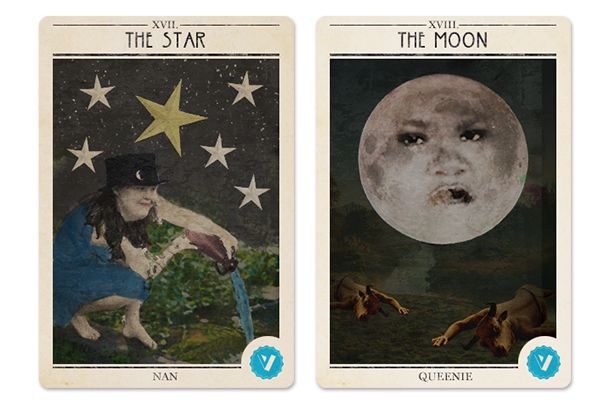 spoilers 6 mins ago
Let’s Talk About the End of Better Call Saul As it turns out, the Breaking Bad prequel/sequel is also TV’s best time-travel show.
oz-ish 19 mins ago
Kenya Barris Is Off to See the (Reimagined) Wizard of Oz The Black-ish creator will write and direct a new take on the 1939 musical movie.
overnights 10:00 p.m.
Industry Recap: Execute This week, Harper and Jesse star in a high-stakes comedy of errors in Wales.
overnights 9:30 p.m.
Below Deck Mediterranean Recap: Courtney’s Ready to Twerk After the drama from last week, Natasha goes AWOL and gets on Kyle and Natalya’s nerves.
birthday presents 8:34 p.m.
Nipsey Hussle Has Been Posthumously Honored With a Hollywood Walk of Fame Star The ceremony took place on what would’ve been his 37th birthday.
tweet tweet 6:42 p.m.
Viola Davis Will Be the Head Honcho of the Hunger Games Prequel She’ll star in The Ballad of Songbirds and Snakes as Dr. Volumnia Gaul.
breakups 6:27 p.m.
Michelle Branch Files to Divorce the Black Keys’ Patrick Carney She took the step a day after announcing their split online.
oscars 1973 6:17 p.m.
The Academy Finally Apologizes to Sacheen Littlefeather for Mistreatment The Indigenous activist was booed at the 1973 Oscars for protesting Native American mistreatment.
what we know 6:15 p.m.
Salman Rushdie Is on the ‘Road to Recovery’ Following Gruesome Attack The acclaimed author was grievously wounded and remains hospitalized but was taken off a ventilator and again able to speak on Saturday.
respect the classics 5:50 p.m.
Everyone Thank South Park for Reuniting Rush Geddy!! Alex!! Emotions!!
coming soon 5:27 p.m.
Succumb to The Lord of the Rings: The Rings of Power Daddy Bezos wants your sweet, sweet attention.
you know nothing 5:22 p.m.
The Game of Thrones Prequel House of the Dragon Is Here at Last All the lore, just in time for its August 21 premiere.
the industry 4:04 p.m.
Drake Just Broke Another Beatles Record on the Charts Leave it to DJ Khaled to sneak his way into music history.
deux plus 3:45 p.m.
The Latest Player in the Streaming Wars Is … Walmart? It’s struck a new deal with Paramount+.
overnights 3:19 p.m.
A League of Their Own Season-Finale Recap: The Long Walk Home It’s the bottom of the ninth.
overnights 2:54 p.m.
Flatbush Misdemeanors Recap: Sippin’ on Some Sizzurp It was inevitable that Drew would find out that Dan was responsible for his current spate of misfortunes.
overnights 2:49 p.m.
A League of Their Own Recap: Take Your Shot Things are not going peachy for the Rockford Peaches.
dancing through life 2:40 p.m.
Solange Is On Her Way to the Ballet New York City Ballet has commissioned Knowles for a composition, to premiere September 28.
hbo axe’d 2:25 p.m.
The HBO Max Layoffs Have Started Fourteen percent of the streaming service’s team, including most of the unscripted division, was sent pink slips.
trailer mix 2:17 p.m.
Guillermo del Toro’s Cabinet of Curiosities Exposes the ‘Beautiful and Horrible’ What’s weirder than Rupert Grint and Nia Vardalos both starring in a horror anthology?
More Stories