Over the next few weeks, Vulture will speak to the screenwriters behind 2013’s most acclaimed movies about the scenes they found most difficult to crack. What pivotal sequences underwent the biggest transformations on their way from script to screen? Today, Alfonso Cuarón and his co-writer son Jonás explain the moment in Gravity that required some last-minute help from their star George Clooney. The scene is then excerpted below.

Alfonso Cuarón: Dramatically, the moment in Gravity that was hardest to nail down is when Ryan is in the Soyuz capsule and she realizes that she’s out of fuel. That’s when the character’s arc gets defined. At the end of that scene, she completely loses any hope and faith, and she shuts off the oxygen, leading to the hallucination in which George’s character Matt comes back and she gets the will to live again. It was a hard chunk of the screenplay to write, because so much needed to be conveyed and you only have one character. The challenge was to reconcile this sudden will for life with the backstory we developed about Ryan’s dead daughter.

Jonás Cuarón: For a few drafts, we really struggled with how to represent it.

Alfonso Cuarón: There are three beats that are part of this arc. Early on, we nailed the conversation with the Inuit fisherman, and Jonás went to Greenland to shoot that same scene from the point of view of the Inuit. The next part, which came more or less organically, was the dream that Matt comes back. But the moment after that, where she turns the oxygen back on, that’s the one that troubled us the most. George is being humble, because he really helped us figure out this scene. He saw that we were struggling, and he sent me an e-mail: “Here are some ideas. Take whatever you want, and throw away the rest.” He’d written a draft of the scene, and that opened the door to what we ended up writing. He completely unclogged us.

Jonás Cuarón: Particularly with that scene, both of the actors were fundamental collaborators. We had plotted the harmonies that we wanted for this film, but it wasn’t until we started collaborating with them that we were able to draft the melody.

Alfonso Cuarón: I have to say, this is the one scene where I’m most proud of Sandra. It’s a lengthy single shot, and the camera must stay on her, but she’s conveying the whole arc and all of these emotions. 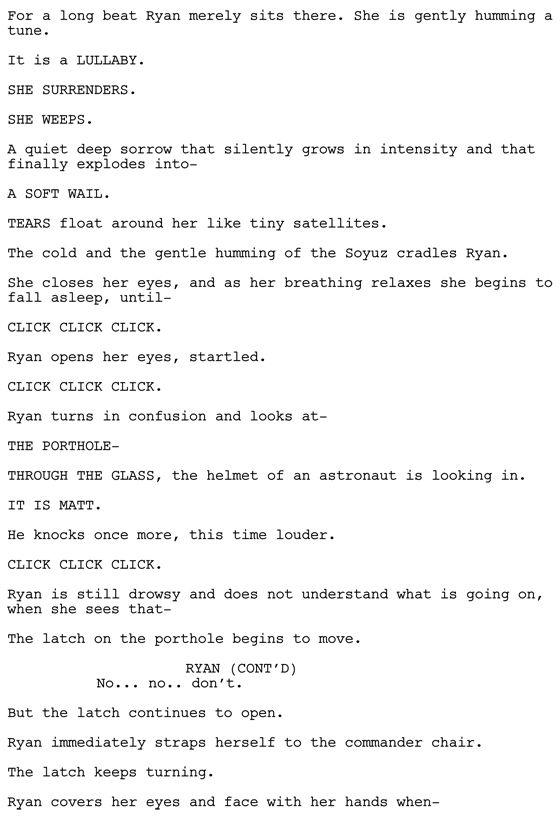 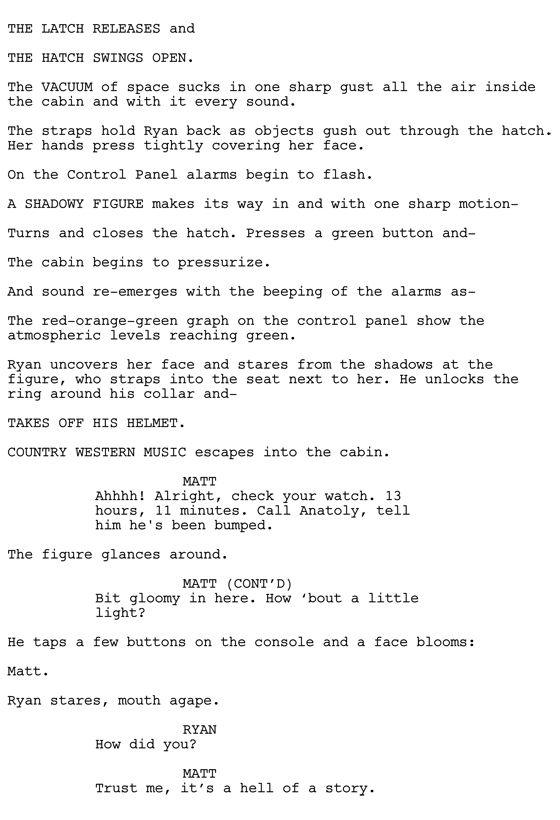 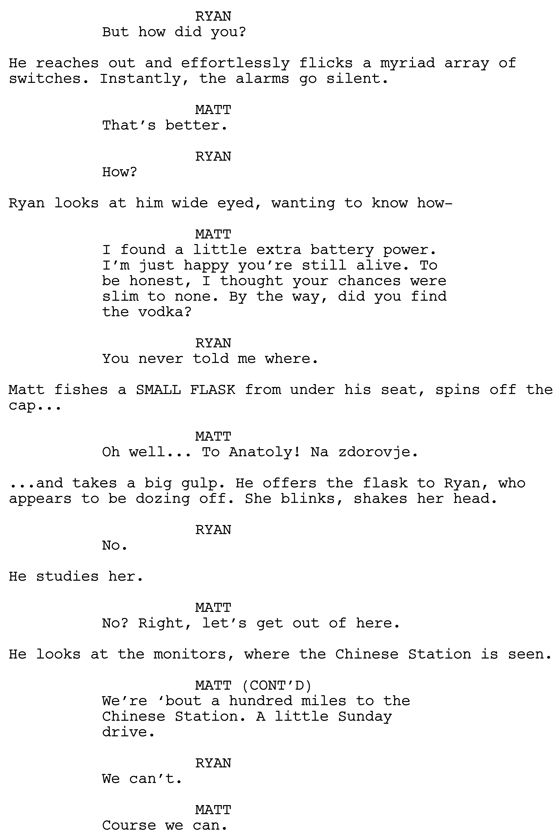 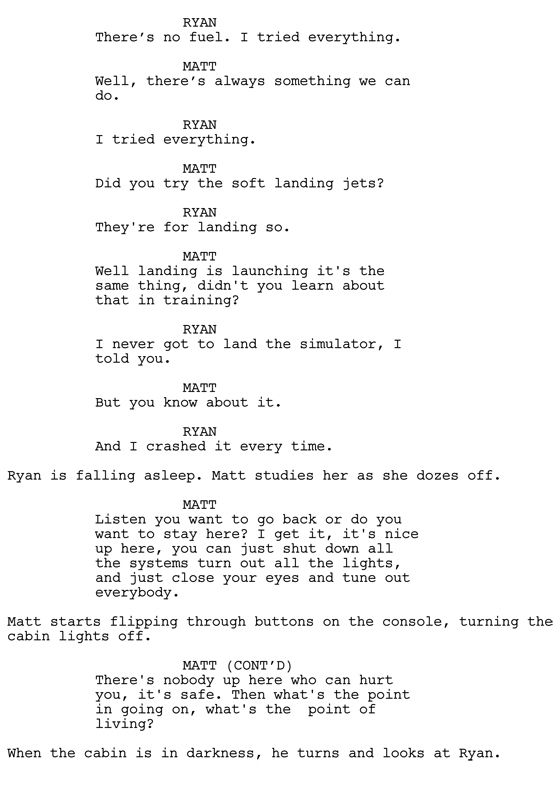 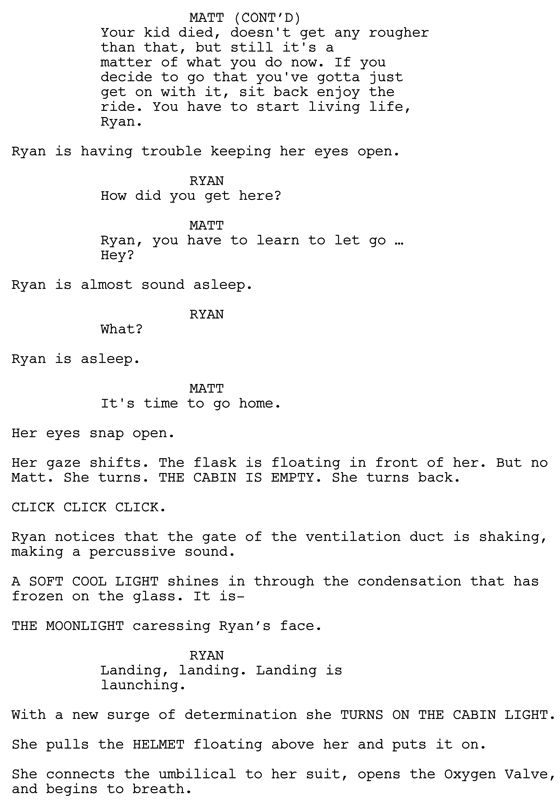 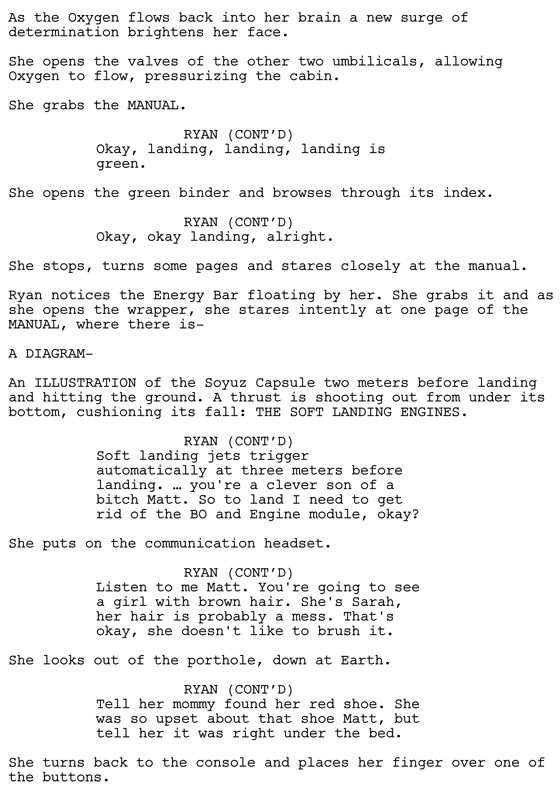 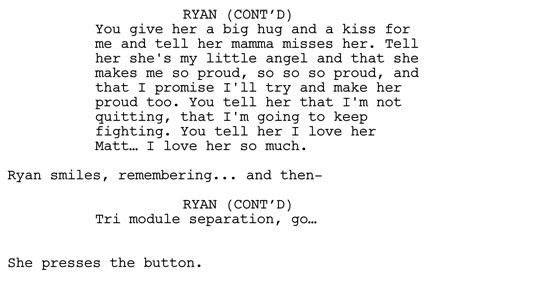 The Toughest Scene I Wrote: Screenwriter Chris Terrio on Argo