In American Horror Story: Coven, there is a scene in which Kathy Bates’s disembodied head continues to talk and talk. One might assume that this moment would be among the most GIF’able of the season. But if you’re a regular user of Tumblr (arguably the home of the GIF), you’d know that there is another AHS: Coven GIF that puts all others to shame.

It’s so”everywhere” that jokes about the GIF’s prevalence are also jokes.

By now, the context is practically irrelevant. But in case you were wondering, Madison Montgomery (played by Emma Roberts) is murdered by reigning Supreme witch Fiona Goode (Jessica Lange), who is attempting to eliminate who she thinks is in line for her throne. Turns out, no one’s actually dead on this magical show and another witch, Misty Day (Lily Rabe), brings her back from the dead. To get Fiona back, the witches attempt to scare her into killing herself. Madison’s “surprise, bitch” is the beginning of that:

It’s a quote so quotable that it fits into practically every situation — most common, a Tumblr user’s imitation of themselves (see: “me coming back to McDonald’s on the same day” or “me at my high school reunion”).

But it hasn’t stopped there. Take, Beyoncé’s surprise album, via Brice Sander: 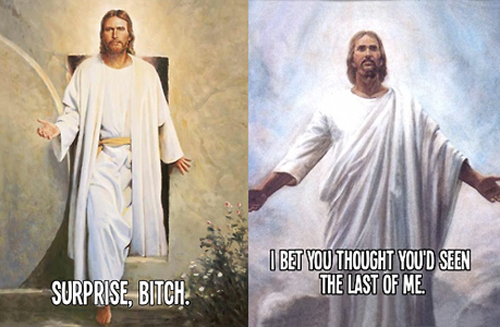 Miss New York from Flavor of Love, via deathbydaniel.tumblr.com:

The Sherlock trailer, via swimming-through-space.tumblr.com:

… and that’s not even all of them. “Surprise, bitch” will likely live on well into next year and beyond. But might there be another American Horror Story GIF in contention for the crown? Behold. Which will become Supreme?