It’s hard to say no to a Martin Scorsese movie, especially because at 71 years old, the master American filmmaker probably doesn’t have that many more films left in him. But The Wolf of Wall Street, his fifth collaboration with Leonard DiCaprio, is a muscular and aggressive story that feels as if it were made by a much younger director. Some critics have balked at Wolf’s excesses; in his review, Vulture’s David Edelstein called it an “endurance test,” writing “Martin Scorsese continues his worship of masculine energy: energy for its own sake, energy as a means of actualizing the self, energy because there’s nothing worse in Scorsese’s cosmos than passivity, which inevitably translates as impotence. But what happens in a movie when that energy is willfully indiscriminate — shapeless, conscienceless, mindless?” Did the bacchanal leave you feeling coked up? Or did you walk out as woozy and numb as if you had just popped half a bottle of expired quaaludes? The Monday Movie Club is now in session. Let us know what you thought.

Does The Wolf of Wall Street exalt Jordan Belfort’s excesses?
Belfort and friends do many, many terrible things over the course of the movie. They are id incarnate, seemingly incapable of saying no to any drug or car or boat or helicopter or piece of tail that crosses their paths. At film’s end, Belfort briefly attends white collar prison and is ejected back into the world as a motivational speaker, ready to sucker a new group of schmoes. There’s a belief by some critics (and presumably some audience members) that the film glorifies Belfort’s actions and doesn’t provide anything even close to a comeuppance. In the Village Voice, Stephanie Zacharek writes, “One hour of that boorishness would be more than enough; by the end of the second, you might be wondering if anyone, including Scorsese, is ever going to call these guys on their self-absorbed idiocy.” But as Criticwire’s Sam Adams points out in the headline to his piece, “Real life hasn’t punished Jordan Belfort. So why should The Wolf of Wall Street?”

Is The Wolf of Wall Street too long?
This has been a point of discussion since before anyone had actually seen the movie. There is no right or wrong answer to this question — some viewers would have preferred a much shorter movie and some might have wanted to see even more. (Just kidding, this movie didn’t need to be any longer.)

Are you so happy you didn’t choose to see this with your parents over the holiday?
The Wolf of Wall Street is a HARD hard-R movie. Orgies, female full-frontal nudity, the oft-mentioned scene of Belfort snorting cocaine out of a prostitute’s ass, a quaalude-high Jonah Hill jerking off in the middle of a Hamptons house party, Dicaprio with a lit candle up his ass, more uses of the word motherfucker than I don’t know what — pretty much a perfect Christmas Day pick. Would this have been the greatest terrible holiday movie pick for the whole family to see since The Girl With the Dragon Tattoo? 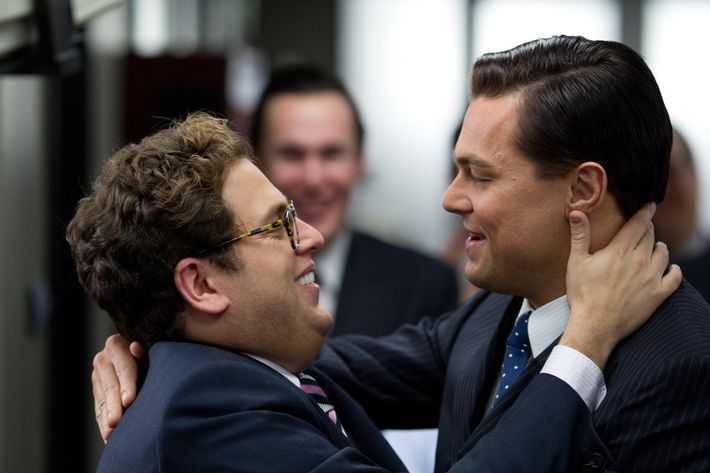 Donnie’s chompers FTW?
Who had better prominent front teeth: Jonah Hill in The Wolf of Wall Street or the snowman in Frozen?

Is Coach Taylor doomed to play government officials for the rest of his career?
Following his roles as a CIA station chief in Zero Dark Thirty, a small-town sheriff in Super 8, and the White House Chief of Staff in Argo, Kyle Chandler plays a dogged FBI agent in The Wolf of Wall Street. We would really like Chandler to follow our advice and branch out, please. Maybe more roles like the one he played in this summer’s The Spectacular Now, something more complicated than a beige bureaucrat.

How great was that quaalude scene?
That whole sequence — Belfort falling down at the country club, crawling into his car, driving home, and saving Donnie from choking on deli meats — is an instant classic, right?

+Comments Leave a Comment
Does The Wolf of Wall Street Exalt Excess?