Necessary equipment: the arcane rules, some lined or graph paper, a writing implement, and many many-sided dice. (Photo: Diacritica/Wikipedia)

Published 40 years ago this month, the first edition of Dungeons & Dragons promised “a world where the fantastic is fact and magic really works!” To outsiders, it may seem impenetrably complex or impossibly nerdy, but the tabletop role-playing game has inspired a generation of writers and filmmakers and is credited with giving birth to the modern video-game industry. (Community creator Dan Harmon cited it as one of his main influences in New York Magazine.) And now, a birthday review.

Sit down with friends and pretend you’re the heroes of a fantasy story narrated by one of the participants (“the Dungeon Master”) and mediated by a few rules and rolling dice.

Long version
Study more than 300 rule books and supplements. Spend hundreds of dollars on dice, figurines, and maps. Find friends who are willing to do the same. 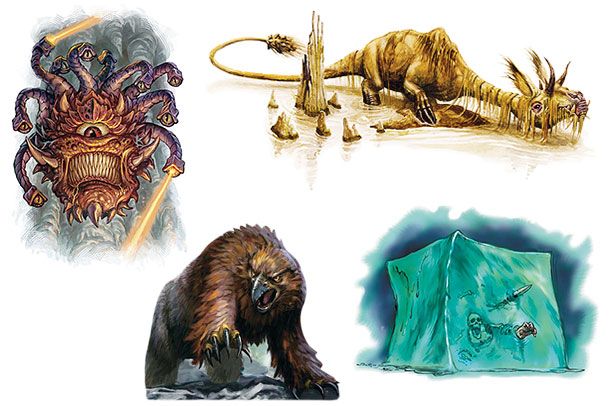 David M. Ewalt is the author of the book Of Dice and Men: The Story of Dungeons & Dragons and the People Who Play It (Scribner).

into the shyamalan-verse 9:02 p.m.
Knock at the Cabin Opens Its Door and Casts Dave Bautista The M. Night Shyamalan movie is set to release on February 3, 2023.
grammys 2022 6:44 p.m.
Drake Is No Longer a Certified Grammy Nominee The rapper withdrew his two nods for Certified Lover Boy and “Way 2 Sexy.”
crime 6:34 p.m.
Man Charged With Murder of Jackie Avant, Wife of Music Exec Clarence Avant 29-year-old Aariel Maynor is allegedly responsible for the fatal December 1 shooting.
something good 6:32 p.m.
There’s a Few Places for Us to Watch, Read, and Listen to West Side Story No need to play it cool.
chat room 6:22 p.m.
Scott Nicholson on Playing Succession’s Only Satisfied Character “I don’t think he has any aspirations to move up because he’s in a very powerful position himself.”
close reads 6:06 p.m.
That Succession Moment Is About a Lot More Than Roman’s ‘Item’ Once you manage to stop cringing, there’s a lot to unpack here.
breakout performances 6:02 p.m.
Annie Live!’s Beard Guy Almost Didn’t Have a Beard Jacob Keith Watson on playing seven roles in the live musical, the rise of Mr. Bundles, and pivoting to sea shanties.
housewives institute bulletin 5:42 p.m.
Jen Shah Is Totally Screwed Between The Housewife and the Shah Shocker, the new RHOC and RHOM, the RHOP reunion, and Porsha’s spinoff, it’s a busy time for the Institute.
overnights 5:39 p.m.
Power Book II: Ghost Recap: Personal Mission So! Many! Lies!
astroworld tragedy 5:33 p.m.
Travis Scott Files for Dismissal in First Legal Response to Astroworld Lawsuits The move comes as attorneys are working to consolidate the 275 current lawsuits against Scott and organizers.
the law 5:00 p.m.
What Happened When Jussie Smollett Took the Stand in his Own Defense The defense alleges the brothers asked Smollett for $1 million each to not testify in the trial.
vulture recommends 4:47 p.m.
Magdalena Bay’s Cinematic Pop Universe May Never Stop Expanding The duo’s debut, Mercurial World, is one of 2021’s best.
By Justin Curto
just asking questions 4:40 p.m.
Drawing Ghislaine Maxwell Talking to courtroom sketch artist Jane Rosenberg about her 40-year-plus career and what it’s like when a defendant illustrates you.
overnights 3:55 p.m.
PEN15 Recap: Lost in Translation Maya’s mom gets a stand-alone episode and a cool, sexy past.
overnights 3:47 p.m.
Yellowstone Recap: That’s Not Your Family John’s old-fashioned ways of doings things seem to be falling short.
balls 3:27 p.m.
The Boys Animated Spinoff Looks Like Junk, Literally They’re going balls to the wall.
rock star & the mole woman 3:15 p.m.
A Timeline of Roman and Gerri’s Succession Sexual Tension For all you disgusting little slime puppies.
who's laughing? 3:09 p.m.
Netflix Is a Joke Festival Lines Up John Mulaney, Pete Davidson, and More Netflix Is a Joke: The Festival is happening in Los Angeles from April 28 to May 8, 2022.
vulture lists 2:45 p.m.
All the Best Sweaters on Succession, Ranked All hail Shiv’s turtlenecks.
go ask alice 1:30 p.m.
Everything We Know About The Matrix Resurrections So Far Where is Morpheus? Do Neo and Trinity not remember each other? Why is only one Wachowski involved? Let’s see how deep the rabbit hole goes.
By Richard Newby
More Stories