In this series, Vulture has been speaking to the screenwriters behind 2013’s most acclaimed movies about the scenes they found most difficult to crack. What pivotal sequences underwent the biggest transformations on their way from script to screen? Today, John Ridley talks about the jaw-dropping interlude in 12 Years a Slave where Solomon and Patsey encounter Alfre Woodard’s Mistress Shaw. The scene, adapted by Ridley from the memoir by Solomon Northup, is then excerpted below.

The scene with Mistress Shaw was challenging to write on a lot of levels. It’s a place where I had to walk a tightrope, and I could fall nastily. You’re looking at a scene that runs about two and a half pages that has to encompass so many things: plot points, new character, emotional turns. To me, it was kind of like running a very tight one-act play.

Solomon’s writing in the memoir is so elevated and the language that he uses is so evocative and specific that there were many places in the script where I could take his dialogue and just transpose that, but then there were some scenes in the film that were referenced in the memoir that were not really excavated at all. The scene with Mistress Shaw was one of those scenes: It was only about a line or two lines in the memoir, where he talks about having to go fetch Patsey and describes Mistress Shaw. So writing this scene was a complete anthropological piece, and I was very concerned in places that people would see me in it, that they would feel like this was someone in 2013 writing it and not Solomon. This was a place where the dialogue could easily sound imprecise or anachronistic, and I wanted to approach this with an invisible hand.

It’s challenging because it’s lighter than the other scenes, a bit of an oasis. It’s a bit of a WTF moment for the audience: We’re introducing a whole new character late in the film, a stand-alone character whose circumstances are slightly unique to the rest of the story. I thought that was really important to include, because a lot of folks may have been completely unfamiliar with the concept of the woman of color in that era being able to elevate herself to a degree, or the notion that a white master may have felt secure enough not just to have a black mistress but one that he could have a relationship with openly on that level. For the film to be at all relevant, it’s got to be informative, and I thought that was an element that would be informative to an audience, as opposed to being merely monotonous with the circumstances and storytelling of Solomon.

Within the scene itself, it goes through several turns emotionally: It starts with Solomon running and having a real sense of urgency, and then there’s a level of surrealness when he arrives at this plantation and sees Patsey and Mistress Shaw having tea. There’s some levity there, but then it ends on a statement of faith and hope for the future, and it’s one of the few places where an individual who is in and of those circumstances can really demonstrate that they believe that there is a better tomorrow, and speak to the power of the spirit for those folks who were most deeply embedded in that system of slavery. 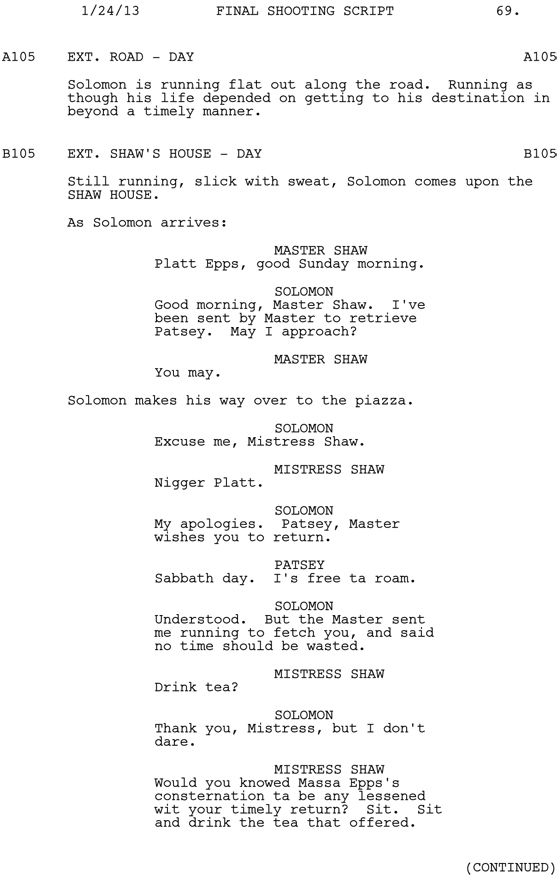 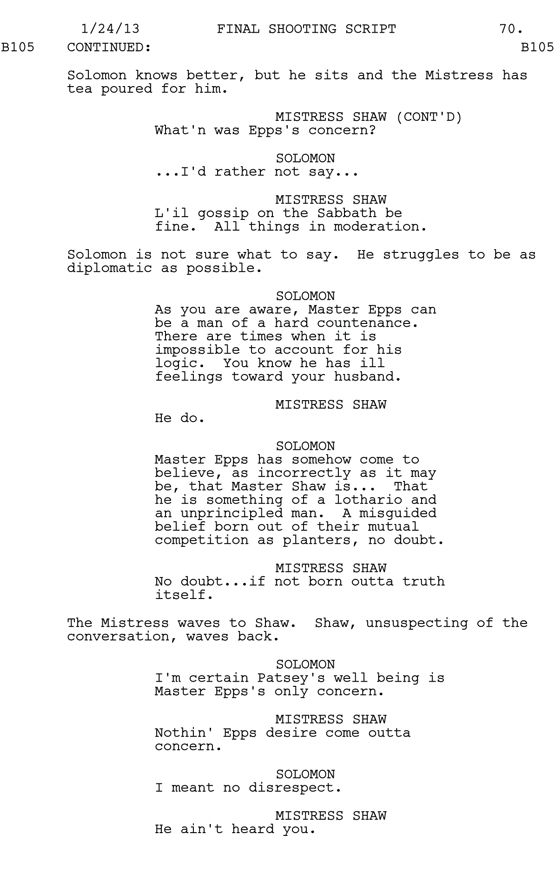 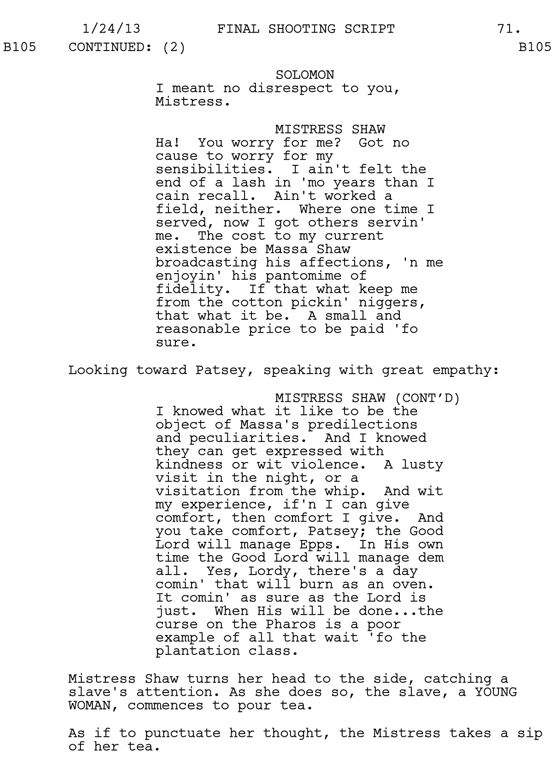 The Toughest Scene I Wrote: Alfonso Cuarón on Gravity

cancellations 7 mins ago
HBO Max Ghosts FBoy Island After two seasons of the Nikki Glaser-hosted show.
timelines 7:31 p.m.
The Complete History of Ezra Miller’s Controversial Career From kidnapping allegations to pleading not guilty to felony charges to the DCEU’s master plan.
theater 6:46 p.m.
Becky Nurse of Salem’s Dark Brew of Witchery and Dunkin’ Deirdre O’Connell nearly holds together Sarah Ruhl’s play set in modern Salem.
trailer mix 6:37 p.m.
Shudder Acquires Viral Horror Movie Skinamarink It opens in theaters January 13, 2023.
bong hive 6:36 p.m.
Robert Pattinson Awakes From Cryogenic Sleep As Mickey 17 Bong Joon Ho’s Parasite follow-up has a teaser trailer.
the law 6:24 p.m.
Naomi Judd’s Family Has Filed to Dismiss Lawsuit Over Her Death Records In part because journalists are not seeking photos or body cam footage.
explainers 6:03 p.m.
The Biggest Questions Ahead of the Tory Lanez–Megan Thee Stallion Trial Here’s what could happen at the high-profile trial, where Megan has accused Lanez of shooting her in the foot.
vulture lists 5:00 p.m.
Every The Office Christmas Episode, Ranked From Belsnickel to Benihana.
un-plussed 4:25 p.m.
Are They Really Just Gonna Call It ‘Max’? HBO Max and Discovery+’s new combined streaming service is getting closer to picking a name.
sad girls rise 3:41 p.m.
SZA Puts Fans on Alert, Announces New Album S.O.S And a Phoebe Bridgers feature is spotted in the full track list.
overnights 3:14 p.m.
George & Tammy Series-Premiere Recap: Playin’ Possum H-E-double-L breaks loose in Nashville when Tammy Wynette meets George Jones.
my single is dropping 2:25 p.m.
All Caroline Polachek Wants for Valentine’s Day Is Desire Welcome to her island.
toasts and roasts 2:15 p.m.
At the Kennedy Center Honors, George Clooney and U2 Get Their Flowers Gladys Knight, Amy Grant, and Tania León were also celebrated during one of Washington’s most star-studded events of the year.
gma3 goss: what you need to know 1:27 p.m.
T.J. Holmes and Amy Robach’s GMA3 Flirtfest Is Going on Hiatus Holmes and Robach simply “have the day off.”
trailer mix 1:18 p.m.
You People Are Coming to Dinner Kenya Barris and Jonah Hill’s take on the rom-com hits Netflix on January 27.
emergency discussion 1:15 p.m.
How Is His Dark Materials Going to Pull This Off? The series’ final season takes on the difficult task of translating many heady, absurd, and arguably heretical elements from The Amber Spyglass.
*beyoncé voice* texas 12:51 p.m.
Guns N’ Roses Is Suing a Texas Arms Dealer That Stole Its Name “As well as its gun sales, the store also sells a small amount of roses …”
vulture 10x10 12:00 p.m.
The Mennonite Puzzle 16-Across, Three Letters: Song title for Zayn, Harry Styles, or Kiss.
gorgeous gowns 11:32 a.m.
Julia Roberts Was Festooned in Cloon at the Kennedy Center Honors New meme format dropped!
best of 2022 11:00 a.m.
The Best Comedy Specials of 2022 The year’s best releases had some urgency behind their existence: capturing this thing at this moment.
By Kathryn VanArendonk
More Stories