Gobs of romance with a dose of wacky antics — I love it when The Mindy Project gives me what I want for Christmas, even (especially!) when it’s the same thing it always gives me. Well, that plus a life-changing dance sequence. That’s all I ask from a reliable television show/gift-giving loved one.

The cold open, which in the tradition of The Office is a mere mood setter that stands on its own, provides the first big shot of wacky holiday antics, with our hapless heroine dragging a Christmas tree through the streets of New York by herself (When Harry Met Sally allusion No. 97) only to find her office mates had installed a beautiful tree already. She asks what that is, rhetorically, only for Peter to provide a typically insensitive answer: “How Hindu are you? It’s a Christmas tree.” And then she chucks it out the back door. Perfect.

Things progress even more promisingly when Betsy announces, “Everyone, Dr. Reed is thin and handsome again!” (Santa has at last granted my wish for this random fat-suit plotline to disappear.) Cliff also returns to make good on a frustratingly unresolved romance: He’s now commuting daily with Mindy because he stays at Heather’s all the time. But — uh-oh! — he was up until 3 a.m. fighting with her. “Not you and Heather!” Mindy plays along. “You guys are one of the greatest couples of all time!” Alas, Cliff and Heather are on the rocks because Heather hates how he organizes his sweaters in ROY G BIV color order; on the other hand, they have concert tickets this month, so they can’t break up.

Mindy sees the potential, though, so she has a plan: She’ll throw an office Christmas party for the entire building, which includes Cliff. It quickly evolves that it’ll have to be gluten-free, since Tamra has Celiac disease, notes a still-smitten Morgan. Peter requests that it also be alcohol-free, since he gets too crazy when he drinks too much. (“Last year, I made sex to a Christmas tree.”) One thing this party will have is Maria Menounos, returning to play herself — last year she was a mere spokesmodel for the Deslauriers, but now she’s dating … one of them. (Okay, fine, I’ll actually look it up. There: It’s Brendan.) It will also include lie-based confusions once Mindy fibs about actually dating Cliff just to show Brendan she has it together.

Now there’s an official plan, which apparently is set to “Blurred Lines,” as any ill-fated plan must be. Step 1: Throw the greatest party anyone has ever seen and be talking to a cool guy when Cliff gets there. Step 2: Do a sexy version of “Santa Baby” (naturally). Step 3: Say you’re overheated and need some air so he has to follow you to a private location. Step 4: Kiss. In a much more promising development, Mindy has a bra that holds two full bottles of wine. (Please let this be the first in a line of Mindy-branded products.) Danny seems taken with it, though not for vinophilic reasons. (“You should wear that every day.”)

Now the plan is in full swing, though of course it’s off from step one, when Mindy identifies a man in traditional African dress as her designated cool guy to talk to. She whispers about her “man trap” plan to get him to play along with her, but he takes her literally. “I was once caught in a man trap,” he explains, adding that he only narrowly escaped “the horrors of human trafficking.” This shows Mindy at its best: In the heat of an adorable romantic-comedy plot, the most ingeniously random addition makes for great humor. Why not have an African contingent, in addition to several taxidermists, at the party? Why wouldn’t their office building include such characters?

Things, as you can imagine, go south from there. Mindy ditches “Santa Baby” after the music starts, once she sees that Cliff left. (Why? Well, because Brendan told him that Mindy already had a boyfriend, not knowing that she’d lied, and that said pretend boyfriend was Cliff.) Maria takes over the song, thrilling everyone (particularly a smitten Peter) except Brendan. They promptly break up afterward: “You were offering your womanhood to Santa in exchange for material gifts!”

As the party heats up to its climactic antics, Jeremy wants to stress-eat and his short-rib-flavored mouth spray isn’t doing the trick — but that gingerbread Monticello that Danny has been slaving over might. Mindy’s wine bra is dry. (“I knew I should have bought the Long Island Iced Panties.”) And she’s beyond sad that her Cliff plan failed. “Sad is when the cab driver thought I was Jaden Smith,” she explains to Danny. “I’m heartbroken.” But Danny, who has been short-shrifting Mindy on Secret Santa gifts (she’s received gauze and an office stapler), has something that might cheer her up, because sometimes the best gifts don’t cost a thing! “I guess, if you’re, like, a poor mouse in a Christmas special,” she pouts.

But! He proves that cheesy maxim quite soundly with what I must admit is a true surprise. I don’t even know where to begin with his performance of the dance sequence from Aaliyah’s “Try Again” video. Well, okay. I’ll start with the incredibly random choice of a thirteen-year-old song. (Though I love it, and the choreography, and the tribute to the late singer.) I will continue with the fact that I watched Danny’s dance a good dozen times over and over, ostensibly to compare it to the video dance steps, which do appear to be the same choreography he’s doing. Yes, this is the kind of detail-oriented service I provide for you, Vulture readers. And I will reluctantly conclude this discussion of this dance with the fun fact that, yes, Chris Messina was a dancer when he was younger and wanted to be “the next Baryshnikov.” 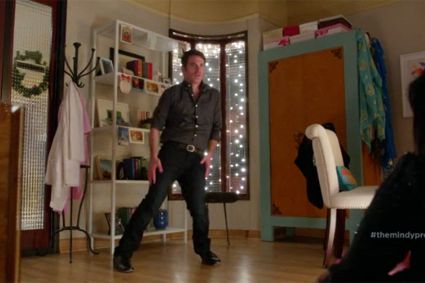 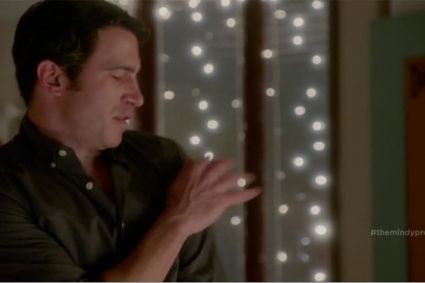 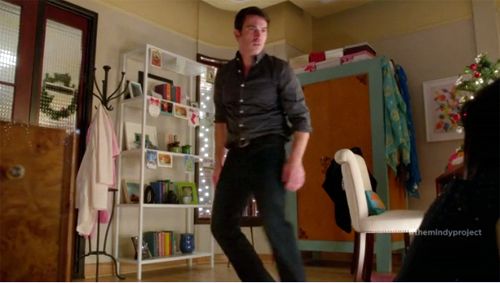 Okay, I lied, I’ll add one more thing: I loved how he danced so well but stayed in Danny character, looking like he was trying so hard not to care. (It made me wonder: Now I know why Chris Messina dances so well, but what’s Danny Castellano’s excuse?) He follows it up with the very Danny, “I know, it’s stupid, so anyway, I can just get you a gift card or write a personal check.” Because Mindy is a human being, however, she loves it, and hugs him in thanks. We get a charged kiss-ponder moment before (what else?) it’s interrupted by Jeremy barging in with the half-devoured Monticello.

Mindy says she’s going to get some fresh air (hint-hint), but Danny declines the hint. He’s going to stay and clean up the gingerbread mess. Peter approaches Maria, though it’s awkward because he’s sober. Turns out she needs a ride to a Christmas tree farm in Connecticut — and oh, look, Peter can drive because he’s sober! Cliff returns with a cookie for Mindy (“Gluten is my favorite food!”) and news of his breakup with Heather. She gets her kiss. Plan (sort of) executed!

Of course, Danny sees them, and we are sad for him, but surely his time will come. Is it too much to hope for another dance sequence to declare his undying love?

+Comments Leave a Comment
The Mindy Project Recap: Hurry Down the Chimney