Over the next few weeks, Vulture will speak to the screenwriters behind 2013’s most acclaimed movies about the scenes they found most difficult to crack. What pivotal sequences underwent the biggest transformations on their way from script to screen? Today, Richard Linklater discusses the epic hotel room argument between longtime lovers Jesse (Ethan Hawke) and Celine (Julie Delpy) that comprises most of Before Midnight’s third act. The scene is then excerpted below.

I think by sheer volume, Jesse and Celine’s hotel room fight was the toughest scene to write. The whole film leads to it: From the very first scene in the movie, we’ve revealed a fault line in their relationship, and what we experience in the hotel room is the full maturation of the idea. This fight started years ago, and we’re just dropping in on this month’s version.

Long-term couples always have issues that will never fully resolve themselves, so every now and then, you have to throw down and recalibrate the relationship — as long as you’re still trying! To me, that was what was optimistic about this scene. People were like, “Oh no, they’re fighting, is it all over for them?” No! It’s still romantic, because they care enough to engage. With a lot of couples, one person’s fighting and the other person is reading the paper, not even listening, whereas Jesse and Celine still care. They’re both in the game.

People have called this the fight scene, but my constant direction to Ethan and Julie while we were making it was, “This is a love scene.” And it literally starts off that way: For several minutes, we’re about to have the first sex scene we’ve had over three movies with these two. And then all it takes is one phone call to ruin it. He keeps trying to finish this little disagreement so they can get back in the sack. When he’s taking his pants off, sadly, she’s putting her shirt back on. Timing is everything. And a lot of the things Celine is complaining about are things that Ethan and I have heard, directed at us in our relationships. I have this kind of feminine side, and Julie has a strong male personality, so she writes a lot of what Jesse will say. It’s always worked that way, although Ethan and Julie never write in character — it’s not like, “Okay, you be Jesse, and you be Celine.” We’re three writers sitting in a room, and only later do we start rehearsing it in character.

At this point, Celine and Jesse really know one another. When you’re in a relationship for this long, you get to know the other person and how they manipulate you to get what they want, you know how they fight, you know their strengths and weaknesses … so I always thought of this scene as two heavyweights going at each other. They’re like Ali vs. Frazier III! 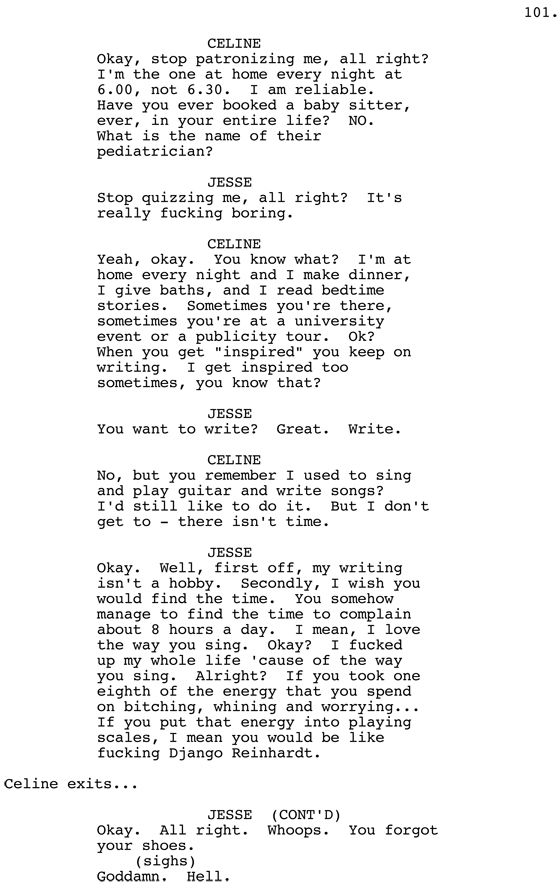 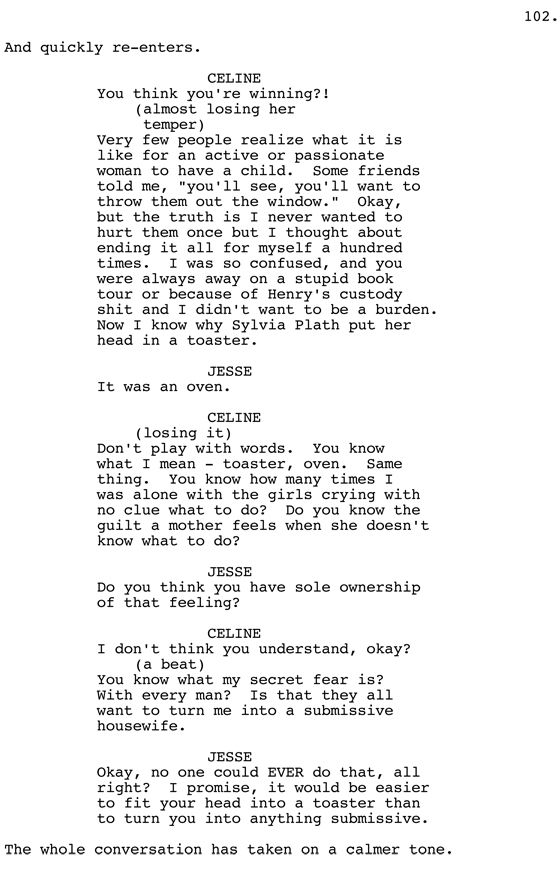 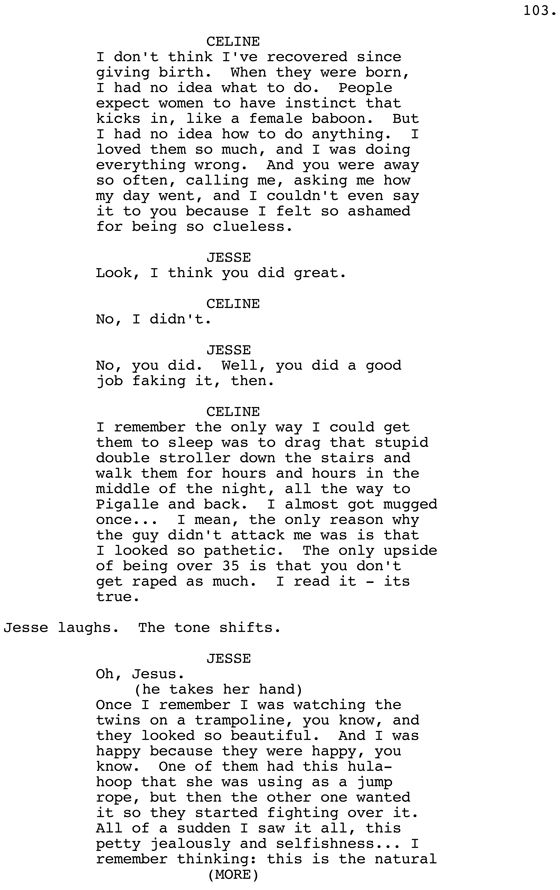 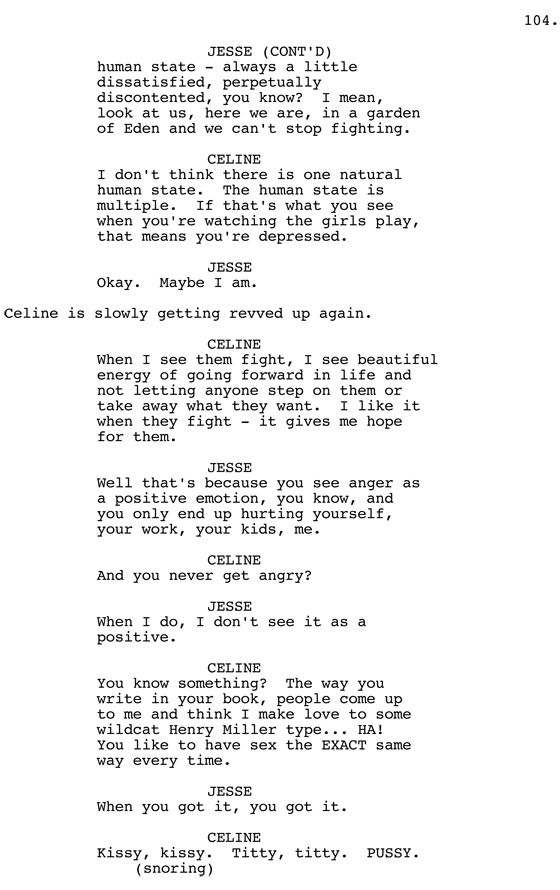 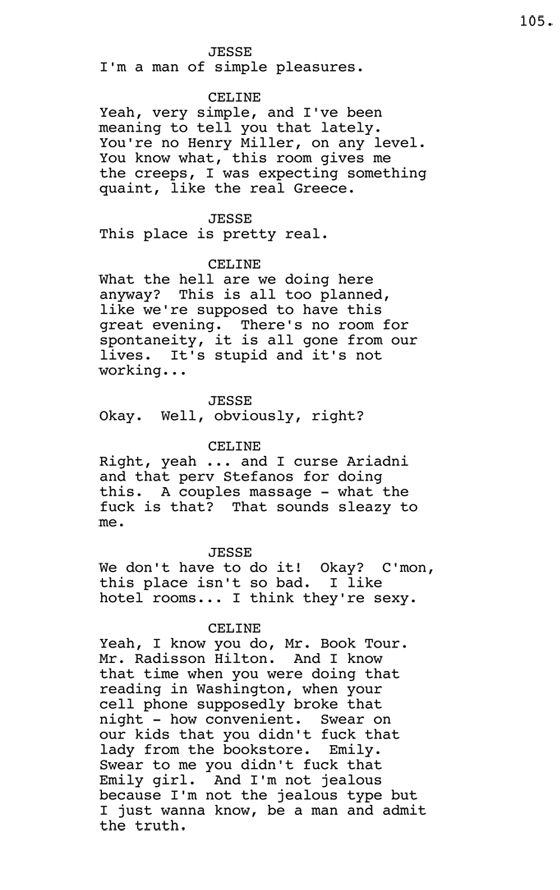 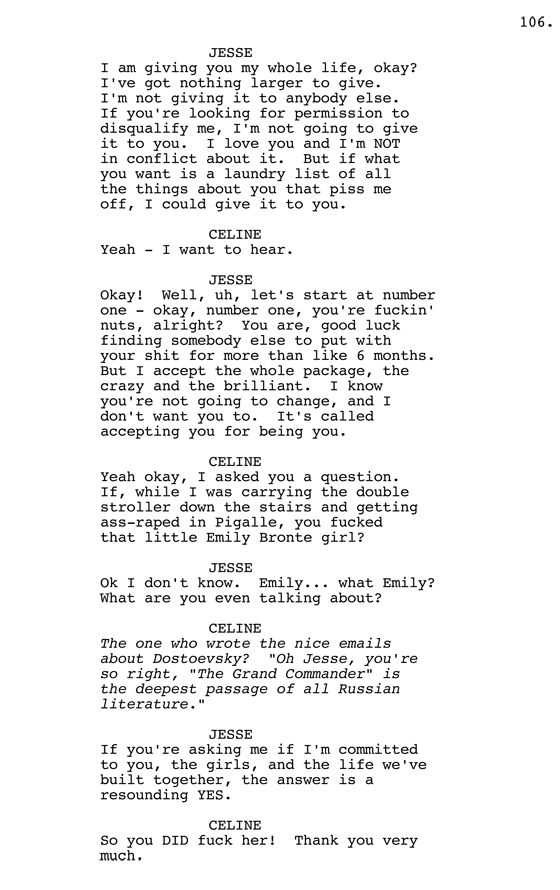 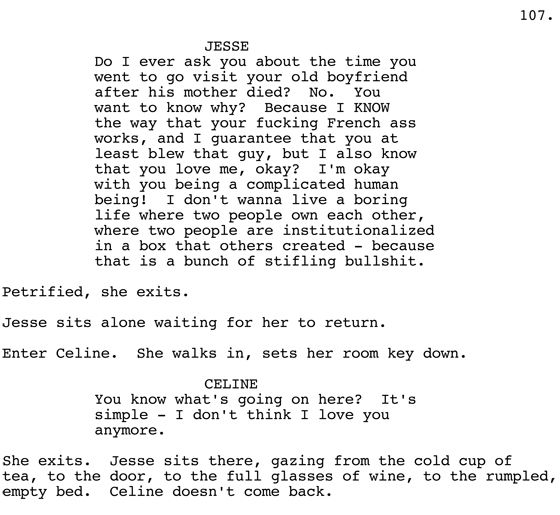 The Toughest Scene I Wrote: Alfonso Cuarón on Gravity