In this series, Vulture has been speaking to the screenwriters behind 2013’s most acclaimed movies about the scenes they found most difficult to crack. What pivotal sequences underwent the biggest transformations on their way from script to screen? Today, Danny Strong discusses the challenge of incorporating Ronald Reagan into Lee Daniels’ The Butler, which is winding down its father-son story of gracious White House butler Cecil (Forest Whitaker) and his fiery activist son (David Oyelowo) just as Reagan is introduced.

The toughest scene I wrote wasn’t a scene so much as a section. Each presidential section details how the president dealt with civil rights and it’s based around a civil rights event, and then through that event, we see how Cecil’s son fights in the event and how Cecil grows or changes from the event. When we got to Reagan, it was very difficult because Reagan’s record on civil rights was so bad, in that he basically dismantled or attacked every civil rights initiative put into place.

It was really challenging, because it was the end of the movie and I just didn’t know how to address that in a way that was dramatically satisfying for our lead character. How is he going to respond to this? It’s kind of easy to figure out how Louis is going to respond to Reagan’s race policy: He can just protest it. But I had no idea how I was going to deal with Cecil’s response to Reagan’s extremely negative civil rights record.

The real breakthrough came from an interview with someone who had worked at the White House and told me two things: One, how amazing Reagan was with the staff and how much the staff loved him personally. That made the sequence more dynamic, that we could dramatize how Reagan one-on-one with people who were African-American was amazing and wonderful, as opposed to his policies, which were very harmful. And then the person I was interviewing said she wished she would have resigned after the South African veto [which would have sanctioned the country’s pro-Apartheid government]. I said, “Oh my gosh, that’s perfect. That’s it. That’s what Cecil’s going to do: He’s going to ultimately leave the White House, and that’s going to be the fulfillment of his arc, that he’s finally learning the lesson that his son is trying to teach him over the course of the whole movie.” That was a real breakthrough. 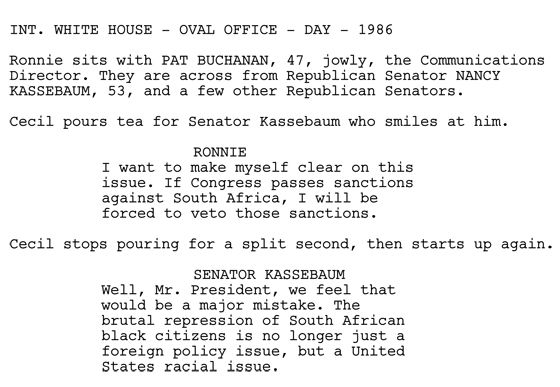 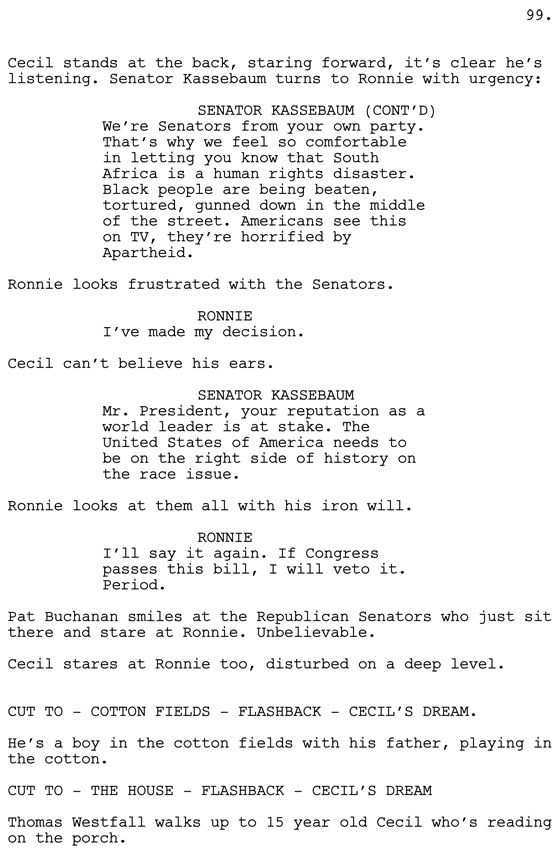 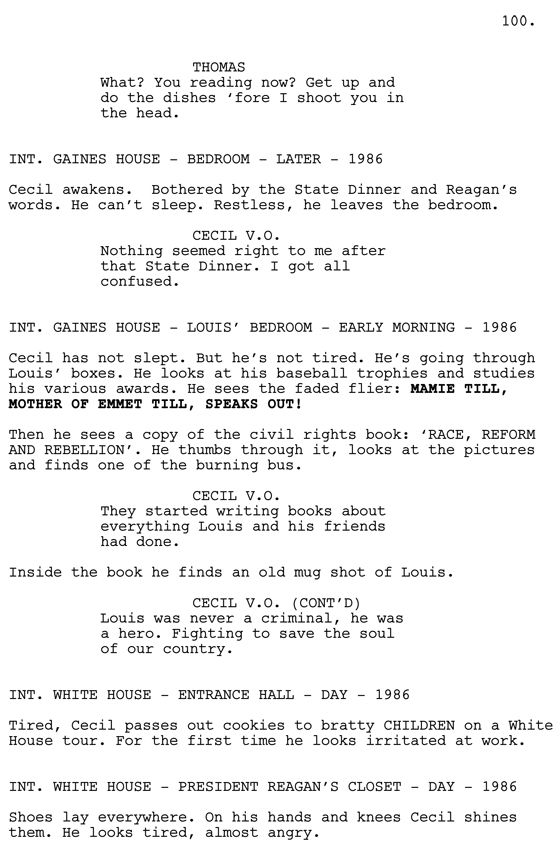 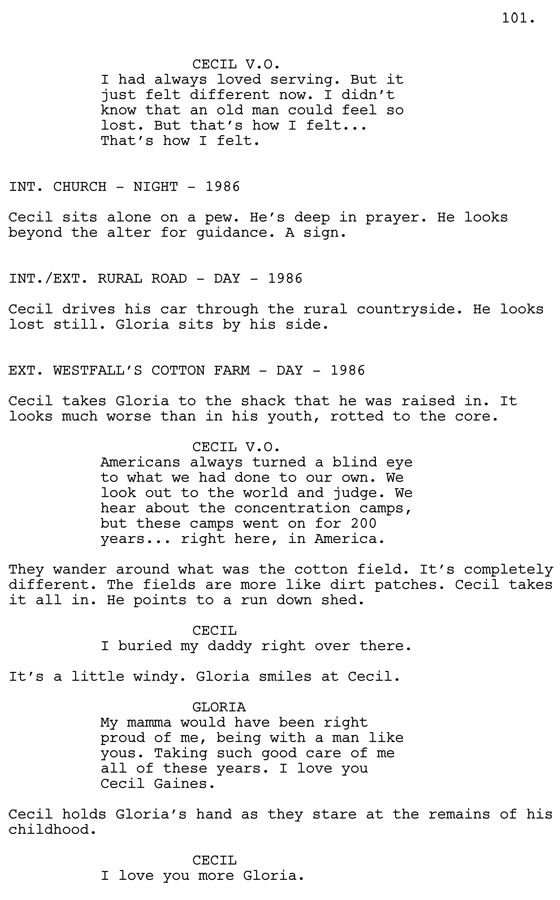 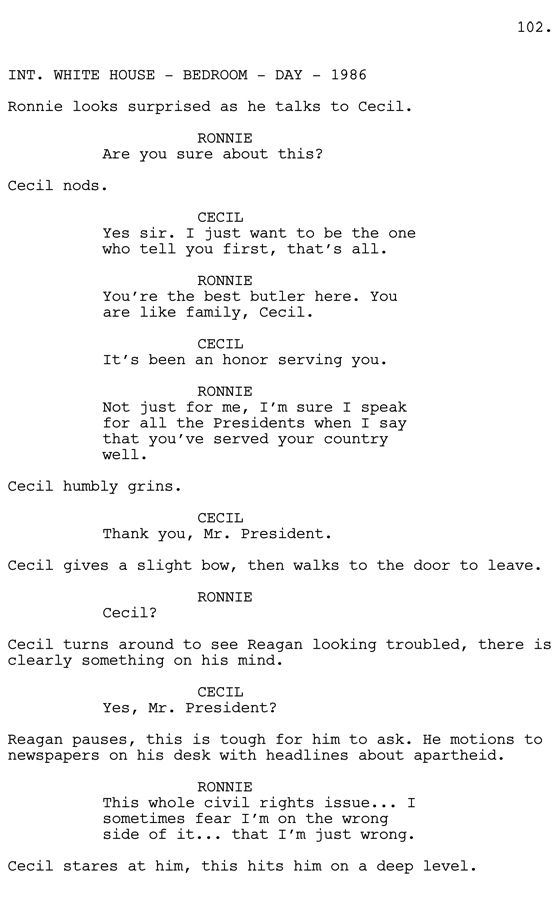 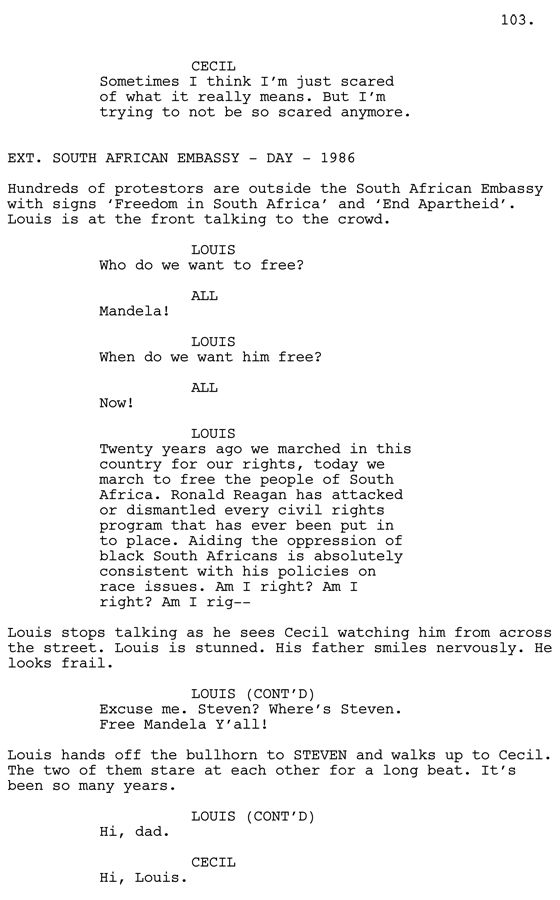 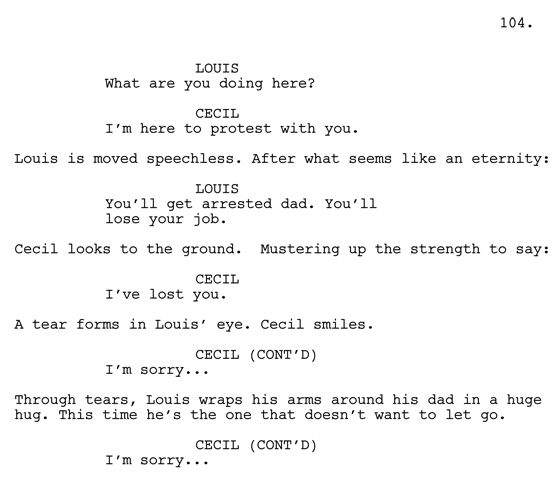 goodbyes 25 mins ago
Pete Davidson Thanks Lorne Michaels in Final ‘Weekend Update’ Bit “Lorne accidentally gifted me a sock so I’m free.”
overnights 2:18 p.m.
Saturday Night Live Season-Finale Recap: Natasha Lyonne Hosts a Good-bye Party A series of emotional send-offs overshadows the laughs in this season-ender.
cannes 2022 9:39 a.m.
‘Irma Vep Is Not a Movie. Irma Vep Is a Concept.’ Director Olivier Assayas and his new star Alicia Vikander discuss remaking his beloved movie as a TV series (or whatever you want to call it).
goodbyes 2:49 a.m.
Aidy Bryant Says Good-bye to SNL With a Final Trend Forecast Alongside Bowen Yang.
goodbyes 1:32 a.m.
Kate McKinnon Bids Farewell to SNL, Ascends to Space “I always kind of felt like an alien on this planet anyway.”
second wedding Yesterday at 6:51 p.m.
Let Drew Barrymore and Paul Feig Make Bridesmaids 2, You Cowards Free puppies for everyone!
beloved Yesterday at 5:36 p.m.
Quinta Brunson’s Mom Didn’t Understand Her Job Until Abbott Elementary “I showed [my mom] a BuzzFeed video and she was like, ‘What is this?’”
fridge fixer Yesterday at 3:26 p.m.
Jeremy Strong Practiced His Dad Jokes on Anne Hathaway The two star as fictional versions of James Gray’s parents in Armageddon Time.
overnights Yesterday at 11:08 a.m.
RuPaul’s Drag Race All Stars Recap: Monsoon Season Jinkx has reached the apex of what it means to compete in Snatch Game.
cannes 2022 Yesterday at 11:01 a.m.
George Miller Returns to Cannes With a Freaky, Maximalist Fairy Tale Three Thousand Years of Longing is a fairy tale within a fairy tale (about telling fairy tales) that feels like Miller’s answer to The Princess Bride.
By Rachel Handler
box office Yesterday at 2:01 a.m.
Everything Everywhere All at Once to Beat Uncut Gems As A24’s Biggest Hit At the domestic box office in this universe, at least.
hiatuses Yesterday at 12:05 a.m.
Doja Cat’s Tonsils Have Canceled Her Summer Performances, Including Lollapalooza She’ll be taking time off to recover from surgery.
timelines May 20, 2022
A Timeline of Travis Scott’s Post-Astroworld Public Return His previously postponed collaboration with Nike is back on.
farewells May 20, 2022
Kate McKinnon, Aidy Bryant, and Kyle Mooney Are Reportedly Leaving SNL Joining Pete Davidson in calling this season their last.
thank u next May 20, 2022
Pete Davidson Leaving SNL, Ending Longest Public Relationship Sources say the season-47 finale will be his last appearance.
protests May 20, 2022
Cannes Film Festival Removed Activist Protesting Sexual Violence in Ukraine The naked protester interrupted the red-carpet premiere of George Miller’s Three Thousand Years of Longing.
that's gossip May 20, 2022
This Newsletter Just Revealed DeuxMoi’s Probable Identity Who gossips the gossip girls?
chat room May 20, 2022
Judd Apatow on Documenting the Legacy (and Fart Jokes) of George Carlin Talking with the filmmaker about his HBO docuseries on the legendary stand-up.
cannes 2022 May 20, 2022
Chie Hayakawa’s Plan 75 Quietly Devastates Cannes The heart-wrenching dystopian film, about a government program for euthanizing senior citizens, marks the arrival of an exciting new writer-director.
overnights May 20, 2022
RuPaul’s Drag Race All Stars Season-Premiere Recap: A Winning Twist This season is already one of the best we’ve seen from the franchise, and it shows no sign of slowing down.
More Stories