The dust has settled, the sets have been struck, and “Do Re Mi” has been reprised for the very last time: It is the day after NBC’s mammoth production of The Sound of Music Live, and it is necessary to discuss what went down. What were a few of our favorite things? (Let’s not beat around the bush: We were living for Audra McDonald and the Baroness.) What were the lowlights? (Besides you-know-who’s talking scenes?) Before we must say so long and farewell, let’s relive all of those big moments together.

HIGH: Audra McDonald’s singing.
Obviously, Audra McDonald singing “Climb Ev’ry Mountain” was bound to be the night’s musical-theater highlight, and Ms. Audra McD did not disappoint. But the true surprise was that she established perhaps the strongest emotional connection to Carrie Underwood, fixing her with a super-intense “girl, I’m with you right now” stare in all their later numbers (after they clasped hands, we instinctively scanned Carrie’s fingers for broken bones) and reducing her country-star scene partner to real tears. Jesus did not have to take the wheel because Audra McDonald was already white-knuckling it for Him. 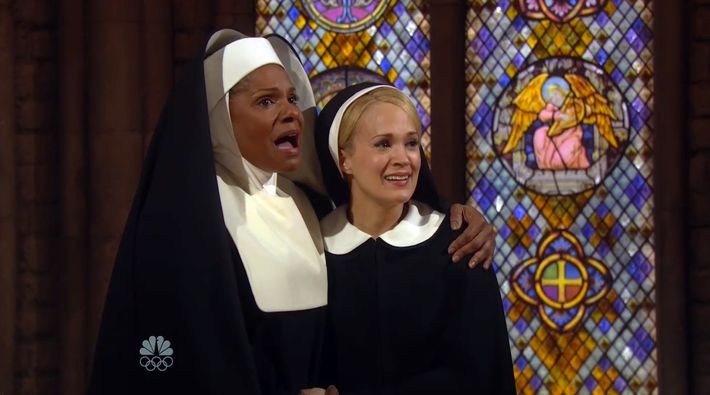 LOW: Carrie Underwood’s talking.
Let us start with kindness: Carrie Underwood’s singing was far better than expected, and she nailed the Landler, the Austrian folk dance. She did not forget a line or fall down. But no, Carrie Underwood is not an actress, and whatever natural charisma she has did not translate to the scripted dialogue. It was … well, it was the biggest problem of the night. You can’t do The Sound of Music without a compelling Maria.

HIGH: Laura Benanti and her entire wardrobe.
Just as expected, Broadway’s Laura Benanti made a perfect Baroness. Perhaps too perfect, because by the time she showed up in that amazing red pants/pink top outfit, we were rooting for her. Her singing was sublime, and repeated reminders that she was indeed the CEO of an important company (along with Carrie and Stephen’s lack of chemistry), really made it hard to believe that he wouldn’t go with the Baroness like he had originally planned. 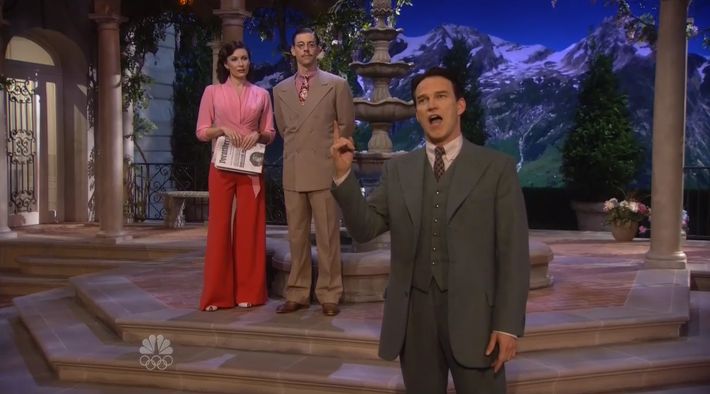 LOW: Carrie Underwood’s entire wardrobe and most of the set.
And, for that matter, Carrie Underwood’s costumes, the non-existent Abbey lighting, and all the other low-budget, borrowed-this-from-a-community-theater production values. (Did they actually borrow the woods from the fifties Mary Martin Peter Pan?) The trick about putting theater on TV is to remember that it is still on TV, and so we can see all the ill-fitting dresses and weird props in HD. A little more of that $9 million could have gone to the costume budget.

HIGH: The many, many instances of Rolfe’s shorts.
We’ll just leave a photo right here. 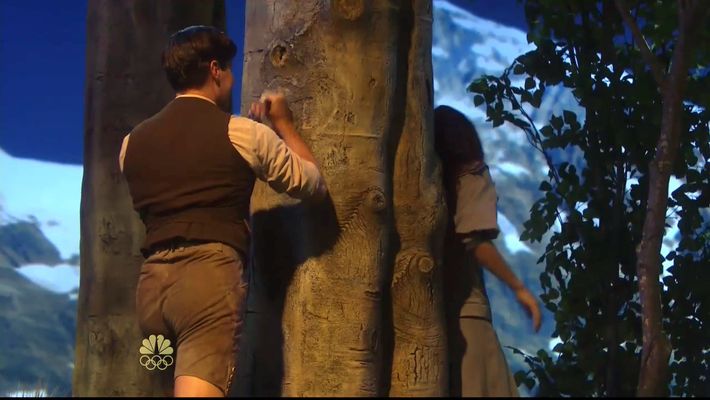 LOW: The many, many swastikas.
Did the giant swastikas during the final performance make everyone else very uncomfortable, too? Yeah. Understandable that they’re a major part of The Sound of Music’s story, but can’t you imagine the higher-ups discussing the set design? “We can do four giant ones, not five. And the armbands are fine, but please no Hitler mustaches. Max’s is offensive enough.” (Ugh, and don’t forget the giant swastika on the front page of that newspaper they were waving around during the equally offensive appeasement song.)

HIGH: “Something Good”
Credit where it’s due: We had long worried that Carrie Underwood would make power-belting mincemeat out of this beloved number from the movie, which was added to the stage production to buff up the Captain-Maria love story. And yet! This was the only moment of the whole production where Carrie seemed to truly sing in tremulous character, gently lowering her normal volume and even approaching something like tenderness. It kinda worked. We suspect it would have worked even better if she sang it to her BFF Audra McDonald (and we were here for that potential lesbian nun subplot), but we won’t be greedy.

LOW: The rest of the musical.
Yes, yes, we were told a million times — they were performing the original musical, and not the Julie Andrews classic. Well, guess what: The musical is a real snooze. A four-minute intro of nuns singing in Latin? That strange, “haha, we’re rich!” number? And, uh, the Appeasement Song? This is all before we get to the book, which is clunky and makes a whole mess of the Maria-Captain-Baroness love triangle. (Not that Moyer or Underwood performed it well, but still.) It could’ve been easily condensed, and then we all would’ve had time to watch the movie before bed. Isn’t that all you wanted?

HIGH: Kurt von Trapp and his father, Captain von Trapp.
All of the Von Trapp kids were pretty darn cute, but how could anyone not have been #TeamKurt last night? The adorably prepubescent youngster shined whenever he was given the opportunity: From his thunderstorm bravery (“Oh no! We just to be sure that you weren’t”) to his “Goatherd” solo ([yodels]), Kurt was perfectly devious, as a good Von Trapp should be. And speaking of other proficient Von Trapps, hear me out here (FYI, this is Kyle right now, because Amanda adamantly refused to cosign on this bullet): I am not going to claim that Stephen Moyer and Carrie Underwood had red-hot chemistry, and I am not fool enough to say that Moyer came within whistling distance of Christopher Plummer’s haughty/hottie performance. But really, if you watched this show with open eyes and ears, Moyer wasn’t that bad! He had a genuinely appealing singing voice, and he worked overtime to sell that character: In his first scene with Underwood, I felt he’d pushed the “officious dicksmack” angle way too hard, but in every subsequent moment, he revealed small new variations and redemptions, giving himself the room to commit to a big character arc. And even if you couldn’t get past the Vampire Bill-ness of it all, at least that added some welcome frisson to the proceedings. I’m just saying, Stephen Moyer will be playing the Phantom of the Opera onstage in two years and we should all start dealing with that now.

LOW: Where was the live audience?
The timing was off for all sorts of reasons last night: low energy, bad book, lack of interstitial music, insta-segues from the Von Trapp’s home to the Abbey. You know what fixes most of that? A giddy live audience. The cast clearly wanted one — they were pausing for laughter and applause anyway (or at least for “hang in there” faces from the silent crew). Related: Did anyone else notice how slow all the music was last night? Just plodding along, like the whole Von Trapp family was literally learning how to sing onstage in front of us. God, it took forever.

LOW: No one fell down!
Why are you going to do live television if no one falls down?

The Sound of Music Live Was a Huge Hit