Over the next few weeks, Vulture will speak to the screenwriters behind 2013’s most acclaimed movies about the scenes they found most difficult to crack. What pivotal sequences underwent the biggest transformations on their way from script to screen? Today, Drew Pearce discusses the surprising scene in Iron Man 3 that reveals the true nature of the villainous Mandarin (played by Sir Ben Kingsley). The scene is then excerpted below. (Be warned, SPOILERS follow.)

It’s interesting: When you’re doing a massive movie like this, on a technical level, the really hard scene to write is always at the end of act two. It’s the tesseract of all these agendas and plotlines, and that gets even trickier on a Marvel movie because you’re often rewriting on set as you go, so it’s like a weird cross between Cassavetes and a Rubik’s cube. And narration is always hard, too — I literally wrote and rewrote the narration for this movie 2,000 times over the course of two and a half years. But overall, as tricky as those things both were on a prosaic level, I think the Mandarin reveal scene was the most difficult one to write, conceptually.

Hopefully, the movie’s done well enough by now that this doesn’t count as a spoiler, but we obviously chose to take a direction with Sir Ben Kingsley’s version of the Mandarin that has a huge surprise. He turns out not to be the thing that the movie — and the marketing of the movie — purports him to be, which is this canon-based archnemesis to Iron Man. It gets to the trickiest thing of all the superhero movies out at the moment, which is: What makes for an interesting villain? Often, they’re just there as a dark reflection of the hero, but Shane Black, who directed Iron Man 3 and who I co-wrote the movie with, told me that the key to making massive movies in this machine that will try to sand the edges off of what you write is to go into it with bold strokes. For the Mandarin, I’d been kicking around lots of ideas about false faces and terrorist pop stars and I was really worried about telling Marvel — I thought we’d get strung up — but Shane said, “Fuck ‘em, this idea is kind of indelible. We should run towards it.” And to both of our surprise, when we pitched it to Kevin Feige, who’s the president of Marvel Studios, he took it in and said, “I love it.” He’d been trying to crack the Mandarin concept since the first Iron Man. The Mandarin was actually in the first Iron Man up until six weeks before they shot it!

And then everyone in the room turned to me and said, “Great! Now off you go to write it.” And that, obviously, is when it became more difficult. I kicked around some ideas and pitched the concept that the Mandarin would be this actor Trevor Slattery, who’s kind of an amalgam of the loveliest but also, arguably, the worst traits of all these British luvvie actors whom I’ve known and worked with … and of course loved. Weirdly, the less commentary we put into that character, the more the theme of the false face came out in that contrast. It’s an interesting thing, because there are two camps when it comes to superhero movies. There are the people who think that the darker it goes, the cleverer it is and the more pathos you have, but in the view of Shane and I, the best version for satire is in the Trojan horse that’s more entertaining and comedic. Hopefully, I think that’s what we managed with Trevor Slattery.

I remember the first day he came to set, I said to Shane, “How is Sir Ben doing with Trevor?” And Shane was like, “Yeah, I think it’s good? I think. I think he’s doing an impression of Dudley Moore in 10.” And I said, “Oh. Well, I do like Dudley Moore in 10.” And Shane was like, “Me too, so I think it’s gonna be fine.” And I waited that night for the dailies to come in, and when I saw them, I was absolutely blown away. What’s interesting is that the Iron Man movies usually have a lot of improv, and Sir Ben — God bless him — said, “Actually, improv’s not really the reason why I’m here. I loved what was on the page.” To Robert Downey Jr.’s credit, I think he’s a selfless enough actor that in this scene, he’s willing to take a step back and be the straight man to Sir Ben’s Trevor reveal. Without that, the scene wouldn’t work: Trevor is so huge that unless there’s a sense of genuine tension and reality around him, it doesn’t work at all. 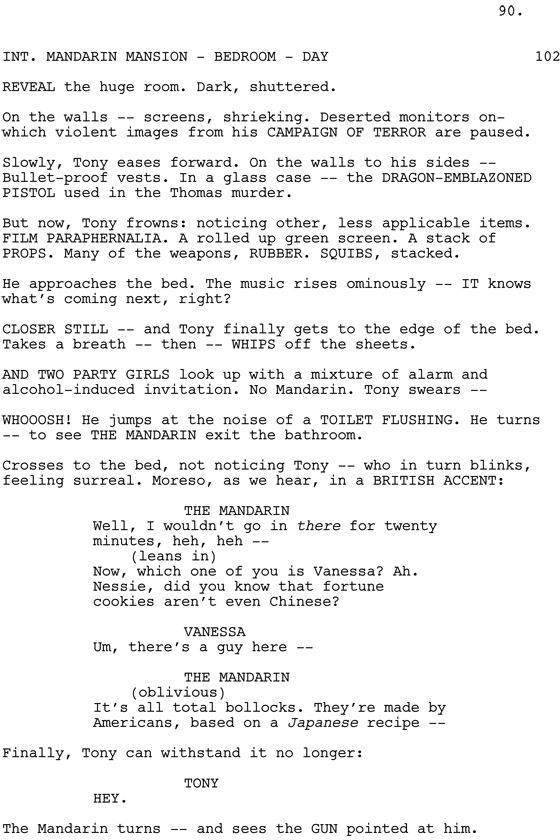 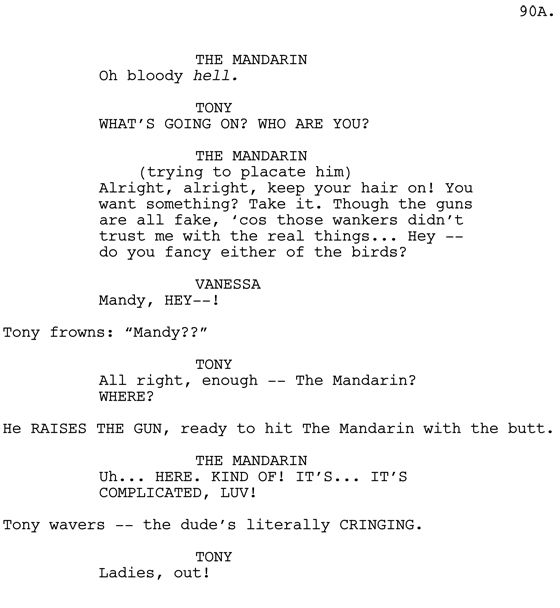 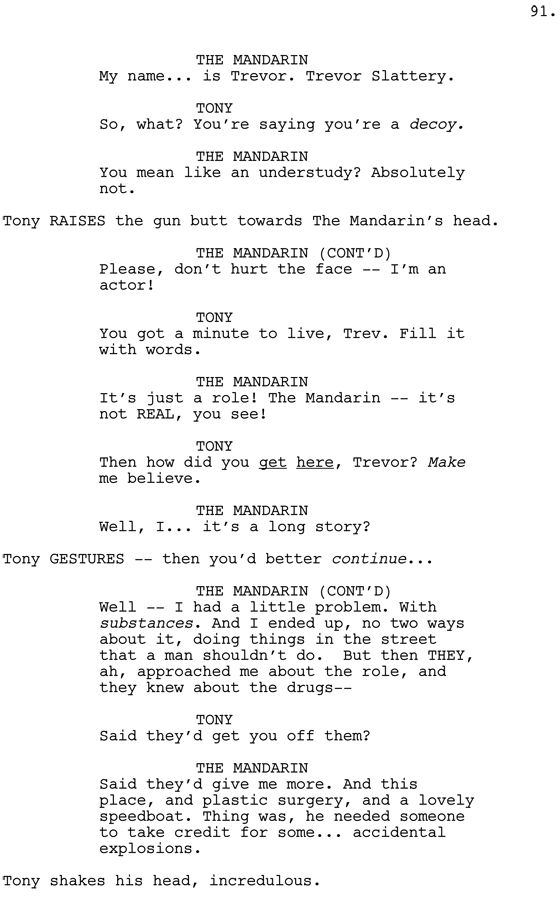