In this series, Vulture has been speaking to the screenwriters behind 2013’s most acclaimed movies about the scenes they found most difficult to crack. What pivotal sequences underwent the biggest transformations on their way from script to screen? Today, Kill Your Darlings scribe Austin Bunn (who co-wrote the script with director John Krokidas) recalls a sequence where young Allen Ginsberg (Daniel Radcliffe) must impress the friends he hopes to start a literary movement with, Lucien Carr (Dane DeHaan) and Jack Kerouac (Jack Huston). The scene is then excerpted below.

I remember listening to the first read-through of the script, four days before we started shooting, and thinking, We have a serious problem. Scene 45 — the dead center of the story, the moment when the young Allen Ginsberg reads his first poem from a boat adrift on the Hudson — was not working. More specifically, it wasn’t doing anything, and for the midpoint of a script, which is ostensibly going to propel the next 45 minutes of drama, that was a terrifying prospect.

While Daniel Radcliffe admirably worked his way through the dense stanzas of “Hymn to the Virgin” (“Thou who are afraid to have me, lest thou lose me, Great anodyne, thyself compound of pain … ”), I realized I had no idea what he was talking about. It sounded like a stuffy Victorian sonnet straining to impress. All those thous and lests and thyselves … There’s even a “sans” in there at one point. And just what who or what was “The Great anodyne”?

Part of the failure came from a sense of duty. I wrote the film with my college roommate John Krokidas, also the film’s director, about the Beat Generation artists we adored. In the research, I’d come across “Hymn to the Virgin” as the first complete Ginsberg poem, which he wrote days after the murder of David Kammerer in 1944 — the subject of our film. In fact, the subhead to the poem is “[David Kammerer to Lucien Carr].” It seemed ordained that we’d use it.

Except when you actually read it aloud — when you require a seemingly endless minute of everybody’s attention on it — it doesn’t seem to communicate much, and definitely not within our story of obsession, unrequited love, and the “uninhibited expression of the self” (or so says their manifesto).

Playwrights like to say that every scene needs an “event” in it — a pivot for the plot and for the characters’ development. This brief reading was supposed to be the proof of Allen’s talent, the origin point of what would become a lifelong friendship with Jack Kerouac, and his best shot at impressing the boy he’s in love with, the one sitting in the bow: Lucien Carr. What the hell would we replace it with?

That night, I dug through the Ginsberg journals, digging for a poem that we could get behind. And while the early work has strong sections, nothing felt quite right or relevant. And then it occurred to me that the poem couldn’t just be in there to win us the merit badge for accuracy. It needed to do some work dramatically.

There’s an adage about poetry by Marvin Bell, “A good poem listens to itself.” When I came across the line “You are not in wonderland” in one of Allen’s first pieces, I remembered we’d used the line “Allen in wonderland” earlier — credited to Lucien Carr — and suddenly an idea lodged in me: What if the poem Allen read echoed the world Lucien had introduced him to and refracted it? He would be a magpie, gathering up charged language and shaping it into art. Isn’t that what we loved about Allen to begin with? And what if, best of all, the poem was a chance for Allen to say to his best friend, “I know who you are”?

I pitched the idea to John, who was in rehearsal with the actors, and went about grabbing powerful phrases from several early poems, inserting the language earlier in the script to set it up and then knitting together what we now deemed a “first draft” Allen Ginsberg poem. Art gods, forgive me. I wonder what Allen would have made of our remix, but I think he would have appreciated the challenge. One of the most frustrating aspects I think of biopics is that too often a protagonist’s greatness is a given, what John always called the “greatest hits” version of history. We wanted to make the opposite: a film about young artists when their talent was raw, their futures uncertain, and the courage it takes to stand up in front of strangers to say something true. 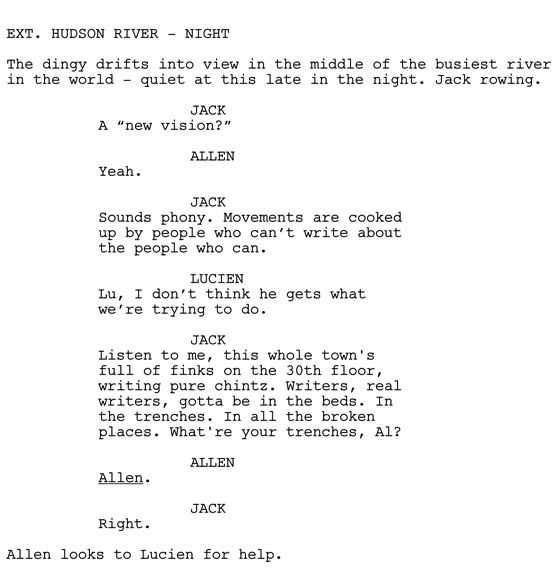 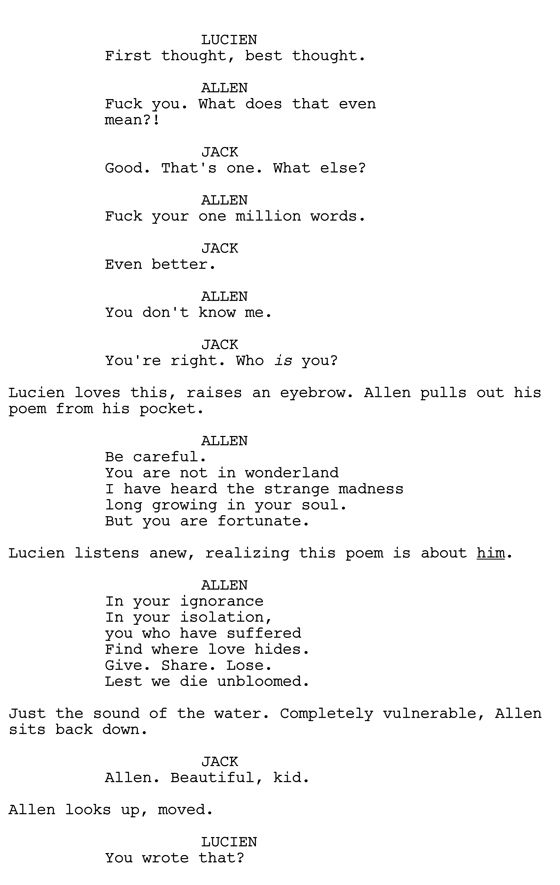 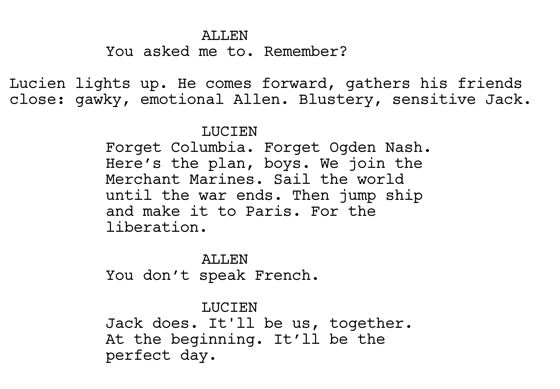 +Comments Leave a Comment
The Toughest Scene I Wrote: Kill Your Darlings