In this series, Vulture has been speaking to the screenwriters behind 2013’s most acclaimed movies about the scenes they found most difficult to crack. What pivotal sequences underwent the biggest transformations on their way from script to screen? Today, Saving Mr. Banks co-writer Kelly Marcel discusses a key scene wherein Mary Poppins author Pamela Travers (Emma Thompson), who’s frustrated by Walt Disney’s movie adaptation of her classic books, has something of a heart-to-heart with her driver, Ralph (Paul Giamatti).

Loads of scenes come to mind for this, but the one I would say was the most tricky is the scene between Pamela and Ralph where they’re building a little park together on the Disney lot. I had really struggled with finding a way to access Pamela for the audience, and using Ralph as a conduit for that was the way I decided to do it. This scene didn’t actually happen until late into writing the script, because Ralph didn’t exist until very, very late in the process. So it was tricky to drop his story line in and to find the places where he would allow us to see her differently.

In that scene, he reveals that he has a child who is handicapped, and I felt like, God, this could become really schmaltzy and heavy-handed and not truthful. So I probably rewrote that scene about twenty times, because every time he spoke and tried to explain his daughter to her, it came out as sort of manipulative, which Ralph isn’t at all. There’s also the fact that Pamela doesn’t really have a reaction to that, because she wouldn’t. Initially, when I first started writing the scene, she did react, and she did have a conversation about it. And it suddenly became incredibly schmaltzy! It was like, Oh God, ugggh.

Gradually, I just took all of her dialogue away from her, and just kept her literally only talking about the park and wanting to go home while this poor man is pouring his soul out. So it’s really tricky to write a scene where one person is exposing an enormous painful truth about his life, and the other person is responding with a completely different agenda. She is so unsympathetic, or so you think, because we reveal later that she did care. But she usually finds it impossible to empathize with people, and how can you not empathize when someone tells you his child is handicapped? It was really hard to find the balance.

I love that she gets on the ground and digs. That was Emma Thompson’s idea. We’d had it where she just gets down on her knees, but Emma said, “No, she should properly sit down on her ass on the ground.” And it was great, because just that physical act is a new way of seeing Pamela. We’ve seen her building these parks as a girl, but we haven’t seen the girl in Pamela. 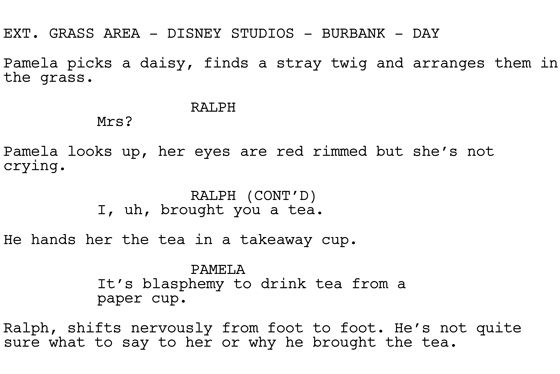 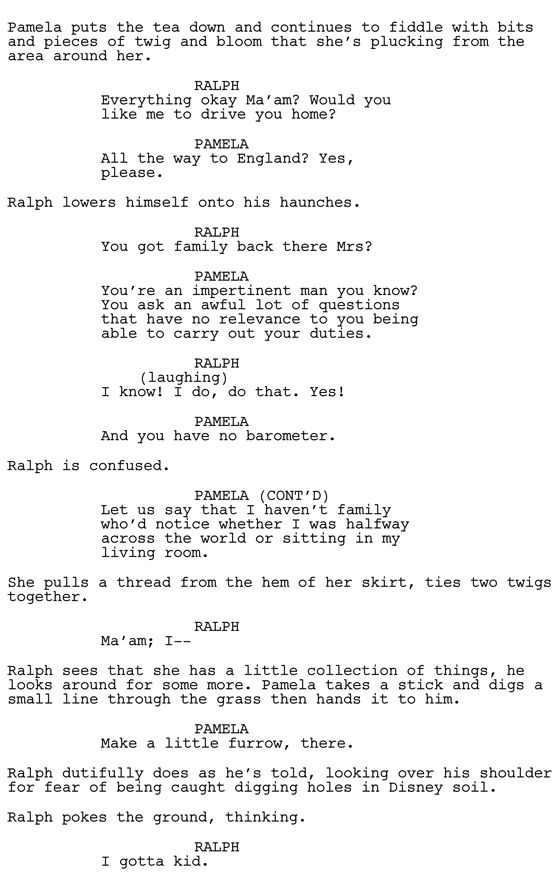 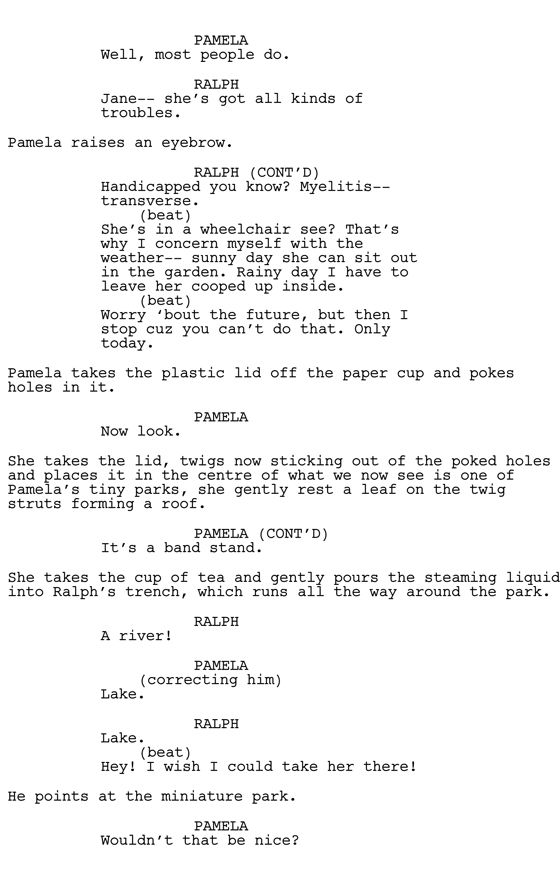 trailer mix 23 mins ago
Freak Out! Over New Bowie Footage in Moonage Daydream The first estate-approved David Bowie film featuring his music.
vulture picks 29 mins ago
26 Notable New Releases Over the Next Two Weeks Slow Burn returns, Stranger Things season four, Bon Iver at Forest Hills, and more.
trailer mix 10:22 a.m.
Mission: Impossible 7 Trailer — Tom Cruise Yelled at His Crew for This? The mission? Impossible. The reckoning? Dead. The part? One.
overnights 10:22 a.m.
90 Day Fiancé Recap: Everyone Is A Kid Again Have you ever seen so many couples become petty and immature so quickly?
in conversation 8:00 a.m.
Melanie Lynskey Felt Like a Hollywood Misfit After debuting at 17, the actress was lost in the industry. “I kept getting reminded I was not the things you needed to be.”
By E. Alex Jung
last night on late night Yesterday at 11:07 p.m.
Watch Lil Jon Give Musical Opinions on WWHL Is he Team Stallion or Team Cardi? Reba or Shania?
overnights Yesterday at 10:30 p.m.
Barry Recap: F– –k the Algorithm A solid but disjointed episode unveils an array of ghosts from the past.
theater review Yesterday at 9:55 p.m.
Who Killed My Father: Elegy Saturated With Cliché Édouard Louis’s memoir has been bizarrely and frustratingly staged.
overnights Yesterday at 9:01 p.m.
Gaslit Recap: Who’s Gonna Accept All This Watergate Blame Already? Just when things were going so well for John Dean …
overnights Yesterday at 9:00 p.m.
The Real Housewives of Atlanta Recap: Legs and Hips and Broadway The ladies and their men head to New York City at Kandi’s very characteristic invitation.
another one Yesterday at 7:00 p.m.
Kourtney Kardashian and Travis Barker Got Married (Again) (Again) Sealed with the Kris of approval.
obits Yesterday at 6:53 p.m.
Legendary Sci-fi Concept Artist Colin Cantwell Dead at 90 He designed the X-Wing, A-Wing, Star Destroyer, and TIE Fighter, and the Death Star’s trench.
goodbyes Yesterday at 4:12 p.m.
Pete Davidson Thanks Lorne Michaels in Final ‘Weekend Update’ Bit “Lorne accidentally gifted me a sock, so I’m free.”
overnights Yesterday at 2:18 p.m.
Saturday Night Live Season-Finale Recap: Natasha Lyonne Hosts a Good-bye Party A series of emotional send-offs overshadows the laughs in this season-ender.
cannes 2022 Yesterday at 9:39 a.m.
‘Irma Vep Is Not a Movie. Irma Vep Is a Concept.’ Director Olivier Assayas and his new star Alicia Vikander discuss remaking his beloved movie as a TV series (or whatever you want to call it).
goodbyes Yesterday at 2:49 a.m.
Aidy Bryant Says Good-bye to SNL With a Final Trend Forecast Alongside Bowen Yang.
goodbyes Yesterday at 1:32 a.m.
Kate McKinnon Bids Farewell to SNL, Ascends to Space “I always kind of felt like an alien on this planet anyway.”
second wedding May 21, 2022
Let Drew Barrymore and Paul Feig Make Bridesmaids 2, You Cowards Free puppies for everyone!
beloved May 21, 2022
Quinta Brunson’s Mom Didn’t Understand Her Job Until Abbott Elementary “I showed [my mom] a BuzzFeed video and she was like, ‘What is this?’”
fridge fixer May 21, 2022
Jeremy Strong Practiced His Dad Jokes on Anne Hathaway The two star as fictional versions of James Gray’s parents in Armageddon Time.
More Stories